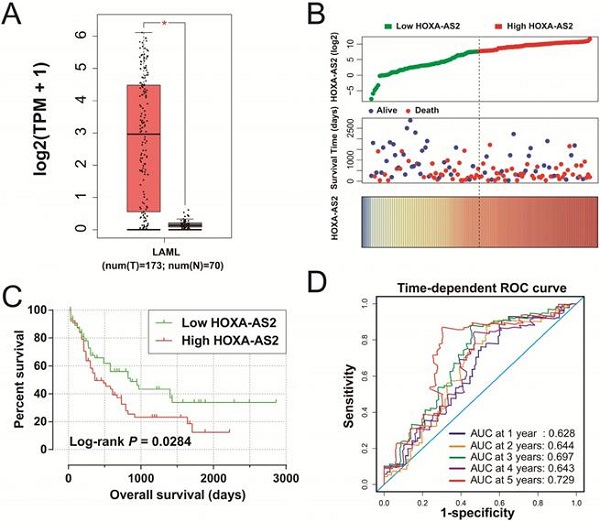 Conclusion: Our findings suggest that HOXA-AS2 is up-regulated in the bone marrow in patients with AML, and may serve as a novel prognostic biomarker for AML.

Acute myeloid leukemia (AML) is a clonal malignant disease of the hematopoietic system [1, 2]. The etiology of AML is closely related to genetic factors, and genetic variation plays an important role in its diagnosis, classification, risk prediction, precision treatment, and prognosis prediction [3-5]. The recent application of immunology, cytogenetics, molecular biology, and other technologies, has led to a deeper understanding of the biological characteristics of tumor cells in AML, which has in turn laid the foundations for the accurate classification, diagnosis, and prognostic prediction in AML, as well as for the selection of optimal treatment methods [6, 7].

Long non-coding RNAs (lncRNAs) play an important role in many biological activities, such as dose-compensation, epigenetic regulation, cell cycle regulation, and cell differentiation regulation, and are also associated with many diseases, including cancers and AML. LncRNA mainly functions via its secondary structure and binds to proteins, resulting in chromatin remodeling and affecting transcription factor function. In addition, lncRNAs can also bind to microRNAs, indirectly affecting mRNA expression, or can bind directly to mRNAs, affecting mRNA translation, shearing, and degradation processes. Numerous studies have shown that the lncRNA HOXA-AS2 plays an oncogenic role in a variety of cancers [8]. Dong and his coworkers demonstrated that HOXA-AS2 played a indispensable role in the resistance of AML cells to adriamycin and could thus be a potential target for adriamycin resistance in AML patients [9]. The Cancer Genome Atlas (TCGA) is an open access database containing a large number of tumor multi-omics high-throughput sequencing datasets, including AML [10]. The aim of the present study is to identify the prognostic value of HOXA-AS2 in AML, and to explore its potential molecular mechanisms using a TCGA genome-wide RNA sequencing dataset. We also aimed to screening of potential HOXA-AS2-targeted drugs in AML.

Expression distribution and prognostic value of HOXA-AS2 expression in AML

Box plots of HOXA-AS2 expression between bone marrow tissues of AML patients and healthy subjects were derived from the Gene Expression Profiling Interactive Analysis (GEPIA) website (http://gepia.cancer-pku.cn/index.html), based on the TCGA dataset and the GTEx (http://www.gtexportal.org/home/) projects [13]. Patients were divided into high- and low-HOXA-AS2-expression groups by the median expression value, and overall survival (OS) was compared between the two groups. The accuracy of HOXA-AS2 for predicting OS in patients with AML was evaluated using a time-dependent receiver operating characteristic (ROC) curve, and drawn by the survivalROC package (https://cran.r-project.org/web/packages/survivalROC/index.html) using the R platform [14, 15].

Molecular mechanisms and drug prediction of HOXA-AS2 in AML

Functional enrichment of HOXA-AS2 in AML 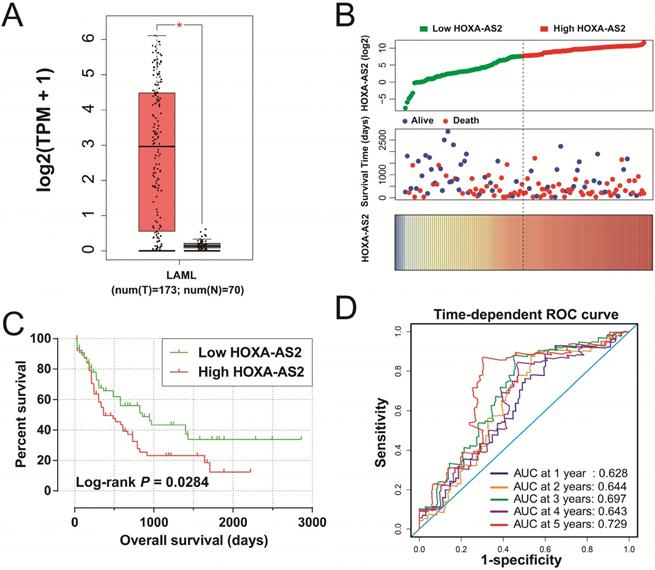 FDR in edgeR and GSEA were carried out according to the Benjamini-Hochberg approach [30-32]. The Kaplan-Meier curves of genes in AML were calculated using the log-rank test, in addition, survival package were used for hazard ratios (HRs) and 95% confidence intervals (CIs) calculation in the R platform. A P value <0.05 was considered significant. SPSS version 20.0 (IBM Corporation, Armonk, NY, USA) and R 3.5.0 (https://www.r-project.org/) were used for all statistical analyses.

Expression distribution and prognostic value of HOXA-AS2 expression in AML

We obtained box plots of HOXA-AS2 expression in bone marrow tissues of AML patients and healthy subjects using the GEPIA website, and showed that expression levels were significantly up-regulated in AML patients (Figure 1A). Survival analysis demonstrated that high expression of HOXA-AS2 was notably related to poorer OS in patients with AML (log-rank P=0.0284, HR=1.640, 95%CI=1.046-2.573) (Figure 1B, 1C). Time-dependent ROC curve analysis confirmed that HOXA-AS2 expression showed a high accuracy for predicting AML 5-year survival, with an area under the curve of 0.729 (Figure 1D).

Molecular mechanisms of HOXA-AS2 and drug prediction in AML

Volcano plot of DEGs in low- and high-HOXA-AS2-expressing AML patients. 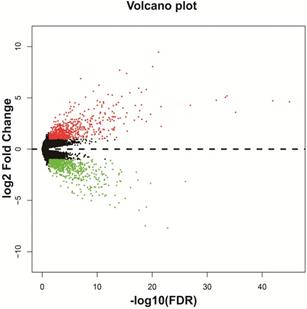 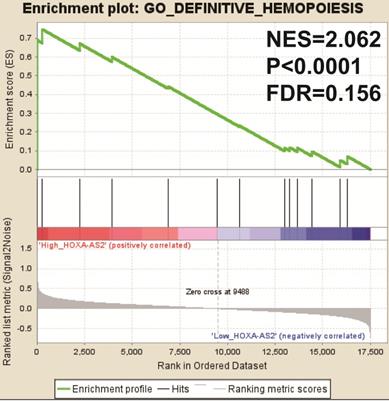 We further investigated the interactions among these DEGs using the WGCNA, STRING, and GeneMANIA approaches to construct interaction regulatory networks (Figures 5, 6, and 7, respectively). The soft threshold distribution plot and module clustering plot of WGCNA analysis are shown in Figure S3A-D. The highest degree DEGs in the WGCNA network were PCDH17 and RNF182, with a degree of 55. These analyses demonstrated that these DEG had complex co-expression interaction relationships. We also performed a CMap analysis to predict potential HOXA-AS2-targeted therapeutics for AML. Using CMap analysis, we screened three small-molecule drugs, megestrol, carmustine, and cefoxitin, which could be used as targeted therapy for HOXA-AS2 in AML. PubChem (https://pubchem.ncbi.nlm.nih.gov/) provides the chemical structures of these targeted drugs [33, 34] (Figure 8A-C) and the detailed results of the CMap analysis are summarized in Figure 8D. We then used the online search tool for interactions of chemicals (STITCH; http://stitch.embl.de) [35, 36] to construct drug-protein interaction networks for these three drugs (Figure 9). By matching the drug-related genes and DEGs, four DEGs appeared in these three drug regulatory networks. We therefore concluded that carmustine may play a role in AML patients with high HOXA-AS2 expression levels by regulating these four DEGs: glial cell derived neurotrophic factor (GDNF), catalase (CAT), nitric oxide synthase 2 (NOS2), and dickkopf WNT signaling pathway inhibitor 1 (DKK1). By analyzing the connectivities of these four genes in the WGCNA network, we found that the DKK1 gene had a high degree of 50 in the WGCNA network, with high connectivity and regulation ability. However, the remaining three genes had lower degrees in the network, suggesting that carmustine was likely to exert its therapeutic effect in AML mainly by regulating DKK1.

Functional enrichment of HOXA-AS2 in AML 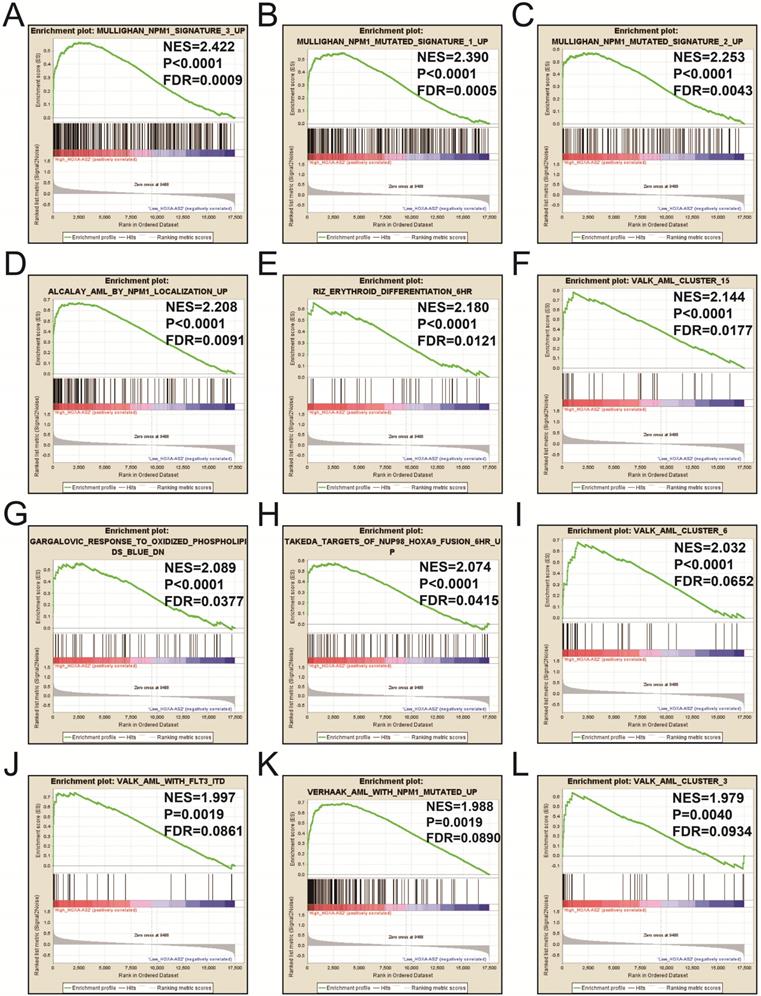 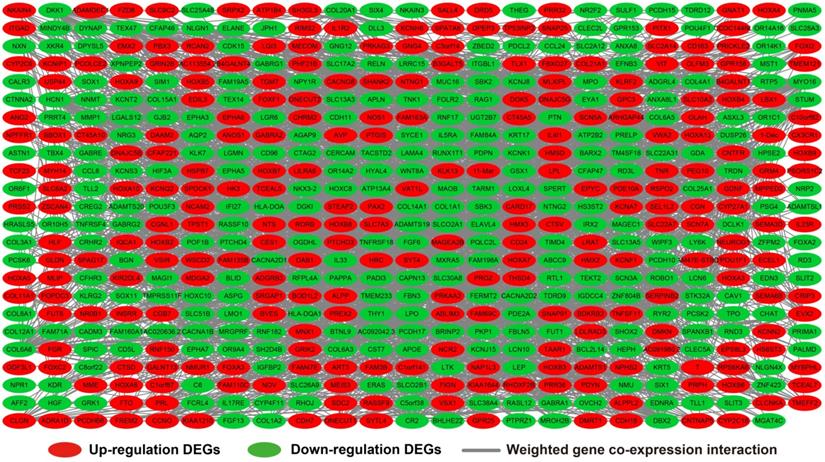 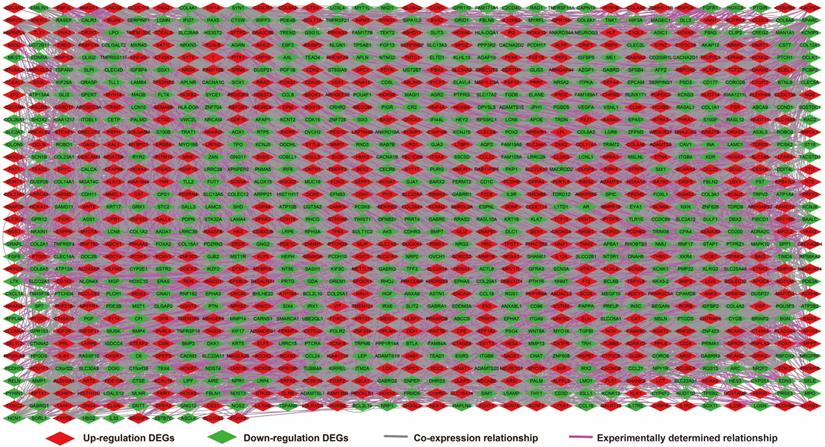 Regarding its molecular mechanism in cancers, HOXA-AS2 promoted proliferation and induced epithelial-mesenchymal transition (EMT) via the miR-520c-3p/glypican-3 axis in hepatocellular carcinoma [50], the miR-520c-3p/S100 calcium-binding protein A4 (S100A4) axis in papillary thyroid cancer [43], and the miR-520c-3p/transforming growth factor beta receptor 2/RELA (RELA proto-oncogene, NF-κB subunit) axis in breast cancer[40]. Dong et al. also demonstrated that the HOXA-AS2/miR-520c-3p/S100A4 axis participated in the regulation of adriamycin resistance in AML, and that HOXA-AS2 expression was enhanced in bone marrow tissues of AML patients after treatment with adriamycin-based chemotherapy [9]. In addition, HOXA-AS2-induction of EMT through miR-520c-3p was also observed in osteosarcoma [45]. HOXA-AS2 also mediated the EMT pathway for oncogene function in colorectal cancer [48] and gallbladder carcinoma [47]. Regarding other important molecular mechanisms, HOXA-AS2 promoted cell proliferation through the HOXA-AS2/enhancer of zeste homolog 2 (EZH2)/cyclin-dependent kinase inhibitor 1A (also known as P21), polo-like kinase 3, DNA damage-inducible transcript 3 axis in gastric cancer [39], the HOXA-AS2/EZH2/lysine-specific demethylase 1 (LSD1) in pancreatic cancer [38], and the HOXA-AS2/EZH2 and LSD1/P21 and Kruppel-like factor 2 axis in colorectal cancer [49]. Gao et al. suggested that HOXA-AS2 achieved its oncogenic function and angiogenesis in gliomas via the miR-373/epidermal growth factor receptor (EGFR)/VE-cadherin, matrix metallopeptidase 2 (MMP2) and MMP9/PI3K-Akt signaling pathway axis [42]. Furthermore, Wang et al. demonstrated that HOXA-AS2 regulated the function of oncogenes in bladder cancer by regulating the HOXA-AS2/miR-125b/SMAD family member 2 axis, and was involved in the regulation of migration, invasion, and stemness of bladder cancer cells. HOXA-AS2 regulated the HOXA-AS2/miR-520a-3p/homeobox D8 and mitogen-activated protein kinase kinase kinase 2 axis in non-small lung cancer [46], and the miR-15a-5p/homeobox A3 (HOXA3) axis in papillary thyroid cancer [44]. Zhao et al. reported that HOXA-AS2 regulated the HOXA3/EGFR/Ras/Raf/MAPK kinase/ERK pathway to reduce the sensitivity of glucocorticoids in acute lymphoblastic leukemia [54]. In the present study, we performed enrichment analyses of DEGs in AML patients with different expression levels of HOXA-AS2, which also demonstrated that HOXA-AS2 plays an essential role in AML via the PI3K-Akt, ERK, and MAPK pathways regulation, as well as by affecting cell adhesion, cell differentiation, cell migration, angiogenesis, and cell proliferation biological processes. These results are consistent with previous studies. In addition, we also found that the DEGs were enriched in the Wnt, Notch, cell-adhesion molecules, and integrin-mediated signaling pathways, which represent previously unreported associations with HOXA-AS2 regulatory mechanisms. The HOXA-AS2-co-expressed PCGs identified in the present study were enriched in the NF-κB signaling pathway. Relationship between HOXA-AS2 and NF-κB has been reported previously. Zhu et al. reported that HOXA-AS2 was take part in osteogenesis via regulating NF-κB pathway in mesenchymal stem cells [55], and another study found that HOXA-AS2 was involved in inhibiting endothelial inflammation by regulating the NF-κB pathway [37]. 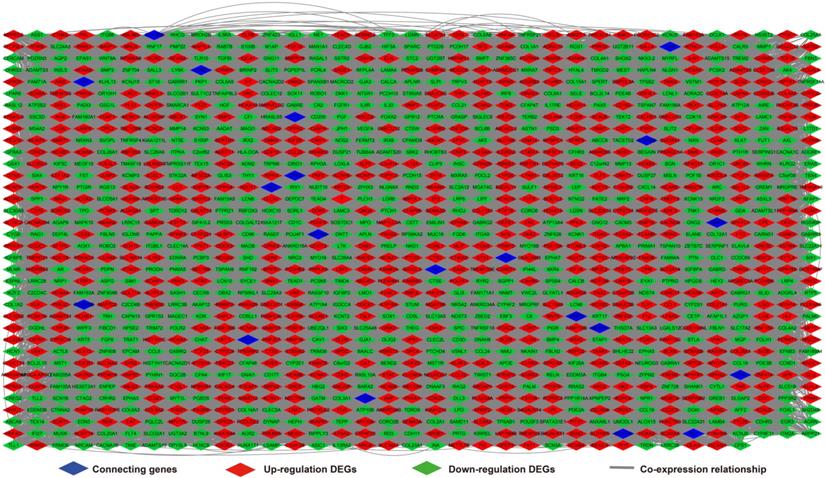 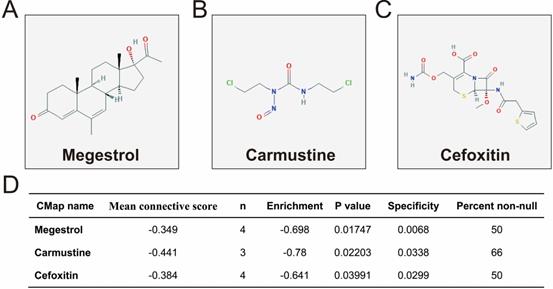 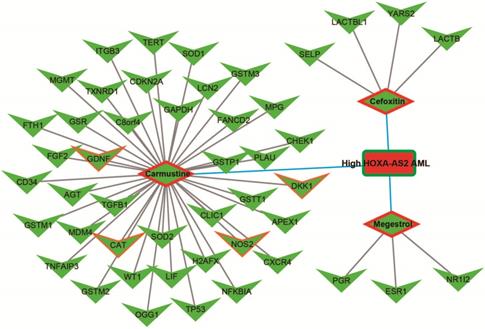 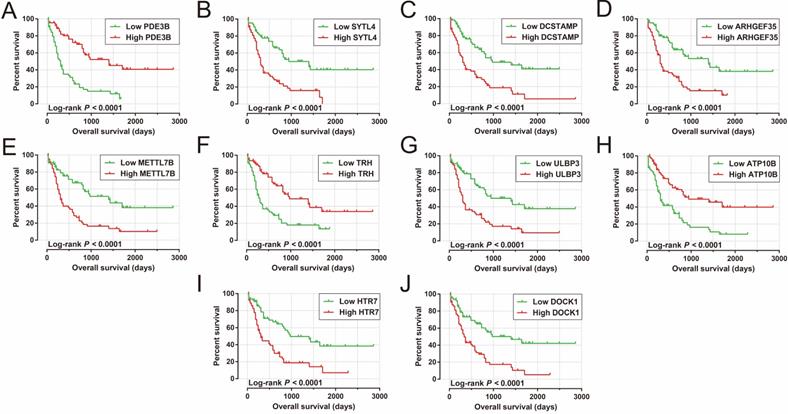 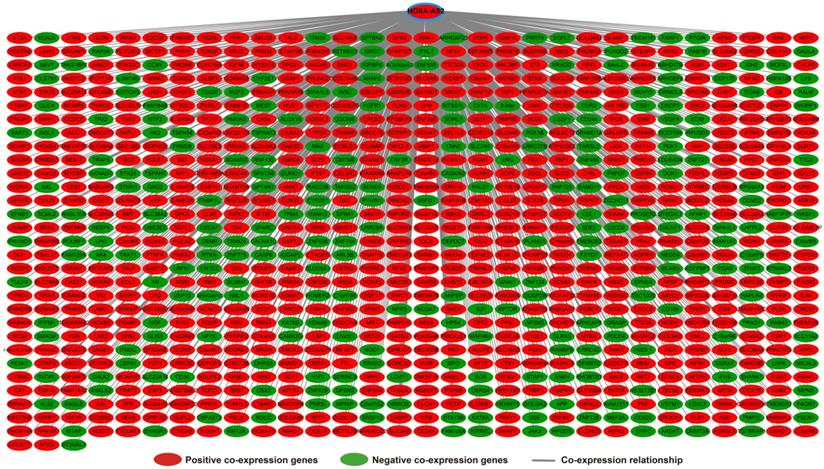 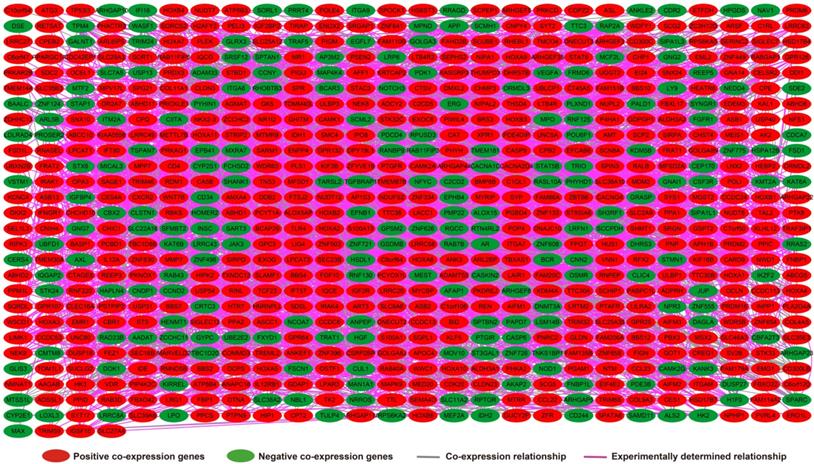 Of these three HOXA-AS2-targeted drugs used in AML, carmustine is a broad-spectrum anticancer drug with good curative effect in patients with Hodgkin's disease [56] and AML [57, 58], as well as some curative effect in patients with breast cancer [59], lung cancer [60], brain cancer [61, 62] and brain metastasis [63, 64]. Carmustine can be used to treat elderly or comorbid patients with AML, as well as post-transplant acute leukemia in patients with non-Hodgkin's and Hodgkin's lymphoma [57, 58]. As is well-known, no studies have revealed the use of cefoxitin for the treatment of AML, but cefoxitin was used to treat colon tumorigenesis induced by the human commensal enterotoxigenic Bacteroides fragilis in mice [65]. Megestrol acetate can be used to treat advanced endometrial cancer [66], and has also demonstrated an effect in advanced renal cell carcinoma [67-69], and was shown to improve the appetite in patients with advanced cancer [70, 71]. However, a review of the literature found no relevant reports of megestrol for AML treatment. Thus, although the present study identified three potential HOXA-AS2-targeted drugs, only carmustine has been reported to show efficacy for the treatment of AML. 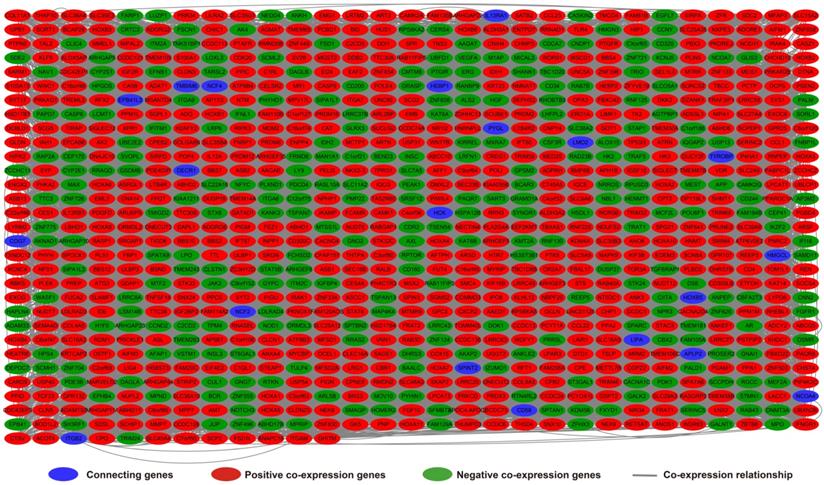 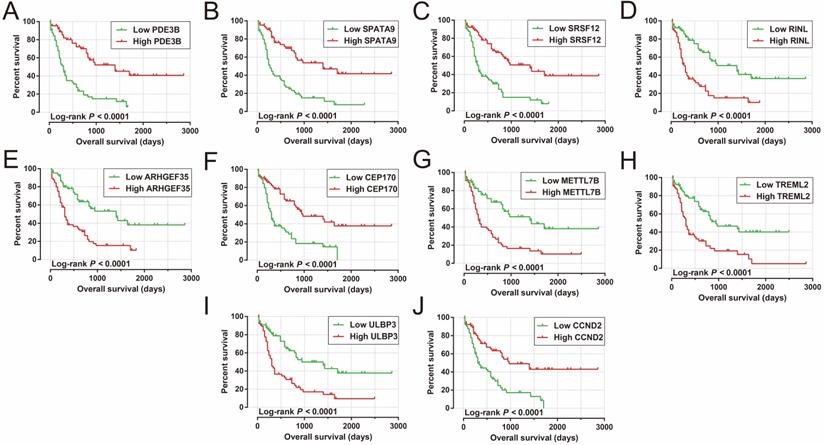 This study had some limitations. This was a single-cohort study based on the TCGA dataset, and additional independent cohorts are required to verify our results. Second, although we performed functional enrichment analyses to investigate the potential molecular mechanisms of HOXA-AS2 in AML using multiple bioinformatics tools, in vivo and in vitro experiments are needed to confirm these findings. Third, the small-molecule HOXA-AS2-targeted drugs screened using the AML whole genome dataset and CMap tool need further experimental verification. Despite these limitations, the present study found that HOXA-AS2 could be a prognostic indicator for AML. In addition, we also used a genome-wide dataset of AML bone marrow tissues to explore the molecular mechanisms of HOXA-AS2 in AML, and screened out three potential small-molecule targeted drugs. These findings thus provide a theoretical basis for further investigations of the functions and mechanisms of HOXA-AS2 in AML.

Our study provides the first evidence for the use of HOXA-AS2 as a prognostic marker for AML, with high HOXA-AS2 expression related to a poor prognosis in AML patients. Our findings also suggested that HOXA-AS2 levels may be significantly up-regulated in the bone marrow tissues of AML patients compared with healthy subjects. Using multiple bioinformatics analysis tools, we determined the potential molecular mechanisms of HOXA-AS2 in AML, and screened out three small-molecule drugs (megestrol, carmustine, and cefoxitin) as potential HOXA-AS2-targeted therapeutic agents in AML patients. We also identified multiple genes associated with AML prognosis. However, further studies were required to verify these findings.

This work was supported in part by the National Natural Science Foundation of China (No.81160075); Natural Science Foundation of Guangxi (No.0728124); Self-raised Scientific Research Fund of the Ministry of Health of Guangxi Province (Z2014035). The authors thank the contributors of The Cancer Genome Atlas (https://portal.gdc.cancer.gov/) for their contribution to share the AML dataset on open access. In addition, we also would like to acknowledge the helpful comments on this paper received from our reviewers.