Ki-67 is a nuclear antigen widely used in routine pathologic analyses as a tumor cell proliferation marker for lung cancer. However, Ki-67 expression analyses using immunohistochemistry (IHC) are invasive and frequently influenced by tissue sampling quality. In this study, we assessed the feasibility of noninvasive magnetic resonance imaging (MRI) in predicting the Ki-67 labeling indices (LIs). A total of 51 lung cancer patients, including 42 non-small cell lung cancer (NSCLC) cases and nine small cell lung cancer (SCLC) cases, were enrolled in this study. Quantitative MRI parameters from conventional diffusion-weighted imaging (DWI), intravoxel incoherent motion (IVIM), and diffusion kurtosis imaging (DKI) were obtained, and their correlations with tumor tissue Ki-67 expression were analyzed. We found that the true diffusion coefficient (D value) from IVIM was negatively correlated with Ki-67 expression (Spearman r = -0.76, P < 0.001). The D values in the high Ki-67 group were significantly lower than those in the low Ki-67 group (0.90 ± 0.21 × 10-3 mm2/s vs. 1.22 ± 0.30 × 10-3 mm2/s). Among three MRI techniques used, D values from IVIM showed the best performance for distinguishing the high Ki-67 group from low Ki-67 group in receiver operating characteristic (ROC) analysis with an area under the ROC curve (AUROC) of 0.85 (95% CI: 0.73-0.97, P < 0.05). Moreover, D values performed well for differentiating SCLC from NSCLC with an AUROC of 0.82 (95% CI: 0.68-0.90), Youden index of 0.72, and F1 score of 0.81. In conclusion, D values were negatively correlated with Ki-67 expression in lung cancer tissues and can be used to distinguish high from low proliferation statuses, as well as SCLC from NSCLC.

Lung cancer was the most frequently diagnosed cancer and the leading cause of cancer death among males in 2012 [1]. Lung cancer survival rates are poor, with five-year survival rates of less than 20% [2]. Ki-67 is a nuclear antigen present in most proliferating cells. Ki-67 is expressed during the active phases of the cell cycle, including the G1, G2, and S phases, and is a common marker used to detect tumor cell proliferation related to tumor invasiveness and prognoses. The Ki-67 labeling index (LI) has been widely used to predict the prognoses of breast cancer [3], glioma [4], and lung cancer [5]. A meta-analysis demonstrated that high Ki-67 expression is associated with poor prognoses and disease progression in lung cancer patients. Ki-67 has been used as an independent biologic marker to predict lung cancer patient prognoses [6]. However, the quantification of Ki-67 expression using immunohistochemistry (IHC) is invasive and frequently influenced by tissue sampling quality [7].

The application of magnetic resonance imaging (MRI) to lung cancer analyses is a relatively recent development yet is a rapidly growing field. Apparent diffusion coefficient (ADC) values derived from diffusion-weighted imaging (DWI) can reflect tumor cellularity. In recent years, ADC values were reported to be associated with Ki-67 expression in various tumors, such as breast cancer [8, 9], endometrial stromal sarcoma of the uterus [10], endometrial carcinoma [11], and lung cancer [12]. However, ADC values are calculated using a mono-exponential model that is affected not only with the molecular movements of water but also by capillary microcirculation [13].

This prospective study was approved by the Clinical Research Ethics Committee of Huadong Hospital, Fudan University. All procedures performed in studies involving human participants were in accordance with the ethical standards of the institutional and/or national research committee and with the 1964 Helsinki Declaration and its later amendments or comparable ethical standards. Informed consent was obtained from all individual participants involved in the study.

From September 2016 to August 2018, patients who met the following criteria were included: (1) pulmonary nodule or mass diameters larger than 15 mm as detected by computed tomography (CT); (2) >50% of the tumors were solid; (3) Ki-67 tumor expression was available; (4) no previous treatments were given before MR examinations. The exclusion criteria were: (1) MRI contraindications present (n = 13); (2) unsatisfactory image qualities with server motion or distortion artifacts (n = 9); (3) A lack of pathologic results (n = 8). A total of 51 lung cancer patients were finally enrolled in this study, with 42 NSCLC and 9 SCLC patients. The characteristics of the enrolled patients are shown in Table 1.

where S(b) represents the signal intensities at a specified b value, and S0 represents the signal intensities measured without radiofrequency saturations. Tumor regions of interest (ROIs) were drawn by outlining the tumor borders on ADC maps and showing the largest cross-section of the tumors. Necrotic areas and adjacent large vessels were avoided. Then the software-generated mean ADC values were recorded.

Two radiologists (with 6 and 10 years of experience in MRI, respectively), who were blinded to the pathologic results, drew ROIs on the ADC maps and recorded the values of each parameter independently. The ROIs were automatically copied from the ADC maps to the corresponding IVIM-DKI parametric maps to obtain the values of D, D*, f, Dapp, and Kapp. Each lesion ROI was drawn twice and averaged to a mean value for analyses.

All DWI parameters were performed using a prototype Body Diffusion Toolbox (Siemens Healthcare, Erlangen, Germany). We selected 9 b-values (0, 20, 60, 80, 150, 200, 400, 600, and 800 s/mm2) to calculate DWI and IVIM parameters with the mono- and bi-exponential models, respectively. Six b-values (b = 0, 600, 800, 1200, 1600 and 2000 s/mm2) were selected for the DKI parameter calculations. The two blinded radiologists performed the following measurements. Tumor regions of interest (ROIs) were drawn by outlining tumor borders on ADC maps, showing the largest tumor cross-sections, and avoiding necrotic areas and adjacent large vessels by referring to T2WI and DWI images. The same ROIs were automatically copied to the D, D*, f, Dapp, and Kapp maps at the same level. All DWI parameters were measured synchronously.

The immunohistochemical (IHC) analyses of Ki-67 expression were performed using the mouse monoclonal anti-human Ki-67 antibody (MIB-1, ZSGBBIO, Beijing, China). A pathologist with 14 years of experience in lung cancer pathology, blinded to the clinical and MRI data, assessed Ki-67 tumor expression. The percentage of Ki-67-positive cells was assessed by counting the number of stained nuclei per 100 tumor cells in the most representative areas (×400), corresponding to areas with the highest mitotic activity. Then, Ki-67 expression levels were divided into low (≤25%) and high (>25%) Ki67 expression groups, based on previous studies [24-26].

Statistical analyses were conducted using SPSS 22.0 (IBM SPSS Statistics, USA) or GraphPad Prism 8.0 (Prism, USA) software. Quantitative data were expressed as the mean ± standard deviation (SD) or median and interquartile ranges based on the distribution. The interclass correlation coefficient (ICC) was used to evaluate reader reproducibility for parameter measurements (0.00-0.20, poor correlation; 0.21-0.40, fair correlation; 0.41-0.60, moderate correlation; 0.61-0.80, good correlation; and 0.81-1.00, excellent correlation). The correlations between the DWI-derived parameters and Ki-67 expression were analyzed using Spearman's rank correlations. The differences in DWI parameters between low and high Ki-67 expression and between SCLC and NSCLC were analyzed with a Student's t-test or Mann-Whitney U-test. Receiver operating characteristic (ROC) curve analyses were performed to determine the optimal cut-off values of these parameters for predicting high Ki-67 expression levels and lung cancer subtypes. The area under the ROC curve (AUCROC), sensitivity, specificity, Youden index, and F1 score were calculated. A P < 0.05 was considered statistically significant.

Characteristics of patients in this study

Data are number and percentage or mean and standard deviation (SD). A two-sample proportion Z-Test was conducted to compare the differences between categorical variables.

DWI images and ADC, IVIM, and DKI maps of lung tumors in patients with NSCLC and SCLC 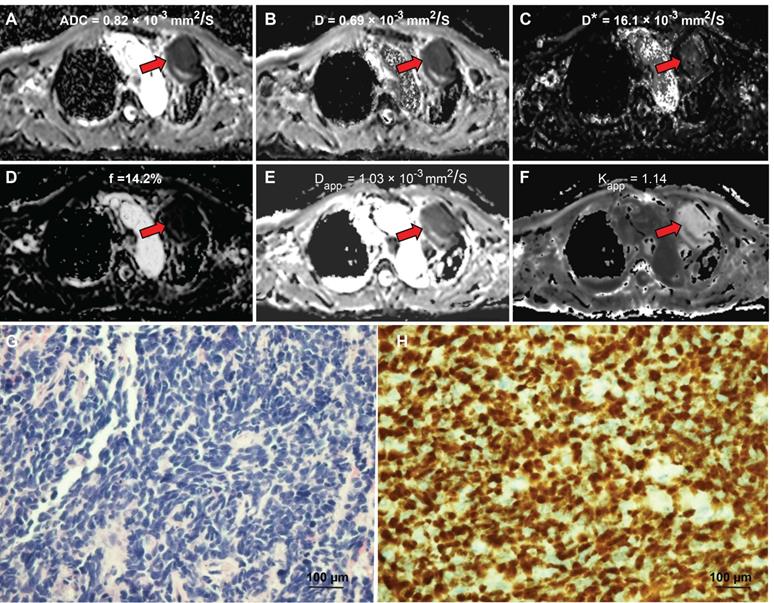 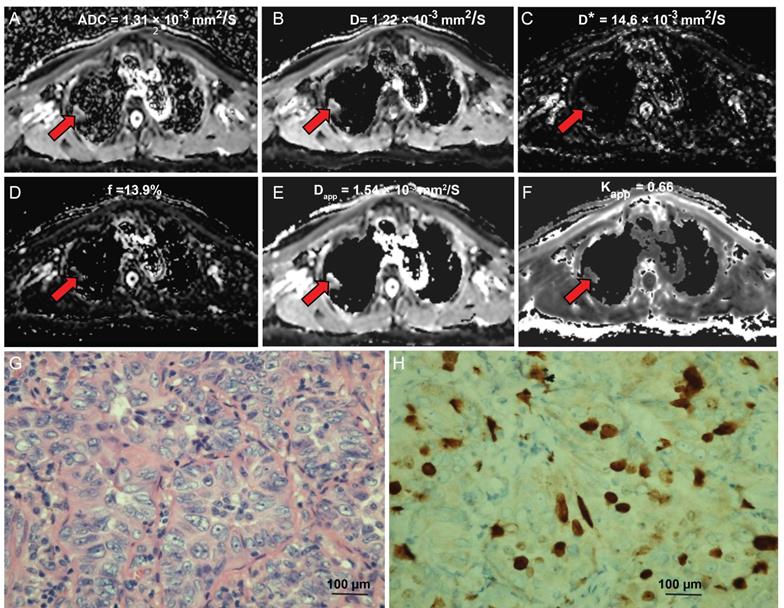 Differentiating SCLC from NSCLC (large cell carcinoma or basaloid squamous cell carcinoma) using noninvasive methods is essential since the therapeutic strategies and clinical prognoses are significantly different. Several noninvasive blood metabolomic and dynamic multiphase computed tomography (CT) methods have been recently developed to discriminate SCLC and NSCLC [27-30]. However, blood metabolomic biomarker results that showed the differentiation of SCLC and NSCLC tumor types has not been confirmed with large cohort studies. Dynamic multiphase CT was shown to distinguish SCLC and NSCLC by evaluating tumor perfusion; however, significant radiation exposures restrict the use of this methodology. As a noninvasive, reusable technique, quantitative MRI is frequently used for tumor evaluations. In this study, we demonstrated for the first time that D values from IVIM had excellent accuracy in distinguishing NSCLC and SCLC.

Ki-67 is a common biomarker of tumor cell proliferation and has been shown to be associated with lung cancer prognoses and therapeutic efficacies [5, 31-33]. In this study, we evaluated the associations between the DWI, IVIM, DKI parameters, and Ki-67 proliferation in tumor tissues of patients with lung cancer. We selected a cut-off of 25% for Ki-67 expression to differentiate the low and high Ki-67 groups [34]. We found that D values from IVIM were negatively correlated with Ki-67 expression (Spearman's coefficient r = -0.76). D values between the high and low Ki-67 expression groups were significantly different. It is likely that the highly proliferative tumors (high Ki-67 expression) had higher inner structural complexities due to increased cellularity, vascular hyperplasia, and necrosis [23].

Although Dapp is corrected for non-Gaussian bias, it showed no significant correlation with Ki-67 expression. This might be due to tumor heterogeneity caused by vascular proliferation and internal necrosis. D* and f are IVIM perfusion-related parameters. No significant correlations were found between the D* or f values and Ki-67 expression in lung cancer, consistent with previous bladder cancer and sinonasal tumor studies [17, 18]. These results indicated that extracellular components, such as average blood velocities, blood microcirculation, and capillary volumes, contributed little to lung tumor aggressiveness. In addition, we found poor D* and f value reproducibilities in lung cancer imaging, which might explain their low diagnostic performance in differentiating high and low Ki-67 groups.

D represents the true molecular diffusion of water without adsorption [14]. In our study, D values performed well to identify lung tumors with high Ki-67 expression. Our results suggest that water molecule diffusion is affected more by tumor proliferation than by the complexity of the tumor microenvironment.

Previous studies [35, 36] have reported that ADC values were significantly different between SCLC and NSCLC. Our study found that ADC, D, and Dapp values of SCLC were dramatically lower than those of NSCLC. The potential histopathologic rationale might be that SCLCs are highly cellular, and the cells have large nuclei with scant cytoplasm; all of these factors could restrict diffusion motion reducing ADC, D, and Dapp values [37]. As mentioned above, D* and f values were poorly repeatable. D* values were also related to blood flow velocities. The high variability of D* values could result from the dramatic differences in tumor vascularities among different tumor types [17]. The f values are affected by the T2 contributions in both the perfusion and pure molecular diffusion compartments. Therefore, measuring IVIM D values could be used as a noninvasive approach to distinguish SCLC and NSCLC.

Our study had several limitations. First, the distribution of lesion types was uneven, and the number of patients with SCLC was relatively small compared with the number of patients with NSCLC. When the dataset was unbalanced, traditional classification metrics, such as AUROCs and sensitivities, might be overfitted. The F1 score is the weighted average of precision and recall; data distribution is considered and particularly suitable for unbalanced datasets [38]. Although the F1 score is acceptable for our analyses, further validations with other independent cohorts are still required. Second, ROIs drawn on the parametric maps might not correspond well with the Ki-67 expression in histologic specimens. MR-guided biopsies could solve this problem. Third, the optimal b-value combination for lung IVIM and DKI analyses was unclear. Adding more b values could improve fitting accuracies, improving IVIM or DKI parameter performance predictions. However, acquisition times would be increased accordingly.

SL and GL designed and guided the work. YZ, WH, XZ, CL, and CF participated in the work and analyzed the patient data. YZ performed MRI examinations. YZ and WH were major contributors in writing the manuscript. XZ, CL, and CF contributed to Language polishing. YZ and WH contributed equally to this article as the co-first authors. All authors read and approved the final manuscript.

This study was supported by the General Project from Shanghai Municipal Health Bureau (CN) (201940174).