Wild chrysanthemum was first recorded as a Traditional Chinese Medicine (TCM) in Shennong's Classic of Materia Medica (anonymous, Han dynasty). During the Ming and Qing dynasties, it was primarily applied externally for the management of abscesses or deep-rooted boils. The clinical applications have greatly expanded over thousands of years. It is widely accepted that the major actions of Wild chrysanthemum are heat-clearing and detoxicating; fire-purging and liver-pacifying [1]. In modern TCM textbooks, Wild chrysanthemum is classified as a Heat-clearing and detoxicating TCM - the most frequently used category in the treatment of cancerous tumors [2]. With the development of modern TCM pharmacology, Chinese experts discovered that Wild chrysanthemum contains many flavonoid compounds; and total flavonoids Chrysanthemum (TFC) are the major ingredients of Wild chrysanthemum [3]. Herbal flavonoids have attracted the attention of the cancer research community and a number of literature report that TFC has anti-cancer potency [4].

22 h post-fertilization (hpf) fli1a-EGFP transgenic zebrafish were used to assay angiogenesis in vivo. In short, 200μg/mL WCWE was given to the larvae via fish water for 26 h and the larvae at 48 hpf were used for the angiogenesis assay. The positive control was 5μg/ml PTK 787 (Vatalanib, Selleckchem, USA, batch number: S110102). The vehicle control was 0.1% DMSO (comparable to fish water). Zebrafish angiogenesis assay details were the same as we described in our previous published article [5] and the experiments are repeated here. The ethics committee of the Teaching Hospital of Chengdu University of TCM approved all experiments and the zebrafish care complied with the ARRIVE guidelines.

The zebrafish received WCWE for the angiogenesis assay at 48 hpf, then homogenized; and the homogenates were used for mRNA Seq. The mRNA Seq was completed by the Shanghai KangChen Bio-tech Company, Shanghai, China. RNA was extracted by using Trizol kits (Invitrogen, USA). Extracted total RNA was characterized and quantified with agarose electrophoresis and a Nanodrop ND-1000 spectrophotometer (Thermo Fisher Scientific, Waltham, MA, USA). The mRNA was enriched by oligo(dT) and the rRNA was removed. Libraries were completed with the KAPA Stranded RNA-Seq Library Prep Kit Illumina (KK8400, USA, San Diego), which included a randomly primed 1st strand cDNA synthesis and a dUTP based 2nd strand cDNA synthesis. The sequencing library was determined by an Agilent 2100 Bioanalyzer (G2938C, Agilent USA Santa Clara) and quantified with a qPCR assay. A mRNA‑Seq was conducted with an Illumina Hiseq 4000 (Illumina Hiseq USA, San Diego).

The total RNA of zebrafish homogenates were extracted with a Trizol reagent and reverse transcribed with SuperScript III according to the manufacturer's instructions. A qRT-PCR was performed using a ViiA 7 Real-time PCR System. GAPDH was used as an internal control. Each PCR reaction mixture contained MgSO4, dNTP mixture, taq, and SYBR green. The primers used to amplify the genes were as follows:

The sample was ground by liquid nitrogen into cell powder and then transferred to a 5-mL centrifuge tube. After that, four volumes of lysis buffer were added to the cell powder, followed by sonication three times on ice using a high intensity ultrasonic processor (Scientz). The lysis buffer contained: 8 M urea (Sigma, Saint Louis, USA, item number: V900119-500G); 1% Triton-100; 10 mM dithiothreitol (Sigma, item number: D9163-5G); and a 1% Protease Inhibitor Cocktail (Calbiochem, Billerica, USA, item number: 535140-1ML). The remaining debris were removed by centrifugation at 20,000 g at 4 °C for 10 min. Finally, the protein was precipitated with cold 20% TCA for 2 h at -20 °C. After centrifugation at 12,000 g 4 °C for 10 min, the supernatant was discarded. The remaining precipitate was washed with cold acetone for three times. The protein was redissolved in 8 M urea and the protein concentration was determined with a BCA kit according to the manufacturer's instructions.

For digestion, the protein solution was reduced with 5 mM dithiothreitol for 30 min at 56 °C and alkylated with 11 mM iodoacetamide (Sigma, item number: V900335-5G) for 15 min at room temperature in darkness. The protein sample was then diluted to a urea concentration less than 2M. Finally, trypsin (Promega, Madison, USA. Item number: V5111) was added at 1:50 trypsin-to-protein mass ratio for the first digestion overnight and 1:100 trypsin-to-protein mass ratio for a second 4 h-digestion.

The peptides were subjected to NSI source followed by tandem mass spectrometry (MS/MS) in Q ExactiveTM Plus (Thermo) coupled online to the UPLC. The electrospray voltage applied was 2.0 kV. The m/z scan range was 350 to 1000 for full scan, and intact peptides were detected in the Orbitrap at a resolution of 35,000. Peptides were then selected for MS/MS using NCE setting at 27 and the fragments were detected in the Orbitrap at a resolution of 17,500. A data-independent procedure that alternated between one MS scan followed by 20 MS/MS scans was applied. Automatic gain control (AGC) was set at 3E6 for full MS and 1E5 for MS/MS. The maximum IT was set at 20 ms for full MS and auto for MS/MS. The isolation window for MS/MS was set at 2.0 m/z.

A Waters e2695 HPLC and Photodiode array detector were used to assay the chromatographic peaks of WCWE. The chromatographic column was an Agilent ZORBAX SB-C18, 4.6×250mm, 5μm; the wave length was 270nm; the column temperature was 30℃; the flow velocity was 1.0 ml/min. The gradient elution was conducted with a mobile phase A (methyl alcohol) and a mobile phase B (1% glacial acetic acid).

All data was presented as a mean ± standard deviation (SD). A Graphpad Prism 5.0 software (GraphPad Software, San Diego, CA) was used to analyze all data on the zebrafish. The Ballgown software was used to calculate the FPKM (Fragments Per Kilobase of gene/transcript model per Million mapped fragments) at the genetic and transcriptomic level. An independent-sample t test was used to compare the difference between the WCWE group and the negative control group. A p value less than 0.05 was considered to be statistically significant.

There were 1119 genes up-regulated and 1332 genes down-regulated by WCWE (Figure 4). The FPKM and the fold change of the ten significantly changed genes involved in proteasome signaling pathways are shown in Table 1.

The results of qRT-PCR showed that the relative genetic expression levels of all ten genes involved in proteasome signaling were significantly down-regulated (Figure 5, Table S1, Figure S1-30), which was consistent with the results of the mRNA-seq assay. 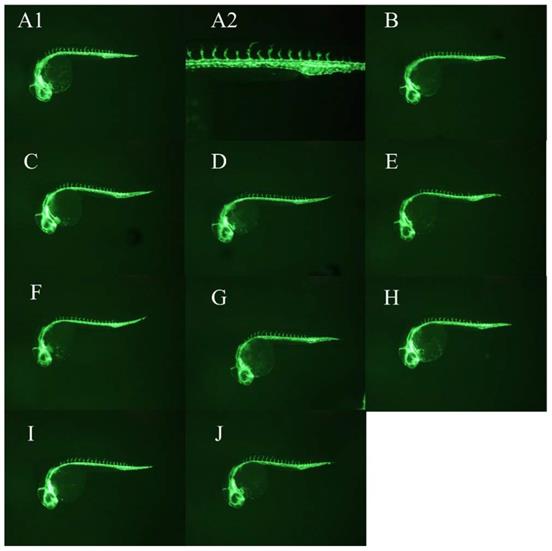 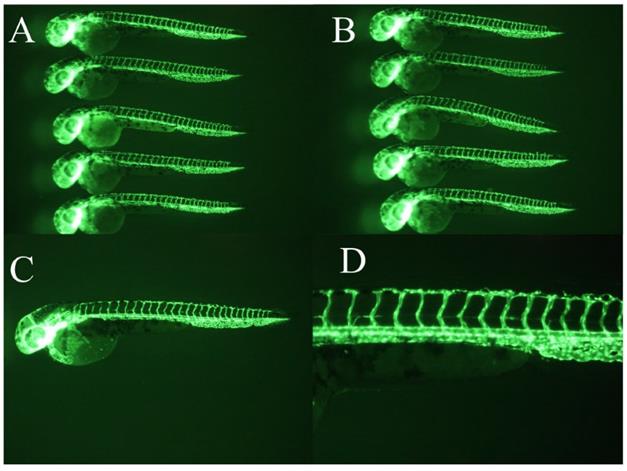 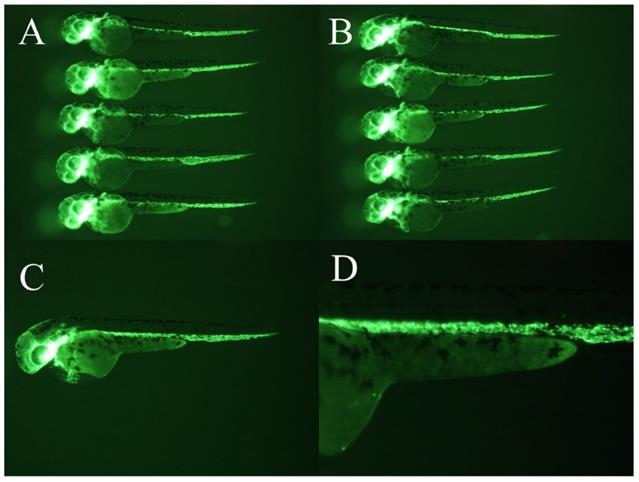 After a half century of research, it is now widely accepted that angiogenesis is essential for the dissemination and establishment of tumor metastases [6]. In the early 1990s, Weidner et al., [7] positively demonstrated that the amount of neovascularization measured directly in histologic sections of breast carcinoma correlates with the presence of metastasis. The expression levels of classic angiogenic effectors such as VEGF have been reviewed in our previous research [5]. It is the first time that the zebrafish model offers researchers the opportunity to gain knowledge on how wild chrysanthemum inhibits angiogenesis by regulating proteasome signaling in vivo, which provides new translational insights into the therapeutic potential of wild chrysanthemum to help cancer patients.

Volcano Plot. Volcano plot of the genes regulated by WCWE. 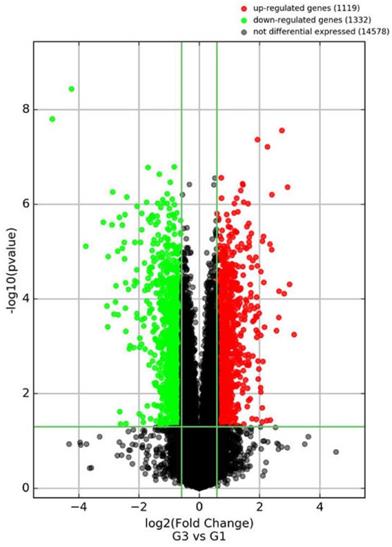 Results of qRT-PCR assay. The relative genetic expression levels of the ten genes involving proteasome signaling pathway. There was significant differences between the vehicle control group and the WCWE group in all ten genes (* indicates P < 0.05). 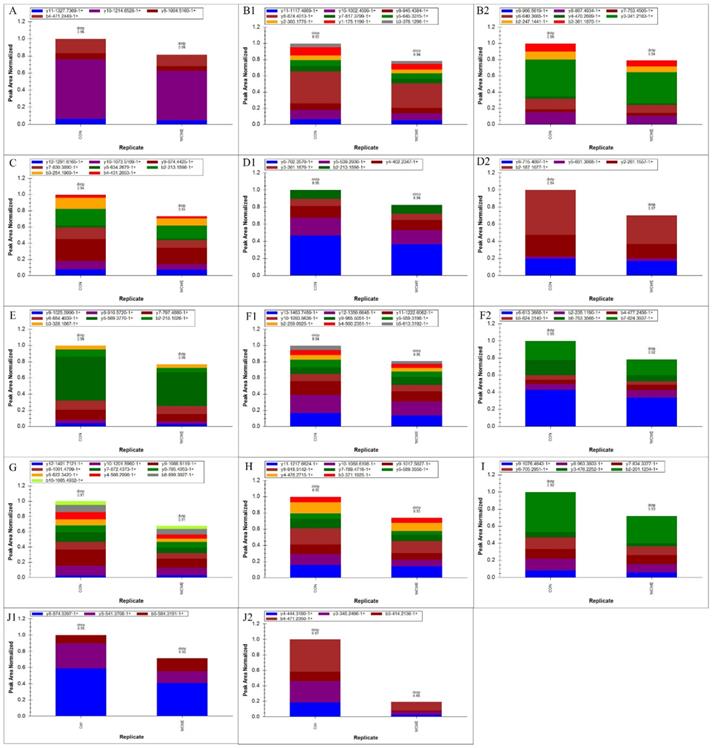 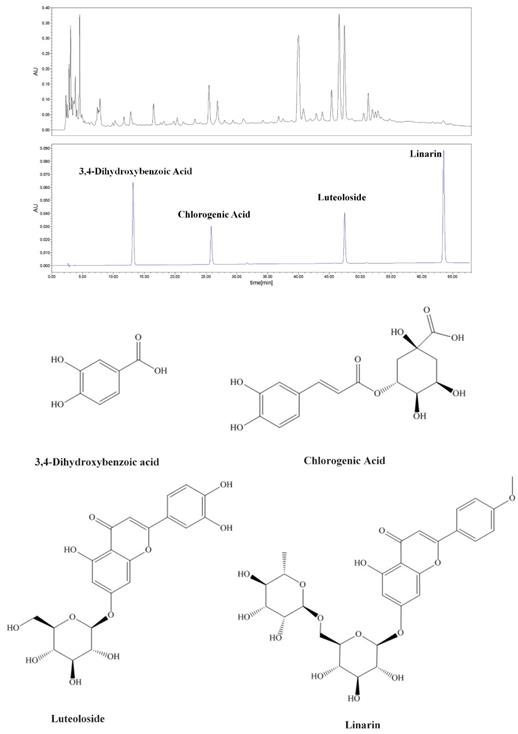 Proteasome, also known as 26S proteasome complex, consists of a lid, a base, and the core. It engages in an ATP-dependent proteolytic degradation of a variety of oncoproteins, transcription factors, cell cycle specific cyclins, cyclin-dependent kinase inhibitors, ornithine decarboxylase, and other key regulatory cellular proteins. Therefore, it regulates either directly or indirectly many important cellular processes [8]. The involvement of proteasome in the degradation of cancer-related proteins has been extensively studied [9]. Many researchers believe in that targeting proteasome is a feasible and valuable approach in the treatment of cancer. The success of the first-in-class proteasome inhibitor, such as bortezomib and carfilzomib - is inspiring scientists to explore other targets in the proteasome signaling pathway [10,11]. We have known that the expression levels and activity of many proteins are controlled through regulated ubiquitination and subsequent destruction by the 26S proteasome. As a major protein quality and quantity control system, the ubiquitin proteasome system (UPS) has a significant impact on angiogenic regulator proteins.

It is notable that proteins of the proteasome regulatory particle were significantly down-regulated by WCWE, such as PSDM7. PSMD7 is reported to be overexpressed in most carcinoma cells and its down-regulation contributed to decelerated tumor growth, inhibition of proteasomal function, induced cell apoptosis and attenuated activity of the mTOR/p70S6K pathway [12]. The reduced expression level of the proteasome regulatory particle means that proteasome activities were inhibited. Proteasome inhibitors have been used in the clinic to treat different types of cancer [13,14]. Many proteasome inhibitors, such as bortezomib [15] and lactacystin [16], have been proven to be associated with anti-angiogenesis. It is also notable that β-catenin were significantly down-regulated by WCWE at the protein level. β-catenin is a pivotal component of the Wnt signaling pathway; and it is regulated at three hierarchical levels: protein stability, sub-cellular localization, and transcriptional activity [17]. In the tissues of patients with non-small cells lung cancer, the increase in β-catenin content is associated with an increase in the number of proteasomes [17]. It has been reported that the detergent-insoluble nuclear component of β-catenin displays glycogen synthase kinase 3β (GSK-3β) and APC-independent proteasome sensitivity [18]. Although regulation of β-catenin proteasome sensitivity and the contribution of this process to β-catenin function may be very complex, our research results showed that WCWE may significantly inhibit β-catenin activity by the role similar to proteasome inhibitors.

We cannot technically say the present article is novel as we have first reported the phenotype that WCWE has an anti-angiogenic effect in our previous article [5]. But the present article greatly improves our understanding of the anti-cancer potential of wild chrysanthemum. Wild chrysanthemum has been considered to be a safe TCM in respected TCM books, and we did not notice any toxic effect in zebrafish given WCWE. Consequently, we think the anti-angiogenic effect was not a result from a toxic effect of Wild chrysanthemum. Wild chrysanthemum contains essential oils 0.60-1.29% (camphor, α-pinene, carvone, eucalyptol, borneol), and flavonoids (acaciin, linarin), chrysanthemin 0.42-0.45%, luteolin, and acacetin [19]. We tried to identify more of the ingredient compounds of wild chrysanthemum as we could; and therefore, we used reference samples different from our previous study [5]. This results in inconsistent HPLC assay findings. The ingredient compounds identified from WCWE have not been fully investigated and we are now continuing to carry out more experiments to determine which ingredient compound contributes to the effects of WCWE.

This work was supported by the Sichuan Province 2015: Support Project in Science & Technology (2015SZ0038 & 2019JDRC0028); and the Sichuan Province Early Career Medical Research: An Innovative Project (Q15063). The funding bodies, Department of Science and Technology of Sichuan Province and Sichuan Medical Association play no role in the study. We thank technical supports from Jingjie PTM-Biolab (Hang Zhou 310018, China) Co., Ltd.

Xiang Tu and Sen Zhong are currently applying for patents concerning wild chrysanthemum for tumor angiogenesis. The other authors declare they have no competing interests.