Zinc finger protein 521 (ZNF521) plays an important role in the tumor development and process. However, its regulatory role in hepatocellular carcinoma (HCC) remains unclear. In this study, we demonstrated for the first time that ZNF521 mRNA and protein was down-regulated in HCC tissues and cell lines. Down-regulated ZNF521 expression was significantly associated with malignant prognostic features, including advanced TNM stage and large tumor size. For 5-year survival, ZNF521 served as a potential prognostic marker of HCC patients. Moreover, ZNF521 inhibited cell proliferation, colony formation and cell viability through Runx2 transcriptional inhibition and AKT phosphorylation pathway. Moreover, we demonstrated that ZNF521 expression was regulated by miR-802. In HCC tissues. MiR-802 has an inverse correlation with ZNF521 expression. In conclusion, we demonstrate for the first time that ZNF521 is down-regulated in HCC tissues and inhibits HCC growth through Runx2 transcriptional inhibition and AKT inactivation, which was regulated by miR-802, suggesting the potential therapeutic value for HCC.

Hepatocellular carcinoma (HCC) has been regarded as one of the leading causes of cancer-related death worldwide, especially in China [1]. Although there have been considerable improvements in current therapy interventions for HCC, the clinical therapeutic outcomes are still undesirable because of its unlimited proliferation and tumor metastasis [2]. Most of HCC patients are diagnosed at advanced stages due to lack of specific biomarkers and therapeutic targets, which leads to high mortality and poor prognosis [3]. Therefore, investigating the molecular mechanisms involved in HCC pathogenesis is important for the treatment.

Zinc finger protein 521 (EHZF/ZNF521) is a multi-functional transcription co-factor containing 30 zinc fingers and an N-terminal motif that binds to the nucleosome remodeling and histone deacetylase (NuRD) complex. ZNF521 plays a critical role in the homeostasis of the hematopoietic progenitor cell compartment, neuronal differentiation, bone formation and cancer progression [4-6]. ZNF521 can arrest the apoptosis and enhance the proliferation, migration, and invasion of gastric cancer cells via regulating miR-204-5p [7]. ZNF521 interacts with GLI1 and GLI2 to enhance the activity of the sonic hedgehog pathway in medulloblastoma [8]. Moreover, ZNF521 contributes to the clonogenic growth, migration and tumorigenicity of medulloblastoma cells [9]. ZNF521 promotes B-cell viability and cyclin D1 gene expression in a B cell culture system [10]. miR-9 promotes the neural differentiation of mouse bone marrow mesenchymal stem cells via targeting ZNF521 [11]. However, the potential role of ZNF521 in the pathogenesis of HCC has not been investigated.

In the present study, we found that ZNF521 was abnormally down-regulated both in HCC tissues and cells and that down-regulation was associated with malignant prognostic features and reduced survival of HCC patients. ZNF521 repressed the growth of HCC cells in vitro and in vivo. Furthermore, ZNF521 suppressed Rnux2 transcriptional activity and regulated Runx2-related PI3K/AKT signaling pathways. miR-802 regulated ZNF521 expression via binding to its 3'UTR in HCC cells. Therefore, our data confirm that ZNF521 could be as a potential strategy for the diagnosis and treatment of HCC.

Hepatocellular carcinomas (HCC) tissues and adjacent non-tumor tissues (>2 cm from the margin of tumor) were obtained from patients who received surgical resection at the First Affiliated Hospital of Xi'an Jiaotong University. All the specimens were snap-frozen in liquid nitrogen and kept at -80°C after surgical removal. This study was approved by the Ethics Committee of this hospital. The written informed consents had been obtained from all patients before study.

Immunohistochemical analysis status was performed as our previously publication [13, 14].

Four-to-six-week-old male BALB/c nude mice (Centre of Laboratory Animals, The Medical College of Xi'an Jiaotong University, Xi'an, China) were used to establish the nude mouse xenograft model. Hep3B (5×106) cells that were transfected with ZNF521 overexpression vectors or control vectors were mixed in 150 µL of Matrigel and were inoculated subcutaneously into the flank of nude mice. The tumor volume for each mouse was determined by measuring two of its dimensions and then calculated as tumor volume = length × width × width/2. After 3 weeks, the mice were sacrificed by cervical dislocation under anesthesia with ether and the xenograft tumor tissue was explanted for examination. Animal protocols were approved by the Institutional Animal Care and Use Committee of Xi'an Jiaotong University.

In this study, statistical analyses were performed with SPSS 17.0 software (Abbott Laboratories, Chicago, IL). Data represent mean ± standard deviation (SD) of more than two independent experiments. A two-sided Student's t-test and one-way ANOVA were separately used to compare the statistical differences. The Kaplan-Meier method was used to estimate the overall survival (OS) of HCC patients with high or low level of ZNF521. Difference was considered statistically significant when P < 0.05.

ZNF521 is down-regulated in HCC tissues and cells

To clarify the role of ZNF521 in clinical, we divided the HCC patients as different subgroups according to the median value as a cutoff. The down-regulated ZNF521 was significantly associated with large tumor size (P = 0.026) and advanced TNM stage (P = 0.018, Table 1). Kaplan-Meier survival analysis cure showed that low ZNF521 HCC patients had a shorter overall survival (OS) and disease-free survival (DFS) in HCC patients (P = 0.0003, 0.0004, respectively, Figure 1E). Moreover, in other cohort HCC patients, 182 patients with ZNF521 high expression and 182 patients with ZNF521 low expression were analyzed in GEPIA (P < 0.05, Figure 1F). These data suggest that ZNF521 is a potential prognostic biomarker in HCC patients. 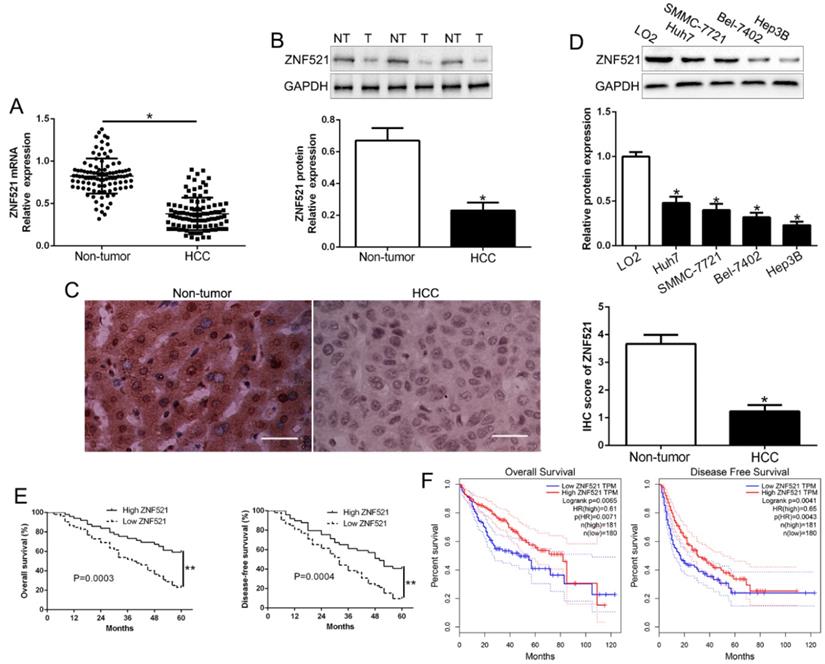 To further explore the function of ZNF521 on tumor growth in vivo, we used the subcutaneous tumor model and the data showed that ZNF521 overexpression significantly inhibited the tumor growth than control cells in mice (P < 0.05, Figure 3A). Moreover, we used the Ki67 and TUNEL staining to evaluate the proliferative and apoptotic rate in vivo. ZNF521 overexpression decreased Ki67 positive staining rate and increased the number of apoptotic cells for TUNEL positive staining (P < 0.05, Figure 3B-C). These results indicated that ZNF521 suppressed tumor growth in vivo. 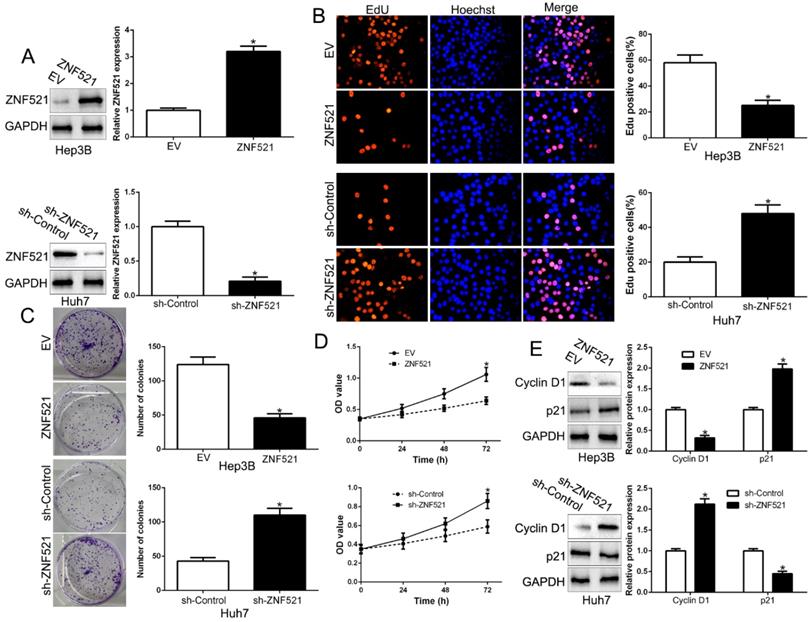 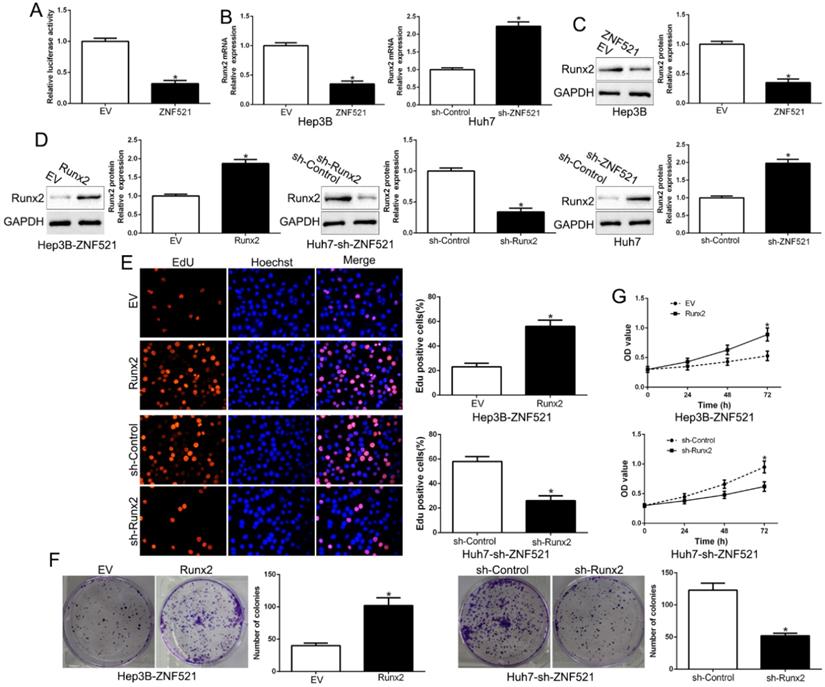 ZNF521 expression is regulated by miR-802

ZNF521 is identified as a direct target of miR-802 in HCC. (A) miR-802 and its putative binding sequence in the 3'-UTR of ZNF521. (B) miR-802 significantly suppresses the luciferase activity that carried wild-type (wt) but not mutant (mt) 3'-UTR of ZNF521. Anti-miR-802 led to a notable increase in the luciferase activity of wt 3'-UTR of ZNF521. (C) qRT-PCR analysis of ZNF521 mRNA expression in Huh7 cells with miR-802 or miR-control vector transfection and Hep3B cells with anti-miR-802 or anti-miR-NC vector transfection. (D) Overexpression of miR-802 reduced the expression of ZNF521 protein in Huh7 cells and knockdown of miR-802 increases the level of ZNF521 protein in Hep3B cells. (E) The expression level of miR-802 in HCC tissues and adjacent non-tumor tissues. (F) A significant inverse correlation between the mRNA levels of ZNF521 and miR-802 was observed in HCC tissues. U6 as the internal control; *P < 0.05.

Zinc finger structures, forming a total of 6 zinc finger clusters, participate in multiple signaling pathways and regulate the downstream target genes, thus regulating various biological processes such as hematopoietic differentiation, cell proliferation and autophagy [21]. ZNF521 was characterized as potent inhibitor of EBF1 and contributed to the development of B-cell leukemias. ZNF521 was a target gene and key effector of parathyroid hormone-related peptide signaling in growth plate chondrocytes [22]. In this research, we demonstrated that ZNF521 was down-regulated in HCC tissues and cells for the first time. In clinical data, we showed that down-regulated ZNF521 was significantly associated with large tumor size and advanced TNM stage. Moreover, ZNF521 down-regulation showed a worse prognosis for 5-year OS and DFS in HCC patients, which was consistent in other cohort HCC patients. These findings confirmed the fundamental role of ZNF521 in HCC development.

To investigate the biological effects of ZNF521 in HCC, we used the gain- and loss-of function experiment to clarify that ZNF521 significantly inhibited cell proliferation, colony formation and cell viability in HCC cells in vitro and in vivo. Mechanically, we confirmed that ZNF521 exerted its effects by regulating Runx2 expression and repressed its transcriptional activity. Runx2 was involved in osteoblastic differentiation, skeletal morphogenesis and cancer progression [23-25]. Runx2 overexpression promoted CXCR7 expression and cellular trafficking, AKT hyperactivation and prostate tumorigenesis [26]. Runx2 plays an oncogenic role in esophageal carcinoma by activating the PI3K/AKT and ERK signaling pathways [27]. Runx2 promoted HCC cell migration and invasion by regulating MMP9 expression [17]. Here, we identified that Runx2 mediated the function of ZNF521 on HCC cells. Moreover, PI3K/AKT signaling was proposed as a vital mechanism that regulates the initial steps of metastatic progression of cancer [12, 28]. Our results showed that AKT pathway abolished the inhibitory effect of ZNF521 on HCC cells. Taken together, these data demonstrated the suppressive effect of ZNF521 was mediated by inhibiting AKT phosphorylation pathway in HCC.

Previous studies showed that miRNA can specifically induce the degradation of target gene mRNA and inhibit the translation of gene [29, 30]. Here, we confirmed that miR-802 could bind with ZNF521 3'UTR. miR-802 negatively regulated the expression of ZNF521 mRNA and protein in HCC cells. Previous studies reported that miR-802 accelerates hepatocellular carcinoma growth by targeting Runx3 [20]. High blood miR-802 is associated with poor prognosis in HCC patients by regulating DNA damage response 1 (REDD1)-mediated function of T cells [31]. miR-802 inhibits cell proliferation and induces apoptosis in human laryngeal cancer by targeting Camp-regulated phosphoprotein 19 [32]. These data further confirm that miR-802 exerted its effects was cell-specific [33, 34]. Here, we demonstrated that miR-802 promoted HCC growth. In conclusion, these data suggest that ZNF521 was a downstream target of miR-802 in HCC.

In summary, we reported for the first time that ZNF521 was down-regulated in HCC tissues and cells and its down-regulation was associated with malignant clinical features and unfavorable prognosis. We confirmed that ZNF521 inhibited cell proliferation, colony formation and cell viability through Runx2 transcriptional inhibition and AKT phosphorylation pathway. Moreover, miR-802 regulated ZNF521 expression in HCC cells. These data indicated that ZNF521 was an important biomarker of HCC progression and a novel and attractive therapeutic target for HCC treatment.