Switching aerobic respiration to anaerobic glycolysis of cancer cells plays an important role in development and progression of acquired resistance. Since vitamin C enabled the inhibition of glycolysis of cancer cells, and erlotinib-resistant sub-line of HCC827 (ER6 cells) switched its metabolic features to higher glycolysis for survival, we hypothesize that vitamin C is able to inhibit glycolysis of ER6 cells. In this study, we found that both reduced vitamin C and oxidized vitamin C (DHA) could selectively suppress the viability of ER6 cells. DHA was efficient in inhibiting glycolysis and leading to energy crisis, which could be one mechanism for overcoming drug resistance to erlotinib of ER6 cells. Our data suggest that applying DHA could be a novel treatment strategy for NSCLC with acquired resistance to targeted therapy.

Targeting metabolite changes and its corresponding metabolic pathways has been novel ways to overcome drug resistance [19]. Data had proven that inhibition of GLUT1 activity and expression can sensitize head and neck cancer cells (Cal27 cells) to cisplatin treatment in both normoxic and hypoxic conditions [20]. Another data had shown that development of tamoxifen resistance may be driven by HIF-1α hyper-activation via modulation of Akt/mTOR and/or AMPK signaling pathways, and that inhibition of aerobic glycolysis and repression of this signaling pathway enable the restoration of tamoxifen sensitivity in antiestrogen-resistant breast cancer cells [21]. Similar outcomes that inhibiting glycolysis with 2-deoxyglucose and 3-bromopyruvate propylester is able to reverse the drug resistance were also reported in oxaliplatin-resistant colon cancer cells, sorafenib-resistant HCC cells and leukemia cells [22-24].

We have successfully established a series of erlotinib-resistant subclonal cells (ER1-6) originated from HCC827 cells through de-sensitizing the HCC827 cells in gradually increasing erlotinib concentrations until 10 μM in the culture media and reported AXL kinase as a novel resistance molecule in ER1-5 cells [8, 18]. We also found that ER6 cells switch their metabolic features to higher glycolysis for survival and combining inhibitions of glycolysis and AKT/autophagy could overcome drug resistance in ER6 cells [18]. In this study, we explored the effects of reduced vitamin C and DHA on ER6 cells comparing to HCC827 cells, investigated the underlying mechanism of vitamin C to ER6 cells and HCC827 cells, and evaluated the potential application of reduced or oxidized vitamin C for a potential adjuvant treatment of NSCLC with EGFR mutations.

All cell lines were maintained in RPMI-1640 medium supplemented with 10% fetal bovine serum and 1% Penicillin & Streptomycin in incubator under 37℃, 5% carbon dioxide condition.

Protein was isolated from cells using RIPA with 10 μM PMSF. Lysates were standardized for protein content. The following procedure followed by the guideline of manufacturer. The immune-reactive proteins were visualized using ECL (Thermo Fisher Scientific).

Cells were transferred into XF24 assay well then pretreated with or without DHA in normal medium. Finally, replacing and washing the normal medium with Seahorse assay medium without glucose. OCR and ECAR analysis followed the instructions of Seahorse Analyzer as reported previously (Ye, M., et al. 2017).

Cells were cultured in 6-well plate. When 80% confluence was reached, cells were treated with DHA. Then cells were washed for three times with PBS and collected cells after trypsinization. The following procedure followed by the guideline of manufacturer.

Mean values and SD were calculated by GraphPad Prism 5 software. The analysis of variance (ANOVA) was used to identify statistical differences between experimental factors using SPSS17.0. P<0.05 was considered as statistically significant.

We had reported that ER6 cells are more addicted to glucose previously [18]. When treated with reduced vitamin C after glucose deprivation for 24 and 48 hours, the viability of ER6 cells was suppressed in 1 mM dosage treatment, while this same dosage treatment was not able to affect the viability of HCC827 cells (Figure 1D, 1E). This indicates that reduced vitamin C enables to suppress ER6 cells selectively in both normal and glucose free medium. 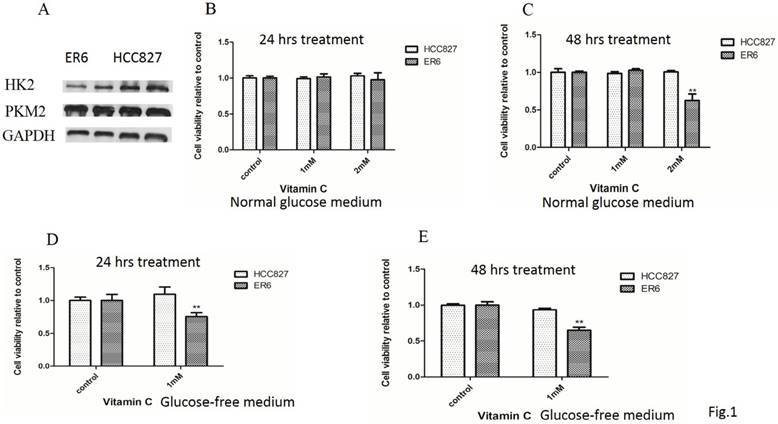 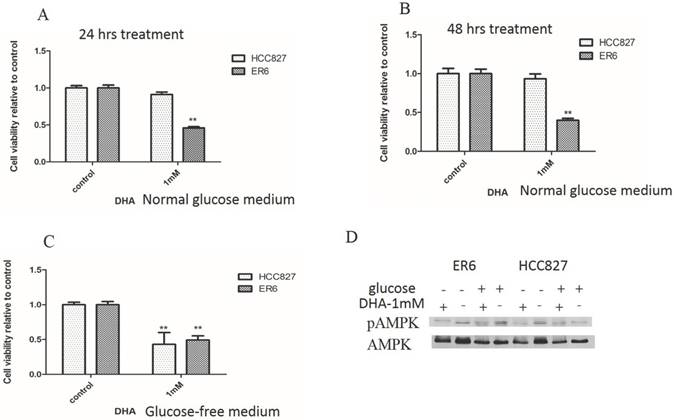 When cells were treated with 1 mM DHA in glucose free medium for 24 hours, the viabilities of both ER6 cells and HCC827 cells were suppressed (Figure 2C). Previously, we had reported that glucose deprivation is able to increase the phosphorylation of AMPK [18]. We wondered whether DHA treatment could affect the activation of AMPK. We found that DHA treatment was able to depress the activation of AMPK, especially after glucose deprivation in ER6 cells, while the depression of AMPK phosphorylation was only significant in glucose deprivation groups in HCC827 cells (Figure 2D). These data revealed that at the dosage of 1 mM DHA decreased the viability of ER6 cells selectively in normal glucose condition, while decreased the viability of both ER6 and HCC827 cells in glucose free medium. This phenomenon is closely related to the decrease of AMPK phosphorylation under both conditions, which might imply inhibition of further self-protection mechanisms by DHA, such as energy balance or autophagy etc. Clinically, it is difficult to deprive cells of glucose, so the selective depression of cell viability of ER6 cells by DHA with the presence of glucose is more valuable, which is a key focus of our following mechanism study. 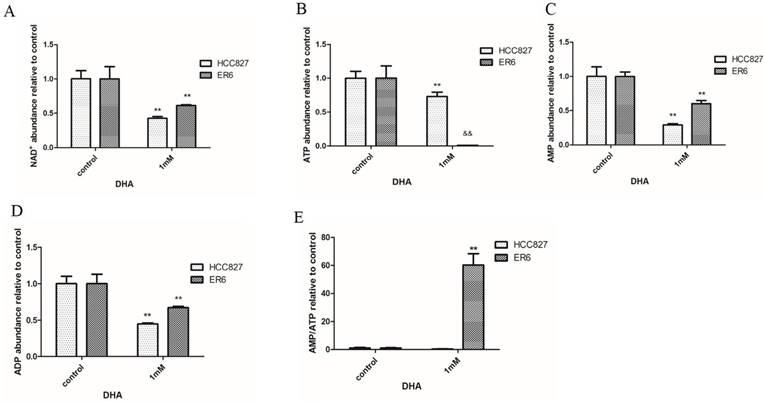 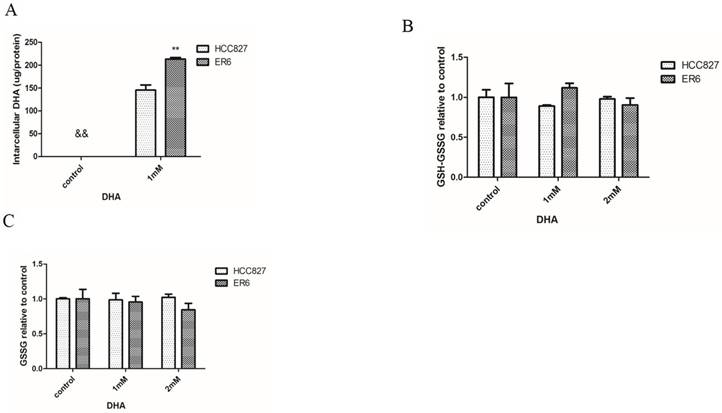 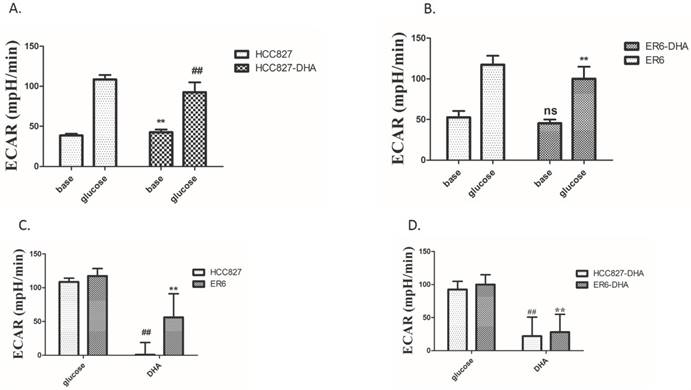 The fact that cancer cells increase glycolysis rather than oxidative phosphorylation to meet energy requirements under physiological oxygen conditions had been reported to have strong correlation with drug resistance [11]. Recently, we reported that ER6 cells have higher glycolysis potential and overexpress GLUT1 and MCT4, which are more sensitive to glucose deprivation. Deficiency of energy under glucose deprivation is one cause of decreased viability of ER6 cells [18]. However, clinical deprivation of glucose only to cancer cells is not practical, other intervention methods have to be considered. One study indicated that reduced vitamin C selectively kills KRAS and BRAF mutant colorectal cancer cells by targeting GAPDH, which is due to increased uptake of the oxidized vitamin C via GLUT1 [26]. A recent article showed that pharmacologically-dosed vitamin C enables to selectively kill multiple myeloma tumor cells [27]. High level vitamin C was reported to be able to be autoxidized, which provides an electron to oxygen to generate H2O2, thus excessive intracellular H2O2 leads to death of breast cancer cells [29]. To have better understanding of the effects of vitamin C on ER6 cells and HCC827 cells, we applied reduced vitamin C on ER6 cells and HCC827 cells and found that treating cells with 2 mM reduced vitamin C for 48 hours was able to decrease the viability of ER6 cells in the presence of 2 g/L glucose. Since ER6 cells are more sensitive to glucose deprivation, as mentioned above, lower concentration (1 mM) and shorter incubation time (24 hrs) of reduced vitamin C could selectively decrease viability of ER6 cells under glucose starvation condition. It is consistent to the report that high-dose vitamin C treatment selectively induces death of glycolysis-addicted KRAS and BRAF driven cancer cells [26]. Other article showed that doxycycline combined with vitamin C is a way to eradicate doxycycline-resistant cancer stem cells (CSCs) population [35].

Vitamin C uptake is mediated by two families of transport proteins, including sodium-dependent vitamin C transporters (SVCTs) 1 and 2, and the glucose transporters (GLUTs). GLUTs, mainly GLUT1 and GLUT3, transport the DHA, into cells and SVCTs transport reduced vitamin C directly into the cell [26, 31]. Considering that ER6 cells overexpress GLUT1, we wondered whether DHA treatment would be more efficient to suppress ER6 cells than HCC827 cells. We found that treatment with 1 mM DHA for 24 and 48 hours selectively decreased the viability of ER6 cells in normal glucose level, and 1 mM DHA combined with glucose deprivation treatment for 24 hours enabled to suppress both ER6 cells and HCC827 cells. Consistent to the reports that overexpression of GLUT1 enables to transport DHA more efficiently into cells [26, 36], we did find that ER6 cells have higher intracellular DHA concentration after DHA treatment than HCC827 cells. It indicates that overexpression of GLUT1 in ER6 cells facilitates ER6 cells to transport more DHA than HCC827 cells, which is the underlying mechanism of the selective suppression of reduced vitamin C and DHA on ER6 cells.

Studies had shown that vitamin C treatment kills cancer cells is ascribed to the cause of energy crisis due to glycolysis inhibition [26, 28, 30, 37]. We have recently proven that glucose deprivation enables to cause energy crisis and selectively depress the viability of ER6 cells [18]. Hence we hypothesized that DHA treatment is able to reduce energy production. We found that treatment with 1 mM DHA for 2 hours enabled to decrease intracellular abundance of NAD+ in both ER6 cells and HCC827 cells. And we also found the dramatically decreased ATP abundance in ER6 cells in 1 mM DHA treatment, while relatively higher abundance of AMP and ADP levels compared to HCC827 cells under the same treatment. It is consistent to the results of these metabolite levels under glucose deprivation treatment as we reported before [18]. We also found that DHA treatment suppressed AMPK both in normal glucose and glucose deprivation, which is in accordance with the previous finding [18, 26]. We have found that glucose deprivation stimulates AMPK and increases autophagy [18]. AMPK protects tumor cells from metabolic crisis through different mechanisms: autophagy induction, maintaining proper ATP levels [38, 39]. Hence, it suggests that DHA might depress the viability of ER6 cells through disturbing intracellular energy equilibrium and inhibiting AMPK phosphorylation. Studies had shown that metformin targets cancer stem cells in breast cancer, pancreatic cancer, glioblastoma and colon cancer by inhibiting oxidative phosphorylation and by reducing mitochondrial ATP production resulting in energy crisis [40]. Another research showed that neoalbaconol, a novel small-molecular compound isolated from the fungus, induces energy depletion by reducing the consumption of glucose and ATP generation [41]. It indicates that disturbance of energy balance by suppressing ATP production of ER6 cells is the underlying mechanism of viability depression of ER6 cells by DHA.

To better understand the underlying suppression mechanism of DHA to ER6 cells, we applied XF24 extracellular flux analyzer (Seahorse Biosciences Agilent technologies) to measure real time glycolysis ability, and found that DHA pretreatment, DHA supplement and combined DHA pretreatment with DHA supplement were able to suppress glycolysis in ER6 cells and HCC827 cells. What we found is consistent with previous reports [26, 28, 30, 37]. Studies had shown that increased DHA uptake causes oxidative stress as intracellular DHA is reduced to vitamin C, which depletes glutathione [26-29]. Unfortunately, we did not find DHA treatment impacted redox state of ER6 cells and HCC827 cells. We had previously reported that the antioxidation ability of ER6 cells is destroyed and produces more ROS than HCC827 cells without any treatments ascribed to mitochondria dysfunction [18]. A paper showed that treatment of cells with vitamin C and quercetin did not modulate cellular reduced glutamine levels in breast cancer cells [42]. It suggests that DHA treatment disrupts energy production of ER6 cells by inhibiting glycolysis directly rather than promoting oxidative stress in the way of consuming reduced glutathione.

In conclusion, DHA is more efficient than reduced vitamin C in depressing the viability of ER6 cells in the presence of glucose. Inhibiting glycolysis which results in energy crisis might be a mechanism of the suppression of the viability of ER6 cells by DHA. DHA supplement could be a potential strategy against acquired resistance to TKIs in NSCLCs' targeted therapies.