Background: The mortality of patients with non-small cell lung cancer (NSCLC) is rather high. This is largely because of the lack of specific targets and understanding of the molecular mechanism for early diagnosis. Dishevelled (Dvl) dysregulation leads to malignant progression. We confirmed that Dvl1 expression is associated with a poor prognosis of patients with NSCLC. However, how Dvl1 transmits signals through the Wnt/β-catenin pathway remains unknown.

Methods: In this study, the expression levels of Dvl1 and β-catenin in resected NSCLC samples were immunohistochemically analysed. Dvl1 cDNA and small interfering RNA against β-catenin were transfected into NSCLC cells, and their effects on canonical Wnt signalling and biological behaviour of NSCLC cells were analysed. Using bioinformatics analyses, an interaction between microRNA (miR)-214 and β-catenin was identified; miR-214 expression was determined in NSCLC tissues using quantitative real-time polymerase chain reaction. An exogenous miR-214 (mimic) was used to analyse the biological behaviour of NSCLC cells and the effect of Dvl1 on canonical Wnt activation.

Conclusions: Our results suggest that Dvl1 is a potential therapeutic target for NSCLC and that miR-214 plays an inhibitory role in Dvl1-mediated activation of Wnt/β-catenin signalling in NSCLC cells, which could affect NSCLC progression.

Lung cancer is a serious health problem worldwide [1]. Non-small cell lung cancer (NSCLC) accounts for more than 85% of all lung malignancies [2]. Despite the availability of many therapeutic approaches, the mortality rate of NSCLC is rather high. This is largely due to the lack of specific targets and understanding of the detailed underlying molecular mechanisms. Therefore, the exploration of effective biomarkers for early diagnosis is important for improving the prognosis of NSCLC.

Dishevelled (Dvl), belonging to a family of phosphoproteins, relays signals that arise from all Wnt ligands to mediate tumour growth [8]. Three isoforms of Dvl—Dvl1, Dvl2, and Dvl3—are encoded by mammalian genes. Dvl1 has been studied extensively because it is a crucial component of the canonical Wnt/β-catenin pathway [9]. Dvl1 can activate Wnt/β-catenin signalling in NSCLC, which is overexpressed in patients with NSCLC, and is associated with poor prognosis [10]. However, the mechanism by which Dvl1 regulates Wnt/β-catenin signalling is poorly understood.

In this study, using TargetScan target prediction, we identified a potential interaction between miR-214 and the 3′-untranslated region (UTR) of β-catenin and elucidated the role of miR-214 in Dvl1-modulated Wnt/β-catenin signalling. The findings of this study might be valuable in the identification of new therapeutic targets for NSCLC.

Twenty-four fresh NSCLC samples from patients who had undergone surgery were selected from the First Hospital of China Medical University in 2017. We excluded chemotherapy- and radiotherapy-treated patients. Corresponding paracancerous tissues (at least 5 cm from the lesion) were collected for comparison. The samples were frozen in liquid nitrogen and stored at -80 °C for quantitative real-time polymerase chain reaction (qRT-PCR) analysis.

Tumour samples from 122 patients with NSCLC, who underwent surgical resection but did not undergo chemotherapy or radiotherapy prior to surgery, at the First Hospital of China Medical University between 2013 and 2015, were selected for immunohistochemical analysis.

This study was conducted under the guidelines of the Institutional Review Board of China Medical University (No. 2016 [LS] 014). Written informed consent was obtained from all patients.

Immunohistochemical procedures were the same as previously described [11]. Primary antibodies against Dvl1 (1:100; sc-8025, Santa Cruz Biotechnology, Dallas, TX, USA) and β-catenin (1:200; 8480, Cell Signaling Technology, Danvers, MA, USA) were used in the study. Score evaluation was based on the following criteria: (a) Dvl1 positivity was defined by ≥ 10% positively stained cancer cells; and (b) β-catenin expression was classified as either normal (≥ 80% cancer cells with positive membranous staining) or abnormal (≥ 10% cancer cells with positive nuclear or cytoplasmic staining).

The 3′-UTR of the β-catenin mRNA CTNNB1 (accession no. NM_001098209.1) was amplified using PCR and subcloned into the pGL3 vector MCS cloning site (Promega Corporation, Madison, WI, USA). CTNNB1 was classified as either wild type (WT) or mutant (Mut, binding sites for miR-214), and pGL3-WT-CTNNB1-3′-UTR and pGL3-Mut-CTNNB1-3′-UTR plasmids were generated. The sequence for the CTNNB1 3′-UTR forward primer was 5′-TCTAGAATACAATGACTT TTTAGCTG-3′ and that for the reverse primer was 5′-TCTAGATTAGCCAAG-3′.

The cells were fixed with 4% paraformaldehyde and incubated with primary antibodies against either Dvl1 (1:50; Santa Cruz) or β-catenin (1:100; Cell Signaling Technology) at 4 °C overnight and then incubated with goat anti-mouse IgG-FITC (OriGene, Rockville, MD, USA) at room temperature (24-26 °C) in the dark. We counterstained the nuclei with Hoechst 33258 (Thermo Fisher). The images were acquired using a confocal laser scanning microscope (Olympus, Japan).

The procedures and experimental equipment used for the Transwell assay have been described previously [12].

To predict the potential upstream miRNAs of CTNNB1, TargetScan (http://www.targetscan.org/vert_72/) was used. Pearson correlation analysis was performed between the potential candidate miRNAs and CTNNB1.

In the NSCLC group with Dvl1 positivity, nuclear (Figure 1C, I), cytoplasmic (Figure 1D, E), and membranous (Figure 1J, K) expression was observed. The correlation between Dvl1 overexpression and clinicopathological characteristics is shown in Table 1. Dvl1 expression was positively correlated with tumour differentiation (P < 0.05) but not significantly associated with sex, age, or lymphatic metastasis (P > 0.05). Dvl1 positivity was considerably higher in lung adenocarcinomas than in lung squamous cell carcinomas and significantly higher in stages II-III than in stage I (P < 0.05). Kaplan-Meier analysis suggested a notably lower survival period for patients with NSCLC with positive Dvl1 expression than for patients with negative Dvl1 expression (74.486 ± 5.000 vs 46.334 ± 4.085 months, P < 0.05; Figure 2A).

Dvl1 was expressed in different locations in NSCLC tissues, corresponding to different prognoses (Figure 2B). Compared to the group with negativity and membranous positivity, the group with cytoplasmic or nuclear positivity had relatively poor prognoses. β-catenin positivity was considerably correlated with poor prognosis in NSCLC (Figure S3A). It was expressed in different locations (Figure 1F-H, L), corresponding to different prognoses (Figure S3B). A significant positive correlation was found between Dvl1 and β-catenin overexpression in NSCLC tissues (P < 0.05, Table 1). 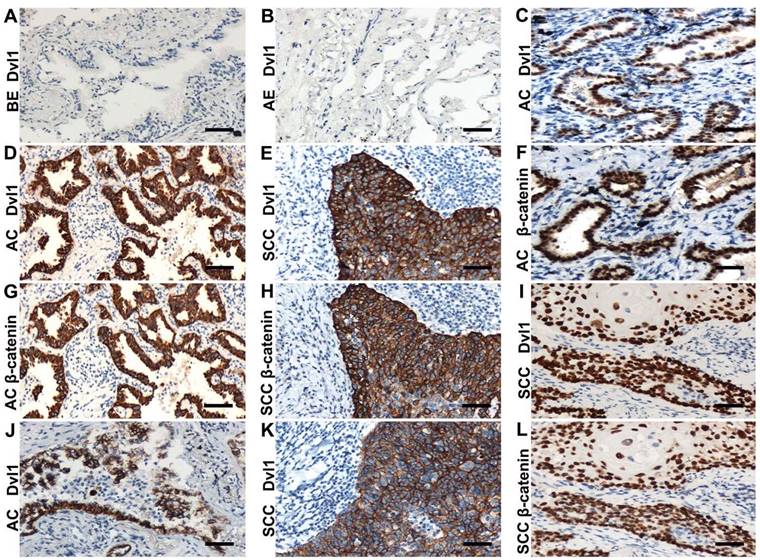 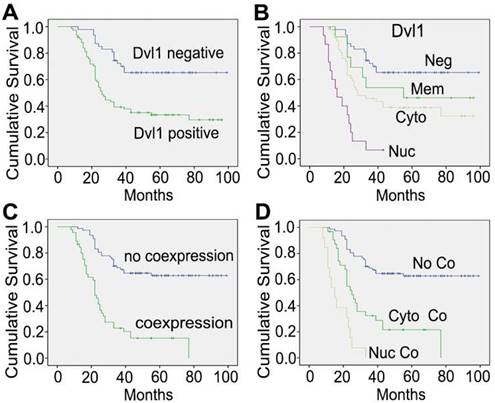 Relationship between Dvl1 and β-catenin in NSCLC 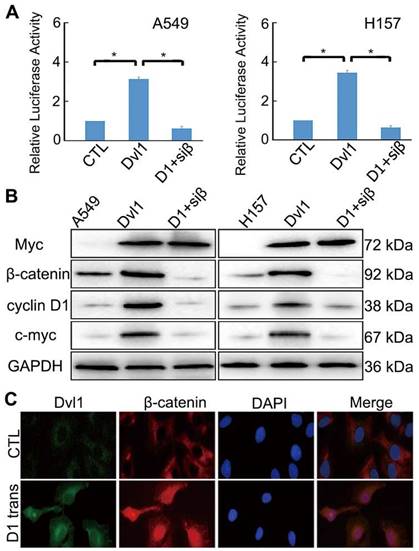 β-catenin is a target of miR-214 [15]. Bioinformatics analysis identified a potential miR-214-binding site in the 3′-UTR of the β-catenin gene CTNNB1 (Figure S4).

To confirm the role of miR-214 in Dvl1-induced activation of canonical Wnt signalling, we transfected Dvl1 expression plasmids and miR-214 into NSCLC cells. Dvl1 transfection significantly promoted the nuclear translocation of β-catenin, the luciferase activity of β-catenin, and the expression of c-Myc and Cyclin D1 (Figure 6A, B). Upon confirmation of successful co-transfection of miR-214 and Dvl1, the luciferase activity in the cells co-transfected with Dvl1 and miR-214 was found to be significantly downregulated compared with that in cells transfected with Dvl1 alone (Figure 6B). Furthermore, β-catenin nuclear translocation and Cyclin D1 and c-Myc expression were significantly decreased (P < 0.05; Figure 6C), as was the malignant phenotype of A549 cells (Figure 6D-G).

Understanding the molecular mechanisms of NSCLC malignant phenotypes is crucial for achieving a favourable prognosis for patients. Dysregulation of signalling pathways during malignant progression is partly attributable to the aberrant expression of miRNAs [16]. miRNAs are small noncoding RNAs that complementarily interact with the 3′-UTR of target mRNAs to degrade or translationally inhibit them [17,18]. Nearly 30% of all mRNAs are potential miRNA targets. Each miRNA targets multiple functionally related genes to mediate signalling networks [18,19]. Many miRNAs have been implicated in tumorigenesis, functioning as either oncogenes or tumour suppressors. miR-21 affects the biological status, such as invasion, of NSCLC cells through aberrant EGFR signalling [20]. Some miRNA alterations and targeting effects have been found in NSCLC. For example, the interaction of miR-4731-5p with ribosomal protein large P0 is crucial for the progression of NSCLC [21]. These studies suggest that miRNA participates in lung carcinogenesis. 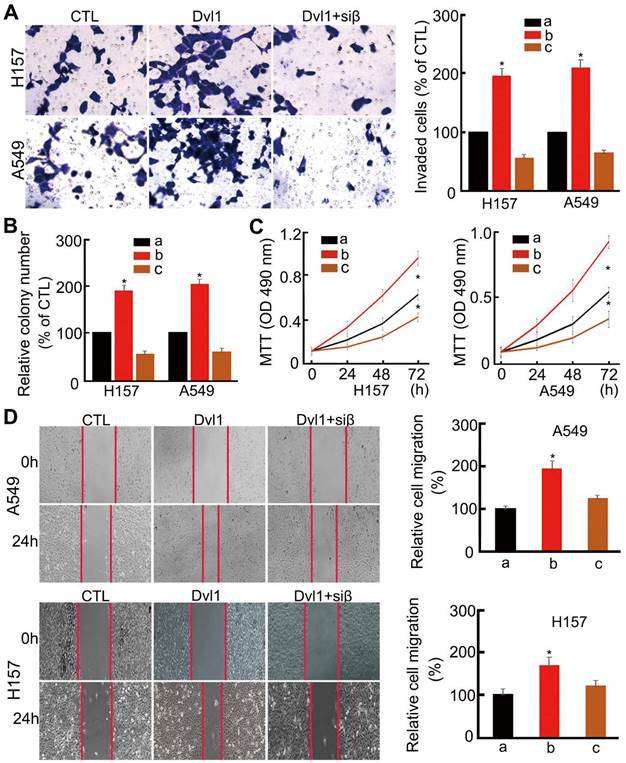 Influence of miR-214 on β-catenin expression in NSCLC cells. (A) β-catenin mRNA expression in NSCLC and paracancerous tissues. (B) The relationship between miR-214 and β-catenin in NSCLC tissues. (C) Dual-luciferase assay analyses of Wnt/β-catenin signalling under different treatments; A549 cells were transfected with β-catenin/WT-3′-UTR or β-catenin/MUT-3′-UTR and then treated with different miRNAs. m214, miR-214. NC, negative control. (D) The effect of miR-214 transfection on β-catenin mRNA expression. (E) The effect of miR-214 transfection on the target genes of Wnt/β-catenin signalling. KD, K Da; *, P < 0.05. 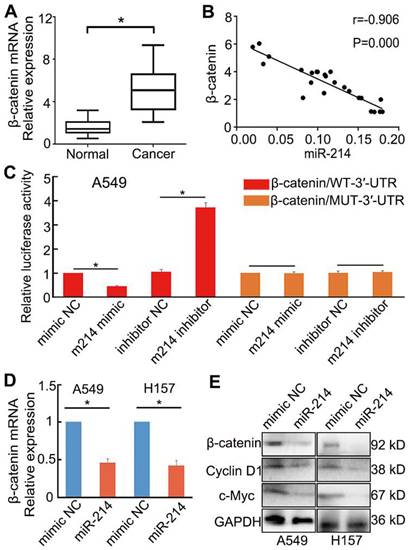 Interestingly, miR-214 works with β-catenin as a heterotypic transcriptional complex and negatively regulates canonical Wnt downstream gene transcription [22]. To identify the possible targets of miR-214 in NSCLC cells, the TargetScan software was used, and the prediction results confirmed that β-catenin is the most likely target of miR-214. Our results confirm that miR-214 directly targets the 3′-UTR of β-catenin to inhibit Wnt/β-catenin signalling in NSCLC cells, suggesting that miR-214 plays a key role in canonical Wnt-β-catenin signalling.

Wnt signalling plays an important role in embryonic development, whose deregulation leads to the initiation and progression of human malignancy via regulation of target gene expression. Canonical Wnt/β-catenin signalling is a potential therapeutic target in malignancies, such as NSCLC and triple-negative breast cancer [23]. Malignant tumour cells acquire invasive-associated phenotypes via regulation of the Wnt pathway. Dvl plays an important role in transmitting Wnt signals in development and carcinogenesis in humans. The present study confirmed that Dvl1 promotes NSCLC progression. However, the mechanism of Dvl1 integrating upstream signals and transmitting them to downstream components has so far been poorly understood. 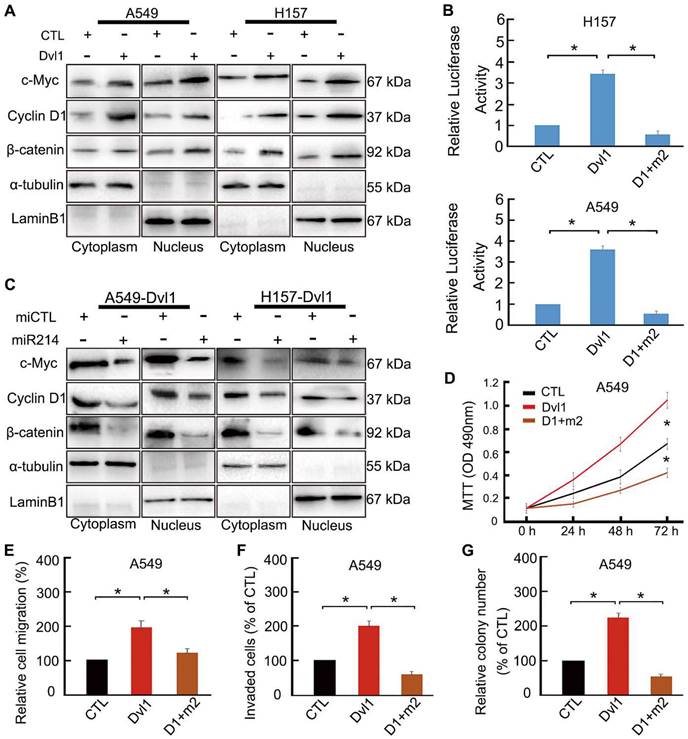 miR-214 is a negative factor for canonical Wnt signalling, whereas Dvl1 is a positive factor. This indicates potential antagonistic effects between them. We found that Dvl1 reverses miR-214-mediated inhibition of Wnt/β-catenin signalling in NSCLC cells. Our results indicate that the interaction of miR-214 with β-catenin inhibits the Dvl1-induced activation of canonical Wnt signalling. In recent years, many databases have been developed, such as TargetScan and PicTar, facilitating bioinformatics analyses. Bioinformatics-based prediction indicates that miR-214 targets β-catenin at the 3′-UTR and regulates its expression. Our luciferase reporter assay confirmed this prediction in NSCLC cells.

miRNAs detected in tissues, either down- or upregulated, are associated with various diseases. Takamizawa et al. discovered that the reduced expression of let-7 miRNA was associated with poor prognosis in NSCLC [26]. Likewise, miR-184 and miR-489-3p functionally converge on canonical Wnt signalling for NSCLC diagnosis and drug resistance prediction [27]. Whether these miRNAs are involved in the Dvl1-induced activation of canonical Wnt/β-catenin pathway and whether one or more of them work in synergy with miR-214 remains to be explored in the future.

In summary, we confirmed that miR-214 binds to the 3′-UTR of β-catenin. Dvl1 activates canonical Wnt signalling by inhibiting the interaction of miR-214 with β-catenin and promoting stable β-catenin nuclear translocation in NSCLC cells, which contributes to pulmonary tumorigenesis. We showed that miR-214 is not only sufficient but also required for Dvl1-induced activation of the Wnt/β-catenin pathway, and the interaction between miR-214 and β-catenin is critical for this process. Notably, the inhibition of miR-214 and β-catenin interaction is critical for promoting Dvl1-induced β-catenin nuclear translocation and canonical Wnt signalling activation. Therefore, our results suggest that Dvl1 is a potential therapeutic target for NSCLC and that miR-214 plays an inhibitory role in Dvl1-mediated activation of Wnt/β-catenin signalling in NSCLC cells, which may affect the progression of NSCLC.

GW, EW, and HZ designed the research; YL, JZ, YZ, and HZ performed the research; JW, LY, and JD collected the data; HZ, GW, and YL wrote the paper; and HZ, EW, and GW analysed the data. All authors approved the submitted version and agreed to be accountable for the content of the work.

This study was funded by National Natural Science Foundation of China (grant number 81602022) and Department of Science and Technology of Liaoning Province (grant number 2021-MS-197).

This study was conducted according to the guidelines of the Institutional Review Board of China Medical University (No. 2016 [LS] 014). Written informed consent was obtained from all patients.