GRK3 as a Prognosis Biomarker in Gastric Cancer

Background: Globally, gastric cancer is ranked 4th and 3rd in terms of incidence and mortality rate among all cancer types. This study aimed to examine the relationship between G protein-coupled receptor kinase 3 (GRK3) and gastric cancer prognosis and investigate the role of GRK3 in gastric cancer carcinogenesis.

Methods: GRK3 level in gastric tissues and cells were determined using immunohistochemistry and immunoblotting. Kaplan-Meier analysis with the log-rank test was employed to evaluate the relationship between GRK3 expression and gastric cancer prognosis. RNAi technology was applied to examine the effects of GRK3 inhibition on gastric cancer proliferation and spread.

Gastric cancer (GC) is ranked 3rd in terms of mortality rate among all cancer types [1]. Although the incidence of GC is decreasing, the prognosis of patients with GC remains poor. A 2019 government report indicated that approximately 3,600 people were diagnosed with GC and GC caused over 2,000 deaths in 2106 in Taiwan. Clinical treatment of patients with GC remains challenging owing to the lack of understanding of the pathogenesis of GC and the lack of targeted gene therapies [2, 3]. Nevertheless, advances in molecular biology techniques have provided possibilities for exploring GC-related factors, including oncogenes and tumor suppressor genes, which can be used as novel biomarkers for GC [4]. Some aberrantly expressed molecules such as USP3, TMPO-α, NCAPG, KLF16, and RAD18 could be used as prognostic biomarkers for GC [5-9].

In this study, we examined the expression of GRK3 in GC and assessed the correlation between GRK3 expression and clinicopathologic characteristics of GC and patient survival. We also examined the role of GRK3 in regulating cell proliferation, migration, and invasion.

For this study, the paired tumor and adjacent normal samples were collected from 144 GC patients at Taipei Medical University Wan Fang Hospital between 1998 and 2011. None of these patients had received preoperative chemotherapy and/or radiotherapy. This study was performed in accordance with the Helsinki declaration and was approved by the Research Ethics Committee of Taipei Medical University Wan Fang Hospital (Approval No. 99049). Informed consent was obtained from all the participants.

The immunoreactivity was detected using the conventional peroxidase-conjugated streptavidin-biotin method (Dako REAL EnVision Detection System; Dako, Carpinteria, CA, USA). The primary antibody against GRK3 (purchased from LifeSpan, Cat. No. LS-C164294, Seattle, WA, USA) were added to the paraffin-embedded sections overnight at 4°C. Figure S1 showed the whole blot of GRK Western blotting in gastric tissues. In this blot, GKR3 was the major band. It was thought that the immunostaining shown in Figure 1A was mostly contributed by the major GRK3 band. Human hepatocellular carcinoma was previously demonstrated to be positive for GRK3. Negative controls were included by substituting the primary antibody with 1× phosphate buffer saline (Corning). Photos were captured with BX51 microscope (Olympus, Tokyo, Japan). The staining intensity of GRK3 was defined as follows: 0, no staining; 1, weak and focal staining in < 25% of the tissue; 2, moderate staining in 25%-50% of the tissue; and 3, strong staining in > 50% of the tissue. Patients with a score of 0 or 1 of GRK3 expression were designated negative for GRK3, and patients with a score of 2 or 3 were designated positive for GRK3. All stained sections were scored by an experienced pathologist (Fang CL) whthout prior knowledge of the clinicopathologic parameters and clinical outcomes of the patients.

Isolation of total proteins from cells and tissues were performed using RIPA Buffer (Thermo). Protein samples were denatured and separated using 10% SDS-PAGE. After electrophoresis, the proteins were transferred to nitrocellulose membranes and the blocked membranes were added with GRK3 antibody overnight at 4 °C. β-Actin was used as a loading control. After incubation with peroxidase-conjugated secondary antibodies (Sigma), enhanced chemiluminescence reagents (Thermo) were employed to visualize the protein signals. GeneTools software (Syngene, Cambridge, UK) was used to process the images.

Cells were seeded into 6-well plates (500 cells/well) and cultured for 12 days. Individual colonies were fixed with 10% formalin and stained with 1% crystal violet. The plates were scanned with Scanjet 2200c scanner (HP, Palo Alto, CA, USA). After scanning, methanol was added at room temperature to solubilize the dye. The optical density (OD540) was read to quantify the number of colony formed. The assay was conducted three 3 times, and the results were presented as the mean ± SD.

The distribution of cell cycle phases was determined by analysis of propidium iodide-labeled cells, as described in our previous study [17].

Cells (5 × 105) were seeded into 12-well plates and grown to 100% confluence. A wounded area was created by scratching the confluent cell monolayer with a 200 μL pipette tip. The shed cells were washed with 1× phosphate buffer saline, and the cells were then cultured for 18 hours. The migration of cells to the wounded area was monitored at 0 and 18 hours, and the wounded area was photographed (100× magnification, with Leica DMIRB microscope, Leica, Wetzlar, Germany). The number of migrated cells was quantified using Image J software. The percentage of cell migration was calculated by defining the number of migrated wild type cells as 100%. All experiments were performed in triplicate, and the results were presented as the mean ± SD.

The cell invasive capability was examined using a Cell Invasion Assay Kit (Merck Millipore, Darmstadt, Germany), following the manufacturer's instructions. The cells (2 × 105) in serum-free media were seeded to ECMatrix-layered cell culture inserts (containing 8 μm pore size polycarbonate membranes) and complete media were added to 24-well plates. After 24 hours, the cells on the upper surface were removed, and the invaded cells on the lower surface of the membranes were stained with the Staining Solution. The photos were taken (100× magnification, with Leica DMIRB microscope), and the number of invaded cells was quantified. The percentage of cell invasion was calculated by defining the number of invaded wild type cells as 100%. The assay was conducted 3 times independently, and the results were presented as the mean ± SD.

The χ2 test was performed to analyze the correlation between GRK3 level and various clinicopathologic features. Kaplan-Meier method was used to create survival curves based on high and low GRK3 immunohistochemical scores and log-rank test was used to compare disease-free and overall survival. Parameters that emerged as significant (P < 0.05) in the univariate analysis were entered as variables in the multivariate Cox regression model, and the hazard ratio (HR) and independence of prognostic impact were determined in a stepwise backward fashion. All data were analyzed using SPSS version 24.0 (IBM, Armonk, NY, USA). The differences in cell growth, migration, and invasion between control and GRK3-manipulated cells were examined using Student's t tests. All statistical tests were 2-sided, and P < 0.05 was considered significant. 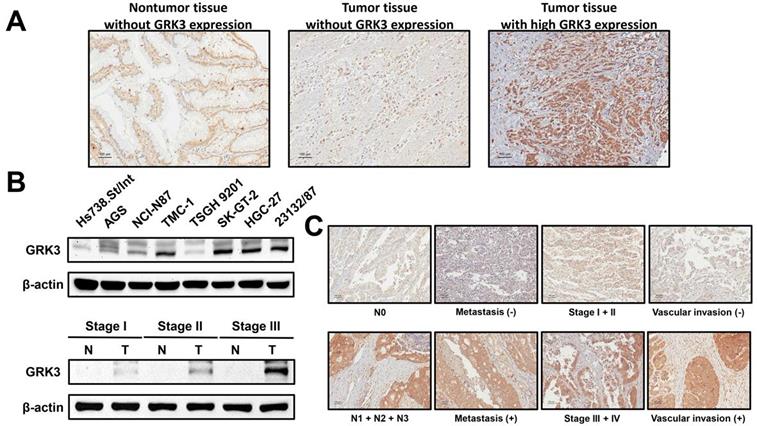 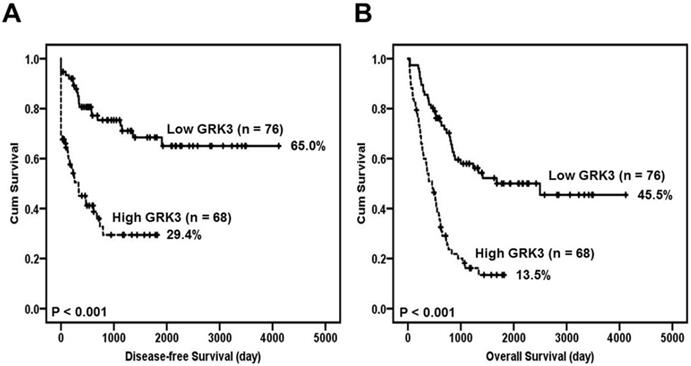 GRK3 expression in GC and its correlation with clinicopathologic characteristics 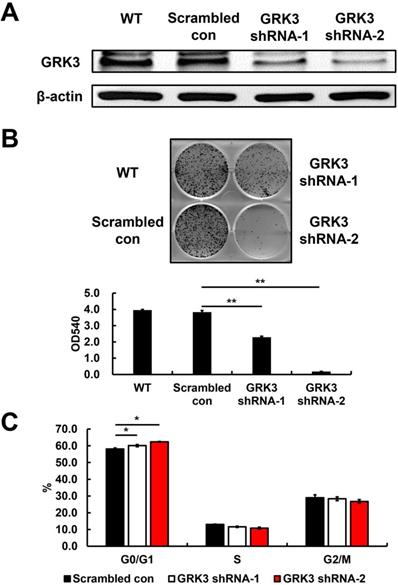 In the multivariate analysis, only GRK3 overexpression and distant metastasis were prognostically independent (Table 2).

In summary, GRK3 overexpression seemed to be an independent predictor of poor patient prognosis. Increased GRK3 expression may promote GC progression and can be used as a biomarker for GC.

To understand the biological events involved in the inhibition of proliferation resulting from GRK3 knockdown, flow cytometry was used to analyze the distribution of various cell cycle phases. The percentage of G0/G1 cells was significantly increased in GRK3-knockdown HGC-27 cells (Figure 3C). Therefore, the shRNA experiment revealed that GRK3 knockdown interfered with the transition from G0/G1 phase to S phase during cell cycle, thereby inhibiting HGC-27 cell proliferation.

As HGC-27 cells, the cell migration and invasion of GRK3-knockdown AGS cells were inhibited compared with the control group (Figure S2).

According to statistical data from the World Health Organization Report on Cancer, over 1 million new cases of GC are diagnosed annually around the world and the proportion of male patients with GC is twice that of female patients. Hence, GC is considered an important global health issue. The low survival rate of patients with GC is attributed to several factors, including the lack of understanding of GC pathogenesis and the lack of suitable prognostic biomarkers. Hence, identifying new molecular biomarkers will aid in GC diagnosis and treatment. Therefore, investigating the molecular mechanisms of GC is urgent and important.

GRKs phosphorylate G protein-coupled receptors to regulate their function, thereby affecting the downstream biological processes under the control of these receptors [13, 18-21]. Previous studies have reported that GRK3 may act as an oncogene or a tumor suppressor gene in different cancers, depending on different tissues types, cancer types, and cancer stages. At present, the expression level of GRK3 in GC remains unknown. In this study, we observed that GRK3 expression in both GC tissues and cells was higher than that in normal gastric tissues and cells; GRK3 expression also showed a significant positive correlation with various clinicopathologic characteristics, such as lymphatic metastasis, distant metastasis, TNM stage, and vascular invasion. These results indicate that GRK3 acts as an oncogene in GC. 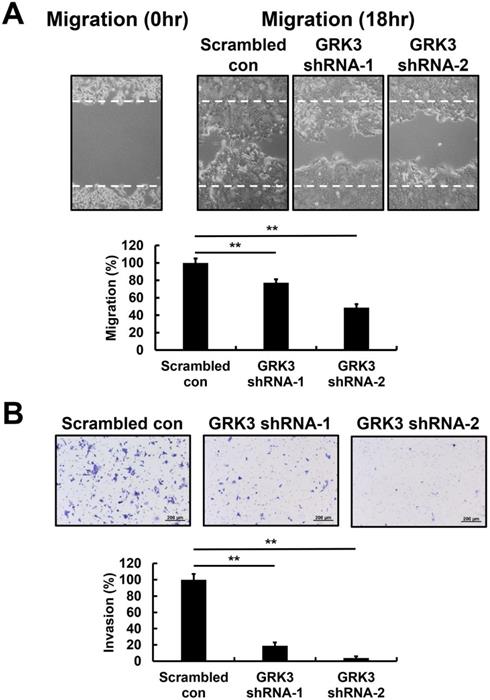 Although the correlation between GRK3 overexpression and prognosis has been reported in liver, colon, and pancreatic cancers, a consistent conclusion has not been obtained [14-16]. To further examine the prognostic potential of GRK3, we analyzed the correlation between GRK3 expression and patient survival. From Kaplan-Meier survival curves, we observed that GC patients with high GRK3 expression had a significantly shorter disease-free survival and overall survival time than the patients with low GRK3 expression. This finding was identical to the findings in colon and pancreatic cancers. Multivariate Cox regression analysis also showed that the overexpression of GRK3 was an independent prognostic biomarker of GC. To the best of our knowledge, this is the first study reporting that GRK3 overexpression could be used as a biomarker for predicting patient prognosis in GC.

The results of previous studies on the effects of GRK on cell proliferation were inconsistent. Jiang et al. found that proliferation was inhibited in GRK3-knockdown RKO and LoVO cells, with identical results in xenograft experiments [15]. Similar results were found in another study reporting that GRK3 is essential for the proliferation of SW620 colon cancer cells [22]. However, a study on breast cancer reported no significant differences in proliferative capacity between GRK3-knockdown 66c14 breast cancer cells and cells in the control group [13]. In the present study, we employed RNAi technology to examine the effects of GRK3 knockdown on cell proliferation in GC. GRK3 knockdown in HGC-27 cells significantly inhibited cell proliferation. Flow cytometry further revealed that GRK3 knockdown interfered with the transition from G0/G1 phase to S phase during cell cycle. This result was consistent with the results of two studies on colon cancer.

Most patients who died of GC are diagnosed when cancer cells have metastasized to other organs in the body. Further, cell invasion is closely associated with metastasis. With regards to studies on GRK3 and metastasis, Li et al. found that endothelial cell migration is significantly increased when GRK3 expression is increased. These researchers transplanted GRK3-knockdown cells into the prostate of SCID mice and found a significant decrease in tumor proliferation and metastasis. In addition, tumor microvessel density significantly increased when GRK3 was overexpressed in tumor cells, suggesting that GRK3 promoted angiogenesis. Consistent with the above conclusion, GRK3 expression was higher in metastatic tumors compared with tumors in the early stages [22]. Our statistical analysis results revealed that GRK3 expression level was significantly correlated with lymphatic metastasis, distant metastasis, TNM stage, and vascular invasion. In this study, we also examined the effects of GRK3 knockdown on cell migration and invasion in GC. GRK3 knockdown inhibited HGC-27 cell migration and invasion, suggesting a correlation between GRK3 and GC.

There were some limitations to this study. We did not conduct an in-depth examination of the mechanism by which GRK3 promotes GC and signal transduction. Therefore, our future studies will focus on answering these questions.

At present, this is the first study to explore GRK3 expression in GC, the correlation of GRK3 overexpression with clinicopathologic characteristics and patient prognosis, and its function in proliferation, migration, and invasion in GC. Our findings showed that GRK3 overexpression can be used as a biomarker for predicting patient prognosis in GC and that GRK3 can be used as a target for the treatment of GC.

This study was support by the research grant (No. CMFHR11024) from Chi Mei Medical Center, Tainan, Taiwan.