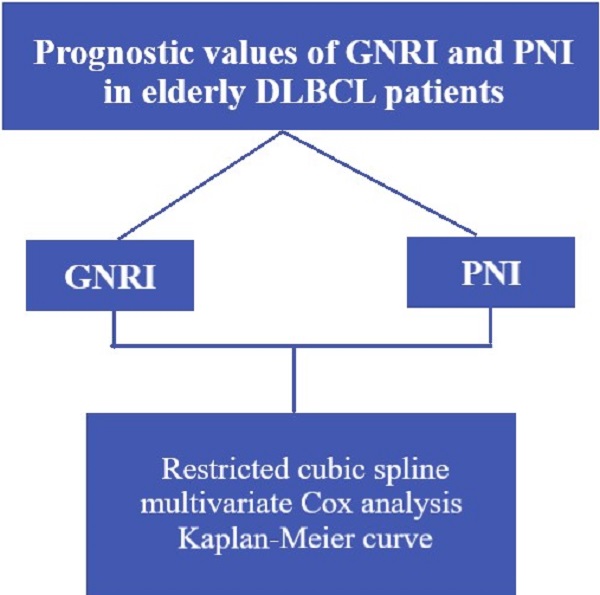 Methods: A total of 133 geriatric patients with DLBCL were recruited from Affiliated Hospital of Xuzhou Medical University, and clinicopathological variables were analyzed. X-Tile program, restricted cubic spline (RCS) and time-dependent receiver operating characteristic (ROC) analysis were used to determine optimal cut-off points of GNRI, PNI and other continuous variables; univariate and multivariate Cox proportional hazards analyses were used for variables selection; Kaplan‐Meier curve was utilized to analyze the influence of variables on prognosis; log-rank test was performed for difference evaluation between groups.

Conclusions: PNI was an independent adverse factor for elderly DLBCL and patients with low PNI in GCB group, CD5 positive group and BCL-6 positive group were with poor survival.

Diffuse large B-cell lymphoma (DLBCL) is a prevalent subtype of lymphoma and is highly heterogeneous in gene-based molecular stratification, cell-of-origin, immune markers and prognosis, accounting for about 40% of non-Hodgkin lymphoma (NHL) [1]. In the era of rituximab-based immunochemotherapy, 40% patients will develop relapse or refractory [2]. Due to complex molecular genetic characteristics, poor nutritional status and frail conditions [3, 4], few of geriatric patients are suit for intensive chemotherapy and hematopoietic stem cell transplantation. Clinical factors based prognostic systems, such as International Prognostic Index (IPI), NCCN-IPI, and GELTAMO-IPI [5-7] were used for the risk stratification of patients with DLBCL. However, these indices did not take the nutritional status of patients into account.

The nutritional status is a key factor affecting the response and prognosis of cancer patients, and about 30%-40% of patients suffer from malnutrition. Malnutrition refers to varying degrees of overnutrition or undernutrition according to the definition of American Society for Parenteral and Enteral Nutrition (ASPEN). Malnutrition can lead to many adverse clinical outcomes, including the increase of complications, morbidity, mortality, and the reduction in patient survival [8]. The aging process causes a loss of bone density and increases the risk of osteoporosis. In addition, changes in the digestive system and sensory system in elderly patients will result in a reduction in the gut motility and inappetence [9, 10]. A previous research suggested that about 50% of deaths could be attributed to malnutrition in tumors [11]. Mansoor R et al. also showed that the risk of acute mortality increased with decreasing nutrition status in mature B-cell NHL [12]. There are several highly sensitive nutritional screening tools for further diagnosis of malnutrition and appropriate interventions, such as nutritional risk index (NRI), and prognostic nutritional index (PNI) [13]. Furthermore, geriatric nutrition risk index (GNRI), a modified version of the developed NRI, is specifically for the elderly population [14]. Previous studies have shown that GNRI was a prognostic factor for esophageal, gastric, chronic kidney diseases and DLBCL [15-18]. A meta-analysis indicated that low PNI may be interpreted as adverse prognosis for DLBCL patients [19]. However, few studies have explored the effects of PNI and GNRI on the prognosis of elderly patients with DLBCL. This retrospective study aimed to evaluate the prognostic significance of GNRI and PNI in geriatric patients with DLBCL in the rituximab era.

We carried out a retrospective study of 133 newly diagnosed geriatric patients with DLBCL (≥60 years) in Affiliated Hospital of Xuzhou Medical University from January 2014 to May 2018. All patients included in this study were with pathological diagnosis of DLBCL and treated with rituximab based immunochemotherapy (R-CHOP and R-CHOP like with median treatment line of 2 (1-4)). Exclusion criteria: 1) patients with other hematological malignancies; 2) patients with special types of lymphoma (primary central nervous system lymphoma, primary mediastinal DLBCL, transformed DLBCL).

GNRI is an accurate nutrition-related risk index tool and is calculated from albumin and BMI using the formula [14]:

where: WLo is the ideal weight, which was calculated by the following formula:

where: H is the height.

PNI, based on serum albumin and lymphocytes, is a scoring system that reflects the nutritional status and immune status of patients. It is calculated from using the formula[13]:

Association between GNRI, PNI and the risk of DLBCL by using restricted cubic spline (RCS), allowing for nonlinear effects. 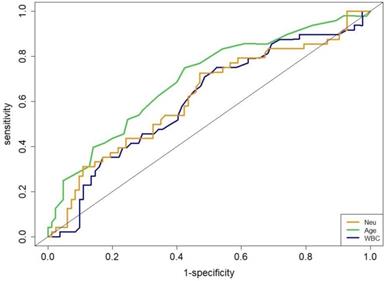 Univariate and multivariate analysis of elderly patients with DLBCL

X-Tile analysis of survival data based on DLBCL patients reveals a continuous distribution based on hemoglobin. The plots show the χ2 log-rank values produced when dividing the patients with two cut-points, producing high, middle, and low subsets.

Univariate and multivariate analyses of prognostic factors for OS

Poor nutritional status predicting an inferior survival based on (A) PNI, (B) GNRI (four groups).

Kaplan-Meier survival analysis of OS based on PNI of elderly patients with DLBCL in different IPI groups. 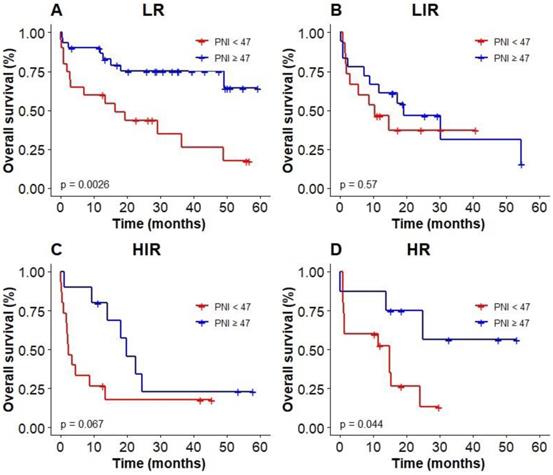 Prognostic values of PNI and GNRI among elderly patients with DLBCL

We used the optimal cut-off values calculated by RCS to evaluate the prognosis among elderly patients with DLBCL. The Kaplan‐Meier results showed patients with low PNI were associated with poor OS (P < 0.0001, with the 3-year OS of 23% vs 52%, Figure 4A), compared with high PNI patients with DLBCL. However, patients could not be accurately stratified by using the recommended cut-off values of GNRI (P = 0.13, Figure 4B). In addition, PNI successfully differentiated patients with poor prognosis in low-risk group and high-risk group (3-year OS 26.2% vs 69.3%, P = 0.003; 3-year OS 0 vs 55.2%, P = 0.044; Figure 5A, D). However, PNI could not accurately stratify patients in other groups of IPI scoring system (Figure 5B, C).

The results of subgroup analysis showed that a significant deterioration of OS in GCB, CD5 positive, and BCL-6 positive groups with malnutrition identified by PNI (Figure 6A, B, D). OS was significantly worsened by PNI in BCL-2 positive group (Figure 6C). PNI could not accurately distinguish patients among BCL-6 negative group and non-GCB group. 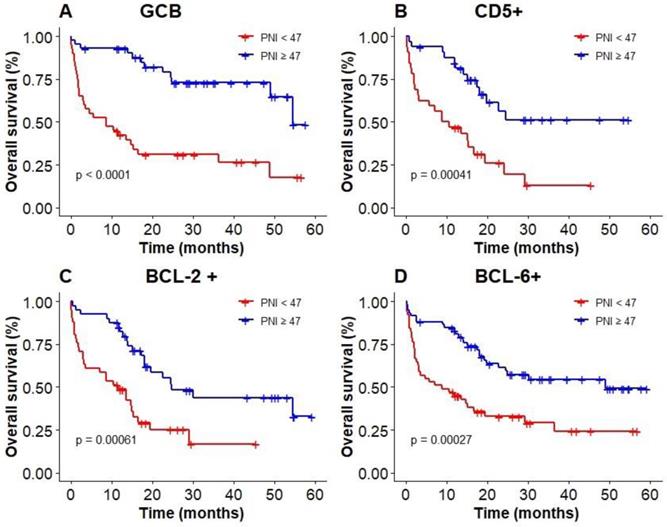 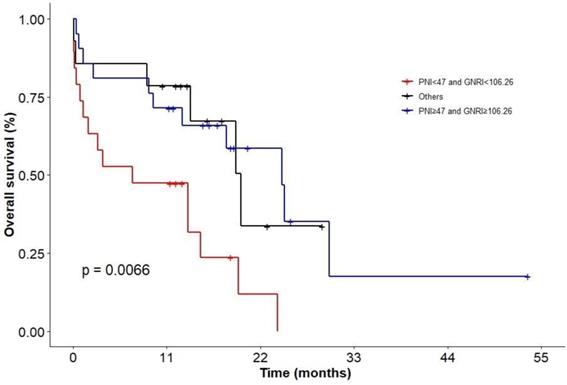 GNRI and PNI are common indicators to evaluate the nutritional status of patients. Several studies have confirmed that GNRI could be used as a prognostic factor in DLBCL patients [18, 27, 28]. In this study, we calculated the optimal cut-off value of GNRI by RCS, which could be used to accurate stratify elderly patients. Univariate analysis results revealed that GNRI had an impact on the prognosis of elderly patients with DLBCL, and patients with high levels of GNRI were with a longer survival. However, GNRI was not an independent prognostic factor for OS in multivariate analysis in our study which was consistent with the results of a previous domestic study [29].

Low level of albumin is associated with poor prognosis in cancer patients and may serve as an independent indicator for requiring aggressive nutritional interventions [30, 31]. Previous studies have shown that lymphocyte count is a prognostic factor for adverse event rates and clinical outcomes in patients with DLBCL [32, 33]. It was worth noting that in this study univariate analysis showed that albumin and lymphocyte count had no effect on prognosis of DLBCL, whereas the PNI based on the two indicators was an independent prognostic factor. It suggested that PNI could be used to evaluate the nutritional status of patients in subsequent clinical practice. In addition, we evaluated patients with combination of PNI and GNRI and the results showed that patients in status with PNI < 47 and GNRI < 106.26 had the worst survival.

In conclusion, nutritional status has an impact on the survival of elderly DLBCL patients. The results suggest that PNI can be used as an independent prognostic indictor of elderly patients with DLBCL, and PNI can predict worse prognosis of patients in GCB group, CD5 positive group, BCL-2 positive and BCL-6 positive group.