Background: The long-term survival rate of gastric cancer (GC) patients at advanced stages remains low worldwide. Circular RNAs (circRNAs) a newly studied type of non-coding RNA that play an important role in the pathogenesis and diagnosis of various diseases. In this research, we aimed to explore the functions of hsa_circRNA_101996 in GC cells and an animal model of GC.

Methods: The expression of hsa_circRNA_101996, microRNA (miR)-143, and ten-eleven translocation (TET)-2 in GC tissues, the adjacent tissues, and cell lines were determined by quantitative reverse transcription-polymerase chain reaction (qRT-PCR). Transwell assays were used to analyze the knockdown effects of hsa_circRNA_101996, miR-143, and overexpression of TET2 on cell proliferation, migration, and invasion abilities. Western blotting was used to analyze the expression of matrix metalloproteinases (MMP)2/MMP9. Binding interactions between, hsa_circRNA_101996 and miR-143 and between, miR-143 and TET2 were detected by Dual-luciferase reporter assays. Levels of protein expression were analyzed by Western blotting. Tumor models were established by subcutaneous injection of tumor cells in Bl6/Rag2/GammaC double knockout mice.

Conclusion: Our findings indicate that hsa_circRNA_101996 promotes GC development by upregulating MMP2/MMP9 through miR-143/TET2 pathway, which may provide a novel target for GC.

Gastric cancer (GC) is presently the fifth most common cancer worldwide and the third-highest cause of cancer-related deaths globally [1]. The documented survival of GC is greater than 90% for patients at the early stage, but the survival decreases to less than 20% when patients are diagnosed in the advanced stage, which is directly associated with tumor metastasis [2].

Although current treatment options for GC cancer such as surgery, radiotherapy, chemotherapy, targeted therapy, and immunotherapy are constantly updated, the therapeutic effect is limited [3]. As a result, the long-term survival rate of GC patients at advanced stages remains low worldwide [4]. Therefore, further reveal the molecular mechanisms underlying the occurrence and development of GC cancer is urgent.

CircRNAs are newly discovered endogenous non-coding RNAs which play an important role in pathological and physiological processes of cell proliferation, cell cycle, metastasis, migration, invasion, and so on [5]. There is increasing evidence shows that circRNAs play important regulators in the process of cancer development by sponging microRNAs to regulate mRNA translation [6]. However, in GC, the role and mechanisms of hsa_circRNA_101996 are not clear.

MicroRNA (miR) is a 21 to 23 nucleotide long RNA molecule that is widely found in eukaryotes and regulates the expression of other genes. Increasing studies have reported that miRs play an important role in regulating gene expression, cell cycle, and the metabolic process by specific binding with target mRNA that furthermore inhibits post-transcriptional gene expression. For example, circDLGAP4 regulated lung cancer cell migration and invasion by sponging miR-143 to modulate cyclin-dependent kinase 1 expression [7]. Interestingly, miR-143 was the target of hsa_circRNA_101996 in our study through an online bio prediction site. However, the specific role and molecule mechanism of hsa_circRNA_101996 regulating miR-143 in gastric cells remains unknown.

Ten-eleven translocation (TET)-2 is one member of the TET family of proteins, which also includes TET1 and TET3. TET2 is a crucial driver of cell fate outcomes in a myriad of biological processes through catalyzing the demethylation of 5-methylcytosine on DNA, affecting transcriptional regulation [8]. Cancer cell invasion is the fundamental of tumor metastasis. During the metastasis process, cancer cells should first degrade the extracellular matrix with the help of matrix metalloproteinases (MMPs) [9]. Among the MMPs family, the MMP2 and MMP9 are of special importance because of their ability to degrade collagen and proteoglycan [10]. Previous studies have shown that the DNA methylation status of MMP2 and MMP9 genes are aberrant in tumor tissues [10]. DNA methylation, the most common epigenetic modification, could interact with other epigenetic modifications such as histone modification, to regulate the functioning of the genome by changing chromatin architecture [11]. For mammals, the DNA methylation generally occurs in cytosine within CpG dinucleotides which are concentrated in large clusters called CpG islands. In normal cells, DNA methylation assures the proper regulation of gene transcription to maintain stable gene silencing, however, in cancer cells, the aberrant DNA methylation within the promoter regions may lead to the inactivation of certain tumor-suppressor genes or induce genomic instability and contributes to cell transformation [12]. To date, the role of TET2 in GC has never been studied.

The ethical approval, the review of informed consent, the implementation of experimental protocols, and subsequent research of this study have been approved by the Clinical Medical Research Ethics Committee (Approval number: L-D18007). Informed consent was obtained from each patient included in the study, and the study conforms according to The Code of Ethics of the World Medical Association (Declaration of Helsinki), printed in the British Medical Journal (18 July 1964).

The inclusion criteria for GC patients are: (1) Histopathologically confirmed GC; (2) Patients who completed follow-up (three years); (3) Patient who has provided informed consent; (4) No serious heart, lung, liver, kidney, and other complications; (5) No history of mental illness. The exclusion criteria for GC patients are: (1) Follow-up time is less than three years; (2) History of cancer or radiotherapy and chemotherapy treatment; (3) Patients or their families are reluctant to participate in this study. A total of seventy-nine patients with GC were included in this study, and three cases were excluded after screening by inclusion and exclusion criteria. In the end, a total of seventy-six paired GC and adjacent tissues were obtained from GC patients. Among them, 37 were males and 39 were females. The average age is 53.3±5.9 years. Besides, the plasma was collected from 76 patients with GC before and after surgery, and at the same time, plasma from 76 healthy subjects was collected.

Seventy-six patients were followed up for three years (2016-2019), and the time of death of the patients was recorded.

Six-week male Bl6/Rag2/GammaC double knockout mice were purchased (Cyagen, China) and adaptively fed for one week. Unlike NOD-SCID mice, these mice lack T-, B- and NK-cells but show no spontaneous tumor formation and have a normal hematopoietic function. Mice were housed in a facility with a 12 h light/dark cycle maintained at 25±0.5 °C and 50% to 60% humidity.

The xenograft GC model was established as described before [13]. Briefly, mice were anesthetized a ~0.5 cm incision was made in the mid-abdomen to expose the stomach. Tumor cells were prepared as a single cell suspension. For each mouse, 1×106 cells in 50 µl matrigel were injected into the serious side of the stomach. Then the stomach was returned to the abdominal cavity and the incision was closed layer by layer using absorbable sutures. After the surgery, mice were continued fed for 6 weeks. The tumor size was measured using a vernier caliper.

Short hairpin RNA for hsa_circRNA_101996 (shCircR_101996), small interfering RNA for miR-143 (simiR-143), and TET2 (siTET2) were purchased (Hippobio, China) and were used to knock down the target transcription. Mimic for miR-143 was also purchased (Hippobio, China) and was used to overexpress miR-143. The transfection was conducted using Lipofectamine 3000® Transfection Reagent (Invitrogen, USA) according to the manufacturers' instructions. The primer sequences used for simiR-143 and siTET2 were as follows: 5′-AGCATGGTCCGCGTATCGCGTdTdT-3′ (forward) and 5′-ACGCAATTGUUCGGAGAAdTdT-3′ (reverse) for simiR-143; 5'-GTGCGGCACTTGCCGGACAATCdTdT-3' (forward) and 5'-CCCGGTGTCACTGCGCACGdTdT-3' (reverse) for siTET2.

pPLK-CircR_101996, pPLK-miR-143, and pPLK-TET2 were constructed by Public Protein/Plasmid Library (Jiangsu, China) to permanently knockdown hsa_circRNA_101996, miR-143, and TET2 respectively. pLV-CircR_101996 and pLV-miR-143 were used to permanently overexpress hsa_circRNA_101996 and miR-143 respectively. The empty vector was used as the control (NC). All these vectors were packaged with lentivirus. Viral supernatants were used to transduce cells. Stable transductions were selected by growth in media containing Ampicillin.

Subcellular localization of CircR_101996 was identified with fluorescence in situ hybridization (FISH) method using a Ribo™ FISH Probe Mix (Green) (RiboBio) according to the manufacture's protocol. Then, the nuclear and cytoplasmic RNA was separated to further confirm the distribution of CircR_101996 in cells.

The proteins of TET2, MMP2, MMP9, and Tubulin were tested by Western blot. The rabbit anti-TET2 (1:2000), MMP2 (1:1000), MMP9 (1:1000), and Tubulin (1:3000) antibodies were added overnight at 4 °C. The secondary antibody was then added and incubated at room temperature for 0.5 h the next day. Immunoreactive bands were visualized with an ECL kit (Promoter, Wuhan, China) and pictured by GeneGnome5 Chemiluminescence Series Image Capture (Syngene, Frederick, MD, USA) according to manufacturers' instructions. Blot densitometric analysis was done by ImageJ software (NIH, USA).

Transwell invasion assay was performed as described in the earlier study [16]. The migrated cells in random three visual fields were photographed and counted under a microscope (Olympus, Tokyo, Japan).

All experiments were performed in triplicate unless specified. Results were represented as the Mean ± SEM. Statistical analysis was performed using unpaired Student's t-test or F test. The overall survival rate of the patients was measured by the Kaplan-Meier method, and the survival rate between the groups was compared by a log-rank test. P<0.05 was considered significant.

hsa_circRNA_101996 is upregulated in GC tissues 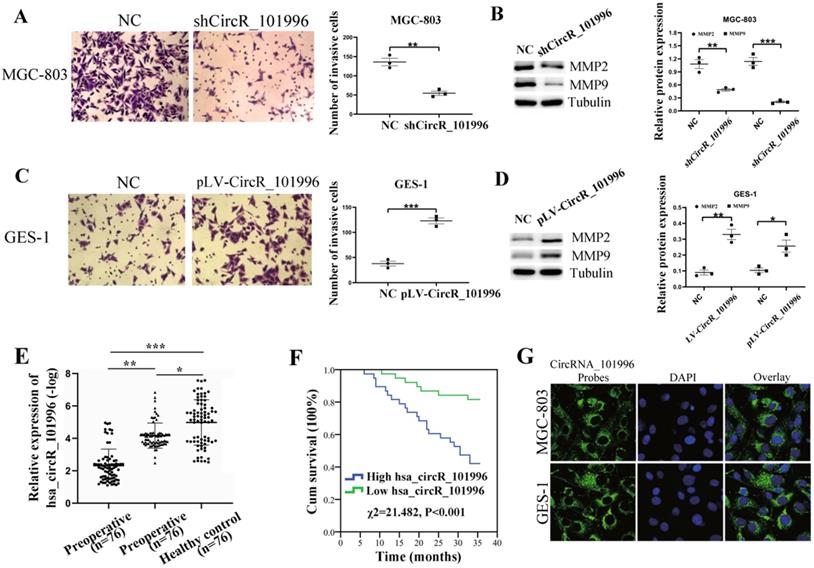 To clarify the relationship between TET2 and MMP2/MMP9, MGC-803 was transfected with siTET2 to knock down TET2 expression. Compared to the NC group, the expression of MMP2/MMP9 and the cell invasive ability were decreased in the siTET2 group (Figure 4A). ChIP assay showed that TET2 could bind to the CpG islands in the promoter and Exon 1 of the MMP2/MMP9 gene directly (Figure 4B, C). We next analyzed the DNA methylation levels of CpG islands in the MMP2/MMP9 promoter and Exon 1. As the results showed, in MGC-803 cells, knockdown of hsa_circRNA_101996, overexpression of miR-143, and knockdown of TET2 could all enhanced the methylation of CpG islands, while in GES-1 cells, overexpression of hsa_circRNA_101996 and knockdown of miR-143 could both lead to the hypermethylation of CpG islands (Figure 4D).

Growing studies have revealed that circRNAs have the function of gene regulation [17]. Increasing evidence has suggested that many CircRNAs, are closely related to the process of cancer development [2]. CircRNA functions as a miR sponge to reduced miR expression and function further to indirectly regulate the expression of target genes [18]. hsa_circRNA_101996 is associated with cervical cancer [19,20]. So far, the association between GC and hsa_circRNA_101996 has not been studied much. Therefore, we initially tested whether hsa_circRNA_101996 was dysregulated in GC, clarified its effect on GC cell proliferation in vitro, and clarified the underlying mechanisms. 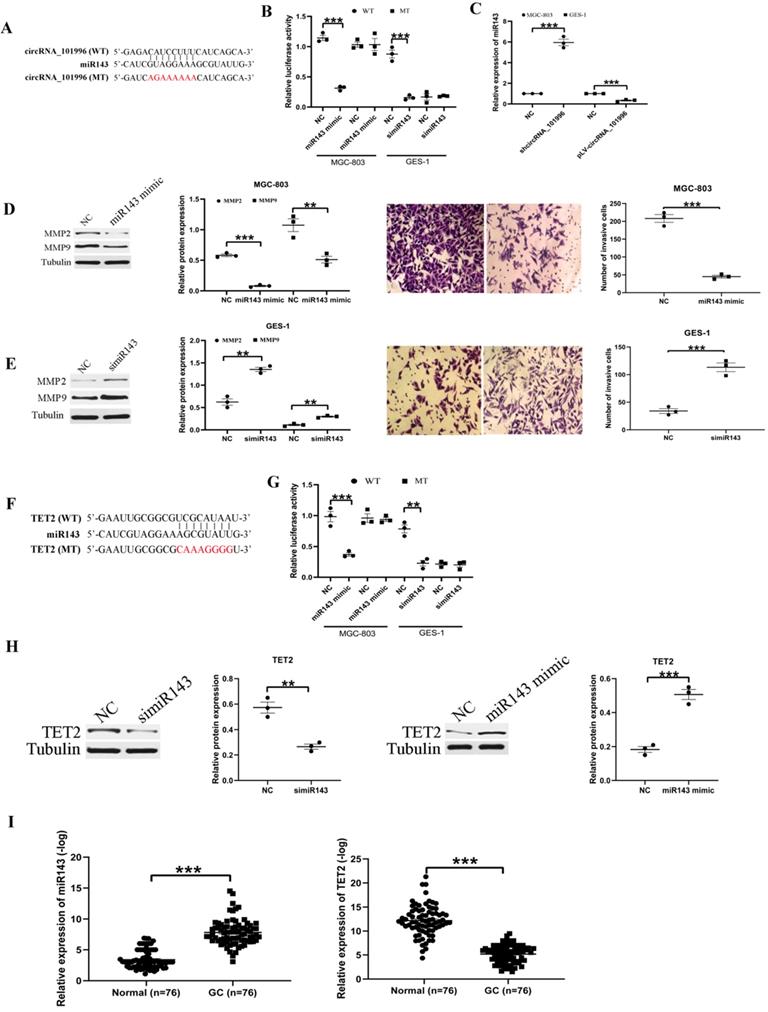 TET2 regulates MMP2/MMP9 expression through the epigenetic pathway. (A) MGC-803 showed lower MMP2/MMP9 expression and decreased invasive ability after TET2 knockdown. (B-C) ChIP assay showed that TET2 could bind to the CpG islands in the promoter and Exon 1 of the MMP2/MMP9 gene directly. (D) Overexpression of hsa_circRNA_101996 and knockdown of miR-143 could both lead to the hypermethylation of CpG islands. **, P<0.01; ***, P<0.001. 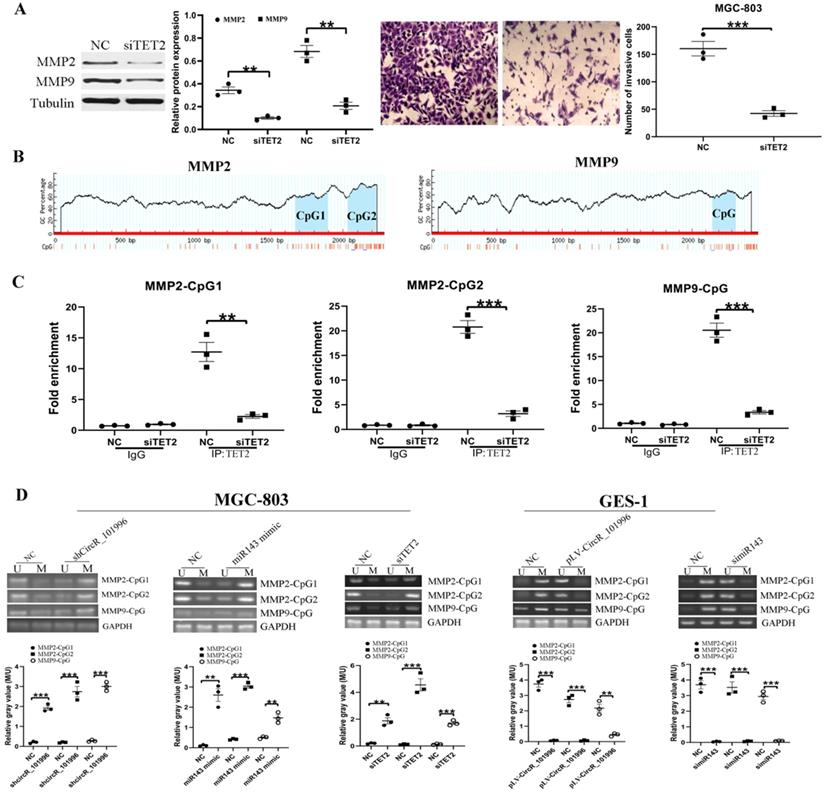 We next explored the molecular mechanisms underlying the oncogenic action of hsa_circRNA_101996 in GC. As we know, circRNAs can perform biological functions by acting as molecular sponges to inactivate miRs. MiR-143 has been reported to be downregulated in esophageal cancer [21], bladder cancer [22], pancreatic ductal adenocarcinoma [23], and lung cancer [24], indicating that miR-143 may exert tumor-suppressive effects in these cancers. Our results showed that hsa_circRNA_101996 could bind to miR-143. Moreover, knockdown of hsa_circRNA_101996 in MGC-803 increased the miR-143 level, while its overexpression in GES-1 led to the decrease of miR-143. Our data showed that the expression of miR-143 was accordingly decreased in GC tissues compared to the adjacent tissues.

Furthermore, another important finding of our study was that TET2 was verified as a target of miR-143, and TET2 expression was negatively regulated by miR-143. Besides, suppressing hsa_circRNA_101996/TET2 or overexpressing miR-143 inhibits tumor growth in vivo. TET2 was reported more associated with gene bodies and enhancers than with CpG-rich promoters [25]. MMP-2 and MMP-9 are two key enzymes in the process of cancer cell invasion and metastasis. The activation of the two can form type IV collagenase, degrade the extracellular matrix, destroy the complete basement membrane, promote the infiltration of surrounding tissues by cancer cells, invade blood vessels and lymphatic vessels, and metastasize [26,27]. In this study, we found that in MGC-803 cells, knockdown of hsa_circRNA_101996, overexpression of miR-143, and knockdown of TET2 could all enhanced the methylation of CpG islands, while in GES-1 cells, overexpression of hsa_circRNA_101996 and knockdown of miR-143 could both lead to the hypermethylation of CpG islands. 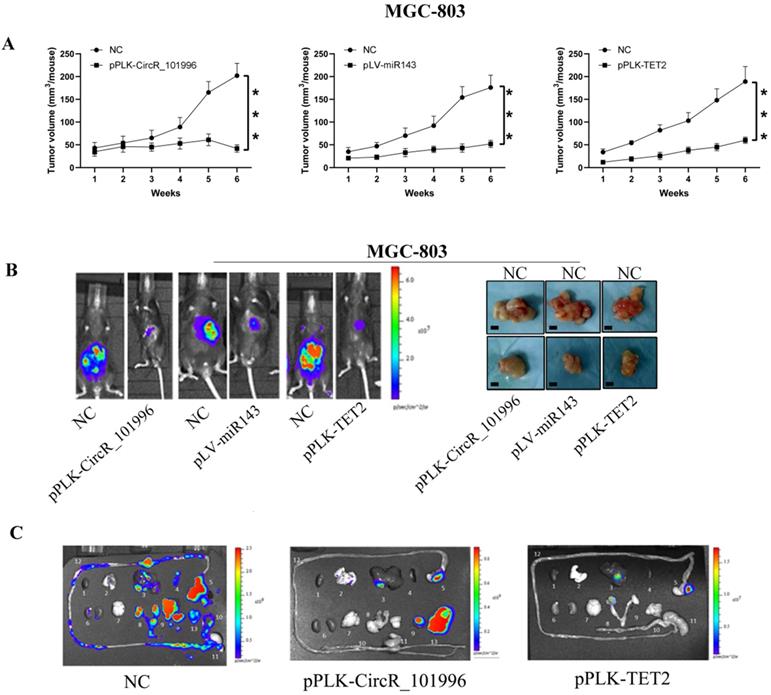