Objective: The aim of this study was to evaluate the prognosis of patients with metastatic prostate cancer (mPCa) in different age groups.

Methods: Patients with mPCa from 2004 to 2016 in the Surveillance, Epidemiology and End Results (SEER) database were identified. Seven groups were divided according to the age at diagnosis, including ≤55 years, 56-60 years, 61-65 years, 66-70 years, 71-75 years, 76-80 years and >80 years. Fine and Gray's competing risks model and Kaplan-Meier analysis were conducted to evaluate the cancer-specific survival (CSS).

Conclusions: The mPCa patients ≤55 years seemed to be associated with worse prognosis in comparison with patients aging 56-70 years.

Prostate cancer (PCa) is the most common malignant tumor in the male genitourinary system, seriously threatening the life and health of men [1, 2]. By 2020, it was estimated that more than 191,930 men would be newly diagnosed with PCa and 33,330 cases would be dead for PCa [3]. Although there are some radical treatments with excellent long-time prognosis for localized prostate cancer, the prognosis of men with metastatic prostate cancer (mPCa) were rather poor. The common metastatic sites of prostate cancer include bones, distant lymph nodes, liver, and thorax lumbar spine [4, 5]. Metastasis will occur in approximately 15-33% initial PCa diagnosis within 2 years and has a significant influence on mortality among the population [6]. Androgen deprivation therapy (ADT) is the first-line treatment for men with metastatic prostate cancer, which is usually associated with a good effect at the beginning of treatment [7, 8]. The majority of patients with mPCa will progress to castration-resistant prostate cancer (CRPC) despite intensive ADT. Once this disease progresses to the castration-resistant stage, the patients are under a substantially great risk of mortality with a median survival time of 15 months [9].

Although the overall prognosis of mPCa patients is rather poor, the survival time of each individual is quite different. The detailed survival time of patients is affected by many factors, such as age, ethnicity, genetic factors etc. [10, 11]. In addition to tumor factors, age is one of the most important factors that has great effects on the prognosis of men with mPCa [10]. The incidence of prostate cancer is highly correlated with old age. PCa is very rare among young patients and might be more aggressive in terms of biological behavior. Zheng et al. [11] reported that younger patients were associated with significantly worse outcomes in high-risk group patients. For young patients with mPCa, the detailed survival outcomes remain inconclusive.

In this study, we aimed to analyze the prognosis of mPCa patients in different age groups, and to compare the survival outcomes of young patients with patients of other ages.

The data of this study were extracted from the SEER database from January 1, 2004, to December 31, 2016. Metastatic PCa patients were retrospectively identified with the software of SEER* STAT. The general information and tumor information were collected.

Inclusion criteria: (1) patients were diagnosed with metastatic PCa (M1 stage). (2) The age of patient at diagnosis was clearly known.

Exclusion criteria: (1) Multiple primary cancers; (2) Important information such as age at diagnosis, M stage, and follow-up time was unknown; (3) The survival status and causes of deaths were unclear at the end of follow up.

The main outcome in this study was defined as cancer-specific survival (CSS). The survival time was from the patient's first diagnosis to the patient's death or the last follow-up time (December 31, 2016).

Baseline characteristics in seven age groups were presented with frequency and percentage or median and interquartile range (IQR). The Kaplan-Meier (K-M) analysis was conducted to construct the survival curves, and to calculate survival time and survival rates. Hazard ratios (HRs) and their 95% CIs were used to calculate the degree of risk between different age groups. In order to eliminate the interference of death caused by other reasons except prostate cancer-specific death, we re-analyzed the survival outcomes of the cohort without patients dead for other reasons. The competing risks model with Fine-Gray analysis was also introduced into our analysis. The Fine and Gray's competing risks model provides a useful alternative to Cox regression in the presence of one or more competing risks. It focuses on the cumulative incidence function, which indicates the probability of the event of interest happening before a given time. Subdistribution hazard ratio (sdHR) was calculated with their 95%CI in this model. All statistical analyses in this study were performed with the software of SPSS version 25, Graphprism 7.2 and STATA 14.0. P < 0.05 was considered statistically significant.

Survival curves and survival time of the overall cohort 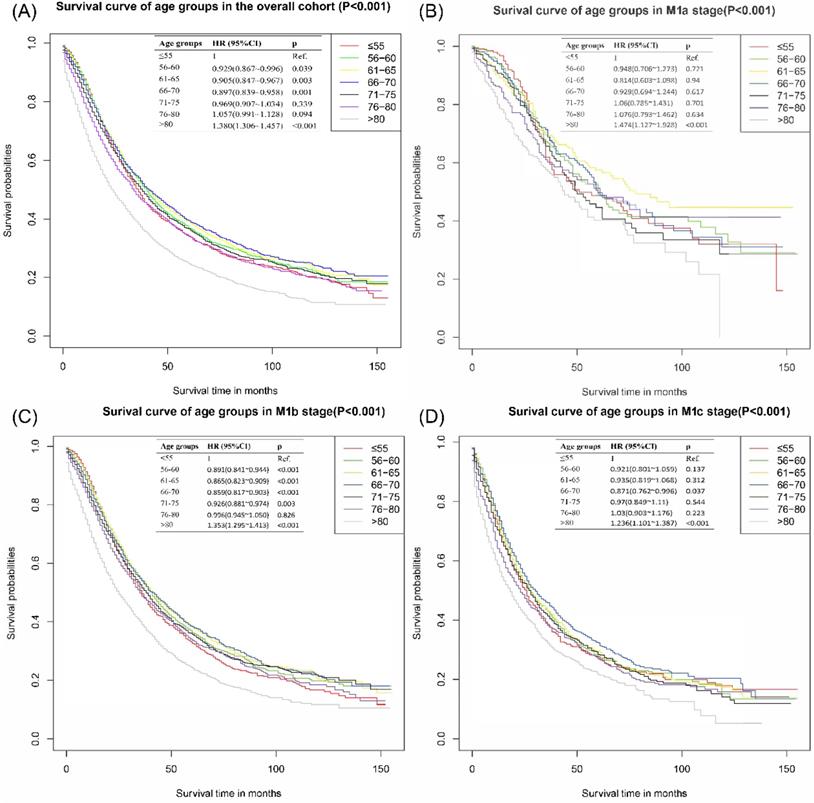 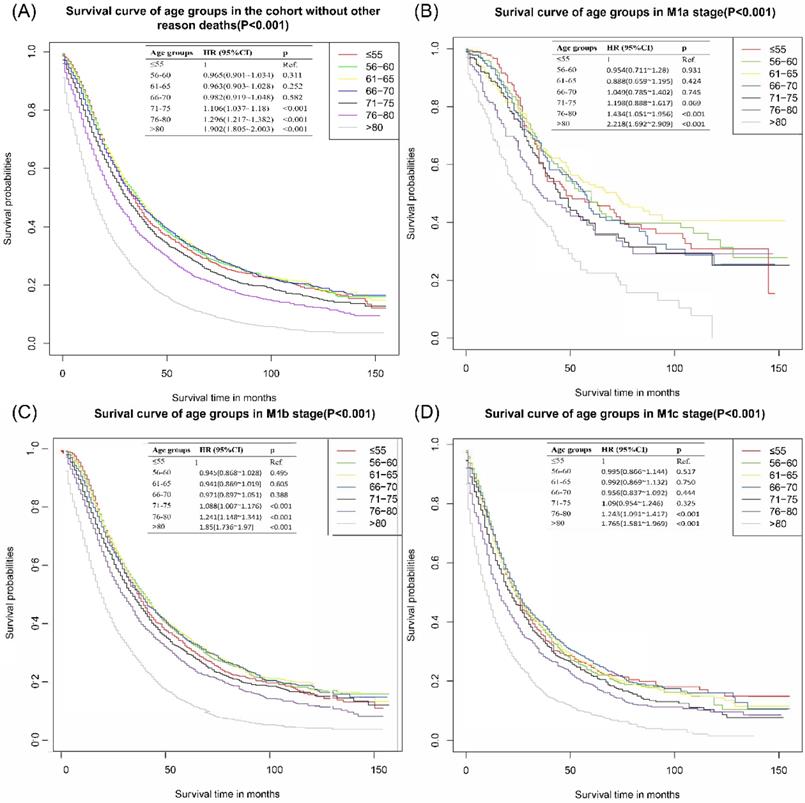 Although early-stage PCa can usually be cured by radical surgery, the prognosis for patients with distant metastasis is rather poor even with the optimal treatment. Once prostate cancer reaches the metastatic stage, the average life expectancy of patients will be severely reduced [12]. Age is an important factor which has great effects on the prognosis of individuals. mPCa in young patients seems to be more aggressive and poorly differentiated. The prognosis of young patients with mPCa has not been evaluated in detail.

Our results found that the survival outcomes of patients ≤55 years were significantly worse than those of patients aged 56-60 years, 61-65 years and 66-70 years, similar to those aging 71-75 years. These results had been proven by some previous studies. Kimura et al.[13] found the 5-years overall survival rates in the young group (aged ≤55 years) were significantly worse than those in the middle-aged (aged ≥56 and ≤65 years) and elderly groups (aged ≥66 and ≤75 years) in patients with stage IV disease with metastasis. Hamstra et al. [14] revealed that older age was associated with decreased metastasis and prostate cancer-specific death for men with localized advanced prostate cancer. They found that the cancer in older men was less aggressive, and was independent of other clinical features. Humphreys et al. [15] also showed a trend towards worse survival in patients aged <55 years. On the contrary, some studies found older patients (>70 years or even older) had a poorer prognosis than the younger [16, 17]. Guo et al. [18] demonstrated that younger patients (≤70 years old) with bone and lung metastases presented better survival outcomes than those with other types of metastasis or older age.

To avoid the interference caused by other-reason deaths, we reanalyzed the survival outcomes of the cohort without men dead for other reasons and introduced the competitive risk model. Our results reported that young patients (≤55 years) still had slightly worse survival outcomes than patients aged 56-60 years, 61-65 years and 66-70 years, especially for patients in 61-65 years group. Similarly, Bernard et al. [19] revealed that men aged <55 years presented second worst prognosis with lower median PCSS and a higher cumulative incidence of death due to PCa compared with patients aged 55-64 years and 65-74 years.

Some previous studies accounted for the results in this study. Compared with older mPCa patients, younger patients were associated with more aggressive and much advanced stages, resulting in worse outcomes [20-22]. Though some studies reported more favorable outcomes in younger patients, the differences of detection and screening methods and patient selection may contribute to these discrepancies [23]. Another possible explanation for worse prognosis in the men aged ≤55 years in comparison with the older is that the incidence of BRCA1 and BRCA2 mutation is much higher in young men (aged <65 years) [24] and the BRCA1/2 mutation is correlated with poor prognosis. Men with BRCA1/2 mutation were more likely to have a higher Gleason score and worse prognoses than non-BRCA2 carriers.

There were some limitations in our study. First, this was a retrospective analysis along with some unavoidable confounders and risk biases, which may lead to incompletion of clinical information. Second, limited by the data we could obtained, some factors such as detailed treatments, financial situation, etc. were not analyzed in our study. Our results might be influenced by these factors. Therefore, more high-quality studies are needed in the future to verify our results.

For mPCa, the prognoses of young patients (≤55 years) were slightly worse than those aged between 56 and70 years. However, considering the limitation in our study, more high-quality studies are needed in the future.

All data was from the public database and no ethical approval was required.

The data for constructing models was obtained from the SEER database which is publicly available.