Gastric cancer is one of the most common malignant tumors and the second leading cause of cancer mortality worldwide [1]. There were about one million cases that were diagnosed with gastric cancer worldwide each year, most of which occurred in East Asia [2]. Although clinical researchers have made great progress in the treatment of gastric cancer, including surgical excision, new adjuvant chemo-radiotherapy, gene-targeted therapy and other comprehensive therapies, the overall survival time of gastric cancer patients remains unfavorable [3]. Due to the lack of effective therapy, successful clinical management of metastatic GC remains a major challenge. Therefore, there is an urgent need to elucidate the molecular mechanism of gastric cancer progression and find novel diagnosis markers and therapeutic targets for gastric cancer patients.

Long noncoding RNAs (lncRNAs) are transcripts with more than 200 nucleotides in length and are unlikely to be translated to proteins [4]. Numerous evidences have reported that lncRNAs play important roles in a variety of biological process, including chromatin modifications, transcriptional regulation, post transcriptional and other modes of gene expression regulation, and signal pathway regulation [5]. It is well documented that aberrant expressions of lncRNAs are correlated with various types of cancer [6-8]. Emerging roles of lncRNAs in cancer are involved in tumor initiation, apoptosis, immune escape, metabolic disorders, cancer cell stemness and metastasis [9].

Cells were washed with ice cold PBS for three times, fixed in 4% paraformaldehyde at 4 °C for 1 h, and treated with 0.1% Triton X-100 at room temperature for 15 min. Then, cells were blocked with 5% BSA in PBS, incubated with antibodies against LC3 (1:500, Abcam, UK) overnight at 4 °C. After washing with PBST, cells were treated with Cy3-conjugated secondary antibodies (1:1000, Jackson ImmunoResearch, USA) for 1 h. DNA was stained with DAPI. The mounted coverslips were photographed by confocal fluorescence microscopy LSM510 (Zeiss, Germany).

Total RNAs from AGS cells or GES-1 cells were extracted with TRIzol Reagent (Invitrogen, USA). Northern blotting was carried out according to previous report [11]. Briefly, 15 μg total RNA was separated on a 1.2% denaturing agarose gel with formaldehyde and transferred to Hybond N+ membrane (GE healthcare, USA). Digoxigenin-labeled RNA probes were prepared through in vitro transcription. The membrane was hybridized with denatured RNA probes at 60 °C for 16 hr, followed by incubation with anti-digoxigenin-AP (Roche, Switzerland). The results were analyzed using chemiluminescent imaging instrument (Clinx, China).

MTT (3-(4,5-dimethylthiazol-2-yl)-2,5-diphenyltetrazolium bromide) assays were performed at 24 h, 48 h, 72 h and 96 h post transfection. Cells with indicated transfection were seeded to 96-well plate with 3000 cells/well. At the indicated time point, cells were incubated with MTT (5 mg/ml, 20 μl) for 4 h at 37°C. Then discarded the medium, added 150 μl of dimethyl sulfoxide until the cysts were completely dissolved. The cell amount was analyzed by measuring the absorption at 490 nm with a spectrophotometer. On the other hand, at the indicated time point, the cultured cells were photographed under bright field. The cell number was counted from random six fields. Each assay was independently repeated three times.

Cells were harvested 36 h after transfection. Cells (5×104 cells per well) were seeded to upper chambers of transwell inserts (8-μm pore, Corning, USA) in medium with 1% FBS. Medium supplemented with 10% FBS was added in the lower chamber. After incubation for 18 h, the migrated cells were stained with fluorescent dye 4'-6-Diamidino-2-phenylindole (DAPI, Sigma, USA) and quantified by counting in six random × 100 fields. Each assay was independently repeated three times.

Cells with indicated transfection were seeded in 24-well plates and allowed to grow at a density that reached 90% confluence. The monolayer cells were scratched with yellow pipette tips. Images were taken at 0 h, 12 h, 24 h after scratch. The wound healing distance was quantified by counting in five fields. Each assay was independently repeated three times.

The animal studies were approved by the Animal Care and Use Committee of Zhejiang University. Nude mice (5-6 weeks old) were cultured in SPF facilities, with individually ventilated cages and in a 12 h light-dark cycle with ad libitum access to food and water. For lung metastasis assay, we established LIT3527-depleted BGC-823 cells by lentivirus-based shRNAs. 106 BGC-823 cells were inoculated into nude mice (n = 5) via tail-vein injection. After 5 weeks, the mice were sacrificed. The gross lungs were photographed and metastatic nodules were counted.

Statistical analyses were performed using the GraphPad Prism 8 software. The intensity of immunoblot band was quantified by Image J software. Results were presented as the mean ± SD, and P < 0.05 was considered to be statistically significant. 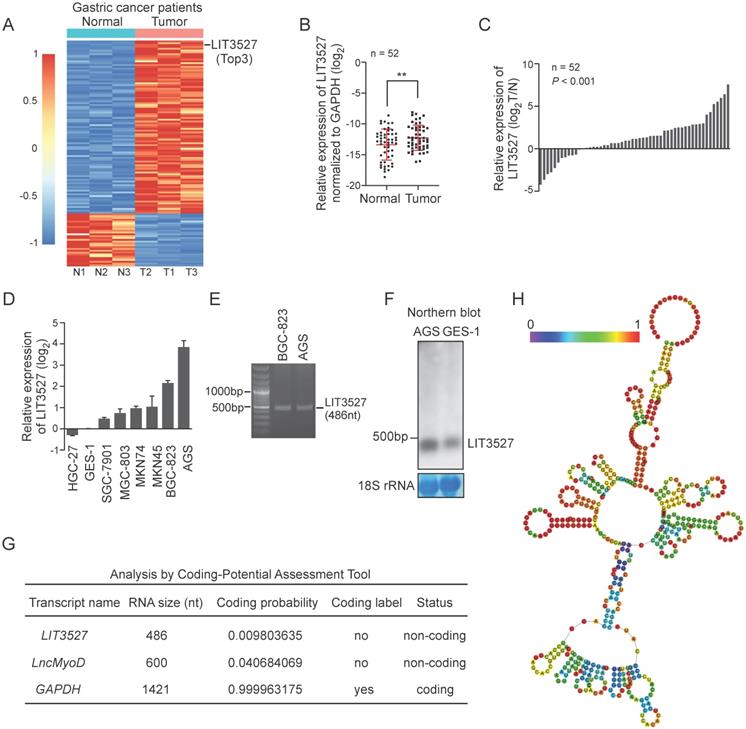 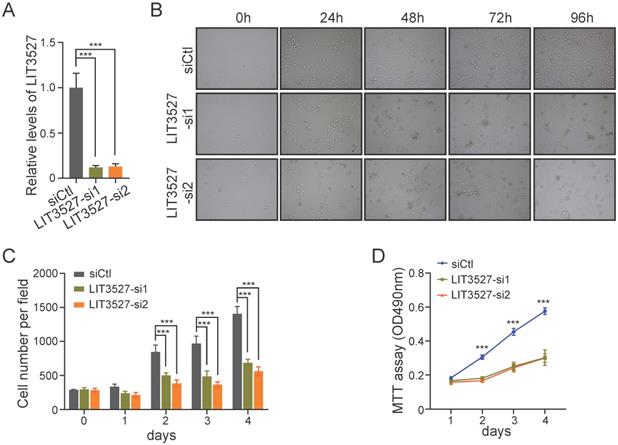 LIT3527 is a 486-nucleotide (nt) sense transcript. To study the gastric cancer related lncRNA LIT3527, we cloned the LIT3527 from gastric cancer cells (Fig. 1E). We designed a specific RNA probe for LIT3527 and it was detectable at its expected size in AGS cells and GES-1 cells by northern blot (Fig. 1F).

To further investigate the biological functions of LIT3527 in gastric cancer progression, we designed two different siRNAs against LIT3527. LIT3527 was dramatically silenced in AGS cells (Fig. 2A). We observed that AGS cells transfected with LIT3527-siRNAs displayed notable inhibition of cell proliferation as shown by bright field photographs (Fig. 2B) and the cell number counting at indicated time points (Fig. 2C). We also knocked down LIT3527 in BGC823 cells and performed MTT assays. Similar results were observed that knockdown of LIT3527 expression significantly inhibited the cell proliferation of BGC823 cells (Fig. 2D). These results indicate that LIT3527 is essential for gastric cancer cell proliferation.

We tried to explore the possible mechanisms underlying the effects of LIT3527 on cell proliferation and migration. We applied flow cytometry analysis to examine cell cycle and found that depletion of LIT3527 in AGS cells had no significant effect on cell cycle (Fig. 4A, B). Interestingly, we observed a notable increase in the percentage of sub-G1 phase, suggesting that knockdown of LIT3527 induced cell death of gastric cancer cells (Fig. 4C). Both bright field photographs and DAPI staining displayed the severe cell death induced by depletion of LIT3527 (Fig. 4D, E). These results suggest that LIT3527 is essential for gastric cancer cell survival but not cell cycle.

Knockdown of LIT3527 inhibits cell migration of gastric cancer cells. (A and B) Transwell assays were performed to examine the cell migration of gastric cancer cells. AGS cells were transfected with scrambled siRNA control, or two different siRNAs targeting LIT3527. Cells were seeded in the upper chambers. AGS cells were allowed to migrate for 18h. The migrated cell were stained with DAPI and photographed. The representative views were shown (A). The number of migrated cells were counted (B). (C and D) The AGS cells transfected with indicated siRNAs were subjected to wound healing assay. The scratch distances were measured at the 12h and 24h. The representative views were shown (C). The migrated distance were quantified (D). Data are shown as mean ± SD. ***P < 0.001; Student's t test (B, D). 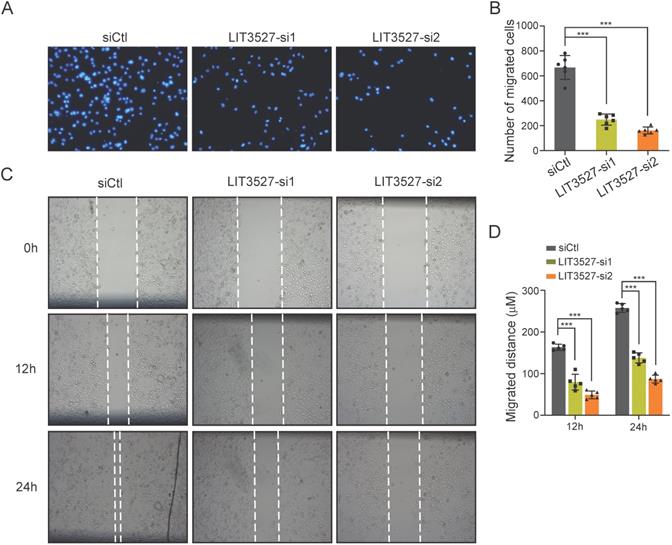 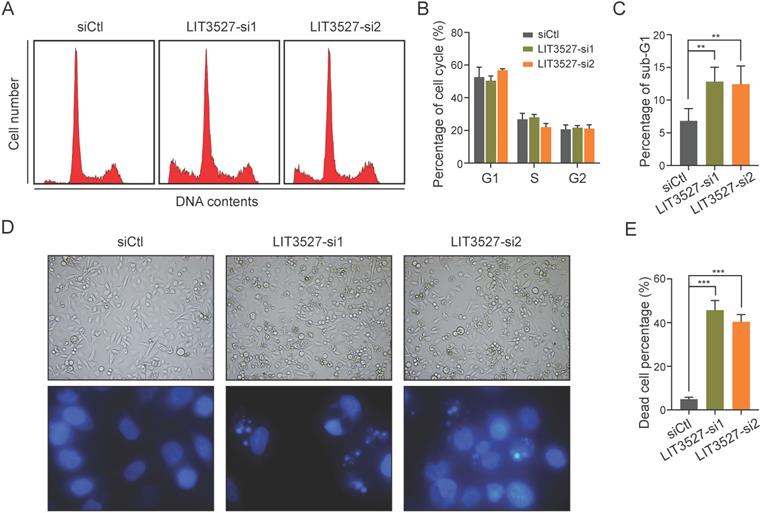 Knockdown of LIT3527 induces apoptosis and autophagy of gastric cancer cells. (A and B) AGS cells transfected with indicated siRNAs were applied for flow cytometry analysis with FITC-conjugated annexin V and propidium iodide staining. Knockdown of LIT3527 induces cell apoptosis of AGS cells. (C and D) Immunofluorescence analysis of cell autophagy with LC3 antibody. AGS cells transfected with indicated siRNAs were starved with serum for 24h or not. 3-MA is a specific inhibitor of cell autophagy. Representative views were shown (C). The percentage of LC3-positive cells was quantified (D). (E) The indicated AGS cells were subjected to western blot analysis. Antibodies against LC3, GAPDH were used. Data are shown as mean ± SD. **P < 0.01, ***P < 0.001; Student's t test (B, D). 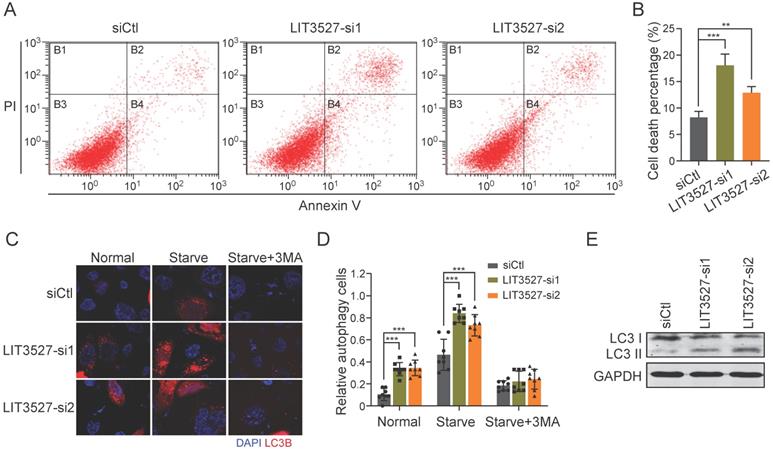 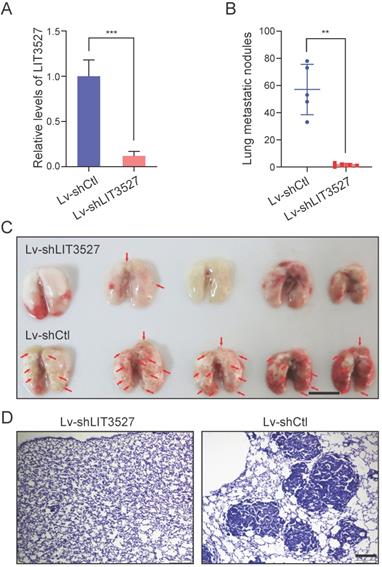 Considering the functions of LIT3527 in apoptosis and autophagy of gastric cancer cells, we analyzed several pathways and found that mTOR pathway was involved. Western blot analysis showed that depletion of LIT3527 dramatically decreased the phosphorylation of mTOR and its downstream 4EBP1 (Fig. 6A, B). AKT and ERK, as the upstream of mTOR, were also obviously inhibited by knockdown of LIT3527 (Fig. 6A, B). These results suggest that LIT3527 regulates cell survival of gastric cancer cells may through modulating mTOR signaling.

Cell autophagy is characterized by the degradation of cellular organelles, which was considered as an energy source. It plays critical role for maintaining cellular homeostasis [27]. Therefore, although autophagy is one of the two main types of programmed cell death, it functions as both an oncogenic and ant-tumorigenic process in cancer [10]. During the autophagy process, cytosolic LC3 (LC3-I) was transformed to LC3- phosphatidylethanolamine conjugate (LC3-II), which was recruited to autophagosomal membrane. Therefore, the autophagosomal marker LC3-II can reflect the autophagy activity [28]. In this study, we found that depletion of LIT3527 induced significantly increased LC3-II/LC3 levels and LC3 puncta, suggesting that LIT3527 is involved in modulating gastric cancer cell autophagy. Although many lncRNAs have been reported to regulate cell proliferation or apoptosis, little is known about the role of lncRNAs in autophagy of gastric cancer cells. LncRNA JPX enhanced gastric cancer malignancy by regulating CXCR6 and autophagy via blocking miR‑197 [29]. Knockdown of lncRNA CCAT2 inhibited cell viability and cell cycle, and promoted the apoptosis and autophagy of gastric cancer cells may though blocking mTOR signaling [30]. Another research identified a gastric cancer related-lncRNA HAGLROS, which modulated mTOR activity through sponging miR-100-5p, thereby promoted cell proliferation, migration and inhibited autophagy [31].

The mTOR pathway integrates both intracellular and extracellular signals and acts a pivotal role in cell homeostasis, including cell metabolism, cell growth and survival through phosphorylation of its downstream substrates that include 4E-binding protein 1 (4EBP1), S6 kinase (S6K) and others [32]. Therefore, mTOR pathway was considered as a therapeutic target for cancer, including gastric cancer [33]. Several studies have reported that high levels of phosphorylated mTOR were correlated with advanced tumor stage and unfavorable survival [34, 35]. Everolimus, as an mTOR inhibitor used in clinic, is active and well-tolerated in gastric cancer patients with chemotherapy-refractory metastasis [36]. LncRNAs were also involved in modulating mTOR pathway in gastric cancer. LncRNA NORAD inhibited apoptosis and promoted proliferation of gastric cancer cells by inhibiting miR-214 expression and activating Akt/mTOR pathway [37]. LncRNA HAGLROS upregulated mTOR expression through sponging miR-100-5p. On the other hand, HAGLROS can bind with mTORC1 components to activate mTOR pathway, thereby maintained gastric cancer malignancy [31]. Here, we found that knockdown of LIT3527 obviously suppressed phosphorylation of mTOR and downstream substrate 4EBP1. AKT and ERK, the two major upstream of mTOR, were also inhibited by depletion of LIT3527, suggesting that LIT3527 is involved in maintaining activity of mTOR pathway. It is of great interest to investigate how LIT3527 regulating mTOR pathway in future.