The RNA binding protein TRA2A, a member of the transformer 2 homolog family, plays a crucial role in the alternative splicing of pre-mRNA. However, it remains unclear whether TRA2A is involved in non-coding RNA regulation and, if so, what are the functional consequences. By analyzing expression profiling data, we found that TRA2A is highly expressed in esophageal cancer and is associated with disease-free survival and overall survival time. Subsequent gain- and loss-of-function studies demonstrated that TRA2A promotes proliferation and migration of esophageal squamous cell carcinoma and adenocarcinoma cells. RNA immunoprecipitation and RNA pull-down assay indicated that TRA2A can directly bind specific sites on MALAT1 in cells. In addition, ectopic expression or depletion of TRA2A leads to MALAT expression changes accordingly, thus modulates EZH2/β-catenin pathway. Together, these findings elucidated that TRA2A triggers carcinogenesis via MALAT1 mediated EZH2/β-catenin axis in esophageal cancer cells.

Esophageal cancer ranks eighth among the most common malignant tumors in the world and sixth in terms of mortality [1]. There are two histological types of esophageal cancer, adenocarcinoma (EA) and squamous cell carcinoma (ESCC). The occurrence of different types of esophageal cancer has obvious regional and ethnic characteristics [2], because ESCC is more predominant in East Asia countries [3]. Statistics in the past few years have shown that esophageal cancer affects the lives of more than 450,000 people around the world and its incidence is increasing rapidly year by year [4-6]. The 5-year survival rate of patients with esophageal cancer is only 15-25% [7]. Since it cannot be diagnosed in the early stage and has spread in the late stage, the prognosis is unfavorable [8, 9]. Therefore, the identification of the key determinant and its molecular regulatory mechanisms in esophageal cancer is of great importance for the development of diagnosis biomarker and therapeutic targets.

The RNA binding protein TRA2A (Transformer 2 Alpha Homolog) is initially identified as a splicing regulator in mammalian gender determination [10, 11]. In human it is located on chromosome 7 and consists of an RNA recognition motif and two arginine/serine domains located on both sides of the motif [10]. In recent years, the role of TRA2A in cancer has been receiving increasing research attention. First, TRA2A is found abnormally expressed in tumors. Meta analysis of gene profiling data showed that TRA2A up-regulation was strongly associated with liver cancer [12]. In pediatric pineal germinomas, TRA2A has consistent chromosomal changes, dys-regulated methylation patterns and is over-expressed in neuronal processes [13]. In glioma, whole exome sequencing have shown somatic mutation of TRA2A in chemotherapy patients [14]. TRA2A is high expressed in SHG44 cell to increase proliferation, migration, invasion and epithelial to mesenchymal transition [15]. Second, TRA2A promotes tumorigenesis via regulating the splicing process. For example, Angulin proteins ILDR1 and ILDR2 involved in alternative pre-mRNA splicing by binding to TRA2A and other splicing factors [16]. In triple negative breast cancer (TNBC), TRA2A not only facilitates TNBC cell proliferation, invasion, migration and survival, but also promotes paclitaxel resistance by regulating the alternative splicing process of RSRC2 from RSRC2s to RSRC2l [17]. Finally, host TRA2A also inhibits viral mRNA splicing by binding to the intronic splicing silencer motif in the M mRNA of representative avian YS/H5N1 or in the NS mRNA of representative human PR8/H1N1 virus [18].

However, the role of TRA2A in esophageal cancer progression and the molecular regulation mechanisms have not been addressed to date. In this study, we found TRA2A binds and regulates an oncogenic lncRNA MALAT1 (Metastasis associated lung adenocarcinoma transcript 1). Genomics analysis indicates an association between TRA2A expression and disease-free survival and overall survival time in cancer patients. Functional studies also confirmed that the interaction between MALAT1 and TRA2A plays an important role in esophageal cancer cells.

Overexpression TRA2A vector EX-I0007-M14-3×Flag-TRA2A was purchased from GeneCopoeia company (Guangzhou, China). TRA2A siRNAs oligonucleotides were designed and synthesized by GenePharma (Suzhou, China). The siRNA sequences are listed in Supplementary Materials Table S1. The transfections of vectors and siRNAs were performed using Lipofectamine 3000 (Invitrogen, USA). All experiments were conducted according to the manufacturer's recommendations.

Cell Counting Kit-8 assay was used to detect cell proliferation. In total of 100 μl and 2 ×103 cells were seeded into 96-well plates. Then, 10 μl of CCK-8 solution (Beyotime, Shanghai, China) was added to each well on days 1, 2, 3, 4 and 5. After 2 h of incubation in the cell incubator, the absorbance at 450 nM was measured. For colony formation assay, 400 cells were plated in 6-well plates and incubated at 37°C in a 5% CO2 for about two weeks until the colonies are visible. The colonies were fixed with methanol solution for 15 minutes, stained with 0.1% crystal violet for 30 minutes, and counted after cleaning. For the transwell migration assay, 1×104 cells were seeded in the upper transwell chamber (8 μm pore size, Corning, NY, USA) in a volume of 200 μl medium without FBS, while 600μl medium with 10% FBS was added to the 24-well plate with transwell chamber. After 48h culture in the incubator, the cells in the upper transwell chamber were gently wiped off, and the cells attached to the outside of the filter were fixed with methanol and stained with 0.1% crystal violet. For would healing assay, the monolayer was scratched using a sterile 200 μl pipette tip after serum starvation for 12h when the cell confluence was close to 100%. Then the cells were cultured in complete medium after detached cells were removed. Photos were taken at 0, 12 and 24h. Wound closure rate was calculated as follows: wound closure rate (%) = (initial wound distance - final wound distance)/initial wound distance ×100.

The MALAT1 sequence (NR_002819.3) was divided into four fragments (F1 nts 1-2340; F2 nts 2341-4500; F3 nts 4501-6301; F4 nts 6302-8751) and cloned into the pEASY-blunt vector with the T7 promoter. Each fragment is ~2000bp, avoiding the predicted protein binding domains. The primers to construct MALAT1 are listed in Supplementary Materials Table S3. After linearization of plasmids, T7 RNA polymerase and biotin-labeled mixture were used to transcribe RNA in vitro. The labeled RNA was bound to magnetic beads and then incubated with cell lysates to get RNA&Protein complex. After eluting the RNA&Protein complex, proteins associated with biotin-labeled RNAs were immunoprecipitated with streptavidin magnetic beads, and subjected to perform iTRAQ (isobaric tags for relative and absolute quantitation) experiment using AB SCIEX TripleTOF® 6600 System and related AB SCIEX ProteinPilot™ 4.5 software.

Cells were placed on ice for 30 min in a RIPA lysis buffer and PMSF (Solarbio, Beijing, China). After protein extraction, 30 μg protein per sample was loaded to 10% SDS-polyacrylamide gel electrophoresis (SDS-PAGE) and transferred to polyvinylidene fluoride membranes (Immobilon P, Millipore, Billerica, USA). After blocking with 5% non-fat milk, the membranes were incubated with primary antibody at 4°C overnight, followed by incubation with secondary antibodies at room temperature for 1 h. The antibodies including GAPDH (#2118, 1:1000), EZH2 (#5246, 1:1000) and β-catenin (#8480, 1:1000) were purchased from Cell Signaling Technology (USA) and TRA2A (ab72625, 1:1000) was bought from Abcam.

Data were collected and expressed as the mean ± standard error of the mean (S.E.M.) and were analysed using SPSS 19.0 (IBM, Armonk, NY, USA) with differences between two groups assessed by independent T test. Statistical probability of P < 0.05 was considered significant. Graphs were generated with GraphPad Prism 7.0.

Currently there are few reports on TRA2A expression characteristics in human cancer cells. So we first evaluated the mRNA expression profiles of TRA2A based on Cancer Cell Line Encyclopedia (CCLE) (https://portals.broadinstitute.org/ccle). TRA2A is shown to express at stable level in a variety of cancer cell lines (Supplementary Materials Figure S1A). It is also expressed in all 27 measured esophageal cancer cell lines (Supplementary Materials Figure S1B). We further downloaded and analyzed 194 esophageal samples from The Cancer Genome Atlas (TCGA) (https://www.cancer.gov/about-nci/organization/ccg/research/structural-genomics/tcga), of which 10 are normal, 95 are ESCC and 89 are EAC. Approximately 12% of tumor samples were shown different type of genetic alteration including amplification (12 cases), deep deletion (1 case), and mRNA upregulation (12 cases) (Figure 1A). Patients with TRA2A alteration are significantly correlated with shorter disease-free survival (P =0.006) and overall survival time (P =0.016) (Figure 1B), indicating the clinical relevance of TRA2A genetic alterations.

Previously, we have developed a computational pipeline to find the interactions among RNA binding protein, lncRNA and miRNA [19]. Our predictions indicated that TRA2A binds with lncRNA MALAT1 in esophageal cells. ENCODE eCLIP data (https://www.encodeproject.org/) also showed that MALAT1 is one of the 108 overlapped RNAs binding with TRA2A in both HepG2 and K562 cells (Supplementary Materials Figure S2A). 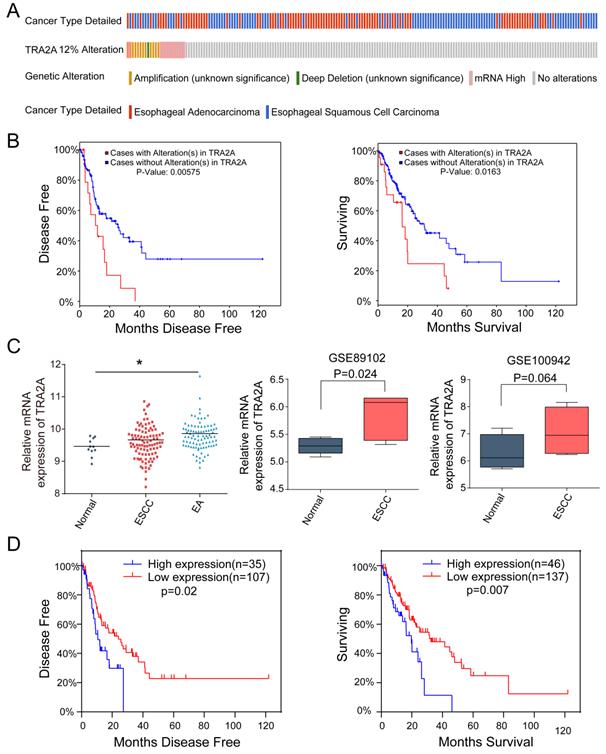 Besides, RT-qPCR analysis after RNA immunoprecipitation assays in TE1 cells using flag antibody confirmed an enrichment of MALAT1, compared with IgG control (Figure 4D). We used RBPmap (http://rbpmap.technion.ac.il/) to predict the potential binding sites of TRA2A on MALAT1 (Supplementary Materials Table S4). Next, the whole sequence of MALAT1 was divided into four fragments and transcribed in vitro. Then the proteins associated with biotin-labeled RNAs were pull down and subjected to mass spectrometric analysis (Figure 4E). The results showed that TRA2A binds to the fragment 2 of MALAT1 (Supplementary Materials File 1), consistent with the predicted results of RBPmap. Taken together, these results suggested that TRA2A can directly bind with MALAT1, and regulate the lncRNA expression in esophageal cancer cells.

MALAT1 is known to promote esophageal cancer progression [20, 21]. In particular, MALAT1 can activate EZH2 pathway in aggressive renal cell carcinoma, colorectal cancers and osteosarcoma [22-24]. Thus we postulated that TRA2A regulates and activates the EZH2/β-catenin pathway by binding to MALAT1 and elevating its expression, hence promotes esophageal cancer progression. To address this hypothesis, we performed RT-qPCR after inhibition of TRA2A with siRNAs, which revealed that TRA2A reduces EZH2 and CTNNB1 (β-catenin) in both TE1 and OE19 (Figure 5A). In addition, proteins expressions of TRA2A, EZH2 and CTNNB1 (β-catenin) were tested after TRA2A knockdown. As shown in Figure 5B, expression of EZH2, CTNNB1 (β-catenin), were significantly decreased in TE1 after depletion of TRA2A by small interfering RNAs. Similar results were also observed in another esophageal cancer cell OE19 (Figure 5B). Together, these data suggested that binding of TRA2A to MALAT1 activates EZH2/β-catenin pathway. 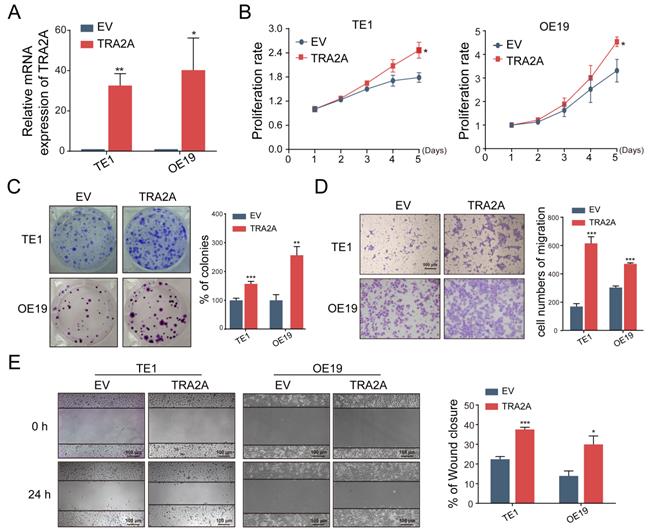 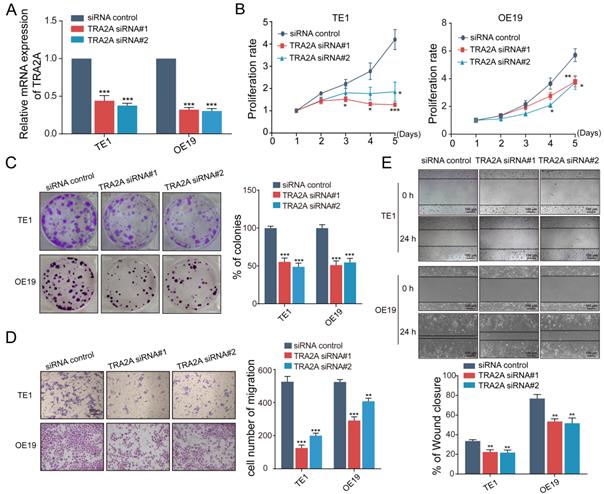 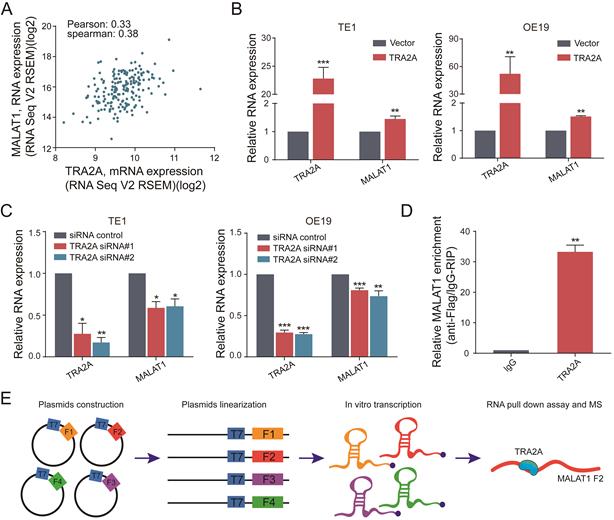 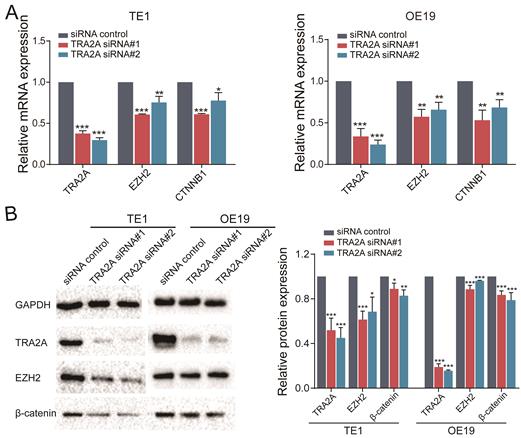 Here, we have shown that TRA2A was directly bound to MALAT1 via RIP assay. Using a complementary RNA pull down experiments, we confirmed that TRA2A binds to the 2341-4500 bp fragment of MALAT1. Furthermore, TRA2A influences the expression of MALAT1. We speculated that TRA2A interaction with MALAT1 may enhance the lncRNA stability in EC. Indeed, another lncRNA, LINC00662, was recently reported to bind with TRA2A. This interaction increases LINC00662 stability, thereby to regulate blood-brain barrier permeability in the Alzheimer's microenvironment [28]. In addition, we have demonstrated that the binding of TRA2A to MALAT1 controls the EZH2/β-catenin pathway in siRNA depletion assay. Recently, the regulatory role of TRA2A in ncRNA m6A modification has been suggested [29]. Thus TRA2A may selectively promote the methylations of the m6A sites co-localized with its binding sites on MALAT1 through physical interactions with the m6A writers. This methylation will lead to MALAT1 structure change, which further facilitates PRC2/EZH2 histone methylase complex formation. But the specific regulation mechanism needs more studies. Functionally, we demonstrated that TRA2A is associated with proliferation and migration of esophageal cancer. We also studied the expression characteristics of TRA2A among esophageal cancer patients. TRA2A was up-regulated in esophageal cancer compared to normal tissues, and patients with high TRA2A expression had shorter disease-free survival and overall survival time.

In summary, this study demonstrates an important regulatory role of TRA2A-MALAT1 interaction in esophageal cancer cells. In addition to its canonical function as a mRNA splicing factor, TRA2A directly binds to lncRNA as an RNA-binding protein and participates in cancer signaling transduction, therefore providing new insights into mechanism and treatment.

This work has been supported in part by the National Natural Science Foundation of China (No. 81673037).