Results: During the median follow-up period of 72 months, LR as the first failure occurred in 29 patients, including 24 patients with isolated LR. The 5-year cumulative incidence rate of LR was 3.2% among all patients. In the luminal A subtype, a BMI of <18.5 kg/m2 was an independent risk factor for LR, as determined by a competing-risk regression model (relative risk, 3.33; p = 0.041). Severely obese patients (BMI >30 kg/m2) with the triple negative subtype had an increased risk of LR (relative risk, 3.81; p = 0.048).

The steadily increasing prevalence of obesity is an important global health issue. The World Health Organization defines overweight and obesity as abnormal or excessive fat accumulation that presents a risk to health, and has referred to obesity as a disease since 1997 [1]. Recently, the American Medical Association also officially declared obesity as a chronic disease. This reflects the severity of obesity with regard to its consequences and associated socioeconomic burden.

The degree of obesity is usually expressed using body mass index (BMI), which is calculated as weight in kilograms divided by the square of height in meters. High BMI is an established major risk factor for various chronic diseases, such as hypertension, diabetes mellitus, and other metabolic syndromes. Along with these comorbidities, accumulating evidence describes the increased development of several types of malignancy in patient cohorts with a higher BMI [2-4]. For example, a 1 unit increase in BMI increases the risk of breast cancer incidence by 1.07 times in postmenopausal Korean women [3].

BMI affects many aspects of breast cancer, including cancer occurrence, the determination of intrinsic subtypes, and prognosis [3-10]. With regard to prognosis, three meta-analyses have demonstrated the association of high BMI with poor prognosis of breast cancer [7-9]. However, there have been limited studies addressing the association of BMI with local recurrence (LR) and the results were inconsistent among these studies [11-16].

In addition to being overweight and/or obese, several researchers showed an increased risk of LR and mortality from breast cancer in patients who are underweight [11, 13, 19]. However, owing to its rare incidence, the effects of being underweight have not received as much interest as those of obesity. As increased mortality from cancer in underweight patients has been observed mostly in East Asian populations [13, 19, 20], clinicians from these countries should investigate the role of being underweight as an important prognostic factor for cancer treatment.

As even isolated LR can increase breast cancer-specific mortality [21, 22], identifying high-risk groups for LR is important for decreasing the risk of death from cancer. The present study aimed to examine the association between BMI and LR according to each intrinsic subtype in Korean patients with breast cancer who received curative treatments based on the contemporary guidelines.

The Institutional Review Board of Ajou University School of Medicine approved this retrospective study with an exemption of informed consent. All patients with pathologically stage T1-2 and N0-1 who underwent curative surgery between 2007 and 2012 were included in the present study (n = 1,016). Patients who received preoperative treatments (n = 81), who had a history of malignancies (except papillary thyroid cancer) (n = 14), who presented with bilateral invasive breast cancer (n = 7), and who were lost to follow-up without any examinations for their treatment response (n = 7) were excluded.

With the exception of 8 patients, all patients received adjuvant treatments. Of these, systemic treatments were administered in 878 patients: adjuvant chemotherapy alone in 196 patients, adjuvant hormone therapy alone in 234 patients, and both treatments in 448 patients. Patients with node-positive breast cancer received a taxane-based regimen. Patients with node-negative breast cancer received either 6 cycles of cyclophosphamide, methotrexate, and fluorouracil or 4-6 cycles of anthracycline and cyclophosphamide with or without fluorouracil. The chemotherapy dose was not reduced owing to BMI. Adjuvant trastuzumab was administered in 64 out of 135 patients who were human epidermal growth factor receptor 2 (HER2)-positive because of the approval of its adjuvant use by Korean National Health Insurance subsequent to the year 2007, or patient economic problems.

Radiotherapy was delivered in 701 patients. Twenty two patients did not receive radiotherapy after breast conserving surgery because of old age (n = 11) or their preference (n = 11). Although our institutional policy was to recommend against postmastectomy radiotherapy in N1 disease at the time of study, 2 patients received postmastectomy radiotherapy at their preference. The whole breast was irradiated conventionally with a total dose of 45-50.4 Gy and the tumor bed was boosted with 10-14 Gy. Thirty-two patients with multiple positive lymph nodes received supraclavicular irradiation with a total dose of 45 Gy.

Patients were approximated into 4 intrinsic subtypes based on the receptor status, detected by immunohistochemical staining as follows: luminal A (estrogen receptor [ER] or progesterone receptor [PR] positive, and HER2 negative), luminal B (ER or PR positive, and HER2 positive or Ki-67 index ≥14%), HER2-enriched (ER and PR negative, HER2 positive) and triple negative (ER, PR, and HER2 negative). Tumors were considered HER2 positive only if they were scored 3+ by immunohistochemistry or scored 2+ with HER2 gene amplified by fluorescence or silver in situ hybridization.

Descriptive statistics were analyzed to compare the categorical variables of clinical, disease and treatment-related factors among intrinsic subtypes and by BMI using chi-squared or Fisher's exact tests. Continuous variables including age and BMI were compared using the Mann-Whitney U test. Follow-up was determined from the date of initial surgery. LR was defined as the first tumor recurrence in the ipsilateral breast or chest wall, with or without any other recurrences. All suspicious LRs on imaging work-ups were confirmed using needle or excisional biopsy. The LR rate was estimated using cumulative incidence analysis as described by Gray [24], and the competing risks were regional recurrence at axillary, internal mammary and/or supraclavicular lymph nodes area, distant metastasis, contralateral breast cancer, or death from any causes. A competing risk regression model was used to identify risk factors for LR, and variables with a p value <0.20 in the univariate regression model were incorporated into the multivariate analysis. BMI was included in the regression model after dichotomization according to the reference value of Asian criteria [23]. Statistical analyses were performed using R software version 3.2.5 (https://cran.r-project.org/).

The median follow-up period was 72 months (range 6-118 months) for all patients. A total of 82 patients experienced treatment failure. LR with or without other recurrence as the first failure occurred in 29 patients, including 24 patients with isolated LR. Fifty-three patients experienced regional recurrence (n = 21), distant metastasis (n = 32), and/or contralateral breast cancer (n = 9) as the first failure.

Patient characteristics according to 4 intrinsic subtypes

Plots of the 5-year cumulative incidence of local recurrence. (A) all patients, (B) among each BMI range and (C) among each approximated intrinsic subtype of breast cancer. 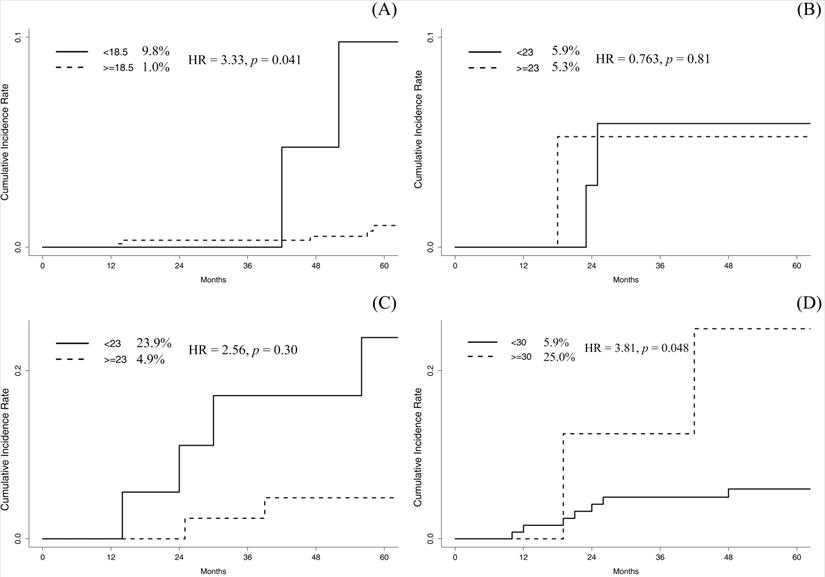 The association between high BMI and an increased risk of LR has been inconsistent among certain studies [11-16]. In general, large scale studies reported that BMI had no influence on LR [12, 14], while single institutional studies reported that BMI was significantly associated with LR [11, 15, 16]. Patients from large-scale studies were included for a long period, and thereby consisted of a heterogeneous group receiving different diagnostic and therapeutic modalities [12, 14]. Although single institutional studies had limited numbers of patients, patients consisted of homogeneous populations and received reasonably uniform treatments during the relatively short study period [11, 15, 16].

In contrast to the prevailing view that a higher BMI is significantly associated with LR, several studies have shown that lower BMI may increase the risk of LR. Marret et al. reported that a 1 unit elevation of BMI reduced the risk of LR approximately by 8% [11]. Moon et al. also reported that being underweight was an independent prognostic factor for LR in 24,698 Korean women with invasive breast cancer [13]. Although the association between BMI and hormone receptor status was not documented in the study by Moon et al., the present study further demonstrated that the detrimental effect of being underweight on LR was observed in the luminal A subtype. Kawai et al. also reported that being underweight significantly increased the risk of mortality from breast cancer in Japanese patients who were hormone receptor-positive [10].

The reason for the increased incidence of LR in patients who are underweight has not been comprehensively elucidated. Marret et al. speculated that large breast size in obese patients might be responsible for the delayed detection of LR [11]. These authors also raised the possibility of a suboptimal resection margin, although this information was not available for their study. In addition, Moon et al. suggested that the poor prognosis of patients who were underweight might be attributable to a younger median age or possible malnutrition [13].

The present study had several limitations, including inherent biases due to the retrospective design. The number of patients in the present study was small, particularly considering modest effect size of BMI on the prognosis of patients with breast cancer. Adjuvant trastuzumab was not administered to all HER2-positive patients and the effect of BMI on HER2-positive patients could not be assessed accurately. The definition of obesity by BMI and the classification of intrinsic subtypes through immunohistochemical results were approximated. Because a substantial number of patients had no record of serial weights, the influence of weight change was not evaluated. Finally, the results of the present study cannot be applied equally to other populations as we included only Korean patients.

In conclusion, the present study demonstrated a distinct relationship between BMI and the risk of LR in Korean patients with breast cancer, which may be different compared with European or North American populations. Patients who were underweight in the luminal A subtype and those who were obese in the triple negative subtype which have not been typically recognized as a risk group, were highly susceptible to LR after contemporary treatments with a curative aim in Korean patients with breast cancer. Therefore, the prognostic effects of BMI on breast cancer should be investigated with a multimodal approach based on genetic diversity across ethnic groups. In addition, tailored treatment guidelines for breast cancer, considering the BMI, age, and genetic background should be discussed.

1. Organization WH. Obesity: preventing and managing the global epidemic. Report of a WHO consultation. WHO technical report series. 2000;894:253

23. Organization WH. The Asia-Pacific perspective: redefining obesity and its treatment. 2000.

24. Gray RJ. A class of K-sample tests for comparing the cumulative incidence of a competing risk. The Annals of statistics. 1988:1141-54