Biopsy of distant metastasis is not a significant prognostic factor for synchronous metastatic nasopharyngeal carcinoma: a propensity score-matched analysis from the Surveillance Epidemiology and End-Results Registry

Nasopharyngeal carcinoma (NPC) is prevalent in southeast Asia and northern Africa, with an age-standardized rate of 3.0 per 100,000 in China to 0.4 per 100,000 in population that are mainly white [1, 2]. There are about 5% NPC patients develop distant metastasis at diagnosis, which is also called synchronous metastatic NPC [3], and 20~30% patient suffer from metastasis after standard chemoradiotherapy [4-7]. Unfortunately, median overall survival (OS) time of patients with distant metastasis is as short as 10-20 months [8-10]. Distant metastasis accounts for about 70% of treatment failures in NPC.

Conventionally, the diagnosis of metastasis counts on non-invasive modalities like magnetic resonance imaging (MRI), computed tomography (CT) and [18F] fluorodeoxyglucose positron emission tomography and CT (PET-CT) [11]. Although the precision of diagnosis of distant metastasis is high using non-invasive patients, there are still patients with ambiguous distant metastasis who might receive biopsy of suspected metastatic sites. The application of novel targeted therapies like immune checkpoint inhibitors (ICIs) for metastatic NPC patients mainly depends on the expression of immune checkpoint molecules in primary tumor [12]. With the advent of precision medicine, whether the molecular characteristics of primary tumor can represent that of metastatic lesions and provide enough guidance of targeted therapies concerns many clinicians. It has been reported that genetic characteristics of distant metastasis were distinctly different from that of primary tumors, based on results of high-throughput sequencing on paired primary and distant metastatic tumors [13-15]. Peter J. Campbell et al. found that most distant metastases acquired driver mutations not seen in the primary breast tumor [15]. To settle the problem whether microenvironment is distinctly different between primary tumor and distant metastasis, biopsy of metastatic sites is needed.

Concerns about promotion of cell dissemination impeded the application of biopsy of neck and metastatic sites in NPC patients [16, 17]. Previous studies have shown that cervical lymph node biopsy was not associated with impaired survival in NPC [18, 19]. And Fine-needle aspiration biopsy of the neck has been clearly recommended in work up of NPC in National Comprehensive Cancer Network (NCCN) guidelines in 2015 [20]. However, there is no information concerning the relationship between survival and biopsy of distant metastasis. In this study, we aimed to evaluate the association between biopsy of distant metastasis and survival based on a retrospective population-based study carried on data from the Surveillance, Epidemiology, and End Results Program (SEER).

We identified 7,283 incident NPC cases from 2004 to 2016. Tumor site and histology were coded according to criteria specified by the World Health Organization (WHO) in International Classification of Diseases for Oncology (ICD-O-3) [22]. For patients diagnosed between 2004 and 2015, TNM stage was identified using the American Joint Committee on Cancer (AJCC) 6th stage. For patients diagnosed in 2016, SEER combined summary stage was used. All stages were converted to the AJCC 7th stage. In our study, synchronous metastatic NPC patients were included. The status of biopsy of distant metastasis were identified using “CS Mets Eval (2004-2015)” and “Derived SEER Combined M src (2016+)” variables, patients without complete information of biopsy were excluded (Figure 1). A total of 743 synchronous metastatic NPC patients were analyzed in this study.

To control for confounding factors and minimize bias, two cohorts were generated via propensity score matching (PSM) [23]. Patients with missing value were removed before PSM analysis. Adjusted for age, gender, race, histological type, year of diagnosis, tumor stage (T stage), node stage (N stage), chemotherapy, radiotherapy, status of biopsy of nasopharynx and status of biopsy of neck, a well-balanced cohort by matching each patient who underwent biopsy of distant metastasis with one patient who did not receive biopsy of distant metastasis was created (Figure 1).

Histological types of the tumors were grouped according to the WHO classification scheme using the ICD-O-3 codes. The keratinizing squamous cell carcinoma (KSCC) group consists of squamous cell carcinoma (ICD-O codes 8070 and 8071). The differentiated non-keratinizing carcinoma group (DNKC) consists of large- and small-cell non-keratinizing carcinoma (ICD-O codes 8072 and 8073). And the undifferentiated non-keratinizing carcinoma group (UNKC) consists of undifferentiated carcinoma, lymphoepithelial carcinoma and basaloid squamous cell carcinoma (ICD-O codes 8020, 8082, and 8083). Patients with histological type other than previously mentioned were classified as the other group. Race was coded as American Indian/Alaska Native/black, Asian or Pacific Islander and white people. The status of biopsy of nasopharynx was identified under variables “CS Tumor Size-Ext Eval (2004-2015)” and “Derived SEER Combined T src-2016+”. And the status of biopsy of neck was identified using “CS Reg Node Eval (2004-2015)” and “Derived SEER Combined N src (2016+)” variables.

Comparisons of demographic, clinical and pathologic variables between patients with various categories were carried out using Chi-square statistic for nominal variables and Student's t-test for continuous variables. Survival curves were constructed using the Kaplan-Meier method and compared with the log-rank test. Univariate and Multivariate Cox regression analyses were used to determine factors significantly associated with survival and to calculate hazard ratios (HRs) and 95% confidence interval (CI). Missing value were removed in the univariate and multivariate analyses. All statistical analyses were conducted using R version 3.5.0. Statistical significance was assumed for a two-tailed P value <0.05.

Flow chart of our study. 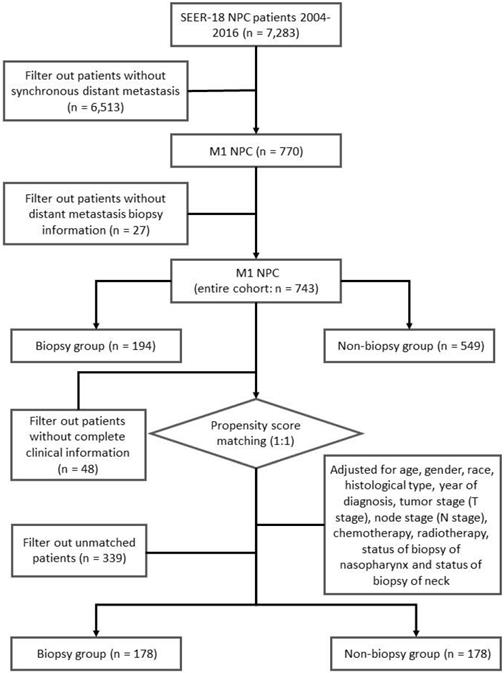 Impact of biopsy of distant metastasis on survival outcomes 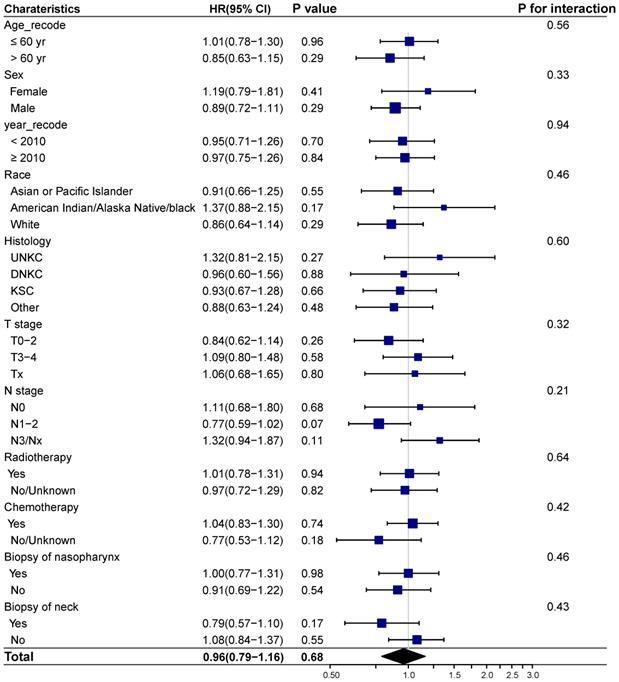 Biopsy is generally applied to obtain suspected tissues for histopathological diagnosis of cancer or other disease. With concern of the risk of tumor dissemination and discomfort that biopsy might bring about [4, 16, 24], scientists strived to establish the noninvasive methods for diagnosis like circulating tumor DNA [25, 26]. However, biopsy of primary tumor remains cornerstone in most cancers. In breast cancer, the biopsy of clinically suspicious metastatic lesions could confirm diagnosis of metastases. Clemons, M. J. et.al also found that biopsy was well tolerated, and most patient reported reassurance at having tissue confirmation of metastatic disease [27]. For some patients, it's hard to confirm distant metastasis merely depended on image data, and diagnostic therapies might be applied. Our study indicated that biopsy of distant metastasis was not associated with impaired OS and CSS in NPC, and might become another choice for those with suspected metastases. 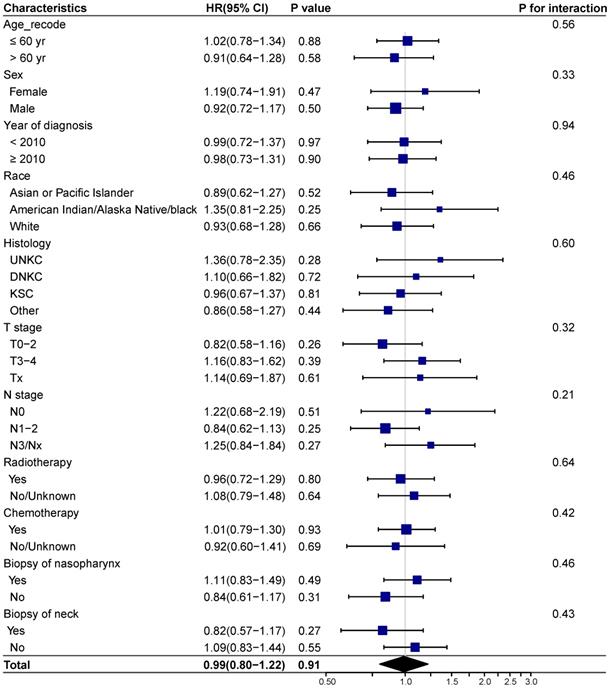 Our study has several limitations. Firstly, it is a retrospective study based on SEER database, some information like treatment information might be inaccurate. We excluded patients with incomplete information and conducted the subgroup analysis using OS and CSS as the survival outcomes to ensure the stability of our results. Secondly, it's reported that modality of biopsy and interval of receiving treatment after biopsy were associated with poor survival in NPC, but this information was not provided by the SEER program, and further research should take these factors into consideration. Thirdly, the compliance for biopsy of distant metastasis should be further explored in future studies. Finally, our findings need to be validated in a multi-institutional prospective study in the future.

Funding was provided by the National Natural Science Foundation of China (No. 81772895 and 81874134), the Program of Sun Yat-Sen University for Clinical Research 5010 Program (No.2013010, 2018015 and 2018029), the Key-Area Research and Development of Guangdong Province (No. 2020B1111190001), Guangdong Province Science and Technology Development Special Funds (Frontier and Key Technology Innovation Direction - Major Science and Technology Project) (No. 2017B020226004), the Major Project of Sun Yat-Sen University for the New Cross Subject, the Special Support Program for High-level Talents in Sun Yat-Sen University Cancer Center (to M.Y. Chen).

MYC, YJH, ML and QY conceived the idea and designed the study. ML collected the data. ML and CYD analyzed the data. ML, QY, RY and XZ designed illustrations and figures. ML wrote the manuscript, with all authors contributing to writing and providing feedback.

16. Riggins RS, Ketcham AS. EFFECT OF INCISIONAL BIOPSY ON THE DEVELOPMENT OF EXPERIMENTAL TUMOR METASTASES. The Journal of surgical research. 1965;5:200-6

23. Austin PC. Statistical criteria for selecting the optimal number of untreated subjects matched to each treated subject when using many-to-one matching on the propensity score. American journal of epidemiology. 2010;172:1092-7