Conclusions: Our study reveals the heterogeneity in PI3K-AKT-mTOR pathway among the breast cancer molecular subtypes in our cohort. Moreover, the number and specific sites of PIK3CA mutations have distinct prognostic impact.

The PI3K-AKT-mTOR pathway is among the most common activation signals in various cancer types [1-3]. This pathway is involved in the regulation of cell proliferation, apoptosis, metabolism, migration, and invasion [4, 5]. The activation of this pathway begins with the binding of the ligand to the corresponding receptor tyrosine kinase, phosphoinositide 3-kinase (PI3K). The regulatory subunit of PI3K becomes phosphorylated and leads to the activation of p110, its catalytic subunit. The activated PI3K produces phosphatidylinositol 3, 4, 5-triphosphate (PIP3), a lipid second messenger, and leads to further activation of downstream effectors such as protein kinase B (AKT) and mammalian target of rapamycin (mTOR) [4]. On the other hand, phosphatase and tensin homolog (PTEN) counteracts the function of PI3K by dephosphorylating PIP3 and is regarded as the major natural inhibitor of the PI3K-AKT-mTOR pathway [4].

Women diagnosed with breast cancer (American Joint Committee on Cancer (AJCC) Tumor, Node, Metastasis (TNM) stage IA to III) at the Department of Breast Cancer in Guangdong Provincial People's Hospital who had tissue samples submitted for NGS were included in this study. Breast tumor tissues were obtained by surgical resection and processed as formalin-fixed paraffin-embedded (FFPE) blocks. Expression status for estrogen receptor (ER), progesterone receptor (PR), and human epidermal growth factor receptor 2 (HER2) were examined according to the guidelines of the American Society of Clinical Oncology (ASCO) /College of American Pathologists (CAP) [15]. All tumor samples were reviewed by breast pathologists, and clinical data were obtained from medical records. This study was approved by the institutional review board of the Guangdong Provincial People's Hospital. Written informed consent were provided by all patients.

Sequence data were mapped to the human genome (hg19) using Burrows-Wheeler Aligner v.0.7.10. Local alignment optimization, variant calling, and annotation were performed using GATK v.3.2 and VarScan v.2.4.3. Variants were filtered using the VarScan fpfilter pipeline, with loci with depth less than 100 filtered out. At least 5 supporting reads were required for insertion-deletion variants; while 8 supporting reads were required for SNVs to be called. According to the ExAC, 1000 Genomes, dbSNP, and ESP6500SI-V2 databases, variants with population frequency over 0.1% were grouped as single nucleotide polymorphisms and excluded from further analysis. The remaining variants were annotated with ANNOVAR and SnpEff v.3.6. DNA translocation analysis was performed using Factera v.1.4.3. Copy number variation was detected using in-house bioinformatics pipeline based on the depth of coverage data of capture intervals.

Descriptive statistics were used to summarize patient features and sequencing results, including median and range for categorical variables, mean, and standard deviation for continuous variables. Chi-square test or Fisher's exact test was used to compare the differences in demographic, clinical, and pathological characteristics in different groups. All statistical tests were two-way. P value of less than 0.05 was considered significant.

Kaplan-Meier analysis with log-rank test was performed to analyze OS data obtained from the Molecular Taxonomy of Breast Cancer International Consortium (METABRIC) [17]. OS was defined from the date of initial diagnosis until death. A total of 2,388 breast cancer patients with TNM stage I-III from the METABRIC dataset were included in the survival analysis, including TNM stage I (n = 214), stage II (n = 976), and stage III (n = 1198). P-values were adjusted with clinical data including age, tumor stage, histological subtype, menopausal status, therapy received (radiotherapy, hormone therapy, or chemotherapy).

Mutation profile of genes in the PI3K-AKT-mTOR pathway of 589 Chinese patients with breast cancer. Tumor samples were grouped according to molecular subtype: HR+/HER2- (n = 321), HR+/HER2+ (n = 111), HER2-rich (n = 64), and TNBC (n = 68) as indicated by the annotation at the bottom. The mutation frequency for each gene is shown on the left. Colors indicate the mutation types. 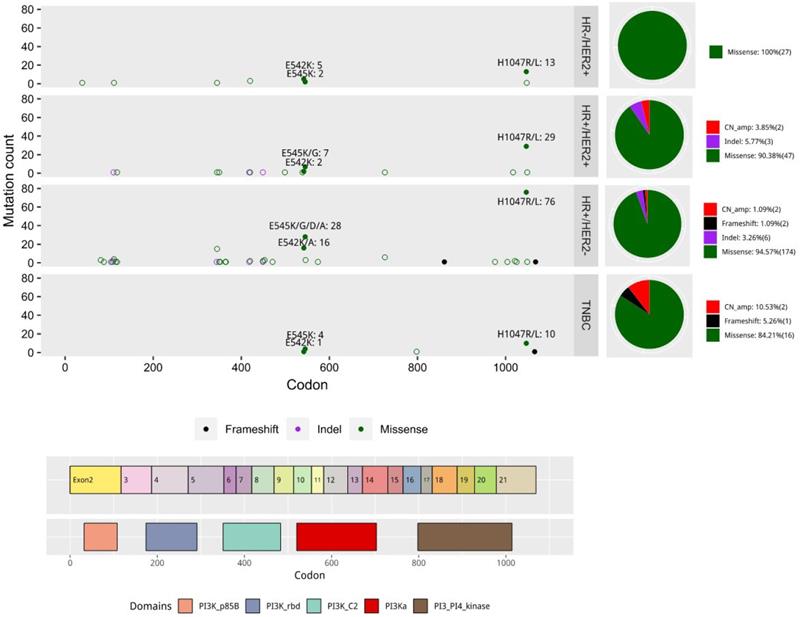 Clinicopathological features of patients according to PIK3CA mutations.

As shown in Table 1, PIK3CA mutations were more likely to be detected in patients over 40 years old (P = 0.002), those who are postmenopausal (P = 0.004), and had ER-positive (P = 0.002), and PR-positive (P = 0.012) types of breast cancer. Interestingly, the proportion of patients with PIK3CA mutations having Ki67 scores of >14% was significantly lower than that of PIK3CA wild-type (WT) patients. However, there were no significant differences between PIK3CA-mutant and WT patients in terms of HER2 status, tumor size, and lymph node metastasis (Table 1).

Clinicopathological features of patients according to PTEN mutations.

Clinicopathological features of patients according to AKT1 mutations.

In this study, we performed a comprehensive analysis of the genetic aberrations associated with the PI3K-AKT-mTOR pathway in a large cohort of Chinese women with early-stage breast cancer (n = 589). Based on our results, PIK3CA was the most frequently mutated gene (45.0%), which is consistent with a similarly high frequency (43.6%) reported by Chen et al. [9], but numerically higher than the data from the Cancer Genome Atlas (TCGA) breast cancer dataset (36%) [20]. Similar to previous reports [9, 20], the PIK3CA hotspot mutations observed in our cohort were also H1047R, E545K, and E542K mutations. Among them, the H1047R substitution in exon 20 accounted for 41.9% (126/301), the E545K substitution in exon 9 accounted for 13.0% (39/301), and the E542K substitution in exon 9 accounted for 7.6% (23/301) of all the PIK3CA mutations. Since H1047 is in the kinase domain and near the C-terminus of the activation loop, the substitution of histidine (H) to arginine (R) at this position may alter the conformation of the activation loop and result in the activation of the PI3K pathway [21, 22]. H1047R mutation is sufficient to induce tumors in animal models and may be associated with a favorable response to PI3K inhibitors [21, 22]. On the other hand, E545 is within the helical domain and interacts with the N-terminal SH2 domain of the p85 regulatory subunit [23]. The change from glutamic acid (E) to lysine (K) causes charge reversal and disrupts its inhibitory interaction with p85 [24]. In addition to the three common and typical “major-mutant” hotspots (E542K, E545K, or H1047R), we also identified some “minor-mutant” sites, including N345K, H1047L, E726K, and C420R. Consistent with our findings, Martínez-Sáez et al. previously reported a PIK3CA mutation rate of 35.7% in their breast cancer cohort, with H1047R (35%), E545K (17%), E542K (11%), N345K (6%), and H1047L (4%) as the most common mutation sites [25]. H1047L and N345K mutations are located in the kinase domain with relatively higher mutation frequency, and N345K and C420R mutations are located in the PIK3CA C2 domain, which are relatively rare. 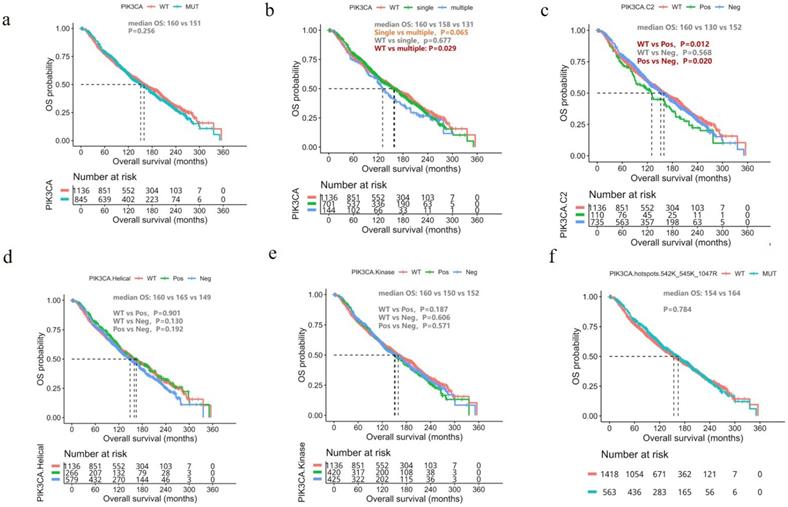 In the PI3K-AKT-mTOR pathway, our study identified PTEN as the second most commonly mutated gene. PTEN mutations occurred in 7.5% (44/589) of patients, and the incidence rate of double-PTEN mutations was 9.09% (4/44). Millis et al. reported a PTEN mutation rate of 6% across 19,784 diverse solid tumors [1], while the PTEN mutation rate was about 10% in the TCGA cohort [20]. However, the incidence of negative PTEN expression using immunohistochemistry of breast tumors was reported to be as high as 30% [1], which suggests that somatic mutations in PTEN are only a small proportion of breast tumors with PTEN loss-of-function. In our cohort, we observed a difference in the subtype distribution of PTEN and PIK3CA mutations. PTEN mutations occurred most frequently in HR+/HER2- subtype, and second most in TNBC subtype. In addition, for PTEN mutations also lack typical hotspot mutations. Since PTEN is a tumor suppresser gene, any loss-of-function mutation would inactivate it in tumors. However, in the case of PIK3CA, only a few gain-of-function mutations would be selected during tumorigenesis. Another interesting observation in our cohort is that breast cancers with PTEN mutations were more likely to be HER2-negative, while no significant differences between patients with/without PTEN mutations in terms of age, ER status, PR status, tumor size, lymph node metastasis, and Ki67 score.

AKT1 (5.9%) ranks as the third most commonly mutated gene in the PI3K-AKT-mTOR signaling pathway in our cohort. Almost all (94.3%, 33/35) of AKT1 mutations were identified in HR+/HER2- breast tumors, with only one typical hotspot mutation. AKT1 E17K is a single amino acid mutation in the pleckstrin homology (PH) domain of the AKT1 protein, which has been reported to function as a carcinogenic driver mutation in breast cancer and other solid cancers [18, 19]. In our cohort, breast cancers with AKT1 mutations were significantly associated with positive ER- (P = 0.016) and PR (P = 0.002) but negative HER2- (P = 0.001) status. However, women with/without AKT1 mutations were similar in terms of age, tumor size, lymph node metastasis, and Ki67 score.

There are some limitations in our study. First, since we do not have the long-term follow-up data for our cohort, correlation analysis for long-term survival outcomes and genetic data were only performed using publicly available METABRIC dataset. Second, as our current study did not include data on protein expression or other functional studies, the actual impact of the individual gene mutation on protein products and the activation status of the PI3K-AKT-mTOR signaling pathway largely rely on speculation. Third, most of the patients in our cohort did not receive inhibitors targeting the PI3K-AKT-mTOR signaling; hence, the therapeutic implication of the analyzed gene mutations was not evaluated.

In conclusion, our study demonstrated that the genetic alteration of the PI3K-AKT-mTOR pathway gene is very common in breast cancer, with a mutation rate of 62.6%. The frequencies and types of mutations in the PI3K-AKT-mTOR pathway genes were distinct across the breast cancer molecular subtypes. In addition, survival analysis using the data from the METABRIC cohort demonstrated the prognostic impact of different mutation sites and the number of mutations in PIK3CA. Nevertheless, the therapeutic value of the PI3K-AKT-mTOR pathway using various specific inhibitors warrants further exploration and deeper investigation of the genetic mutational landscape of the pathway.

We thank all patients and their families who participated in this study.

Data supporting the results of this study can be obtained from the corresponding author under reasonable request.

Ethics approval and consent to participate: All patients signed an informed consent form to participate in the study, and this study was approved by the Institutional Review Board of GDPH.