Objective: To investigate the preventing effect of P-cymene on high fat diet-related colorectal cancer and its mechanism.

Results: No tumors were formed in the high-fat diet group (G1) or the high-fat diet + P-cymone group (G3). 7 rats (70%) of the high-fat diet + DMH group (G2) developed 8 cancerous nodules, including 6 adenocarcinomas and 2 signet ring cell carcinomas; 4 rats (40%) in the high-fat diet + DMH + P-cymene group (G4) group formed 4 cancerous nodules, all of which were adenocarcinoma. There was no significant difference in the changes of glucose and lipid metabolism in each group. After the use of P-cymene, IL-1 decreased, IL-6 increased, and LEP decreased in the G4 group.The difference was statistically significant.The contents of Candida and Unclassified Bacteria in the G3 group rats were significantly lower than those in the G1 group.At the species level comparison, compared with the G2 group, the content of Clostridium XlVa in the intestinal tract of the G2 group rats was significantly increased compared to the G1 group.

Conclusion: In this study, it was found that p-cymenen can prevent the occurrence of colorectal cancer related to high-fat and high-calorie diet. The mechanism may be is reducing the expression of inflammatory factors such as IL-1 and LEP, increasing the expression of inflammatory factors of IL-6, and promoting the growth of probiotics such as bifidobacteria, isobacteria and clostridium IV in the intestinal tract.

High-fat diet (HFD) may cause patient chronic inflammatory and increase the risk of occurrence of colorectal cancer [1-2]. Chronic inflammatory states in the body may affect the gut micro-environment, which will lead to the high incidence of colorectal cancer [3-4]. In Traditional Chinese Medicine, HFD can cause “endogenous damp-heat syndrome” and may lead patients in a high risk of hyperlipidemia, obesity, diabetes, colorectal and breast cancer, and so on, which is called endogenous damp-heat syndrome related disease. Eupatorium, a Chinese medicine herb, has a long history of traditional use in China, which had pharmacological functions such as anti-inflammatory, anti-hyperlipidemic, anti-hypertensive, anti-virus, and anti-tumor activities,et al. [5]. Yang et al. [6] found that extract of Eupatorium can prevent A-549, BGC-823, SMMC-7721, and HL-60 tumour cell lines. Li et al. [7] found that the eatract of Eupatorium be endowed with pronounced anti-inflammatory property. P-cymene is an extract of Eupatorium, which is the most important active ingredient and has antioxidant and antitumoral activity potentials [8-9].

Acharya et al. [10] found that P-cymene can inhibited the viability and size of the HT-29 colonospheres in 3D colon cancer stem cells pheroids and do not enhance the expression of HES-1 gene, a crucial downstream gene in the Notch signalling pathway which is involved in the self-renewal and tumourigenicity in CRCs.

Feeding and grouping of experimental animals

The blood was removed by eyeballs, and the plasma was separated by centrifugation, and the blood glucose and blood lipid metabolism indicators (total cholesterol, triolein, HDL, LDL) were detected; inflammatory factors (IL-1, IL-6, COX-2) and cytokines (LEP) were detected by enzyme-linked immunosorbent assay (ELISA).

Fecal specimens and tissue specimens are retained and methods of gut microbes was detection by Metagenome as our previous reports [2].

A rat in the high-fat diet + DMH group (G2) died of the cachexia caused by extensive metastasis of abdominal tumor in 18th week. On week 20, the other 39 rats were sacrificed.

Comparison of tumor formation in each group 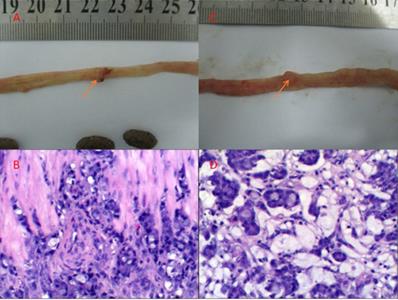 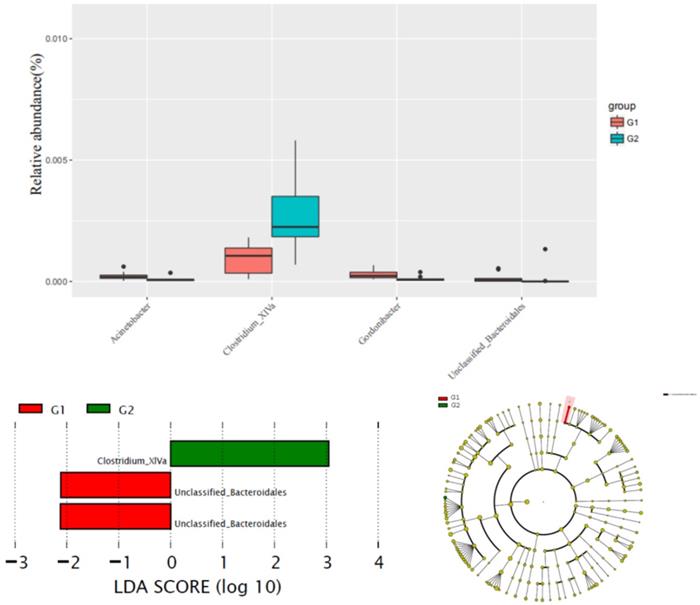 Changes in metabolism and inflammatory factors in each group

There was no statistically significant difference in serum lipid and blood glucose among four groups. Compared G1 and G3, G2 and G4 respectively, IL-1 decreased and IL-6 increased. LEP decreased in the G4 group compared with G2 (Table 1).

Traditional Chinese medicine believes that the “endogenous damp-heat syndrome” caused by high-fat diets plays an important role in the development of colorectal cancer. It suggests that the use of “aromatizing moisturizing and spleen rejuvenating” herbs such as eupatorium can prevent the endogenous damp-heat syndrome caused by high-fat diet. Eupatorium, a Chinese medicine herb, has a long history of traditional use in China, which had pharmacological functions such as anti-inflammatory, anti-hyperlipidemic, anti-hypertensive, anti-virus, and anti-tumor activities, et al. [15-16]. But how eupatorium can inhibit colorectal cancer and what is the possible mechanism? 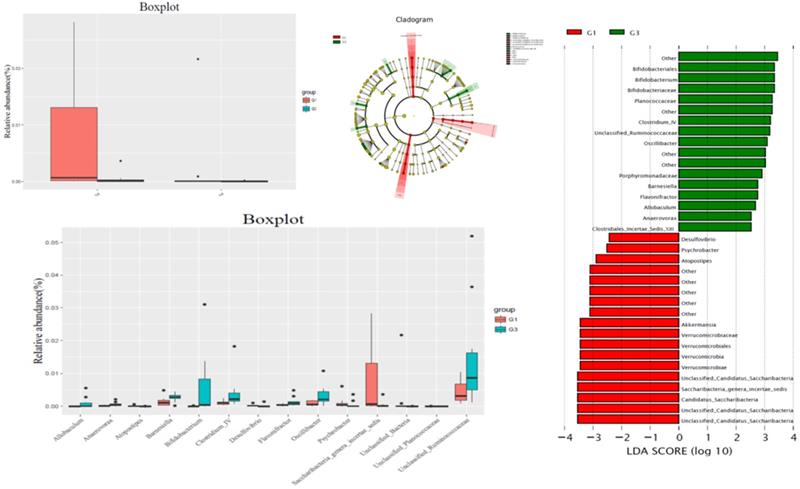 Changes in metabolism and inflammatory factors in each group (n = 40) 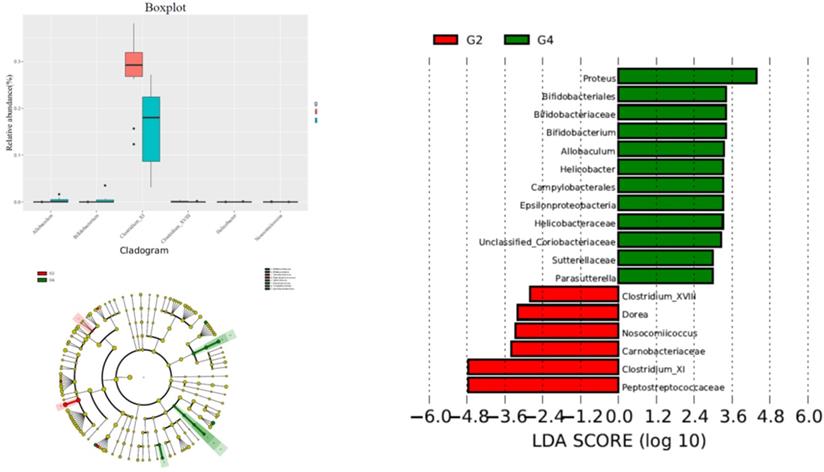 In this study, P-Cymene, a major composition from eupatorium extract was used for the prevention of colorectal cancer and it was found that P-Cymene can significantly reduce the incidence of colorectal cancer by DMH. In the DMH induced model without P-cymene (G2), 8 colorectal tumors were formed in 7 rats (70%). Among them, 2 tumors were signet ring cell carcinoma. While in DMH + P-cymene group (G4), 4 colorectal tumors were formed in 4 rats (40%), whose pathological diagnosis was adenocarcinomas. Therefore, from the aspects of incidence of colon cancer, the number tumors, and the tumor pathological features, the P-cymene can reduce the incidence of colorectal cancer associated with a high-fat, high-calorie diet. Nabavi SM and others had reported that P-cymene had antibacterial and antioxidant effects [17-18]. Others studies had shown that P-cymene also had analgesic and anti-inflammatory effects, by activating MAPK and NF-κB pathways to achieve antibacterial, anti-inflammatory, analgesic effects [19-21]. Kisko G et al found that P-cymene can inhibit the activity of E. coli [22]. Soltanian S et al. [23] found that P-cymene had broad-spectrum antitumor effect and antioxidant effect. But there are few reports on the effects of P-cymene on gut flora.

What is the mechanism of action of P-cymene in preventing colorectal cancer? Chronic inflammatory states caused by high-fat high-calorie diets are related to the occurrence of colorectal cancer [24-26]. In our study, P-cymene had tendency to decrease the cholesterol and low-density lipoprotein, but the difference is not statistically significant. However, IL-1, IL-6, COX-2, and leptin had statistically significant differences in using the P-cymene group, which suggest that P-cymene may play a preventive role by affecting the expression of inflammatory factors. Li et al. [7] also found that the eatract of Eupatorium be endowed with anti-inflammatory property.

Gut dysbacteriosis plays an important role in development of colorectal cancer [1-2]. Bifidobacterium is a probiotic with protective effect on gut micro-environment. Qian et al. had confirmed that the use of triple strains such as Bifidobacteria can restore intestinal flora imbalance caused by high-fat diets [27]. Clostridium IV is closely related to obesity caused by excessive calorie intake, and Clostridium IV can reduce the inflammatory state of the intestine [28-29]. It is reported in the literature that Allobaculum is also a probiotic and belongs to the Mycoplasma family. Supplementation with Allobaculum can reduce the rapid weight gain caused by high-fat diets [30]. Ushiroda et al. [31] reported that the use of tea polyphenols can improve the intestinal flora caused by a high-fat, high-calorie diet. Our studies found that P-cymene can inhibit colorectal cancer related to high-fat diet by increasing the number of beneficial bacteria such as Bifidobacterium, Clostridium IV, and Heterobacteria in the gut.

In summary, this study found that P-cymene can inhibit the occurrence of high-fat, high-calorie dietrelated colorectal cancer. The mechanism of action may be by reducing the expression of inflammatory factors such as IL-1 and LEP, increasing the expression of IL-6 inflammatory factors and promoting the growth of probiotics such as bifidobacteria, isobacteria and clostridium IV in the intestinal tract.

13. Johansson ME, Larsson JM, Hansson GC. The two mucus layers of colon are organized by the MUC2 mucin, whereas the outer layer is a legislator of host-microbial interactions. Proc Natl Acad Sci U S A. 2011;108:4659-4665