Circular RNAs (circRNAs) are implicated in the initiation and progress of several diseases, including cancer. However, the precise role of circRNAs in human nasopharyngeal carcinoma (NPC) remains unclear. In this research, we found a new circRNA hsa_circ_0001554 (circRANBP17), which was derived from the RAN binding protein 17 (RANBP17). Our qRT-PCR data found that circRANBP17 expression was up-regulated in NPC tissue and cells. Functional silencing studies revealed that circRANBP17 inhibited NPC cell proliferation and invasion in vitro, and circRANBP17 down-regulation also reduced tumor growth in nude mice. MiR-635 was demonstrated as a direct target of circRANBP17; circRANBP17 up-regulated RUNX2 expression levels by sponging miR-635, thereby promoting NPC proliferation and invasion. Thus, our data provide the evidence for the first time that circRANBP17 is a new onco-circRNA via miR-635/RUNX2 axis regulation, and may function as a novel therapeutic target for NPC treatment.

Nasopharyngeal carcinoma (NPC) is a highly aggressive head and neck squamous cell carcinoma, which may be caused by genetic, Epstein Barr virus, or environmental factors [1, 2]. More than 70% of NPC patients are initially diagnosed with advanced locoregional disease due to disease aggressiveness, and a lack of specific symptoms [3]. Similarly, complex pathogenesis and biological processes are key challenges facing the development of NPC therapeutics [4]. Thus, better understanding of underlying pathological mechanisms is required to improve effective targeted therapies for NPC.

In present study, we observed that circRNA hsa_circ_0001554 (circRANBP17) significantly increased in NPC. Function assays showed that circRANBP17 promoted NPC proliferation and invasion in vitro, and increased tumor growth in vivo. Mechanistically, circRANBP17 appeared to act as a ceRNA of miR-635, directly targeting downstream RUNX2 and facilitating NPC progression. These data suggest that circRANBP17 may serve as a potential therapeutic target for NPC.

Thirty-eight (38) NPC tissues and 13 freshly frozen normal nasopharyngeal epithelial tissues were selected from the First Affiliated Hospital of Zhengzhou University. Washed in phosphate buffer saline (PBS) following collection, tissues were stored at -80 °C until required. Study protocols and research methods were reviewed and authorized by the Ethics Committee of our hospital, and were conducted according to the Declaration of Helsinki. All patients voluntarily provided the written informed consent.

CircRANBP17 localization was evaluated using the PARIS™ Kit (Thermo Fisher Scientific). Briefly, cells were incubated in lysis solution, and then centrifuged for 3 min at 12,000 g. The supernatant and nuclear pellet were then used for cytoplasm RNA extracted, and qRT-PCR was conducted to assess circRANBP17 levels in the cytoplasm and nuclear fractions of NPC cells. 18S rRNA was chosen as a control for the cytoplasmic fraction, and U6 as a control for the nuclear fraction.

At 24 h post-transfection, cells were placed in 96-well culture plates (3 × 103 cells per well). Cell viability assays were then performed using the Cell Counting Kit-8 (CCK8; Dojindo, Japan) based on manufacturer's instructions. The absorbance at 450 nm was counted and recorded on a spectrophotometer.

Processed cells were cultured in 6-well plates for 14 days to allow colony formation. After fixing in 4% paraformaldehyde, cells were stained in 0.1% crystal violet (Solarbio). Cell proliferation was estimated by the number of colonies with > 50 cells.

Cell invasion assays were conducted with cells (1 × 105) cultured in Transwell upper chambers pre-coated with 2 mg/ml of matrigel (BD Biosciences, CA). In the top chamber, the medium was serum-free, whereas in the lower chamber, the medium was supplemented with FBS (10%). Approximately 24 h later, cells in the upper chamber were harvested with a cotton swab, fixed in methanol, stained in 0.1% crystal violet and counted under a microscope (Olympus).

Wild-type (Wt) and mutated (Mut) binding sites from miR-635 in the hsa_circ_0001554 sequence, or the RUNX2 3'-untranslated region (UTR) were sub-cloned into the pmirGLO reporter vector (Promega, Madison, WI), to construct circRANBP17-Wt/Mut and RUNX2-Wt/Mut. At 70% confluence, cells were transfected with either miR-635 or NC-mimics. After 24 h, luciferase activity was measured using a Luciferase Reporter Assay System (Promega).

RIP assays were performed using the Imprint® RNA Immunoprecipitation Kit (Sigma-Aldrich) as per manufacturer's instructions. Briefly, 1 × 106 cells were lysed with RIP buffer and then incubated overnight with antibody-coated magnetic beads at 4 °C. Anti-immunoglobulin G (Anti-IgG) served as the reference for anti-argonaute-2 (Anti-Ago2). After RNA was isolated from the magnetic beads, qRT-PCR was conducted to analyze circRANBP17 and miR-635 expression levels.

Western blot assay was explored according to the previous study [12]. Primary antibodies RUNX2 (anti-RUNX2, ab23981) were get from Abcam.

The up-regulation and identification of hsa_circ_0001554 in NPC

Hsa_circ_0001554 (circRANBP17) is derived from exons 2-5 of the RANBP17 gene on chromosome 5:170305100-170323119. Its spliced mature sequence length is 471 base pairs (bp) (Fig. 2A). Next, to identify circRANBP17 as a circRNA, we used actinomycin D to treat NPC cells, and RNase R to digest isolated RNA from cells. Actinomycin D assays showed that circRANBP17 expression changed little, when compared to decreased RANBP17 in actinomycin D-treated NPC cells (Fig. 2B and 2C). RNase R assays revealed that this treatment degraded the RANBP17 linear transcript, but was ineffective towards circRANBP17 (Fig. 2D and 2E). Our subcellular localization analyses showed that circRANBP17 was predominantly localized to the NPC cytoplasm (Fig. 2F). Together, these data suggested that circRANBP17 overexpression was typical in NPC, which may elicit key functions in NPC development. 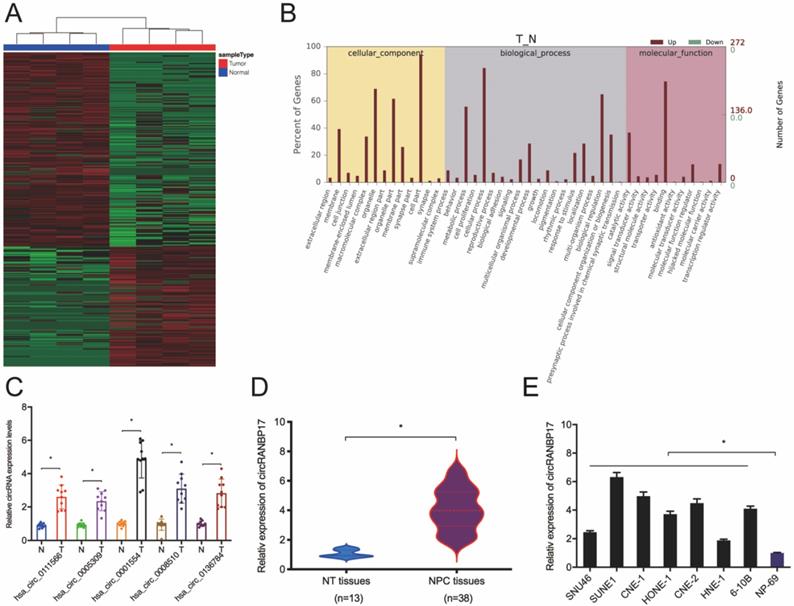 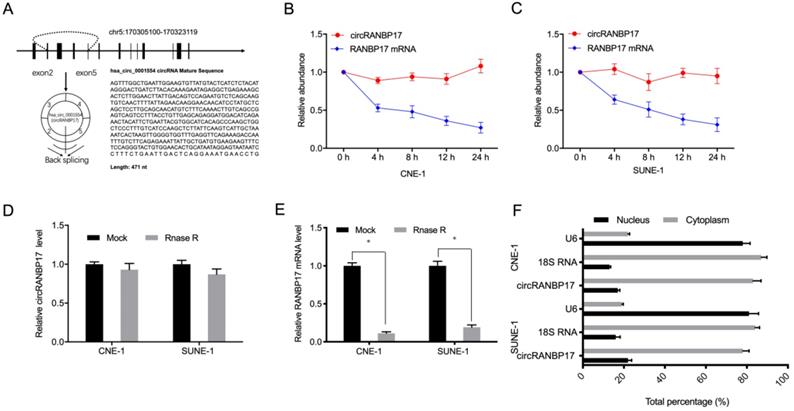 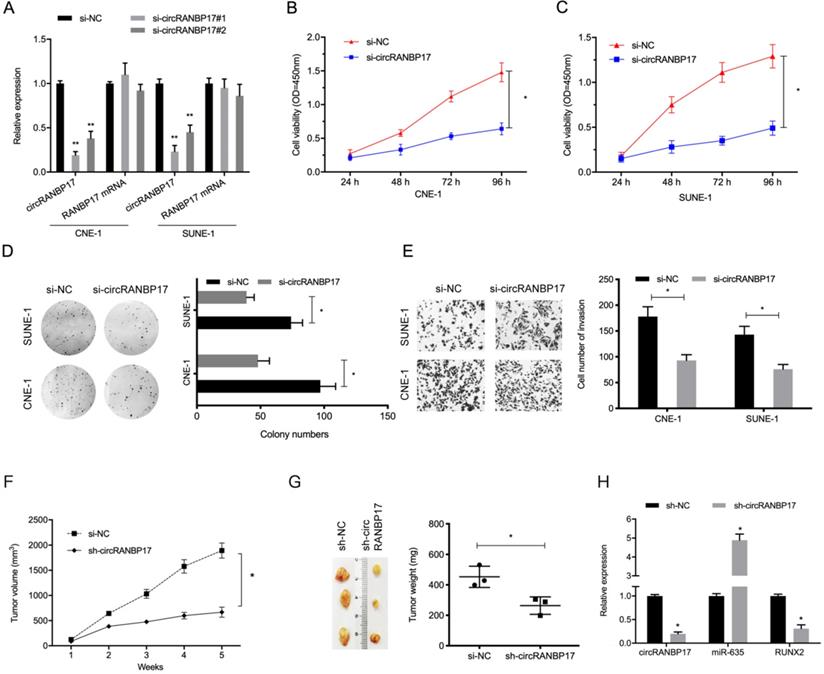 Next, we tested whether sh-circRANBP17 exerted biological functions by promoting cell growth in vivo; RANBP17 suppression significantly reduced tumor growth in nude mice when compared to the control group (Fig. 3F-3H). These data indicated that circRANBP17 appears to promote growth in NPC.

Data from this study indicated that circRANBP17 was mainly localized to the cytoplasm, suggesting it could act as a miRNA sponge. To further investigate underlying mechanisms, we used the online databases, circBank and CircInteractome to explore potential miRNAs that may be sponged by circRANBP17. We identified miR-635, miR-1200 and miR-1265 (Fig. 4A). Of these miRNAs, miR-635 was significantly decreased in NPC tissues and cell lines (Fig. 4B and 4C), therefore it was chosen for further study. A dual-luciferase reporter assay presented that miR-635 mimics significantly decreased luciferase activity of circRANBP17-Wt, but not circRANBP17-Mut (Fig. 4D and 4E). A pulldown assay showed that endogenous miR-635 binding to circRANBP17 was specifically enriched by qRT-PCR analysis (Fig. 4F). Our qRT-PCR data showed that circRANBP17 silencing induced miR-635 expression levels in NPC cells (Fig. 4G). Moreover, fluorescence in situ hybridization (FISH) also showed that circRANBP17 and miR-635 were primarily expressed in the cytoplasm of NPC cells, suggesting sponging effects between them (Fig. 4H). Altogether, all these findings showed that circRANBP17 could act as a sponge for miR-635 in NPC cells.

We used Targetscan7, mirTarBase and MicroT-CDS to investigate miR-635 target genes. Using intersection analyses, we identified 11 potential genes (Fig. 5A). Next, we explored the expression of these 11 genes using the TCGA database (Fig. 5B) and chose RUNX2 for subsequent study. We identified the potential binding site in miR-635 and the RUNX2 3'-UTR (Fig. 5C). A luciferase activity assay revealed that miR-635 mimics significantly impeded luciferase activity of the RUNX2-Wt 3'-UTR luciferase vector, whereas no effects were observed for the RUNX2-Mut 3'-UTR (Fig. 5D). Next, we explored RUNX2 expression in NPC tissue; our IHC data showed that RUNX2 expression levels were significantly increased in tumor tissues (Fig. 5E), which were further confirmed using the TCGA database (Fig. 5F). We also performed Kaplan-Meier analyses which showed that elevated RUNX2 expression levels were certainly associated with poor overall survival of NPC patients (Fig. 5G and 5H). Similarly, qRT-PCR showed that miR-635 overexpression decreased RUNX2 expression in NPC cells (Fig. 5I). These combined data showed that miR-635 targeted RUNX2 in NPC cells. 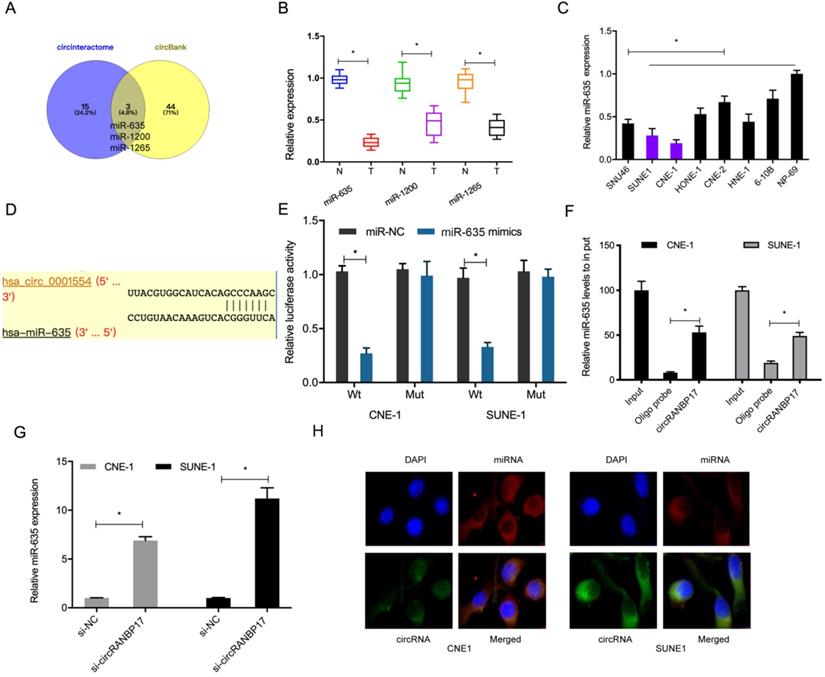 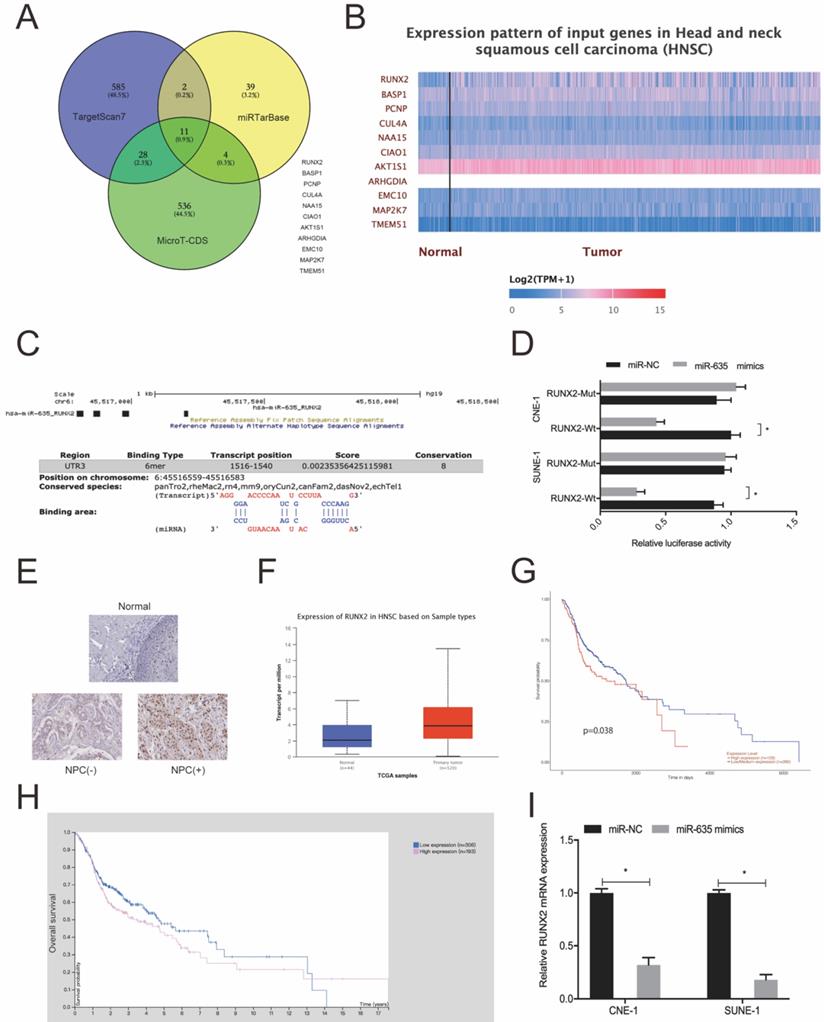 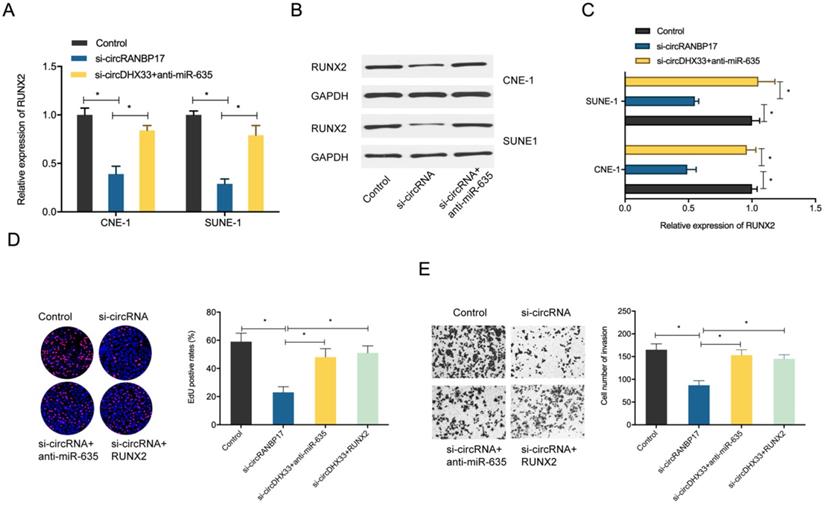 Using high-throughput sequencing analysis, we identified and characterized a novel circRNA, circRANBP17, which is back spliced from exons 2-5 of RANBP17. Interestingly, this gene was significantly overexpressed in our NPC tissues and cell lines. Next, we explored circRANBP17 in NPC progression, and revealed that circRANBP17 down-regulation blocked cell proliferation, invasion in vitro, colony formation and tumor growth in vivo, suggesting RANBP17 may have carcinogenic functions during NPC progression.

Schematic of the circRANBP17/miR-635/RUNX2 axis in NPC. 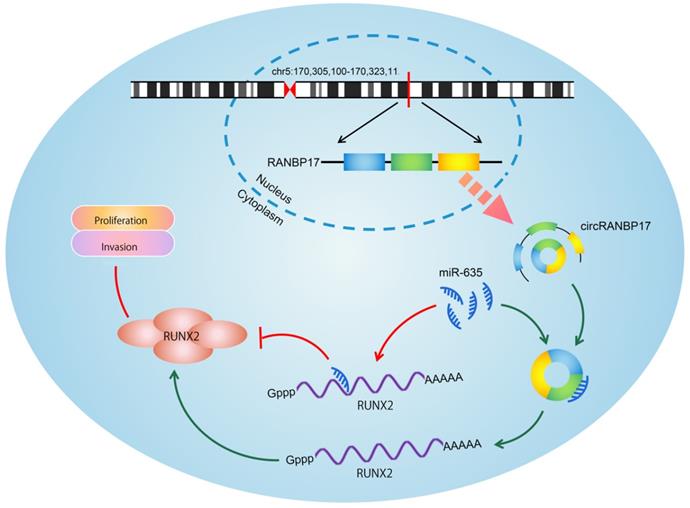 RUNX2 is a member of the mammalian Runt related transcription factor family, which have important roles in cancer development [25], however, precise RUNX2 functions and associated mechanisms in NPC remain unclear. In this study, we observed that RUNX2 was increased in NPC, and was a target of miR-635. In rescue assays, forced RUNX2 expression reversed si-circRANBP1 mediated inhibitory influences on NPC cell proliferation and invasion. Hence, these data suggested that circRANBP1 regulates NPC development by regulating the miR-635/RUNX2 axis.

In summary, our study is the first to demonstrate that circRANBP1 is an oncogenic circRNA in NPC, and facilitates cell proliferation and invasion by functioning as a ceRNA of miR-635 to increase RUNX2 expression levels. Hence, these data potentially provide a promising biomarker and therapeutic target for NPC.

MHZ, RL, YJZ conceived and designed this study. MHZ, PWZ, YLZ conducted the experiments and analyzed and checked the data. RL supervised the whole project and revised the manuscript. All authors read and approved the final manuscript.

This research was approved by The First Affiliated Hospital of Zhengzhou University and conducted in accordance with the principles of the Declaration of Helsinki.