Tumor-derived Exosome Promotes Metastasis via Altering its Phenotype and Inclusions

Although tumor-derived exosomes play an important role in the process of metastasis, differences in exosomes secreted by the same cells at different stages or conditions have not been noticed by most of the relevant researchers. Here we developed a lung cancer model in nude mice, and the phenotype and inclusions of exosomes secreted by early and advanced tumors were analysed. The size distribution and surface topography of these two exosomes were not significantly different, but the expression of CD63 in early tumor exosome (E-exosome) was significantly lower than that in advanced tumor exosome (A-exosome). α-SMA expression on HELF cells treated with A-exosome was significantly higher than that treated with E-exosome. The ability of A-exosome to promote the migration of A549 cells was better than E-exosome. Furthermore, small RNA sequence showed that only 3 of the 171 detected-small RNAs were expressed simultaneously in both exosomes. These findings proved that there are significant differences in inclusions and functions between the early and late exosomes of the same tumor. The study highlights the importance of exosomes in cancer metastasis, and might suggest exosomes can be used as biomarkers and therapeutic targets for cancer metastasis.

Exosomes are nanosized (30-200 nm) vesicles that secreted by almost all cells [1, 2]. The surface of exosomes is rich of tetraspanins (CD9, CD63, CD81 and CD82) and immune regulator molecules (MHCI, MHCII, and CD86) as well as some lipid rafts. In many recent researches, tetraspanins are wildly used in exosomes recognition [3-7]. In addition, with the difference of original cell type, the surface of exosome often contains some specific biomarkers which are abundant on original cell surface [8, 9]. Furthermore, the inside of the exosomes is also rich in enzymes (GAPDH, Enolase, PK, ATPase, PGK1), RNA (miRNA, mRNA), MVB biogenesis (Alix, TSG101, Clathrin, Ubigutin), heat shock proteins (HSP60, HSP70, HSP90, HSC70), signal transduction (EGFR, CDC42, PI3K, ARF1, G proteins, MUC1, B catenin) which come from initial cells [8-10].

Many recent studies have showed that exosomes play an important role in the communication between cells [11-14]. It is also demonstrated that miRNAs packaged in exosomes are related to MPC-mediated regulation of muscle fibrogenic cell collagen production [15]. Resulting from the small size and good biocompatibility, exosomes have been wildly used as vehicles for miRNA or drug delivery [6, 10, 16, 17]. It has also reported that viral resistance can be transferred from activated cells to non-activated cells via exosomes [4]. Moreover, exosomes lead to tumor metastasis through inducing vascular leakiness, inflammation, bone marrow progenitor cell recruitment [18]. And the integrins on exosomes cause organ-specific tumor metastasis [19-23].

Exosome is a hot research topic, and many related studies have been published [6, 13, 19, 24, 25]. However, almost all of those researches have neglected the difference between the exosomes from same cells at different stages or conditions, especially for the cases that using exosomal miRNA for cancer diagnostics and therapy [26]. We hypothesized that exosomes are tools by which cells communicate with outside [1, 13, 14] to fulfill the needs of its own function [27-30]. Hence, the exosomes secreted by early and advanced tumors may be different caused by their different needs. In the present study, for the first time, we compared the difference between exosomes secreted by the tumor cell at different stages of metastasis. And found that there was no significant difference in physicochemical properties between them, while the biological phenotype and inclusions (such as miRNAs) having significant differences. Furthermore, the exosomes from differential stage tumors trigger functional differences in promoting tumor metastasis.

Characterization of Physicochemical Properties of Exosomes

The early and advanced stages are determined according to the size of the tumor and the time of tumor implantation [31]. In the present study, we defined the mice intrapulmonary implanted with A549 cells for 14 days (tumor diameter < 2 mm) as early stages, and 35 days (tumor diameter > 5 mm) as advanced stages. To investigate whether there are differences between exosomes secreted by early tumors (E-exosome) and advanced tumors (A-exosome), we first examined the physical and chemical properties of exosomes. The size distributions of two kinds of exosomes were determined with Nanoparticle Tracking Analysis (NTA, Nanosight), the diameters of two kinds of exosomes are range from 45 to 200 nm (Fig. 1A-B). Atomic force microscope imaging (AFM, Bruker Co, Germany, Fig. 1C-D) and transmission electron microscopy (TEM, JEM-1400plus, Japan, Fig. 1E-F) results proved the good homogeneity of E-exosome and A-exosome. The Flow cytometer (Becton Dickinson FACS AriaIII cell sorter) was used to determine the expression of CD9 and CD63 on the exosomes derived from early tumor and advanced tumors. The expression of CD63 were significant differences between CD9+ E-exosome and CD9+ A-exosome. Compared with CD9+ E-exosome, the expression of CD63 on CD9+ A-exosome obviously increased (Fig. 1G-H). To further confirm the expression of CD9 and CD63 observed by flow cytometry, western blot analysis was performed. The result was consistent with that obtained from the flow cytometric analysis (Fig. 1I). Overall, there was no significant difference in the size and shape of the two exosomes, but the biological phenotypes were significantly different.

The effects of E-exosome and A-exosome in promoting tumor metastasis. A, The expression of α-SMA on HELF cells after treated with 1x109 total E-exosome and A-exosome. B, Quantitative analysis of α-SMA expression by fluorescence intensity. C-E, Representative photos and quantification of exosomes promoting the migration of A549 and PC-9 cells through transwell model. Bars represent the mean ± SD (n=3); **, P < 0.01. 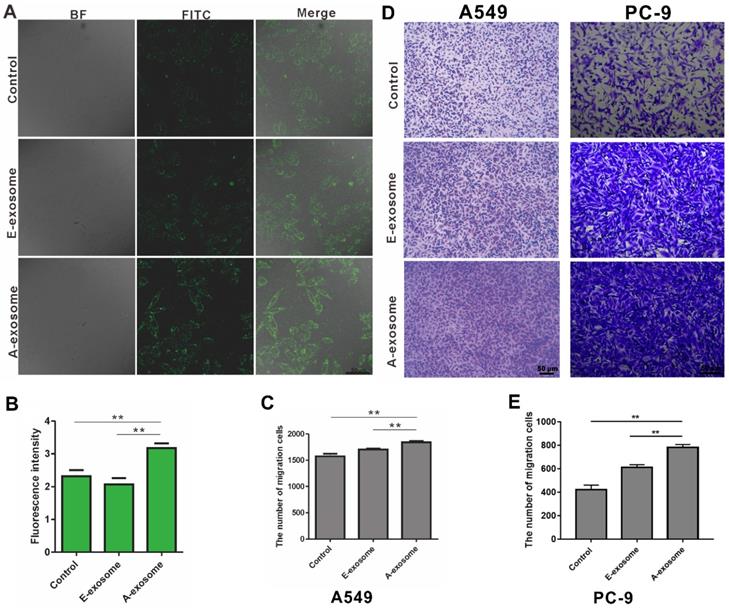 The effects of tumor-derived exosomes to distance organ have been widely reported, and these effects may promote cancer metastasis [32-34]. To determine the effects of E-exosome and A-exosome on metastasis, two kinds of exosomes were incubated with human embryonic lung fibroblast (HELF) cells, and the expressions of α-SMA on HELF cells were examined after incubation. The expression of α-SMA on HELF cells after treated with A-exosome is obviously high than that after treated with E-exosome (Fig. 2A-B). The expression of α-SMA indicates the transformation of fibroblast to myofibroblast, and the fibroblast-myofibroblast transition can support tumor growth, vascularization, and metastasis [35]. These results proved that A-exosome promotes cancer metastasis by inducing the transformation of fibroblast to myofibroblast. The proliferation of myofibroblasts increased lymph angiogenesis, and it also associated with lymph node metastasis. While E-exosome-treated HELF cells did not exhibit this level of fibroblast-myofibroblast transition. To further examine the function of two exosomes to cancer metastasis, the effects of two kinds of exosomes to A549 cells were determined. After treating with E-exosome and A-exosome respectively, the migration of A549 were determined. The migration of A549 cells from upper chamber to lower chamber of transwell were rapidly increased after incubation with A-exosome, and the effect of E-exosome in promoting migration were obviously less than that of A-exosome (Fig. 2C-D). Moreover, the migration of PC-9 cells after treatment with exosome was consistent with A549 cells (Fig. 2D-E). This migration-promoting effect can be considered as an active regulation of tumor tissue to cancer metastasis through exosomes. Exosomes are the tools that cells used to communicate with outside and perform functions. In the advanced stage of tumor, the tumor has the characteristics of metastasis, and the exosome secreted by advanced tumor can contribute to tumor metastasis. There is no tendency to metastases in the early stage tumor, therefore the exosome secreted by the same tumor in early stage has no such functions of promoting metastasis. 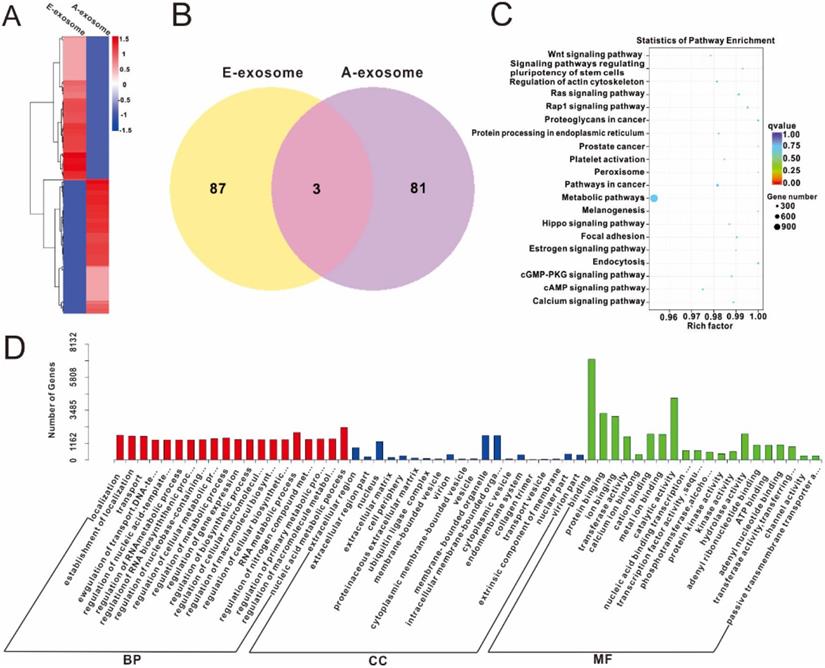 The process of miRNA analysis is shown in Fig. S1. We first removed the sequences of low quality, the sequence of the unpredictable base sequence proportion over 10%, the sequence with 5' or 3' broken and poly A/T/G/C sequence. The filtered sequences are clean reads. As shown in Table S1, there are 91.31% clean reads in E-exosome and 89.32% clean reads in A-exosome. The frequency percentage of sequence length between 26-30 nt were significantly increased in A-exosome than in E-exosome (Fig. S2A-B). After the length filtering, all the reads were mapped to the reference sequence. The percentage of mapped small RNA, mapped forward sequence RNA and mapped reverse sequence RNA were showed in Table S2. There are more mapped sRNAs in A-exosome (18.13%) than that in E-exosome (14.38%). The density of reads of all chromosomes in each sample was compared to that of the genome. The results of distribution of reads on each chromosome were examined by Circos mapping. The different distribution of reads on each chromosome between E-exosome and A-exosome proved that the inner reads in two kinds of exosomes are different (Fig. S2C-D). Overall, the amount and type of reads in E-exosome and A-exosome are different, which will lead to functional differences between the exosomes. 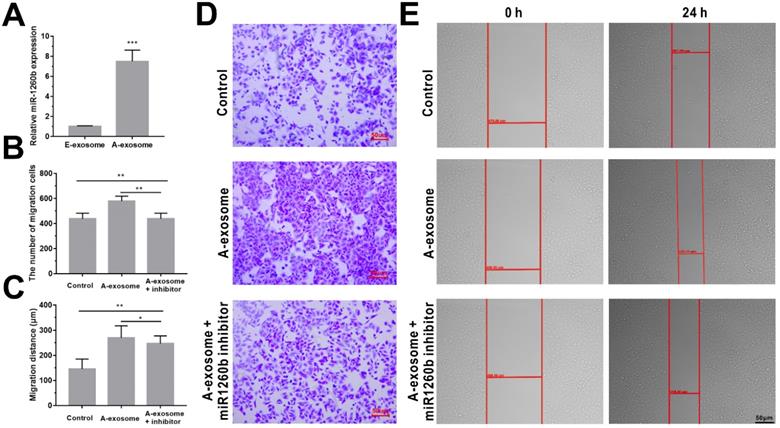 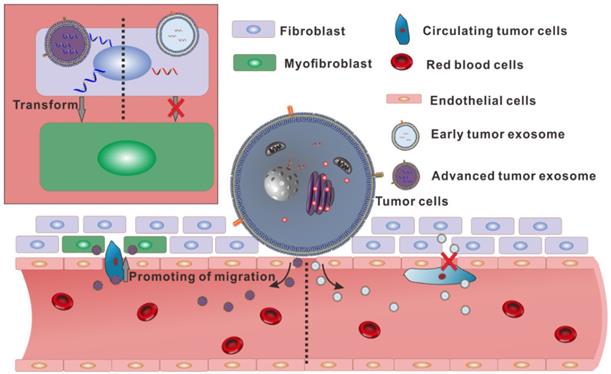 To sum up, there is no significant difference in appearance between the exosomes secreted by the same tumor in different stages. However, in the content of the two exosomes, there are huge differences in small RNA. Especially, the high expression of hsa-miR1260b in A-exosome may relate to the increasing of migration of A549. And over-expression of α-SMA in fibroblast after treated with A-exosome also contributed to lymph angiogenesis and lymph node metastasis (Fig. 5). These differences make the two kinds of exosomes from the same tumor have different functions in promoting transformation of distal tissue and enhancing the migration of tumor cells. These results showed that the same cells could secrete various exosomes with different functions.

In conclusion, the present studies demonstrated that tumor-derived exosome promotes metastasis via altering its phenotype and inclusions. This new discovery might suggest exosomes can be used as biomarkers for cancer metastasis. Furthermore, these new findings also provide further insights for optimized cancer metastatic prevention strategies such as by targeting and eliminating blood oncogenic exosomes.