Objective: Gastric cancer is one of the most common malignant tumors in the world. IGHG1 is a differentially expressed protein screened out in gastric cancer in the early stage of the subject group. This topic explores the expression of IGHG1 in gastric cancer and the effect of IGHG1 on the proliferation, migration, invasion and EMT of gastric cancer SGC7901 cells and its mechanism of action.

Results: 243 proteins related to gastric mucosal lesions were preliminarily identified. We found that IGHG1 is highly expressed in gastric cancer tissues compared with normal control tissues. IGHG1 promotes the proliferation, migration and invasion of gastric cancer cells. Compared with the control group, the expression of EMT-related proteins Vimentin, N-cadherin, TGF-β, P-SMAD3 was decreased and the expression of E-cadherin was increased after IGHG1 low expression.

The IGHG1 gene is located on chromosome 14 q32.33, and the protein encoded by it is one of the subtypes of immunoglobulin IgG, which is located in the C region of the Igγ-1 chain [3]. There are five different types of human immunoglobulins: IgM, IgD, IgG, IgE, and IgA [4]. IgG is an important component of the adaptive immune system, accounting for 75-80% of the total Ig pool [5]. IgG is composed of heavy and light chains, including α chain, δ chain, ε chain, γ chain and μ chain, and light chains including κ chain and λ chain. IGHG1 plays an important role in the occurrence and development of tumors. Its expression in ovarian cancer [6, 7], pancreatic cancer [3], prostate cancer [8, 9], papillary thyroid carcinoma [5] and other malignant epithelial tumors is significantly increased. It is involved in the pathological process of tumor cell EMT, proliferation, apoptosis resistance, immune escape and metastasis.

For LCM, 20 paired samples of normal gastric mucosa, atypical hyperplasia, poorly differentiated gastric adenocarcinoma, and lymph node metastatic carcinoma were taken from surgical resection of tumor specimens in the First Affiliated Hospital of South China University. None of the above patients received preoperative radiotherapy and chemotherapy.

The target tissue was captured from frozen sections of gastric mucosal lesions using a Laser Capture Microdissection Microscope. Adjust the laser aperture, speed and intensity according to the distribution of field of vision, magnification and target tissue. In order to reduce individual genetic differences, all cut and purified tissues were from different tissues of 20 patients with gastric cancer. The purified tissues were classified and mixed for identification by iTRAQ labeling and two-dimensional liquid chromatography coupled with mass spectrometry.

All the cell lines were cultured in a complete medium containing a mixture of 1640 medium (RPMI) and fetal bovine serum at a ratio of 9:1, and the culture flask was placed in a constant temperature and humidity cell incubator for routine culture.

Antibodies and reagents used in the experiment

The gastric cancer tissue chip was dewaxed to water and repaired with citric acid (P=6.0). Immunohistochemical staining was performed with reference to the instructions of the two-step assay kit (KIT-9710, Fuzhou Maixin Biotechnology Development Co., Ltd.). The IGHG1 antibody was diluted with PBS buffer at a dilution ratio of 5:50, DAB was developed, and hematoxylin was stained with nuclei.

Total cellular protein was extracted using a lysis buffer containing a protease inhibitor. The protein concentration was determined by the BCA method. Total protein was separated on an SDS-PAGE gel and transferred to a PVDF membrane. Skim milk is blocked and antibody-fed, using β-actin as an internal reference.

800 cells per well were inoculated into a 6-well plate, and a secondary well was set, and the culture solution was periodically replaced. When the cell mass was visible to the naked eye, the culture was terminated, the paraformaldehyde solution was fixed, and the crystal violet staining solution was stained, and the microscopic count was greater than 50 cell clones.

Matrigel and RPMI were formulated into working fluids in a ratio of 1:6. 50 μl of the working solution was added to the upper chamber of each chamber, evenly tiling, and incubated for 7 h (this step is not required for the migration assay). 200 μl (density 2×105 cells/mL) cell suspension was added to the Matrigel-coated Transwell chamber. Fixed with paraformaldehyde 24 h later, stained with crystal violet staining solution. The number of invading cells was counted by three fields under the microscope.

This study used paswstat and GraphPad Prism 5 software for statistical analysis. The data listed in this study are expressed as mean ± standard deviation, in which immunohistochemical staining results are statistically analyzed using Fisher's exact probability test; Western blot and cell clone formation assay results were analyzed by One-way ANOVA; MTT assay results were analyzed by Two-way ANOVA. All statistical analysis results showed that the difference was statistically significant at P<0.05.

In order to further understand the molecular mechanism of gastric cancer and obtain valuable diagnostic markers. The research group collected twenty matched gastric cancer tissues classified as normal gastric mucosa (NGM), atypical hyperplasia (AH), gastric poorly differentiated adenocarcinoma (GPDAC) and lymph nodes metastasis adenocarcinoma (LMGAC) for surgical excision of specimens. The above tissues were purified by Laser capture microdissection (LCM). Total proteins in different tissues were extracted and isotopically labeled. Through isobaric tags for relative and absolute quantification (iTRAQ) combined with two-dimensional liquid chromatography-tandem mass spectrometry (2D LC-MS/MS), the analytical chromatography of these different tissues was performed for quantitative analysis and detection. The expression of the identified protein was up-regulated when the quantitative ratio was greater than 1.5 and down-regulated when the quantitative ratio was less than 0.667. A total of 243 proteins related to gastric epithelial cancer were identified, 153 of which were up-regulated (Table 1) and 90 down-regulated (Table 2) in gastric cancer tissues. Among them, IGHG1 was up-regulated in gastric cancer. 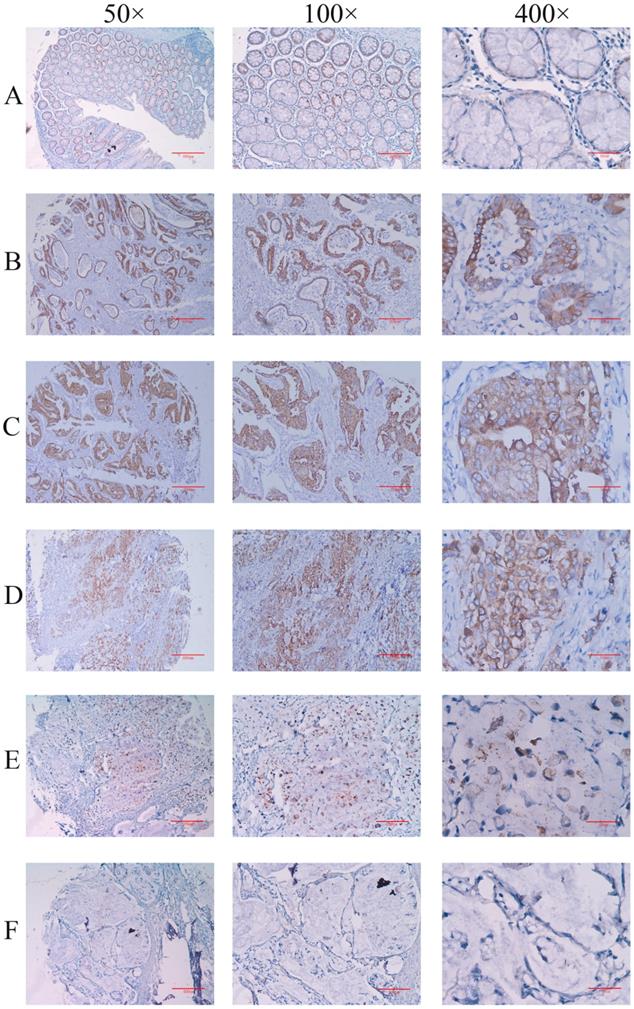 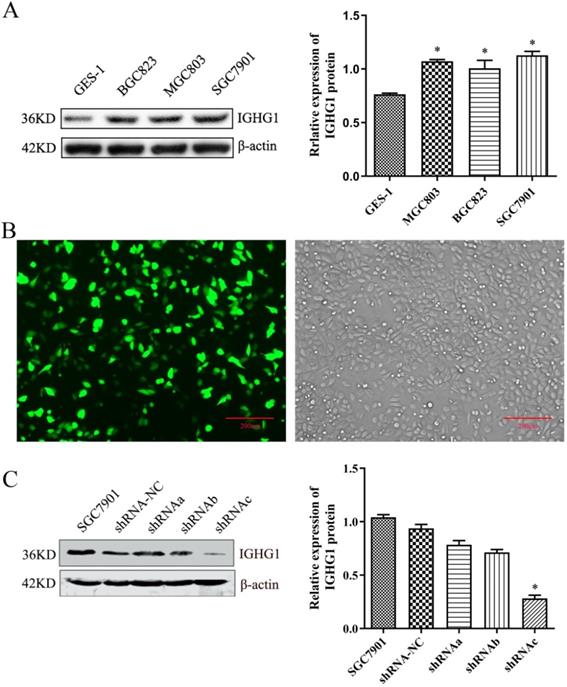 Effect of low expression of IGHG1 on proliferation of SGC7901 cells 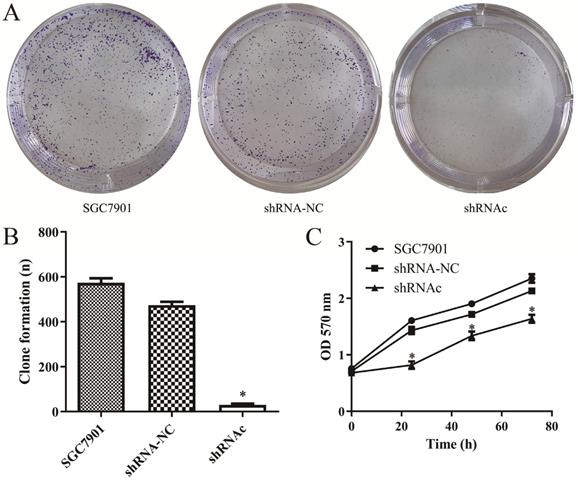 Gastric cancer is one of the malignant tumors with the highest morbidity and mortality in the world [1]. The occurrence and development of gastric cancer is a complex pathological process involving multiple stages and multiple factors. Quantitative proteomic analyses can provide information for the search of potential biomarkers [10]. At present, laser capture microdissection (LCM) is one of the best methods to purify tissue [11]. Isobaric tags for relative and absolute quantification (iTRAQ) is widely used for differential expression and quantitative detection [12]. The quadrupole time-of-flight tandem mass spectrometer (Q-TOF MS/MS) has high accuracy, high sensitivity and high resolution, which is conducive to the determination of extreme molecular weight, extreme PH and low abundance proteins [13]. According to iTRAQ technology and 2D LCMS/MS, 243 differentially expressed proteins related to gastric cancer were preliminarily screened and identified, including IGHG1. It provides abundant material and experimental basis for search proteins in early diagnosis of gastric cancer.

The IGHG1 gene is located on chromosome 14, which is a protein-coding gene and is closely related to the occurrence and development of tumors. Immunoglobulin was traditionally thought to be produced by lymphocytes and plasma cells. Heavy and light chains of IgG have been detected in the cytoplasm of many human cancer cell lines [14]. The study found that IGHG1 was highly expressed in tumors such as ovarian cancer, and participates in pathological processes such as EMT, proliferation, apoptosis resistance, immune escape and metastasis of tumor cells [6, 7]. Studies have also found that IGHG1 was significantly more expressed in pancreatic cancer tissues than in non-cancer tissues, IGHG1 downregulates the cytotoxic effects of NK cells by inhibiting the antigen-dependent cytotoxic function, leading to proliferation and immune escape of pancreatic cancer cells [15]. In current study, low expression of IGHG1 can inhibit the growth and induce apoptosis of prostate cancer cells [8]. Its expression and mechanism of action in gastric cancer remains unclear. Based on previous studies, we found that IGHG1 was highly expressed in gastric cancer, participated in the proliferation, migration and invasion of SGC7901 cells and affects EMT of SGC7901 cells. 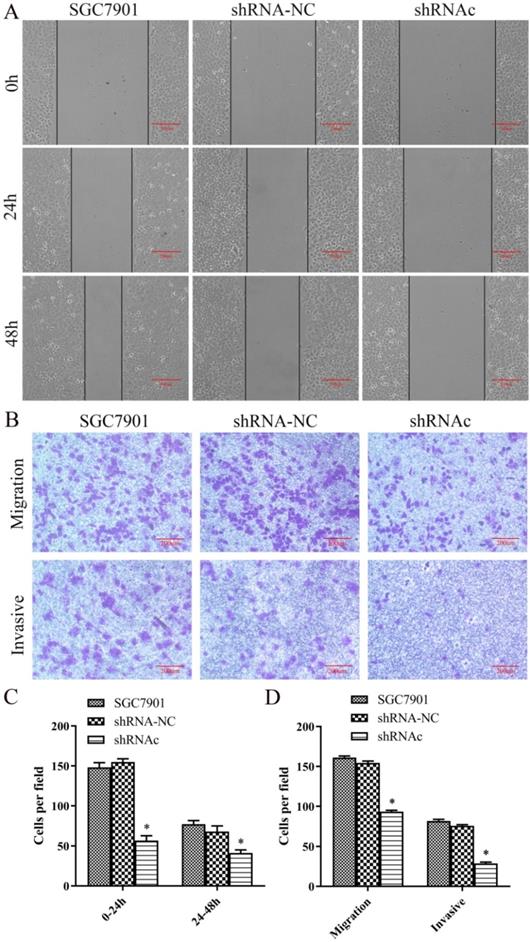 A large number of studies have found that the occurrence of EMT biological behavior plays an important role in the metastasis of malignant tumors [16-18]. In gastric cancer, many signaling pathways were involved in the regulation of EMT, and signaling pathways such as PI3K/AKT [19], MEK/ERK [20], and WNT/β-Catenin [21], especially TGF-β/SMAD [22, 23] play important roles. Tumor cells transform from epithelial cells to stromal cells stimulated by TGF-β signaling was mediated by the SMAD pathway [24, 25]. Members of the SMAD protein family are transcription factors that transmit TGF-β stimulation signals from cell membranes to the nucleus [26, 27]. In our experiments, the expression of EMT signaling pathway protein TGF-β was decreased in SGC7901 cells when IGHG1 was poorly expressed, indicating that IGHG1 may promote the migration and invasion of gastric cancer cells through the TGF-β/SMAD signaling pathway. We found that the expression of P-Smad3 was significantly reduced after IGHG1 was poorly expressed, while the expression of SMAD3 was not significantly changed, which indicated that IGHG1 induced EMT in SGC7901 cells and promoted cell migration and invasion by regulating the activation of TGF-β/SMAD3 signaling pathway. Although IGHG1 interfered to reverse EMT occurrence in SGC7901 cells, there are still some shortcomings in this study. For example, this study only carried out follow-up analysis at the level of cell interference, and did not carry out in vivo experiments, which need to be verified by further experiments. 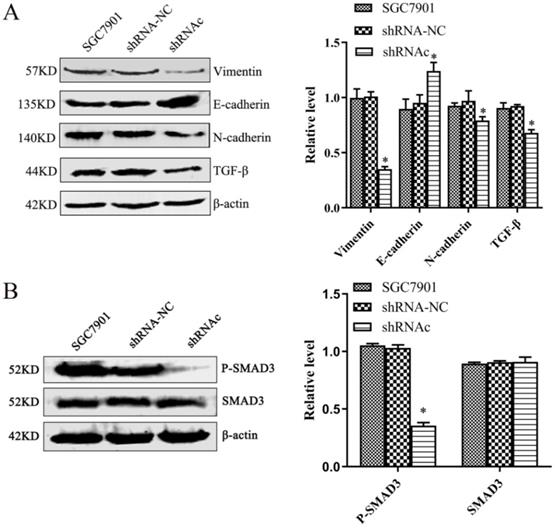 This study found that IGHG1 induced cell migration and invasion by inducing EMT in SGC7901 cells by modulating the activation of the TGF-β/SMAD3 signaling pathway. The molecular mechanism of IGHG1 affecting EMT in gastric cancer SGC7901 cells was preliminarily confirmed, which provided experimental and theoretical basis for elucidating the molecular mechanism of gastric cancer.