Hepatocellular carcinoma (HCC) is the most common type of primary liver cancer, accounting for approximately 80% of all cases, and intrahepatic cholangiocarcinoma (ICC) is the second most common liver cancer, accounting for about 15% of cases [1]. HCC is comprised of hepatocellular carcinoma cells (HCC cells) and ICC is comprised of intrahepatic cholangiocarcinoma cells (ICC cells). Besides, there is a form of primary liver carcinoma contains a mixture of HCC cells and ICC cells, namely combined hepatocellular cholangiocarcinoma (CHC), with an incidence varying from 1.0% to 14.3% of primary liver cancer in different studies [1-5]. Although the number of CHC cases is relatively small, it is difficult to diagnose before surgery and has a dismal prognosis [1, 6]. The data from a long-term prognosis study of liver cancer indicates that CHC has a significantly worse prognosis than HCC and ICC even after curative resection [1]. Given the special histological characteristics of CHC, we speculated that the unique cellular component of CHC could contribute to its dismal prognosis.

Epithelial-mesenchymal transition (EMT), a critical process in which cancer cells gain enhanced invasion, migration, and metastasis abilities, has been associated with poor prognosis [7]. Cells undergoing EMT show loose or no interactions among cells, lost the expression of certain adhesion molecules such as E-cadherin, and acquire the expression of mesenchymal-associated markers such as vimentin and snail [7, 8]. It has been shown that EMT is an important contributing factor to the development and progression of liver cancer [9, 10].

Laminins, a large family of extracellular matrix proteins, are comprised of three different chains (α, β and γ). Laminin-332 is a well-studied member of laminins and has been reported as an important regulator in the process of oncogenesis [11, 12]. LAMC2 encodes the γ2 chain of laminin-332 and is an important EMT-associated gene in various cancers including bladder cancer, colorectal cancer, lung cancer, and cholangiocarcinoma [13-16]. Early studies have reported that LAMC2 exists in the tumor microenvironments and influences the invasion and migration of cancer cells [17, 18].The tumor microenvironment plays a critical role in influencing the biological behavior of cancer cells. We speculate that there might be interactions between the HCC and ICC components in CHC, which contribute to the poor prognosis of CHC. For this purpose, we incubated HCC cells with culture supernatant from ICC cells, and examined possible mechanisms of action.

Cells were plated in a 100-mm dish at 40%-50% confluence, and the culture medium was replaced with fresh RPMI 1640 medium after cells attached to the plate. Twenty-four hours later, culture supernatant was collected and filtrated through a 0.22 µm filter (Millipore, Merck KGaA, MA, USA). The filtrated culture supernatants from HepG2, SNU-449, PLC/PRF/5, HCCC-9810, HuCCT1 cells, and cholangiocytes were used for subsequent experiments.

The culture supernatants were replaced every 3 days. After 14 days, cells were fixed in 4% paraformaldehyde for 15 min. After washing, cells were stained with 0.005% crystal violet solution for 1 h. The plates were aspirated, washed, and allowed to air dry. The morphology of cell colonies was observed using light or fluorescence microscopy.

For analysis of culture supernatants, the culture medium was centrifuged and filtrated with a 0.22 µm filter to remove cells. Supernatant samples (30 µl) were combined with 4 x loading buffer (10 µl), denatured, separated by SDS-PAGE, and analyzed as described above. Ponceau S staining of the PVDF membrane was used as the loading control for electrophoresis of the culture medium.

HepG2 and SNU-449 cells (2×104) were seeded in 96-well plates (Essen BioScience, Ann Arbor, MI, USA) and cultured overnight. Scratches were introduced by a Woundmaker (Essen BioScience). Wells were washed twice with serum-free medium, and different culture supernatants were added. After 48 h, images were obtained and analyzed. Six replicate wells from each cell treatment were analyzed.

After culture overnight in serum-free medium, cells (1×104) in 0.1 ml serum-free culture supernatant were placed into the upper chamber of a transwell insert (Corning, NY, USA) coated with Matrigel (BD Biosciences, San Jose, CA, USA). 0.5 ml culture supernatant with 10% FBS was added to the lower chamber. Twenty-four hours later, cells that migrated to the other side of the insert were fixed with 4% paraformaldehyde for 15 min following by crystal violet staining. These experiments were repeated three times.

Equal numbers of cells were seeded in 96-well plates and incubated with different culture supernatants. Cell growth was determined using the 3-[4,5-dimethylthiazol-2-yl]-2, 5-diphenyltetrazolium bromide assay (MTT) assay (Sigma, St. Louis, MO, USA). One-tenth volume of MTT diluted in serum-free medium was added to each well at different time points, and the plates were incubated at 37˚C for 4 h. Formazan crystals were dissolved in DMSO, and the absorbance at 595 nm was measured using a spectrometer (Bio-Rad, Philadelphia, PA, USA). Six replicate wells from each cell type were analyzed.

HepG2 cells (2×103) were seeded into 6-well plates and allowed to attach overnight. The culture medium was replaced with different culture supernatants containing 10 µM EdU (Beyotime, Nanjing, China) for 2 h. Cells were washed with PBS and fixed with cold 4% paraformaldehyde. After treating with 0.3% TritonX-100, washing with PBS and blocking, cells were incubated with Azide 555 and Hoechst 33342 (Beyotime). Fluorescence was immediately detected using a Nikon microscope (Tokyo, Japan). Experiments were repeated three times.

Cisplatin and doxorubicin were used to evaluate the effect of different culture supernatants on the chemotherapy sensitivity of the cells. Cells (4×103) were seeded into 96-well plates and allowed to attach overnight. Cells were then treated with the different culture supernatants containing various concentrations of cisplatin and doxorubicin. Twenty-four hours later, viable cells were determined using the MTT assay as described above.

Caspase 3 activity in HepG2 cells was detected using the Caspase 3 Activity Assay Kit (Beyotime) following the manufacturer's protocol. The absorbance was measured at 405 nm, and the relative activity of Caspase 3 was calculated.

Tissue samples were obtained from patients with liver tumors who had a definite pathological diagnosis after surgery at the Shaoxing People's Hospital from January 2013 to February 2018. Informed consent was obtained from patients and the tissue acquisition protocol was approved by the Ethics Committee of Shaoxing People's Hospital. Definite HCC components and ICC components were simultaneously found in the CHC samples by pathological examination. There was no significant difference between the general characteristics of HCC patients and those of CHC patients, including gender and age. Fresh tissues were frozen in liquid nitrogen and used for protein extraction.

Data were presented as means ± SD. Statistical significance between the two groups was determined using the Student's t-test. One-way ANOVA followed by the Tukey-Kramer adjustment was used to examine differences among multiple groups. p < 0.05 was considered to be significant. All statistical analyses were conducted using SPSS 11.0.

The lack of clear apical and lateral membranes and loose or no interactions among cells are the morphological characteristics of EMT [8]. Based on the observed morphological changes described above, the molecular markers for EMT were examined. The epithelial marker E-cadherin was found to be downregulated in HepG2 cells incubated with culture supernatant from ICC cells compared with that incubated with culture supernatant from HCC cells (Fig. 1D). Conversely, mesenchymal-associated proteins Vimentin and Snail were upregulated in HepG2 and SNU-449 cells treated with culture supernatants from ICC cells (Fig. 1D). These results indicate that ICC cells create a microenvironment that induces EMT of HCC cells. 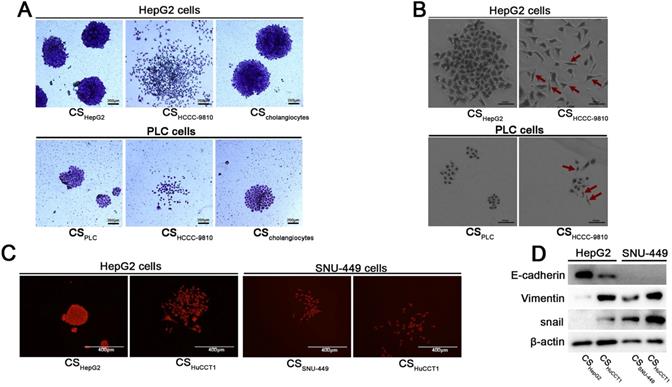 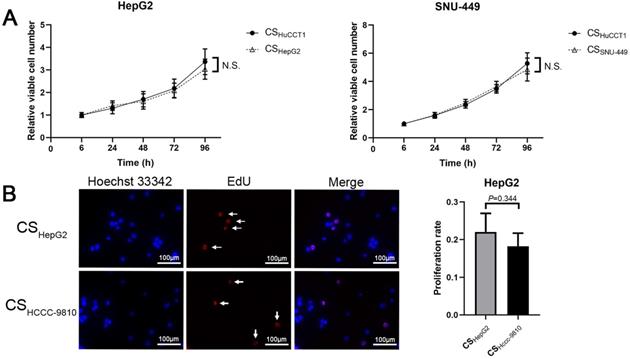 The tumor microenvironment plays a critical role in influencing the biological behavior of cancer cells, including EMT. A previous study reported that HCC cells showed a similar morphological change when treated with laminin-332 [18]. Given that LAMC2 encodes the most important chain of laminin-332 and it has been identified as a poor prognostic marker in some cancers [20, 21], the protein expression levels of LAMC2 in different ICC and HCC cells were evaluated using Western blot analysis. As shown in Fig. 5a, LAMC2 was barely detected in HCC cell lines including HepG2 and SNU-449, but it was highly expressed in ICC HCCC-9810 and HuCCT1 cells (Fig. 5A). 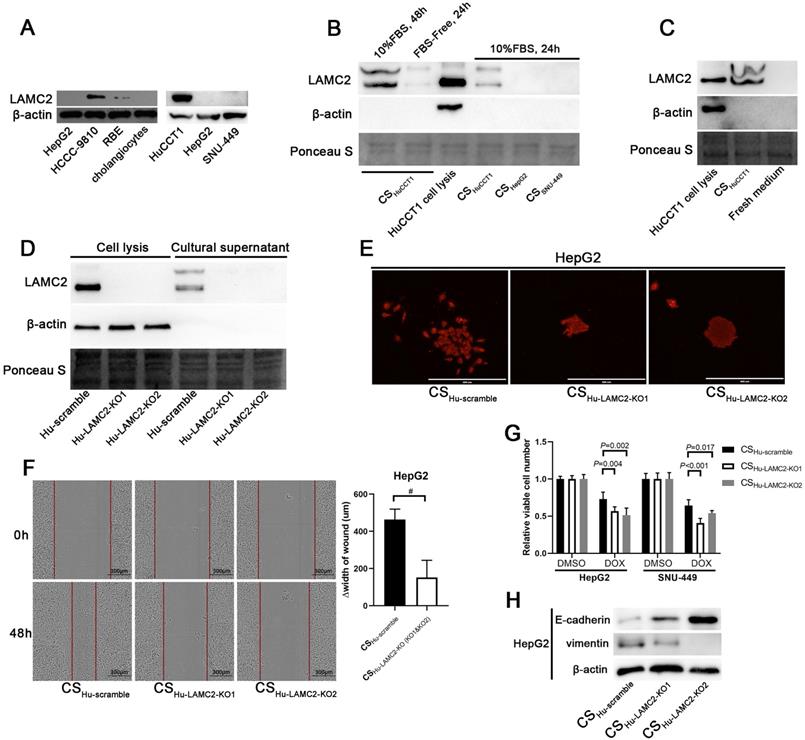 The expression levels of LAMC2 between CHC and HCC tissue samples were compared. Results from Western blot analysis showed that LAMC2 protein levels were significantly higher in CHC samples than those in HCC samples (Fig. 6A). Higher Vimentin and lower E-cadherin expression levels were also found in CHC samples compared to HCC samples. These results demonstrate that the levels of LAMC2 expression are positively associated with the mesenchymal phenotype in clinical CHC samples.

LAMC2 encodes the γ2 chain of laminin-332 and it is an important EMT-associated gene in various human cancers. For example, LAMC2 enhances the metastatic potential of lung adenocarcinoma through inducing EMT [15]. Upregulated LAMC2 expression in prostate cancer cells induces EMT with enhanced migration [16]. In cholangiocarcinoma, aberrant expression of LAMC2 correlates with invasion, metastasis, angiogenesis, and poor prognosis, which are attributed to EMT [31-33]. A recent study has reported that laminin-332 sustains chemoresistance and supports cell 'stemness' in hepatocellular carcinoma [34]. Studies from another report have demonstrated that laminin-332 induces EMT in hepatocellular carcinoma in vitro [18]. Our results showed that the expression level of LAMC2 is higher in ICC cells but undetectable in HCC cells. After examining the level of LAMC2 in different culture supernatants, our studies have shown that LAMC2 is present in the culture supernatants of ICC cells and accumulates over a longer period (Fig. 5B, 24 h vs. 48 h). Furthermore, using a LAMC2 KO cell model, our studies have demonstrated that enhanced EMT of HCC cells induced by culture supernatants from ICC cells is attributed to LAMC2 secreted by those ICC cells. Both CHC and ICC show worse prognoses compared to HCC [1, 35, 36], and the prognosis of CHC is poorer than ICC [1]. A previous study has pointed out that HCC will show aggressive phenotype with shorter recurrence-free and overall survival, once cholangiocarcinoma-like genes are expressed in these HCC cells [36]. Consistent with that study [34], our results suggest that LAMC2 might be a cholangiocarcinoma-like gene causing a poor prognosis in HCC. Furthermore, our results have demonstrated that highly expressed LAMC2 is associated with increased mesenchymal phenotype in clinical CHC samples. These results suggest that promoting EMT of HCC cells by nearby ICC cells may contribute to the worse prognosis of CHC cases.

Collectively, our studies have demonstrated that cholangiocarcinoma cells, via the secretion of LAMC2, promote EMT of hepatocellular carcinoma cells, which may contribute to the poor prognosis of CHC. These findings provide new insight into the interaction of different types of liver cancer cells, which may help us find a new and effective therapy for CHC.

Availability of Data and Material

30. Brozovic A. The relationship between platinum drug resistance and epithelial-mesenchymal transition. Arch Toxicol. 2017;91:605-19