Background: Several revisions of the TNM classifications for colorectal cancer (CRC) have acknowledged that the oncological outcomes of stage IIB/IIC CRC are worse than those of stage IIIA. We aimed to develop a novel TNM (nTNM) classification based on the metro-ticket paradigm.

Methods: We identified eligible CRC patients from the Surveillance, Epidemiology, and End Results database. The nTNM was developed using distance from the origin on a Cartesian plane incorporating the pN (x-axis) and pT (y-axis) stages, and was compared with the AJCC TNM classification. The areas under the curves (AUCs), calibration curves, and Akaike's information criterion (AIC) were used to evaluate the predictive performances of the two classifications. Clinical benefits were further estimated by decision curve analyses. The validation cohort was applied to validate these findings.

Colorectal cancer (CRC) is the third most commonly diagnosed cancer among both males and females in the United States [1]. The American Joint Committee on Cancer (AJCC) tumor-node-metastasis (TNM) staging system is the most widely used prognostic standard for CRC [2], and has been revised several times over the past few decades to improve its prognostic performance and treatment suggestions for patients with CRC. In general, the survival of patients with high-stage cancers should be lower than that of patients with low-stage cancers. However, CRC may be an exception, especially with respect to stage IIB/C (T4N0) and stage IIIA (T1-2N1, T1N2a) tumors, with an apparent survival paradox between these stages. Based on the AJCC 7th and 8th TNM staging systems, data from the Surveillance, Epidemiology, and End Results (SEER) program indicated that the survival of patients with stage IIB/IIC CRC was worse than that of those with stage IIIA [3,4]. Similar results were also reported by the Japan Colon Cancer and Rectal Cancer Society and other research institutes [5-11].

Several recent studies have suggested a 'metro-ticket' paradigm to evaluate survival [12-16]. This paradigm was originally proposed by Mazzaferro et al. for hepatocellular cancer (HCC) and later evolved into a novel predictive tool for HCC patients after liver transplantation [12]. The metro-ticket paradigm was based on the concept that the longer the “trip” (i.e., increased T stage and N stage), the higher the price of the “ticket” (i.e. reduction in expected survival). Further research by Lu et al. showed that application of the metro-ticket system to the TNM staging system for gastric cancer could accurately stratify patients and improve its prognostic performance [15]. However, no studies have yet applied the metro-ticket paradigm to the TNM staging system for CRC.

We aimed to exploit a novel TNM (nTNM) staging system for CRC based on the metro-ticket system, compare the prognostic performances of the nTNM and the AJCC 8th TNM staging systems, and validate these findings in a validation cohort.

Screened colorectal cancer patients from the SEER program from 1973 to 2015. The inclusion criteria were as follows: patients with CRC; provided the complete clinical information; patients were between 18 and 72 years old; first and single cancer; no distant metastasis (M0); performed surgical treatment; no neoadjuvant radiotherapy and chemotherapy were performed; survive more than 1 month; and follow-up at least 5 years or until death. The exclusion criteria were as follows: no complete clinical information; aged< 18 or > 72 years; have other malignant tumors; distant metastasis (M1); no surgical treatment; performed neoadjuvant radiotherapy and chemotherapy; survival time after surgery were less than 1 month; and follow-up time were less than 5 years or lost to follow-up.

Based on the concept of the metro-ticket paradigm for gastric cancer, we proposed the current nTNM classification by combining the pN and pT stages, with preserved definitions of pN and pT stages. The nTNM was defined as the distance from the origin on a Cartesian plane that incorporated two variables: the pN stage (x-axis) and pT stage (y-axis); Pythagoras theorem was then used to calculate the distance of any given point from the origin of the plane (0, 0), where [(nTNM)2 = (pN)2 + (pT)2] (Figure 1A, 1B) [12-16]. The nTNM classification was similar to the AJCC classification and was divided into seven subgroups: I, IIA, IIB, IIC, IIIA, IIIB, and IIIC.

Categorical and continuous variables were described as frequency (%) and median (interquartile range [IQR]), respectively. The characteristics of the baseline clinical variables between the training and validation cohorts were compared with Student's t-test or χ2 test. Five-year overall survival (OS) and estimations of hazard ratios (HRs) were calculated and presented with 95% confidence intervals (CI). The prognostic performance of the nTNM was compared with that of the AJCC 8th TNM classification. The Kaplan-Meier method with log-rank tests was applied. The model discrimination abilities of the nTNM and AJCC TNM staging systems were assessed by areas under the curves (AUCs), and the AUCs were compared by Hanley & McNeil tests. Akaike's information criterion (AIC) was applied to evaluate the model-fitting [17]. Higher AUCs indicated better model discrimination, and lower values of AIC indicated superior model-fitting. Calibration curves were used to determine the agreement between the predicted and observed survival probabilities; in a perfect model, the predictions should fall on the diagonal 45° line of the calibration curve [18]. Clinical benefit was further evaluated by decision curve analysis (DCA) [19].

Based on the inclusion and exclusion criteria, 58,192 patients with non-metastatic CRC were finally included and divided into a training (n = 40,736) and a validation cohort (n = 17,456) using a random sampling method (sampling ratio 7:3). The screening process is shown in Figure 1. In the training cohort, the median number of retrieved lymph nodes was 16.0 (IQR, 30.0-65.0). A total of 16,623 CRC patients had lymph node metastasis, with a median number of positive lymph nodes of 3.0 (IQR, 1.0-5.0). Tumor sizes were recorded for 37,033 patients, with a median of 4.0 cm (IQR, 3.0-6.0 cm). A total of 31,947 (78.4%) patients had colon cancer and 8,789 (21.6%) had rectal cancer. The clinical and pathological characteristics of the validation cohort were similar to those of the training cohort. Table 1 shows the detailed clinical and pathological characteristics of the training and validation cohorts. 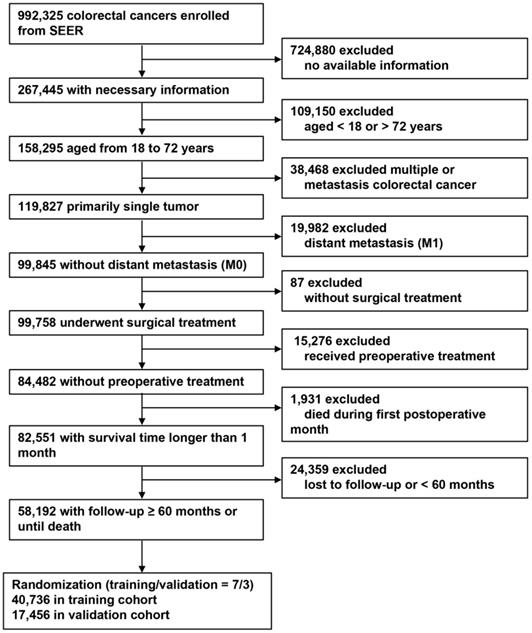 OS based on AJCC TNM and nTNM staging systems

Clinical and pathological characteristics of the training and validation cohorts 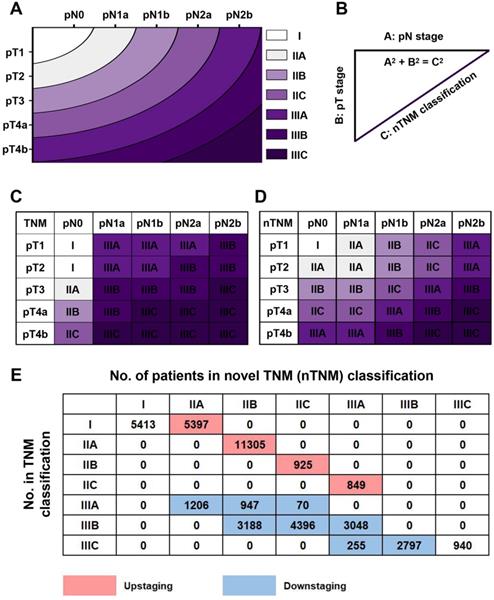 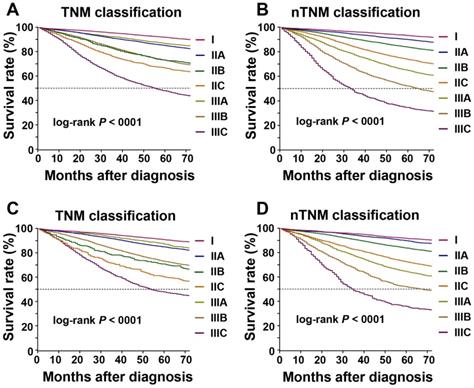 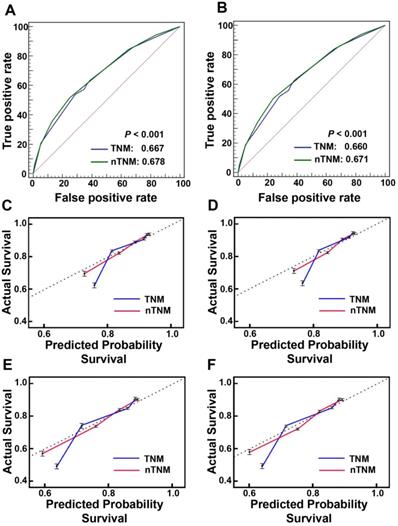 This paradox is widely thought to be caused by the inherent biological invasiveness of stage IIB/C CRC, with various lines of evidence to support this view. Perineural invasion, a high-frequency of microsatellite instability and the tumor's inflammatory reaction can all increase the biological aggressiveness of the tumor. Previous studies showed that stage IIB/C CRC had a higher proportion of perineural invasion, a high frequency of microsatellite instability, and a more prominent protumor inflammatory reaction compared with stage IIIC CRC [9,11]. Previous studies have shown characteristic differences between stages IIB/C and IIIA, with stage IIB/IIC cancers showing faster intestinal wall infiltration and slower lymph node metastasis, and stage IIIA cancers having slower intestinal wall infiltration and earlier lymphatic infiltration [9,11]. This biological difference suggests that early stages do not translate into better oncological outcomes or less recurrence. Some researchers used gene expression profiling to stratify colon cancer according to the risk of recurrence, and indicated that stage IIA/C CRC had poor tumor prognosis and high recurrence rates [25,26]. 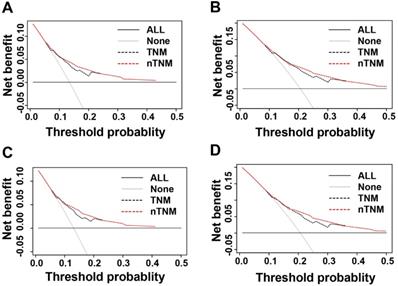 The metro-ticket paradigm was originally used to predict the long-term prognosis of patients undergoing liver transplantation for HCC12, and this prognostic model was shown to accurately stratify the survival of HCC patients. This theory was subsequently applied to patients with CRC liver metastases, thus establishing a novel tumor burden scoring system that could accurately predict patient prognosis after resection in patients with CRC liver metastases14. In another study, Lu et al. developed a new TNM gastric cancer classification based on the same theory and showed that this new system was superior to the AJCC 8th TNM classification for predicting the long-term survival of patients with gastric cancer15. However, no study has yet developed a novel TNM classification for CRC based on the same theory. We therefore modeled pT and pN stages on a Cartesian plane and predicted the survival of CRC patients based on this model. Applying the principle of the metro-ticket paradigm, the weights of the pT and pN stages were considered equally.

The large sample size of this study suggests that the results were reliable. However, the study also had some limitations. First, it was a retrospective study and may therefore have been affected by selection bias and unknown confounding factors. Further prospective studies and other large-scale multicenter data are therefore needed to verify our results. In addition, postoperative adjuvant therapy may affect the prognosis of patients with CRC; however, SEER data lacks information on adjuvant therapy, which may have had an impact on the prognostic ability of the TNM classification.

The authors acknowledge the efforts of the Surveillance, Epidemiology, and End Results (SEER) Program tumor registries for the support (https://seer.cancer.gov/). This research was funded by the China Scholarship Council, grant number 201908050148.

This research was funded by the China Scholarship Council, grant number 201908050148.

The datasets analyzed during this current study are available in SEER database (https://seer.cancer.gov/) to extract the eligible cases. The data are also available from the corresponding author on reasonable request.