Background: Lung cancer is a malignant tumor in mammary gland epithelium with high morbidity and mortality among women worldwide. Long noncoding RNA GAS5 (GAS5) has been proved to be closely related with tumor progression. However, the influence of GAS5 on lung cancer and the specific mechanism remain unclear.

Methods: Cell invasion, cell migration, cell apoptosis and cell cycle were investigated after transfection with pcDNA-GAS5 and sh-GAS5. Sizes of tumors were measured by establishing transplanted tumor model in vivo. E-cadherin and N-cadherin expressions were investigated.

Conclusions: These findings provide novel evidence that GAS5 can be viewed as an anti-lung cancer agent through affecting EMT pathway.

Lung cancer is one of the most common cancers worldwide, and characterized with high mortality. Nowadays, chemotherapy and surgery have been greatly improved, but the 5-year survival rate of lung cancer patients remains very low [1]. Traditional chemoradiotherapy has been widely used for the treatment of lung cancer patients. However, chemoradiotherapy could also kill normal cells. In addition, myelosuppression, gastrointestinal dysfunction, alopecia, and dysfunction of immune system are also common side effects.

LncRNAs are long non-coding single stranded RNAs with more than 200 nucleotides, play various roles in regulating chromatin dynamics, gene expression, growth, differentiation and development [2]. Genome-wide association research on tumor samples have identified a large number of lncRNAs associated with multiple types of cancer [3]. Many lncRNAs rooted in the nucleus where they actively interact with chromatin remodeling complexes to regulate the expression of genes [4, 5]. They may have an impact on cell proliferation and act as an oncogene or putative therapeutic target.

Epithelial-mesenchymal transition (EMT) is a process that epithelial cells acquire mesenchymal features. It was usually observed under physiological conditions such as embryogenesis and wound healing. Meanwhile, it can also be observed in some pathological states including organ fibrosis and cancer genesis. EMT is characterized by the features that epithelial tumor cells lose their epithelial phenotype and obtain the ability to migrate and promote metastasis [12]. EMT could accelerate metastasis, and cells with different EMT levels present different metastatic properties [13, 14], and the specific mechanism needs to be elucidated.

It has been increasingly recognized that drug resistance is frequently accompanied with EMT in various cancers, including pancreatic cancer [15], lung cancer [16] and bladder cancer [17]. In this study, we aimed to clarify the correlation between GAS5 and lung cancer cells. Meanwhile, the potential role of GAS5 as an anti-cancer agent could be concluded in this study.

Human lung cancer cell line H-460, H-129 and A-549 were used in this study. All cells were cultured with DMEM medium containing 10% fetal bovine serum (FBS, #16140071, Hyclone) and 1% penicillin-streptomycin in a cell incubator at 37 °C 5% CO2. 0.25% trypsin-EDTA was added to digest cells. All experimental cells were in the logarithmic growth phase.

The cells were seeded into 6-well plates and transfected with sh-GAS5 or GAS5 overexpression vectors (pcDNA3.1-GAS5), respectively. sh-GAS5 interference fragment (20 μM, 5 μL) or recombinant plasmid pcDNA3.1-GAS5 (4 μg) was diluted in 100 μl serum-free medium. 10 μL Lipofectamine 2000 (#11668019, Invitrogen) was diluted in 100 μl serum-free medium, and the diluted interfering fragments or plasmids were mixed with diluted transfection reagent and incubated for 20 min at room temperature. The transfection mixture was slowly added to the plate containing 2.0 mL serum-free medium per well and replaced with complete medium containing 10% fetal bovine serum. Details about culturing and selecting the silencing GAS5 expression cell lines were described previously [18].

Cells were digested with trypsin at logarithmic growth stage. The cells were prepared into single-cell suspension and seeded into a 6-well plate. When cell confluence reached about 80%, a wound was drawn with a pipette tip. The width of each cell wound was observed after 48 h.

Digested cells were seeded on the top chamber of the Transwell plates. 100 μL cell suspension was added to the upper chamber, and DMEM medium containing 10% FBS was added to the lower chamber. After culturing for 24 h at 37 °C and 5% CO2, cells were fixed with 4% polymethanol, and stained with Giemsa. The number of cells passed through was observed and photographed under high magnification microscope.

Flow cytometry was conducted as described previously [19]. Cells were prepared into 6-well plates and cultured in an incubator overnight. Cells were digested, and centrifuged at 500×g to collect the cell pellet. Then, cells were treated with Annexin V-FITC and propidium iodide (PI) (#40302ES20, Yeasen Biotech Co., Ltd., China). After incubation for 15 min at room temperature in the dark, apoptosis was analyzed through flow cytometry.

Cells was subjected to extract total RNA using TRIzol Reagent (#15596026, Thermo Fisher) according to the manufacturer's protocol. Proteinase K and RNase free DNase I was used to remove any residual protein or DNA. The purity of the RNA was measured using NanoDrop 8000 (Thermo) by detecting the OD 260 nm/280 nm value. The OD 260 nm/280 nm value was 1.96.

After sacrificing mice, tumors were harvested and the weight was measured. Then tumor tissues were immersed using neutral formalin for fixation for 24 h. All tumor tissues and one lung tissue in each group were paraffin-embedded, 4 μm thickness continuous sections were made. Gradient dehydration with xylene and alcohol, hematoxylin staining, 1% hydrochloric acid alcohol differentiation, warm water cyanidation, eosin restaining, dehydration, transparent and neutral gum sealing tablets, specific experimental steps are conducted [10]. For immunohistochemistry analysis, the corresponding primary antibody was used to incubate with the sectioned tissue. The antibody details were listed as follows: anti-E-cadherin (#ab40772, abcam), anti-N-cadherin (#ab76011, abcam).

Female nude mice (C57BL/6, 5-weeks old) were purchased from Beijing Vital River Laboratory Animal Technology (Beijing, China). The animal experiments were approved by the Institutional Animal Care of Fujian Provincial Hospital (Approval number: #2020018). GAS5 gene silence cells (sh-GAS5 group) and overexpression cells (pcDNA3.1 GAS5) were inoculated into the right side of the pad, PBS group was used as blank control group, and each group included 4 mice. When the tumor grew to around 7 mm×7 mm×7 mm, mice were anesthetized with ketamine, and sacrificed by neck amputation. Tumors were harvested to measure the size and weight of the tumor was analyzed by subsequent immunohistochemistry.

Effect of GAS5 on chemotherapy sensitivity of lung cancer cells

Three common chemotherapy drugs (fluorouracial, doxorubicin, and cisplatin) were used. Overexpression or knockdown of GAS in H-460 cells were established as described above. Then, cells were treated with different concentrations of fluorouracial (0, 40, 80, and 120 g/mL), doxorubicin (0, 1, 5, and 10 µM), or cisplatin (0, 10, 30, and 50 µM) for 24 h. Then, the cell proliferation was measured using MTT assay.

Data was showed as mean values with standard deviation. Student's t test was used to analyze data between 2 groups. Data among more than 2 groups was analyzed using one-way analysis of variance (ANOVA). P value < 0.05 was considered as statistically significant. All results were achieved by performing at least triple independent experiments.

Expression of GAS5 in vitro and in vivo

To explore the correlation between survival rate and GAS5 expression level, Kmplot database (https://kmplot.com/analysis/) was used. Results indicated that those who highly expressed GAS5 have a 10% higher survival rate (Figure 1A). RT-PCR data suggested that GAS5 expression was reduced about 2-folds in lung cancer tissue than that of the normal group (Figure 1B). Furthermore, GAS5 expression of different lung cancer cell lines (H-460, H-129 and A-549) was evaluated, respectively. Results showed that the expression of GAS5 in H-460 was lower than other two cell types, thus H-460 was selected for subsequent experiments (Figure 1C). Moreover, cell models of GAS5 knockdown (Sh-GAS5) or overexpression (pcDNA-GAS5) was established (Figure 1D). 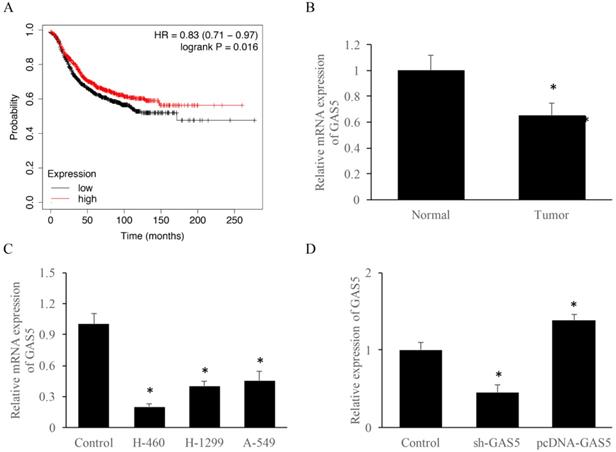 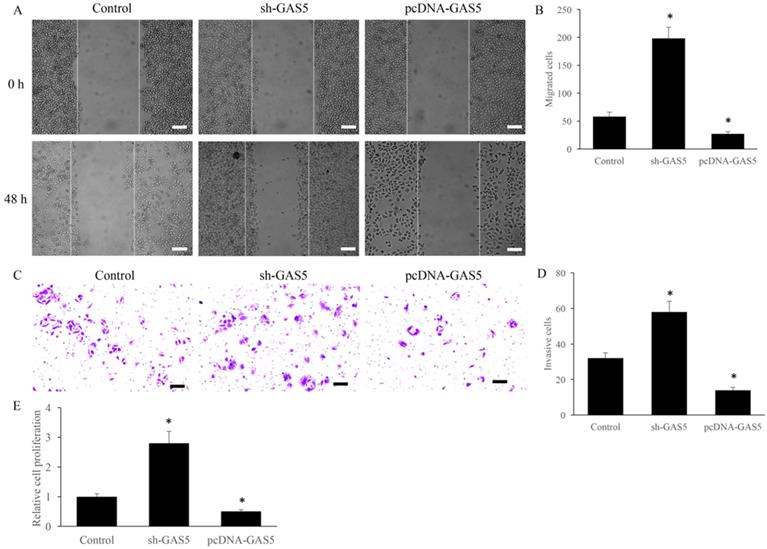 To determine the influence of GAS5 on lung cancer cell apoptosis and cell cycle, cells treated with sh-GAS5 and pcDNA-GAS5 was detected with flow cytometer. Results revealed that sh-GAS5 inhibited cell apoptosis, and pcDNA-GAS5 promoted apoptosis (Figure 3A-B). Cell cycle results indicated total S-phase was 26.16% and G2 phase was 16.18% in the sh-GAS5 group, S-phase and G2 phase in the control group was 32.88% and 8.04%. The percentage of S-phase cells was increased, G2-phase was reduced in overexpressed cell lines. The results proved that GAS5 play a vital role in the cell division, proliferation and survival. 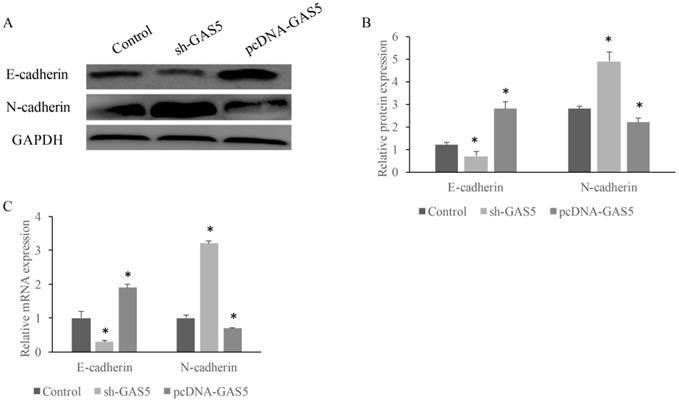 GAS5 markedly inhibited the growth of tumor in mice and induced EMT pathway. (A) Immunohistochemistry staining about E-cadherin and N-cadherin expression among sh-GAS5 and pcDNA-GAS5 cell lines, scale bar: 40 µm; (B) representative pictures of tumor among sh-GAS5 and pcDNA-GAS5 cell lines; (C) measurement of tumor weight. * P<0.05 compared with group Control. Four mice each group were used in this animal experiment. The results were achieved by conducting at least 3 independent experiments. 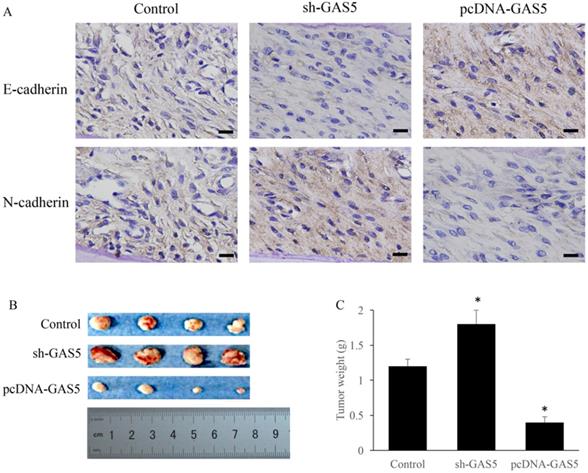 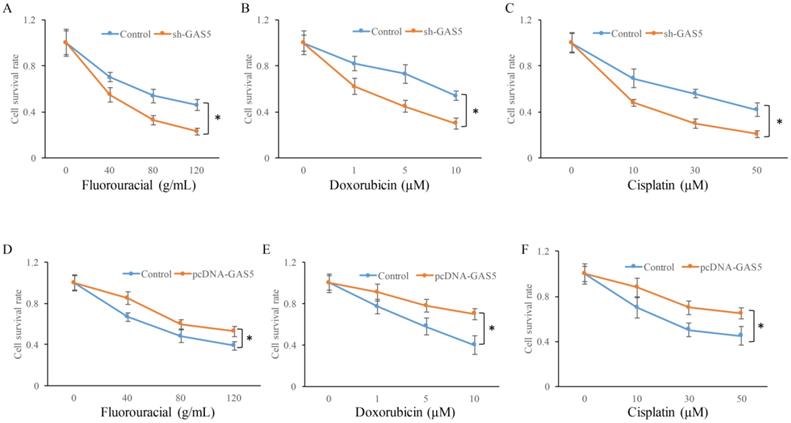 Hypoxia inducible factor caused Ephrin-A3 to gather on the cell surface by increasing the expression of lncRNA EFNA3 [21], which induced tumor cells infiltration into surrounding tissues from blood vessels, thus promoting the invasion and metastasis of cancer cells. LncRNA can also act as a tumor suppressor to regulate the invasion and metastasis of cancer. Liu et al confirmed that lncRNA NKILA was related to the NF-KB pathway and could be up-regulated by the inflammatory factors [22]. In this study, GAS5 significantly inhibited cell migration and invasion. In vivo study showed that cancer proliferation was restricted and narrowed in size. More mechanism pathways should be explored about the roles of lncRNAs in cancer.

EMT refers to the biological process in which epithelial cells are transformed into mesenchymal phenotypic cells through specific procedures, and plays an important role in the process of cancer metastasis. Hu et al. used lncRNA chips to analyze the EMT process of cancer cells, and found that there were over 99 lncRNAs involved in the process, among which 4l played an important role in WNT signaling pathway by regulating target genes [23]. Hou et al. [24] found that EMT could also be detected if lncRNA ROR was up-regulated. LncRNA ROR prevented ZEB2 from degradation, induced EMT expression, and thus promoted cell invasion and metastasis. Furthermore, in vivo studies confirmed that lncRNA-ROR could inhibit the growth of cancer cells and lung metastasis. Matouk et al. found that EMT were activated during the overexpression of lncRNA H19, which formed a positive feedback loop to promote the infiltration and metastasis of cancer [25]. In addition, a large number of studies have found that lncRNA could also regulate the EMT process of cancer through its role in related signaling pathways.

Here, it is proved that GAS5 was closely related to cell apoptosis, and its down-regulated expression in cancer tissues predicts poor prognosis of lung cancer patients. Therefore, the transcription level of GAS5 can be regulated through the application of new targeted drugs or combination therapy to improve the prognosis of lung cancer patients. The study shed light on GAS5 as a novel therapeutic strategy.

In summary, this study has proved that GAS5 was closely related to epigenetic regulation of lung cancer. GAS5 could influence invasion and metastasis of lung cancer through EMT process, which shed light on the prospect for development as a therapeutic target for lung cancer.