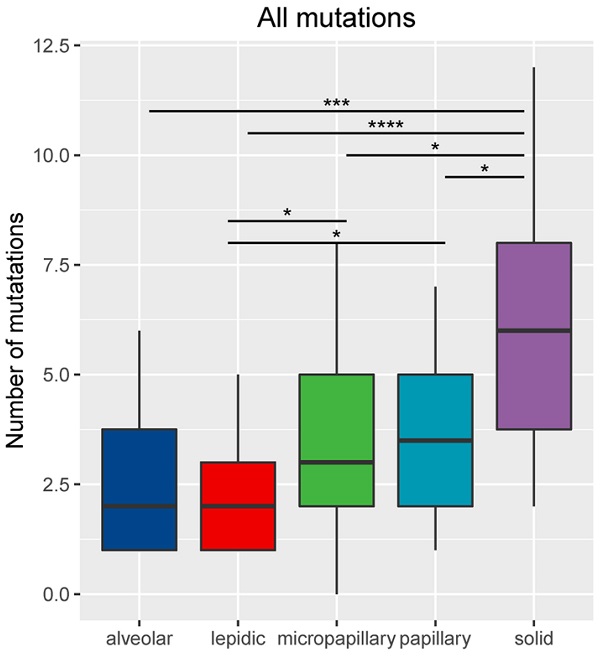 Patients and Methods: We performed next-generation sequencing (NGS) in a cohort of 86 stage I invasive adenocarcinoma (IAC) patients, using a customized panel including 168 cancer-associated genes.

Driver mutations occurred in 96.55% (83/86) of all patients. EGFR (73.3%), KRAS (9.3%), ALK (4.7%) and MET (4.7%) are the most commonly mutated lung cancer driver genes, TP53 is the top mutated tumor suppressor gene. SPA patients harbored more driver mutations and higher frequency of TP53 than LPA patients. Interestingly, LRP1B mutations, which has been reported to be associated with high tumor mutation burden and better response to immunotherapy, were only detected from 5 SPA patients (p=0.001). No patients from other four cohorts harbored LRP1B mutations.

LADC is a heterogeneous tumor, accounting for almost half of all lung cancers. In 2011, the International Association for the Study of Lung Cancer, the American Thoracic Society, and the European Respiratory Society (IASLC/ATS/ERS) proposed a new histologic subtyping system for LADC. IAC was further classified into five major histologic subtypes: LPA, APA, PPA, MPA and SPA [1]. The recently updated 2015 World Health Organization (WHO) classification of lung tumor is generally consistent with the 2011 IALSC/ATS/ERS classification [2]. Studies have well demonstrated that there is an association between IAC subtypes and survival [3-5]. Lepidic-predominant subtype was significantly related to the absence of lymph node metastasis [6] and associated with the most favorable prognostic outcome. Micropapillary and solid predominant subtypes were predictors of increased frequency of lymph node metastasis [7-10] and significantly related to disease recurrence and death [11-17]. Acinar and papillary predominant subtypes had an intermediate prognosis.

Histological subtypes correlate with molecular changes. Numerous studies have evaluated the association between EGFR/KRAS/ALK mutation status and histological subtype. EGFR mutations more commonly occurred in the papillary and micropapillary subtype [18-20], and less commonly occurred in the solid subtype [21]. KRAS mutations and ALK rearrangements were associated with the solid predominant subtype [21, 22].

However, previous studies have focused on several common driver genes, the mutational profiles of predominant histological subtypes have not been well defined. In this study, we aimed to reveal the genomic landscape of the 5 main histological subtypes by targeting 168 cancer-related genes.

86 patients diagnosed with pathologic stage I (T1-2aN0M0) invasive lung adenocarcinoma were enrolled between January 2015 and December 2018. No patients had received any preoperative chemotherapy or radiotherapy. Tumor staging was performed according to the 8th edition of the TNM classification of the international association for the study of lung cancer (IASLC).

For each patient, surgically resected tumor was obtained immediately post-surgery. Hematoxylin-eosin (H&E) staining was performed on the tissue obtained. Two pathologists estimated and marked the predominant pattern for each tissue sample, according to the 2015 WHO criteria. The predominant pattern was defined as the pattern that occupied most of the tumor, because of small sample size, MPA was defined as an adenocarcinoma with micropapillary component exceeded 10% of the entire tumor area. The number of each subtypes were as follows: LPA (n=20), APA (n=18), PPA (n=16), SPA (n=16) and MPA (n=16). This study was approved by the Review Broad of the Third Affiliated Hospital of Soochow University.

PD-L1 expression of tumor cells of each sample were determined by IHC using the PD-L1 specific DAKO 22C3 antibody, and was evaluated by a tumor proportion score (TPS). The specimens were considered PD-L1+ (TPS ≥1%) and high PD-L1+ (TPS ≥50%).

Sequence data were mapped to the reference human genome (hg19) using Burrows-Wheeler Aligner v.0.7.10 [23]. Local alignment optimization, duplication marking and variant calling were performed using Genome Analysis Tool Kit v.3.2 [24], and VarScan v.2.4.3 [25]. Variants were filtered using the VarScan fpfilter pipeline, loci with depth less than 100 were filtered out. Base-calling in tissue samples required at least 8 supporting reads for single nucleotide variations (SNV) and 5 supporting reads for insertion-deletion variations (INDEL). Variants with population frequency over 0.1% in the ExAC, 1000 Genomes, dbSNP or ESP6500SI-V2 databases were grouped as single nucleotide polymorphisms (SNP) and excluded from further analysis. Remaining variants were annotated with ANNOVAR (2016-02-01 release) [26] and SnpEff v.3.6 [27]. Analysis of DNA translocation was performed using Factera v.1.4.3 [28]. Copy number variations (CNV) were analyzed based on the depth of coverage data of capture intervals. Coverage data were corrected against sequencing bias resulting from GC content and probe design. The average coverage of all captured regions was used to normalize the coverage of different samples to comparable scales. Copy number was calculated based on the ratio between the depth of coverage in tumor samples and average coverage of an adequate number (n>50) of samples without CNV as references per capture interval. CNV is called if the coverage data of the gene region was quantitatively and statistically significant from its reference control. The limit of detection for CNVs is 1.5 and 2.64 for deletions and amplifications, respectively.

The Kaplan-Meier method was used for survival rate estimation. The log-rank test was used for the comparison of survival curves between three groups. All statistical analysis was performed using R. All tests were two-sided and had a significance level of 0.05. 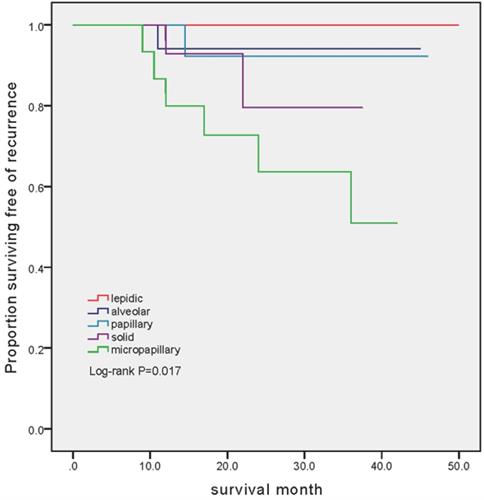 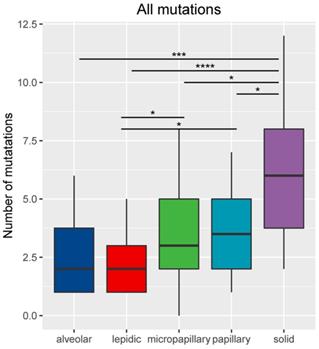 TP53 and other mutations 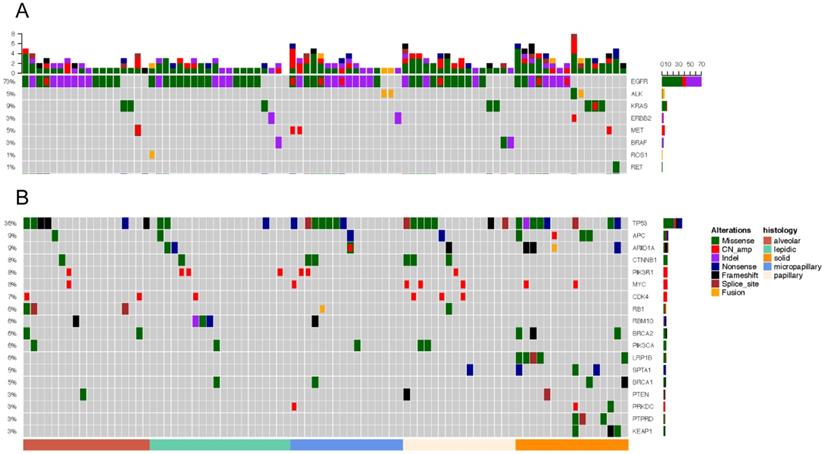 In our study, distinct driver gene mutations were detected in different subtypes. EGFR was the most frequently shared mutated driver gene 73.3% (63/86), which is higher than 40%-50% of whole LADC population. Consistent with previous reports, we found that EGFR mutations were more frequent in MPA, less common in SPA. ALK mutations were only detected in MPA and SPA. In general, EGFR was an important factor in the beginning of lung cancer and then play a decreased role in developed lung cancer and ALK fusions may occur at a later stage in the progression of lung cancer. In addition, we observed that from LPA to SPA, the frequency of TP53 mutations significantly increased. Previous work revealed that TP53 was relatively later molecular event as a key mediator in the invasiveness of lung cancer [41, 42].

Z-Y. Dong et al. found that SPA subtype harbored a notable increase of nonsynonymous mutation and higher rate of transversion/transition based on The Cancer Genome Atlas (TCGA) and Broad database [43]. We also found that even in stageⅠdiseases, SPA had more complex driver gene mutations, higher total number of mutations and more private genes. Notably, LRP1B mutation frequency was 5% (5/100) in the entire cohort, 25% (5/20) were found in SPA, and none in other four subtypes. Li Ding et al. [44] found that mutations in LRP1B was negatively correlated with acinar, papillary and bronchioloalveolar carcinoma (BAC) subtypes and positively correlated with solid subtype. LRP1B mutations, as an important cancer suppressor gene [45], are correlated with higher-TMB and neoantigen burden. Meanwhile, mutation in LRP1B were identified to be associated with better immunotherapy survival outcome in non-small cell lung cancer (NSCLC) and melanoma patients. In LRP1B mutant samples, tumor-infiltrating immune cells were more abundant, which indicated a preferable immune response status [46-48]. Furthermore, PD-L1, as an immunotherapy biomarker, was significantly correlated with higher histologic grades (micropapillary and solid subtypes), compared to mediate histologic grades (acinar and papillary subtypes) and low grades (lepidic subtypes) [49-52]. In our study, the incidences of PD-L1+ and high PD-L1+ lesions were significantly higher in solid subtypes. These findings suggest that SPA patients - especially those harboring LRP1B mutations, may benefit from immunotherapy.

Even with the same TNM stage, our study revealed the distinct mutational profile in different histological subtypes. The intrinsic mutation may determine the malignant grade of various lung adenocarcinoma subtypes. It is estimated that over 50% of patients with early-stage NSCLC will suffered recurrence after surgery [53]. Among patients with lung adenocarcinoma, outcomes after surgical resection vary according to predominant histologic subtype. Many studies have reported that the presence of micropapillary and solid subtypes (predominant or even minor component) has significant prognostic value. Micropapillary and solid subtypes were associated with worse disease-free survival (DFS) and overall survival (OS) [3-5, 11, 54], higher possibility of lymph node metastasis [7-10, 55] and recurrence [13, 15, 31, 56]. The recurrence hazard increased as a function of the percentage of micropapillary and solid pattern [56], while higher percentage of lepidic component was associated with a lower risk for recurrence [57, 58]. Among patients who recurred, solid predominant tumors had earlier, more extra-thoracic, more multisite recurrences and worse postrecurrence survival (PRS) than those with non-solid tumors [12]. In our study, SPA and MPA have higher risk of recurrence compared to those with PPA, APA and LPA (P=0.017).

Recently, the architectural classification of IAC with surgical resection has got more and more attention in clinical practice. Ming-Sound Tsao etc. [59, 60] analysed 575 patients with completely resected lung adenocarcinoma from the LACE-Bio study, and showed the first evidence that micropapillary/solid-predominant histology predict survival benefit from adjuvant chemotherapy in patients with early-stage disease. Shinsuke Sasada [61] revealed that postoperative adjuvant chemotherapy could be considered for non-lepidic predominant tumors even at stage IA. Clinically, stage I IAC patients, which are often underwent uniform treatment and follow-up, might need distinctive therapeutic care based on the histological subtypes with divergent molecular basis.

Our study has several limitations. Firstly, tumor subtypes were extracted from different patients, as they didn't share identical genetic background and relative exposure history, we were unable to detect evolutionary trajectories of the five subtypes. Secondly, the median follow-up time was relatively short, we can't fully investigate the relationship between histologic subtypes, molecular subtypes and clinical efficacy of different treatment protocols. Thirdly, due to the small size of sample with micropapillary occupied most of the area, we selected tumors with micropapillary component exceeded 10% of the entire tumor area as MPA. The genetic mutation profile of MPA may be affected by sample selection.

In summary, in resected stage I IAC, prognoses of solid or micropapillary predominant subtypes were apparently worse than that of other subtypes, different histological subtypes had distinct mutational profiles. SPA harbored more complex mutation profile even at stage I and higher mutation rate of LRP1B. The rates for PD-L1 positivity and high TPS were significantly higher in SPA. Clinically, SPA patients may benefit from immunotherapy. Stage I IAC patients, which are often underwent undifferentiated treatment and follow-up, might need distinctive therapeutic care based on the histological subtypes with unique genetic profiles.

This study was approved by the Review Broad of the Third Affiliated Hospital of Soochow University. Our research involved human participants.