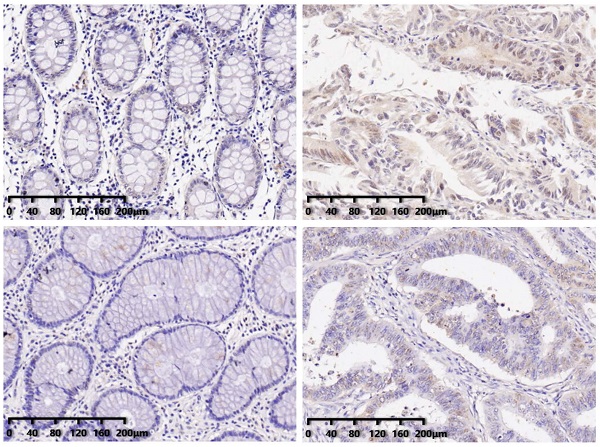 Zinc finger proteins (ZNFs) are a class of protein containing zinc finger domains, and they play an important role in tumor progression. However, as a member of the ZNFs family, the effect of ZNF460 in colon cancer remains unclear. In this study, we found that the expression of ZNF460 protein were markedly increased in clinical colon cancer tissues compared with para-cancer non-cancerous tissues by tissue immunohistochemistry (IHC) and western blot (WB). We also confirmed this result at the mRNA and protein levels of ZNF460 through bioinformatics analysis. In addition, high expression of ZNF460 was correlated with increased depth of invasion (P<0.05), increased lymph node metastasis (P<0.05), distant metastasis (P<0.05) and high blood serum CA19-9 level (P<0.05). High expression of ZNF460 predicted poor overall survival (OS) and recurrence free survival (RFS) in patients with colon cancer. Moreover, multivariate analyses revealed that ZNF460 was an independent prognostic factor in both OS (hazard ratio [HR]: 1.636; 95% confidence interval [CI], 1.028-2.603; P = 0.038) and RFS (HR: 2.215; 95% CI: 1.227-3.997; P = 0.008). The knockdown of ZNF460 suppressed the invasion and metastasis of colon cancer cells in vitro. Mechanistically, we revealed that ZNF460 promotes the activation of the JAK2/STAT3 signaling pathway in colon cancer cells. Taken together, overexpression of ZNF460 predicted worse survival and promoted metastasis through JAK2/STAT3 signaling pathway in patient with colon cancer, and could be a novel therapeutic target in colon cancer.

Colon cancer is one of the most common types of malignant tumors and ranks fourth in terms of incidence and fifth in terms of mortality worldwide. It is the second most common malignant tumor diagnosed in women and third most in men. The highest colon cancer incidence rates are found in parts of Europe and Australia/New Zealand [1, 2]. Currently, surgery is still the most potent curative method for colon cancer [3, 4]. But metastasis and recurrence rates after radical resection of colon cancer remained high [5]. Furthermore, some colon cancer patients were diagnosed at advanced stages with distant metastasis, which meant missing the window of surgery, thus was associated with shorter survival time and poorer prognosis [6, 7]. However, the underlying mechanisms of colon cancer metastasis remain unclear [8]. Thus, it is important to investigate the molecular mechanisms involved in colon cancer progression and metastasis.

Zinc finger proteins (ZNFs) are a group of proteins containing zinc finger domains. ZNFs have a wide range of molecular functions and were encoded by 2% of all human genes [9]. The Zinc finger structure of protein can bind with gene promoter region and plays an important role in regulating cell proliferation, differentiation, apoptosis and so on [10]. ZNFs play an important role in cancer progression or tumor suppression. Previous study has revealed that ZNF306 [11], ZNF304 [12], and ZEB1 [13] contribute to tumorigenesis in colorectal cancer, but ZNF545, as a tumor suppressor, inhibits colon cancer progression [14]. ZNF460 as a C2H2-type ZNF, encoding a 562-amino-acid polypeptide, was first identified in 2003 but its function in colon cancer was still unclear [15].

Surgically treated colon cancer patients (n=262) with confirmed pathology without neoadjuvant chemotherapy at the First Affiliated Hospital of Sun Yat-sen University between 2008 and 2011 were randomly chosen. TNM staging was performed according to the 8th edition of American Joint Committee on Cancer Staging Manual. This study was performed according to the Declaration of Helsinki. Research ethics were approved by the ethical committee of the Seventh Affiliated Hospital of Sun Yat-sen University and the samples were obtained with informed consent.

The human colon cancer cell lines SW480, LoVo, DLD-1 and HCT-116 were purchased from the Shanghai Institute of Cell Biology, China. The LS174T cell line was purchased from the ATCC. These cells were cultured in RPMI-1640 medium supplemented with 10% fetal bovine serum (Hyclone, Logan, UT, USA) and antibiotics at 37 °C with 5% CO2. Colon cancer cells were transfected with either siZNF460 or empty vector siRNA (Ribo, China) using a riboFETCTM CP transfection reagent (Ribo, China) according to the manufacturer's instructions. The siRNA-transfected colon cancer cells were cultivated at 37 °C for 48 hours. The transfected cells were divided into three experimental groups: Control, NC-siRNA, ZNF460siRNA. After 48 hours, the transfected cells were collected for protein expression analysis. The siRNA sequence is listed as follows: ZNF460siRNA#1: 5′-GCACAGATCTCATTCAAC-3′; ZNF460siRNA#2: 5′-GTCCCAAGATACTCCTATT-3′; ZNF460siRNA#3: 5′- GCCTTCAATTGCCGCTCAT-3′.

Paraffin-embedded colon cancer specimens were obtained from the Department of Pathology of First Affiliated Hospital of Sun Yat-sen University. IHC staining were conducted using an anti-ZNF460 antibody (1:200; Sigma-Aldrich, Darmstadt, Germany). Immunoreactivity scores were evaluation by two independent investigators who were blinded to the clinical data of the study and used semiquantitative method to evaluated the scoring. A final agreement between them was obtained for each score, even for discrepant immunostaining results. Histochemistry score (H-SCORE) scoring method was adopted [16]. H-SCORE is a scoring method for tissue immunohistochemical results that reflects the positive ratio and the positive intensity. The following formula was used: H-SCORE=∑ (PI × I) = (percentage of cells of weak intensity ×1) + (percentage of cells of moderate intensity ×2) + (percentage of cells of strong intensity ×3). In the formula, PI represents the percentage of positive cells to the total number of cells in this position and I represent the intensity of staining. I=0: blue staining, I=1: light yellow staining, I=2: brown staining and I=3: dark brown staining. The H-SCORE is 0-300, with a higher score representing stronger positive staining.

For the migration assay, 5×104 LoVo cells and 1×105 LS174T cells were resuspended in serum-free medium and placed in the upper chambers. For the invasion assays, 1×105 LoVo cells and 2×105 LS174T cells were seeded in a Matrigel-coated chamber (BD Biosciences, Bedford, MA, USA). After 36h (to examine migration) or 48h (to examine invasion) of incubation, the non-migrated cells on the upper surface of the membrane were removed, and the cells on the lower surface were fixed and stained with 0.1% crystal violet. The cells in five random microscopic fields were counted and imaged using a light microscope with Leica Microsystems DM4B.

χ2 test, Wilcoxon test and t test was applied for the continuous and discrete data analysis. The associations between ZNF460 expression and overall patient survival were estimated using univariate analysis and the Kaplan-Meier method and further assessed using the log-rank test. Potential prognosis and clinicopathological characteristics were adjusted for using Cox regression models of multivariate analysis, with ZNF460 expression fitted as an indicator variable. All statistical analyses were conducted using the SPSS statistical software (version 22.0; SPSS Inc., Chicago, IL) and GraphPad Prism (version 8.0). All statistical tests were two-sided, and values of p < 0.05 were considered statistically significant.

To further examine the ZNF460 expression and its clinicopathological characteristics in colon cancer, we performed IHC staining in 214 paraffin-embedded colon cancer specimens. The ZNF460 protein was mainly expressed in the cytoplasm and nucleus based on IHC results. The patients were divided into high expression group and low expression group with median (H score = 95) as the cut-off value. The associations of ZNF460 expression with clinical parameters were summarized in Table 1. As shown in the table, ZNF460 expression level was significantly associated with the increased depth of invasion (P<0.05), increased lymph node metastasis (P<0.05), distant metastasis (P<0.05), high CA19-9 level (U/ml) (P<0.05) and TNM stage (P<0.05). These results indicated that the high expression of ZNF460 may be related to the metastasis of colon cancer. 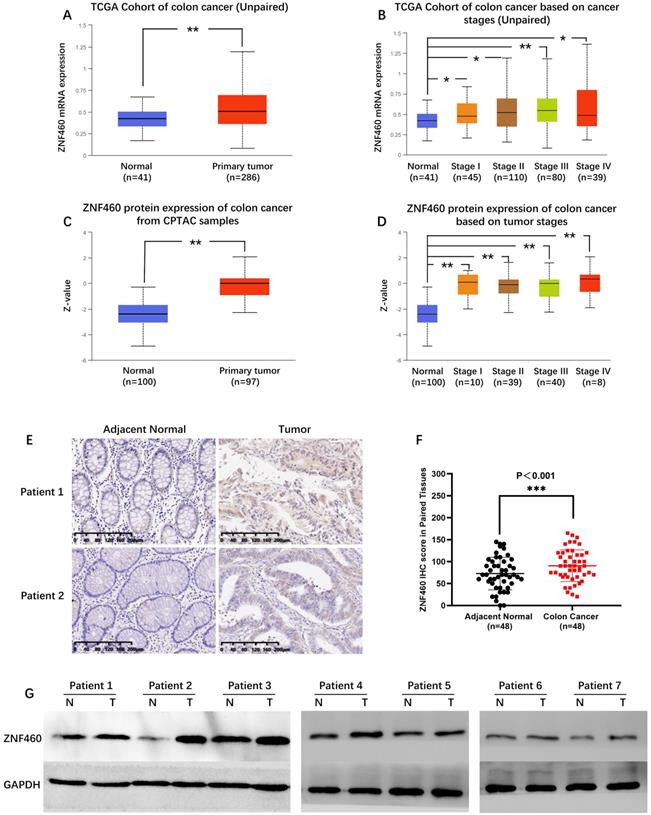 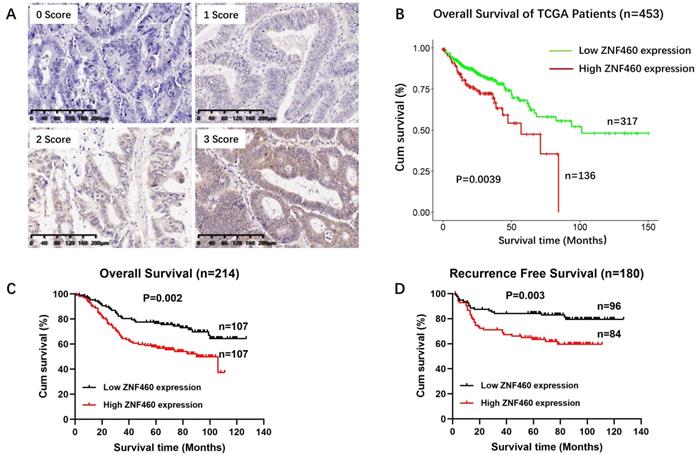 We also performed univariate and multivariate analyses of various clinical data to assess the prognostic factor. As shown in Tables 2 & 3, there are various parameters associated with OS and RFS in colon cancer. Further Cox proportional-hazards regression analysis showed that ZNF460 expression was an independent prognostic factor for OS (Table 2; HR=1.636, 95% CI: 1.028-2.603; P = 0.038) and RFS (Table 3; HR: 2.215; 95% CI: 1.227-3.997; P = 0.008). Taken together, the data indicated that ZNF460 high expression predicted a worse survival and was an independent prognostic factor for the patients with colon cancer. 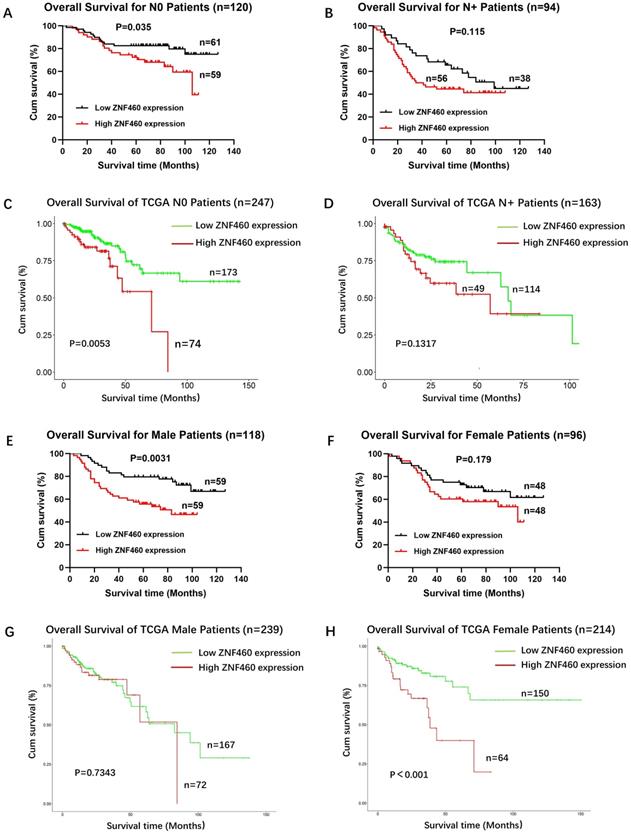 To further investigate the functions of ZNF460 in colon cancer cell invasion and migration, we first use WB analyses of ZNF460 expression in the indicated colon cancer cell lines. The results exhibited relatively high expression of ZNF460 among LS174T and LoVo cells (Fig. 4A). Then we manipulated the ZNF460 levels by transfecting ZNF460 siRNA and empty vector siRNA into LS174T (Fig. 4B) and LoVo (Fig. 4C) cells. Finally, we found that ZNF460-siRNA#1 had the best knockdown effect, which were shown in Fig. 4B and 4C. We found that cells with knockdown of ZNF460 displayed a significant decrease in cell migration and invasion abilities compared to cells transfected with the vector control (Fig. 4D).

To further explore the mechanism of ZNF460 in promoting the invasion and metastasis of colon cancer, LinkedOmics was used to examine ZNF460 co-expression genes in colon cancer cohort. The top 50 significant genes positively and negatively correlated with ZNF460 were shown in the heatmap (Figure 5A, B). The gene with the strongest positive correlation with the expression of ZNF460 was ZNF484, and the strongest negative correlation was MGAT4B. 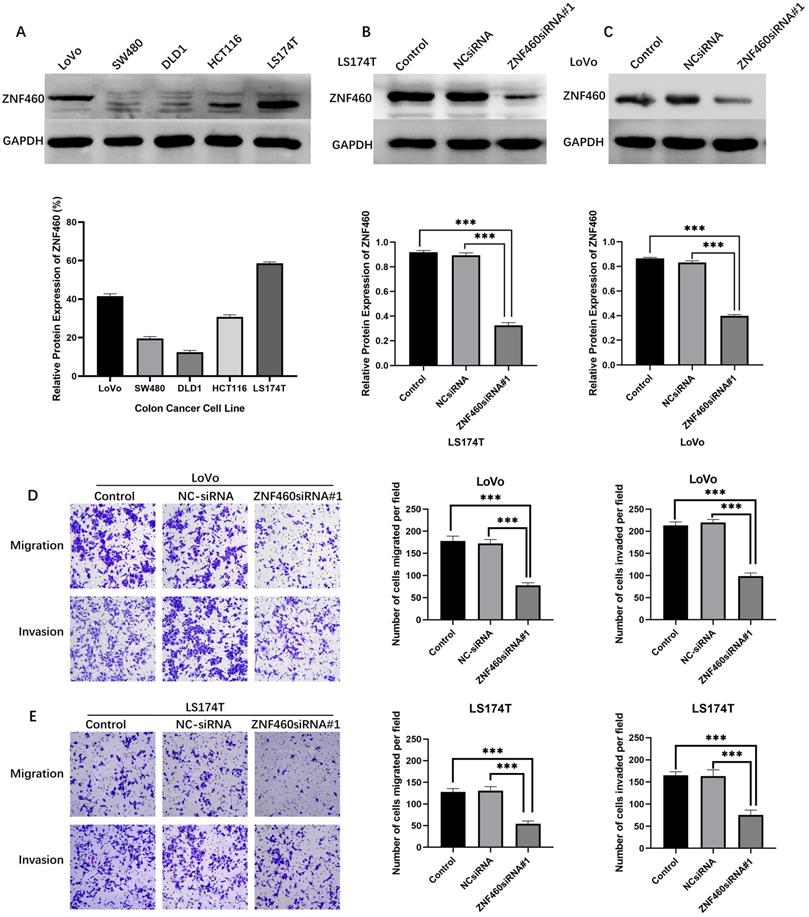 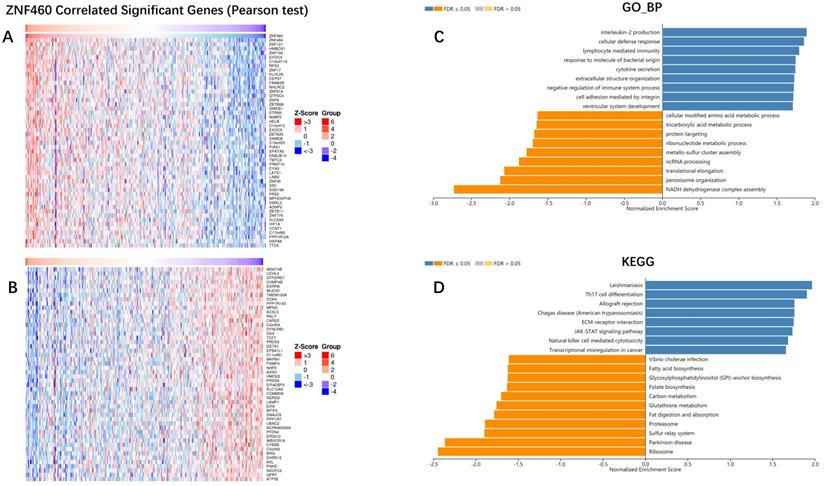 According to the results of bioinformatics analysis, ZNF460 may promote the metastasis of colon cancer by activating the JAK/STAT signaling pathway. To further elucidate the mechanism, western blot was utilized to detect protein expression of p-JAK2, JAK2, p-STAT3 and STAT3 in colon cancer cells after transfection with ZNF460 siRNA. The results showed that downregulation of ZNF460 expression significantly decreased the p-JAK2 and p-STAT3 expression levels in colon cancer cells (Figure 6). This result showed that ZNF460 promotes metastasis through JAK2/STAT3 signaling pathway. 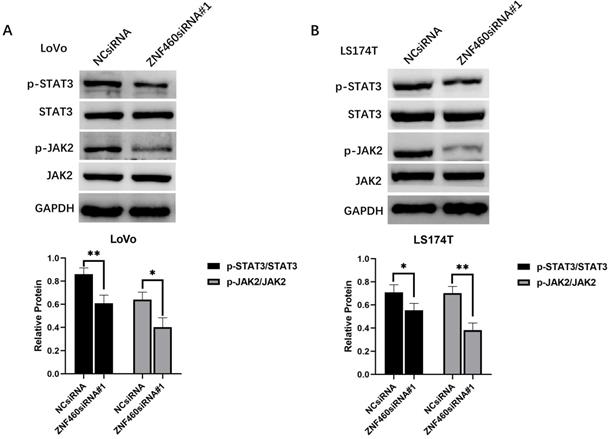 ZNF460 contains a KRAB A+B box and eleven C2H2 type zinc finger motifs which was first described in 2003 [15]. Previous studies had demonstrated that ZNFs could recruit different chromatin modifiers and served diverse regulation mechanisms. For example, ZNFs could recruit co-repressors and play a role of transcriptional repressor [19]. On the other hand, it could work as transcriptional activators by interacting with co-activators, including CBP/p300 and C/EBP [20]. However, the expression of ZNF460 in colon cancer and its function in the process of colon cancer invasion and metastasis remained unclear. In this study, we first showed that ZNF460 was overexpressed in colon cancer specimens, was significantly correlated with poor survival, and promoted the invasion and metastasis of colon cancer. Multivariate Cox regression analysis demonstrated ZNF460 expression to be an independent prognostic factor for OS and RFS in colon cancer patients. Mechanistically, we revealed that ZNF460 promotes metastasis through JAK2/STAT3 signaling pathway in colon cancer cells. These results confirmed that ZNF460 was a potential prognostic biomarker and therapeutic target in patients with colon cancer.

Previous studies had reported that several ZNFs were associated with tumor prognosis. To be exact, the zinc finger and BTB domain-containing 7C (ZBTB7C) had been reported to be downregulated in colorectal cancer and could act as an independent prognostic factor [21]. The Zinc-fingers and homeoboxes 3 (ZHX3) and ZNF93 had been reported to be significantly increased and were associated with poor prognosis in gastric cancer [22] and ovarian cancer [23], respectively. Consistent with results of previous studies, our study showed for the first time that ZNF460 expression was significantly upregulated in colon cancer tissues at both the mRNA and protein levels, which was associated with poor prognosis and could be an independent prognostic factor in colon cancer patients. We also found that high expression of ZNF460 had a worse prognosis in male than female. This result was contradictory to the TCGA result, suggesting that it might be related to geography and race.

In recent years, more and more ZNFs were identified as oncogene and promoted various tumors via enhancing cell proliferation [24], promoting cell migration and invasion [25], suppressing autophagy [26], and epithelial-mesenchymal transition [27]. ZNF460 gene co-expression network analysis established that ZNF460 had a positive correlation with ZNF484, ZNF121, HMBOX1 and a negative correlation with MGAT4B, UCHL3, GTF2IRD1. It had been confirmed that ZNF121 and HMBOX1 played a role in promoting cancer proliferation in breast cancer and gastric cancer [28, 29]. Therefore, we speculated that ZNF121 and HMBOX1 played a collaborative role with ZNF460 in carcinogenesis of colon cancer.

In summary, we found that ZNF460 was overexpressed in colon cancer, and its expression was correlated with clinical outcome. ZNF460 overexpression was significantly associated with poor prognosis and increased metastatic capabilities of human colon cancer by activating JAK2/STAT3 signaling pathway, and ZNF460 might act as a potential prognostic biomarker and therapeutic target.