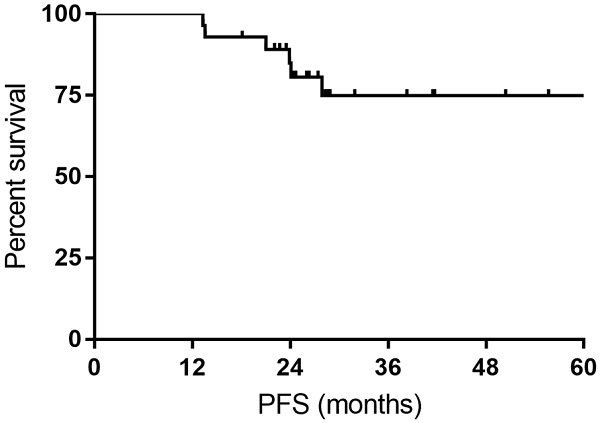 Purpose: Diffuse large B cell lymphoma (DLBCL) with MYC rearrangement or double expression of MYC and BCL-2 (DE DLBCL) has a relatively poor prognosis and does not respond well to standard R-CHOP. In the current study, we aimed to investigate the efficacy and safety of R-split-EPOCH plus high dose methotrexate (HD-MTX) in the particular patient population.

Methods: A total of 28 patients diagnosed with DE DLBCL or DLBCL with MYC rearrangement between January 2015 and December 2018 were included and retrospectively analyzed. All the participants underwent R-split-EPOCH plus HD-MTX as introduction therapy, with split infusion of etoposide, doxorubicin, and vincristine for 48 hours on D1-2 and D10-11, respectively.

Conclusions: R-split-EPOCH plus HD-MTX regimen is an effective and feasible treatment option for DE DLBCL and DLBCL with MYC rearrangement.

Diffuse large B cell lymphoma (DLBCL) is the most frequent type of non-Hodgkin's lymphomas, accounting for 30-40% of newly diagnosed lymphoma cases in China [1]. The combination of rituximab plus CHOP (cyclophosphamide, doxorubicin, vincristine, prednisone; R-CHOP) has been established as the standard frontline care for DLBCL by a series of prospective trials, and has greatly improved the clinical outcome of DLBCL in the past two decades [2-4].

However, DLBCL is molecularly heterogeneous and appropriately 30% of DLBCL patients would ultimately develop refractory or relapse disease after receiving first-line treatment of R-CHOP [3]. MYC 8q24 rearrangement is a relatively frequent molecular event in DLBCL and is found to be strongly associated with poor prognosis of DLBCL treated with R-CHOP [5, 6]. Recently, DLBCL patients harboring genetic rearrangement of MYC, with concurrent translocation of BCL2 and/or BCL6, which are found to have significant shorter survival than patients without genetic alterations of MYC, have been recognized as a novel category of high-grade B cell lymphoma (HGBCL) by the revised 4th edition of World Health Organization classification [7]. In addition, DLBCL patients with co-expression of MYC (≥40%) and BCL2 (≥50%) are now considered as double expressor lymphomas (DE DLBCL) [8]. Although DE DLBCLs don't form an independent entity in the revised World Health Organization classification, they serve as biomarkers for unfavorable prognosis in the R-CHOP era [8].

Given that R-CHOP doesn't show sufficient efficacy in DLBCL with MYC rearrangement and DE DLBL, the use of intensive regimens has been prompted in these patients. The infusional dose-adjusted etoposide, prednisone, vincristine, cyclophosphamide, and doxorubicin (DA-EPOCH) combination is a dose-intense immunochemotherapy and shows promising results in Burkitt's lymphoma, which is recognized a highly proliferative lymphoma with MYC-rearrangement. In untreated large B cell lymphoma, DA-EPOCH showed a high complete response rate of 92% and promising data of PFS and OS [9]. Furthermore, rituximab plus DA-EPOCH (DA-EPOCH-R) resulted in a 1-year PFS rate of 85% [10, 11]. In 2018, Dodero et al. compared the outcome of de novo DE DLBCL patients treated with DA-EPOCH-R and R-CHOP, demonstrating that DA-EPOCH-R could achieve a better PFS for young DE DLBCL patients [12]. In patients with MYC-rearranged aggressive B-cell lymphomas, the currently available data suggests that DA-EPOCH-R has a relatively higher response rate and in some instances with improved survival [13].

Despite the lack of prospective data regarding the DA-EPOCH-R in DLBCL with MYC rearrangement and DE DLBCL patients, the regimen has been widely accepted as an option for these patients. However, DA-EPOCH-R was more toxic in previous studies and less tolerable in elderly and fragile patients. Splitting the administration of chemotherapy agents is a rational option without compromising the dose-intensity, and has been succeeded in a series of solid cancers and hematological malignancies [14, 15]. Kreher et al. introduced R-split-CHOP to treat elderly patients with DLBCL, suggesting that R-split-CHOP could be safely used in elderly patients who were at risk of treatment-related complications [15]. In our institution, we have used R-split-EPOCH plus high dose methotrexate (HD-MTX) to treat DLBCL with MYC rearrangement and DE DLBCL since the year of 2015. In the current study, we aimed to investigate the efficacy and safety of R-split-EPOCH plus HD-MTX in the particular patient population.

All patients signed consent for the collection and procession of clinic-pathological data throughout the period covered by this study. The study was approved by the Bioethics Committee of our institution for a retrospective analysis of the collected data and undertaken in accordance with the ethical standards of the World Medical Association's Declaration of Helsinki. We have uploaded the essential raw data onto the Research Data Deposit (RDD) public platform (https://www.researchdata.org.cn).

All patients diagnosed with DLBCL between January 2015 and December 2018 were retrospectively reviewed in our institution. Included patients met the following criteria: (a) the disease was pathologically diagnosed as DLBCL with MYC rearrangement or with co-expression of MYC (≥40%) and BCL2 (≥50%); (b) complete clinical and treatment information were available; (c) the patients were between 18 and 80 years of age; (d) no involvement of CNS; (e) no antitumor treatment was given before admission; and (f) the patient presented with at least one measurable lesion. The exclusion criteria were (a) patients with other types of malignancy and (b) patients with insufficient renal function or hepatic function.

Rituximab (375 mg/m2) was given before the start of EPOCH. Etoposide 50 mg/m² per day, doxorubicin 10 mg/m² per day, and vincristine 0.4 mg/m² per day were all infused for 48 hours on D 1-2 and D 10-11, while cyclophosphamide 375 mg/m² was intravenously administered on D3 and D12. Prednisone was orally administered as 60 mg/m² a day on D1-3 and D10-11. MTX (3 g/m2) was infused for 12 hours on D 12, followed 12 hours later by leucovorin 30 mg every 6 hours. MTX levels were measured every 12 hours until the MTX level was <1×10-7 mol/L. The chemotherapy treatment was repeated every 3 weeks, and total cycles of chemotherapy were decided by physician. Dose escalation was not allowed in this study. Granulocyte colony-stimulating factor (G-CSF) was applied at the physician's discretion and prophylactic G-CSF was not routinely used. CNS prophylaxis with intrathecal methotrexate and cytarabine was administered to all patients but those with lumbar diseases. The therapy was ceased if the disease progressed or intolerable toxicity occurred. According to the physicians' decisions and patients' willingness, patients underwent consolidation therapy [autologous stem-cell transplantation (ASCT) or radiation].

Pretreatment evaluations included physical examination, bone marrow aspiration and biopsy, routine laboratory tests, electrocardiogram, echocardiogram. 18F-fluorodeoxyglucose (18F-FDG) PET/CT scan was selected for disease staging at baseline in all patients. Radiological scan was performed post cycle 2, cycle 4 and cycle 6, and all patients underwent interim 18F-FDG PET/CT scan. Response was assessed by investigators per Revised Response Criteria for Malignant Lymphoma [16]. After completing treatment, the patients were evaluated by repeat radiological scans every 3 months for the first two years and then every 6 months for years 3-5. Upon cessation of treatment, each patient was followed up every 3 months at the clinic or by telephone interview until 5 years. Treatment-related adverse events were evaluated with the Common Terminology Criteria for Adverse Events (CTCAE) version 4.0 [17].

Finally, our study enrolled a total of 28 patients. The 28 participants had a median age of 47.5 years (range 27-69), 15 (53.6%) were male, and 20 (71.4%) had Ann Arbor stage III and IV disease. According to international prognostic index (IPI), 12 (42.9%) patients had high-intermediate or high-risk disease. Fifteen patients were diagnosed as DE DLBCL. The rest 13 patients all had MYC rearrangement, and among them 4 double-hit lymphomas (DHL) and 5 triple-hit lymphomas (THL) were identified. All the patients' characteristics were summarized in Table 1. 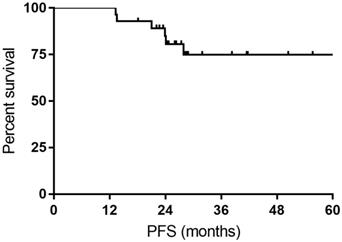 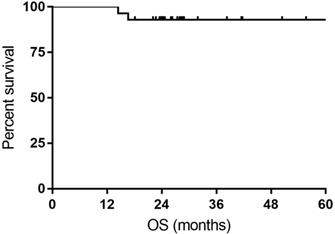 All patients had available toxicity data for safety analysis. No treatment-related death was reported. Table 3 lists the detailed toxicity data. Generally, hematological toxicity was more common than non-hematological toxicity in our study. All patients received G-CSF for one or more cycles of therapy. Grade 3/4 neutropenia, anemia and thrombocytopenia occurred in 85.7%, 57.1%, and 39.3% of patients, respectively. 16 (57.1%) patients developed febrile neutropenia and 7 (25%) patients developed pneumonia during the therapy. The most frequent grade 3/4 non-hematological toxicity was mucositis (39.3%). Of note, concentration of MTX beyond permissible standard was reported in two patients (7.1%) at 48 hours after infusion, which discontinued the HD-MTX in subsequent cycles.

To the best of our knowledge, our study is the first one observing the preliminary efficacy and safety profile of R-slit-EPOCH plus HD-MTX in untreated DLBCL with MYC rearrangement or double expression of MYC and BCL-2. In the current study, the regimen of R-slit-EPOCH plus HD-MTX gave a relatively high response rate and yielded promising survival. Meanwhile, the regimen was also well tolerated by most of patients and showed reliable safety.

DE DLBCL is recognized as a high-risk subtype of DLBCL and has a poor clinical outcome [8, 18]. Several colleagues attempted to treat this particular disease with intensive chemotherapeutic regimens, of which DA-EPCOH-R was an optional selection. Dodero et al. [12] adopted DA-EPOCH-R for DE DLBCL patients and compared the survival in DA-EPOCH-R and R-CHOP cohorts. The data demonstrated a better 2-year OS of DA-EPOCH-R (90% vs 67% of R-CHOP, p= 0.07), whereas in patients younger than 65 years DA-EPOCH-R obtained significantly better 2-year PFS and OS than R-CHOP. Although splitting the delivery of standard dose of R-EPOCH, our study showed inspiring response rate (ORR 100%, CRR 93.3%) in 15 DE DLBCL patients, with a 2-year PFS of 79.1% and a 2-year OS of 100%.

DLBCL with MYC rearrangement with or without BCL2/BLC6 rearrangement is considered as extremely high-risk subtype of non-Hodgkin's lymphoma [16, 19]. Due to the rarity, there is a lack of prospective studies guiding the treatment of these patients, and the current literature consists of retrospective data [20-23]. To date, intensive regimens with higher response rates, such as DA-EOPCH-R and R-CODOX-M/R-IVAC, are now recommended for the frontline treatment of these patients. In a multicentre study, Dunleavy et al. evaluated the outcome of DA-EPOCH-R in aggressive B-cell lymphoma patients with MYC rearrangement, of which 24 participants were identified as DHL/THL [24]. DA-EPOCH-R yielded a ORR of 87% in the whole cohort and a 4-year OS of 82%, as reported by Dunleavy et al. [24], revealing that DA-EPOCH-R obviated the adverse effect of MYC rearrangement and was a feasible treatment option for these patients. In another study from American, DA-EPOCH-R showed a high CRR of 68% and improved event free-survival and OS when compared with R-CHOP in DHL patients [22]. Our study showed a comparable CRR of 76.9% and an encouraging 2-year OS of 84.6%, indicating R-split-EPOCH was also highly active in treating DLBCL with MYC rearrangement.

Central nervous system (CNS) involvement should always be paid attention to high-risk DLBCL. CNS involvement could occur at initial diagnosis or at the time of disease relapse. Previous data showed that the incidence of CNS involvement was 9.7% in DE DLBCL [18] and 13% in DHL [21, 23]. Therefore, prophylaxis for CNS disease was important and necessary for these patients. In contrast to intrathecal injection of MTX or cytarabine, intravenous HD-MTX could penetrate the brain-blood barrier and was proved to be more effective in brain parenchyma. However, it is very difficult to delivery intravenous MTX with DA-EPOCH-R. We gave HD-MTX to patients on D12 following the second section of split-EPOCH. Of note, only two MTX-intoxication events were found and were ultimately relived with adequate detoxication. During the follow-up time, no CNS involvement was found. Our results showed that the addition of HD-MTX to R-split-EPOCH was feasible and effective in prophylaxis of CNS.

There are also several limitations in our study. This single center study inevitably has patient selection bias due to its retrospective nature. On the other hand, the study is of insufficient size for the exploratory analyses of prognostic factors. Nevertheless, we are still encouraged by these preliminary efficacy and survival data in this study. All patients underwent 18FDG-PET/CT scan to confirm treatment response, and these findings strongly indicate that our regimen is highly active in DE DLBCL or DLBCL with MYC rearrangement. We are now planning to conduct a prospective study to further validate our findings.

In summary, R-split-EPOCH plus HD-MTX regimen as first-line treatment demonstrated high response rates and favorable survival in DE DLBCL and DLBCL with MYC rearrangement. Meanwhile, treatment-related toxicities were well tolerated and acceptable in this study. Our results provide some preliminary data to support an optional and safe treatment for these patients.

This study was supported by the General Funds of the Natural Science Foundation of Guangdong Province, China (No. 2017A030313754).