Methods: Invasive UTUC patients from the Surveillance, Epidemiology and End Results database (2004-2015) were screened for inclusion. A total of 10,482 eligible cases were identified. Cancer-specific survival (CSS) after surgery was analyzed using Kaplan-Meier plots.

Conclusions: Stage IV patients were stratified into two prognostically different risk groups depending on metastasis or grade. The subclassification of stage IV can increase the level of prognostic detail and individualize the prediction of survival in invasive UTUC patients.

Urothelial carcinomas are the fourth most common tumors [1]. The American Joint Committee on Cancer/Union Internationale Contre le Cancer (AJCC/UICC) tumor-node-metastasis (TNM) staging system is widely used to predict upper tract urothelial carcinoma (UTUC) patient prognosis, guide treatment options, and evaluate treatment results from different centers. UTUCs are uncommon and account for only 5-10% of urothelial carcinomas; however, 60% of UTUCs progress to invasive disease [2]. Because of the rarity of this type of cancer, relatively limited data regarding TNM staging have been obtained by the European Association of Urology (EAU) and the National Comprehensive Cancer Network (NCCN) [2, 3].

In this study, we critically analyzed the controversial areas of the AJCC-TNM prognostic group staging system to discuss whether the modified AJCC-TNM prognostic stage group IV can be subdivided to provide more detailed prognoses for patients with invasive UTUC.

Among the included patients, only patients with transitional cell carcinoma or papillary transitional cell carcinoma confirmed by histology were considered. The inclusion and exclusion criteria are shown in Fig. 1. The cause of death (cancer-specific versus noncancer related) was defined according to the SEER assignment of the cause of death. Patients who did not die of UTUC were considered to have died due to other causes. The histopathological data were reviewed by an independent pathology committee, and all histopathological reports were based on the AJCC-TNM staging system [7]. For repeated data, the highest level of histopathological data or prime data were considered.

The outcome of interest was cancer-specific survival (CSS). The Kaplan-Meier method was used to determine the CSS. The log-rank test was used to compare CSS rates between different groups. Statistical analyses were performed with Statistical Package for the Social Sciences software (SPSS version 23, IBM Corp, Armonk, NY). A two-sided P value less than 0.05 was considered statistically significant.

Flow chart of patients included in the primary analysis. 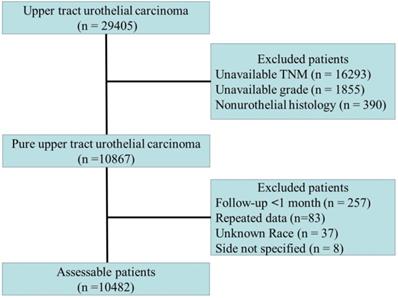 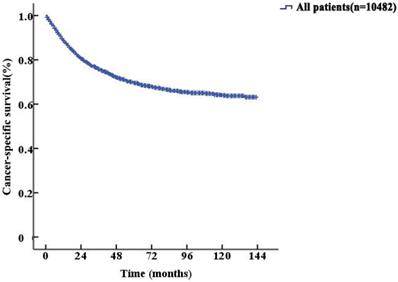 Predictive accuracy of the staging system

Harrell's concordance index (C-index) and bootstrap-corrected C-index values for the stages are shown in Table 3. The value of the modifications did not decrease.

To enable prognostic prediction, the AJCC/UICC-TNM system was established using a mix of clinical and pathologic diagnoses, and it accurately reflects the prognosis in patients with UTUC [7]. The TNM classification is widely used to determine prognosis and inform the selection of an effective treatment. In the current AJCC-TNM prognostic group staging system, stage IV is defined as tumor invasion of the adjacent organs or through the kidney into the perinephric fat, lymph node metastasis and distant metastasis [2, 7]. However, the stage IV criteria are similar to those of previous versions without any recent changes [10, 11]. In this study, we critically analyzed the heterogeneity of the stage IV criteria and discussed the predictive value and feasibility of a staging system for invasive UTUC. Based on different pathological factors, two modifications were proposed to help better differentiate AJCC stage IV disease without any loss of predictive value. 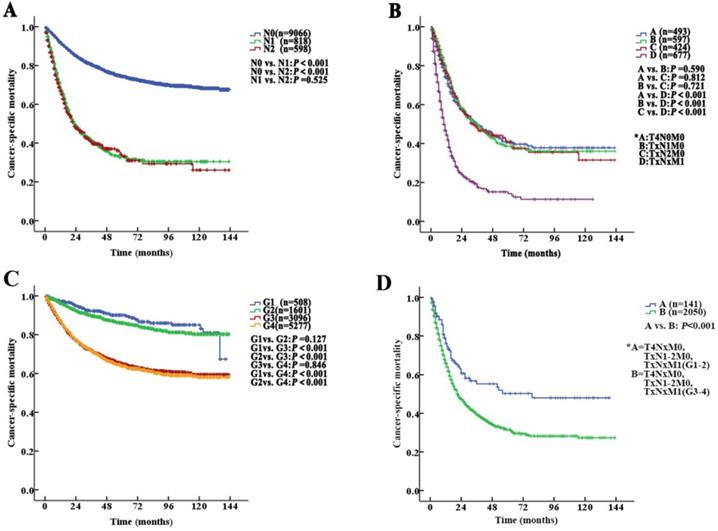 Tumor grade is also one of the most important predictors of survival in patients with UTUC [18]. The updated World Health Organization Classification provides more useful insights into and approaches to individual categories [6, 19, 20]. In our study, stage IV tumors were subdivided as follows (Modified Stage 2): stage IVa tumors were considered low grade (T4NxM0, TxN1-2M0, TxNxM1; G1-2), and stage IVb tumors were considered metastatic (T4NxM0, TxN1-2M0, TxNxM1; G3-4), and there was a significant difference in mortality.

UTUC shares a similar etiology and histologic distribution with urothelial cancers of the bladder [19]. According to the AJCC prognostic stage for tumors of the urinary bladder, stage IV was subdivided into stage IVa (T4bN0M0 and TxNxM1a) and stage IVb (TxNxM1b) on the basis of the presence of distant metastases [21]. Stage IV UTUC tumors also include T4N0M0, TxN1M0, TxN2M0 and TxNxM1. Interestingly, we found that the stage IV subgroups were heterogeneous. The mortality curves for T4N0M0, TxN1M0 and TxN2M0 overlapped and crossed. In addition, M1 disease was generally associated with a poor prognosis. Further analysis, divided stage IV upper urinary tract carcinomas into locoregionally advanced and metastatic disease subcategories. The molecular mechanisms underlying the observed interaction between locally advanced disease and distant metastases in UTUC patients may help clarify the results of this study [8].

There are few accurate predictive tools for UTUC [3]. Nomograms, which use demographic and clinicopathologic data to predict oncologic outcomes, have attracted increased interest in the past few years [22-24]. Nomogram models have been constructed using different factors, so there is no consensus yet, and they are not widely used in clinical practice. Currently, AJCC prognostic stage groups are used to discriminate between prognostic subgroups within a patient population [25]. The treatment of UTUC differs significantly based on stage [26-28]. Our study suggests a subgroup analysis is useful in the stage IV group to establish more individualized therapeutic strategies and prognostic predictions. It is conceivable that the inclusion of detailed pathologic information could further enhance the individuation of the current model.

We acknowledge that our study had some limitations. First, the analyses were retrospective in nature because the collection of data from the SEER database was retrospective. The treating physician's perception of the patient's prognosis and the treatment (especially adjuvant therapies) were not included in the data. Second, other variables may be beneficial for predicting CSS. Unfortunately, the upper urinary tract tumor location, tumor architecture, tumor size, presence of lymphovascular invasion, molecular biology (chromosome abnormalities), biomarkers, and lymph node dissection could not be obtained from the SEER database. We did not calculate the difference with regard to established modifications because some factors could not be collected. We compared the newly developed modifications with the 8th AJCC-TNM classification system. The predictive accuracy of the modified AJCC-TNM prognostic group staging system should be tested in an external cohort to determine its validity with regard to prediction in clinical practice. Third, we failed to contribute any original laboratory finding or clinical observation from patients for external verification. However, we believe that different established modifications could be verified with unified data. Thus, all analyses should be considered exploratory rather than hypothesis-driven. Despite these limitations, we believe that a simple analysis is important to establish a basis for future validation studies with larger multicenter datasets.

We are grateful to the authors, the enrolled patients, their families, and the referring physicians. We also gratefully acknowledge the contribution of all colleagues to this study. Additionally, we thank our families for their support.

This work was supported by the National Natural Science Foundation of China (Grant No. 81902610) and Science and Technology Planning Project of Shenzhen Municipality (CN) (JCYJ20190807145409328).

The datasets used and/or analyzed during the present study are available from the corresponding author on reasonable request.

KF Xiao had full access to all data in the study and takes responsibility for the integrity of the data and the accuracy of the data analysis. Study conception and design: ZS Li, XY Li, and KF Xiao. Acquisition of data: All authors. Analysis and interpretation of data: All authors. Drafting of the manuscript: ZS Li and XY Li. Critical revision of the manuscript for important intellectual content: KF Xiao. Statistical analysis: All authors. Obtaining funding: ZS Li. Administrative, technical, or material support: KF Xiao. Supervision: ZS Li, XY Li, and KF Xiao. Other (specify): None.

The present study was approved by the Ethics Committee of Shenzhen People's Hospital (No. LL-KY-2020123).