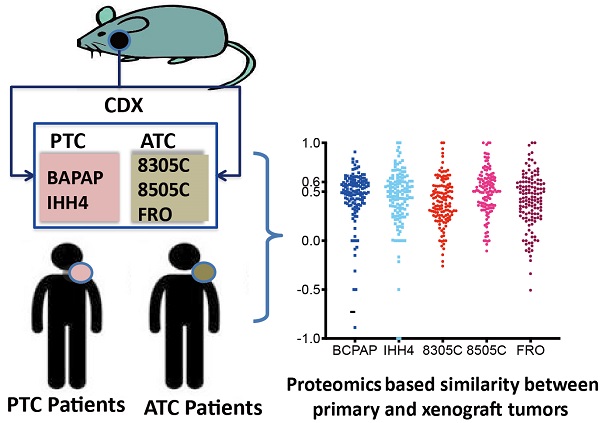 Patient-consistent xenograft model is a challenge for all cancers but particularly for thyroid cancer, which shows some of the greatest genetic divergence between human tumors and cell lines. In this study, proteomic profiles of tumor tissues from patients, included anaplastic thyroid carcinoma (ATC) and papillary thyroid carcinoma, and xenografts (8305C, 8505C, FRO, BAPAP and IHH4) were obtained using HPLC-tandem mass spectrometry and compared based on all proteins detected (3,961), cancer-related proteins and druggable proteins using pairwise Pearson's correlation analysis. The human tissue showed low proteomic similarity to the ATC cell lines (8305C, r = 0.344-0.416; 8505C, 0.47-0.579; FRO, 0.267-0.307) and to PTC cell lines (BCPAP, 0.303-0.468; IHH4, 0.262-0.509). Human tissue showed the following similarity to cell lines at the level of 135 cancer-related pathways. The ATC cell lines contained 47.4% of the cancer-related pathways (19.26%-33.33%), while the PTC cell lines contained 40% (BCPAP, 25.93%; IHH4, 28.89%). In patient tumor tissues, 44-60 of 76 and 52-53 of 93 druggable proteins were identified in ATC and PTC tumors, respectively. Ten and 29 druggable proteins were not identified in any of the ATC and PTC xenografts, respectively. We provide a reference for CDX selecting in in vivo studies of thyroid cancer.

The most commonly used preclinical in vivo model of cancer is a cell line-derived xenograft (CDX), which is generated by transplanting human tumor cells into immunocompromised mice. While CDX studies have generated valuable insights, CDX tissue and tumor patients differ in their behavior, making CDX inadequate for understanding and predicting human tumor behavior and response to therapy [1]. CDX tissue differs genetically from patient tissue because CDX tissue is derived from a single patient, who differs genetically from other patients with the same cancer, and because cell lines is vulnerable to selected evolution [2, 3] and genomic instability [4]. CDX and original human tumor tissue differ not only in their intrinsic genetics from cell line but also in their mechanisms of growth. For example, a proteomic study found that six of 10 pathways differed substantially between high-grade glioma cell lines and their CDX's [5].

Selecting appropriate cell lines is essential for accurate cancer studies, but choosing the best cells is often purely empirical. Common cell lines are often used, but their genetic consistency with tumor samples is often unclear. Ovarian cancer, for example, may be better studied using some rarely used cell lines than commonly used lines [6]. Systematic analysis of the similarities and differences between CDX's and human tumors may help guide the selection of appropriate CDX's to mimic tumors for basic cancer research and translational studies.

Towards this goal, various cancer cell lines have been evaluated, as have pooled analysis of various cancers [1, 6-12] or specific types of solid tumors, including breast cancer, hepatocellular carcinoma, and melanoma [13-15]. Moderate correlation was observed between mRNA levels in cell lines and primary solid tumors, with a median correlation coefficient of 0.6 [12]. But, the lowest corresponding coefficient (only 0.29) was found in thyroid cancer and <0.3 for the two subtypes of thyroid cancer, papillary thyroid carcinoma (PTC) and anaplastic thyroid carcinoma (ATC) [16]. PTC is more common and involves well-differentiated tumors and good prognosis, while ATC is less common and involves less differentiated, more aggressive tumors. Therefore, the proteomic consistence was also need to be clear.

To provide a rational basis for selecting the most appropriate CDX for thyroid cancer studies, we performed proteomics profiling of ATC and PTC tumors as well as several CDX's (ATC: 8505C, 8305C, FRO; PTC: BCPAP, IHH4). The two types of cancer tissue were compared in terms of total proteins, cancer-related pathways and druggable proteins. The results lead us to recommend certain cell lines over others for in vivo studies of thyroid cancer.

Fresh frozen samples of primary tumor were obtained from five ATC patients (4 men, 1 woman) and 28 PTC patients (13 men, 15 women) who underwent surgery in Zhejiang Cancer Hospital in Hangzhou, China (Table 1). All specimens were flash-frozen after tissue type had been confirmed. This study was approved by the Ethics Committee of Zhejiang Cancer Hospital and performed according to the Declaration of Helsinki and Good Clinical Practice guidelines. Patients provided written informed consent for their tissue to be used in this study.

Five thyroid carcinoma cell lines were used in this study: the ATC cell lines 8305C, 8505C, and FRO were obtained from the Shanghai Cell Bank of the Chinese Academy of Sciences (Shanghai, China); while the PTC cell lines BCPAP and IHH4 were obtained from professor Haixia Guan (Department of Endocrinology and Metabolism, The First Affiliated Hospital of China Medical University, Shenyang, P.R. China). Cell lines 8305C and 8505C were cultured in DMEM, while the other lines were cultured in RPMI-1640. In all cases, the medium was supplemented with streptomycin (100 U/mL) and penicillin (100 U/mL) as well as fetal bovine serum (FBS) to a final concentration of 5% (FRO) or 10% (all other lines). Cultures were incubated at 37 °C in a humidified atmosphere of 5% CO2.

Raw spectral data were processed and quantitative ratios determined using PEAKS Studio 8 (Bioinformatics Solutions); parent mass tolerance was 15.0 ppm and fragment mass tolerance was 0.8 Da. Results were compared against UNIPROT databases of Piriformospora and Brassica (updated to April 2017). Protein identifications were accepted if the false detection rate (FDR) was <1% and if the score -10×log10 P was >20. The minimum number of unique peptides was set to 1, and the maximum number of post-translational modifications was set to 3. ANOVA was used to assess differences for statistical significance.

Cancer-related genes were determined by mining abstracts indexed in MEDLINE up to 18 September 2017 using the text-mining engine DiGseE [17]. Critical pathways closely related to cancer were identified using DAVID Bioinformatics Resources 6.8. Statistical significance and significant enrichment were defined as p < 0.10. The list of 672 human proteins directly related to the mechanisms of action of drugs approved by the US Food and Drug Administration was obtained from Drugbank (Table S1).

Human primary PTC or ATC tumors were compared with the corresponding CDX models in terms of their proteomic profiles or cancer-related pathways. This comparison was performed based on the pairwise Pearson correlation coefficient as described [12], here applied to the normalized expression levels of total detected proteins or proteins enriched in the particular cancer-related pathway under consideration. Similarity at the proteomics level was calculated between each patient and each CDX, while similarity at the level of individual cancer-related pathways was calculated between all ATC or PTC patients and each CDX. In brief, a linear model from the Linear Models for Microarray Data (LIMMA) package was fitted, and the average fold-difference for each protein between primary and xenograft tumors was calculated. Then, the pairwise Pearson's correlation coefficient between tumors and cell lines was calculated based on the fold-differences for all proteins or only for the proteins involved in a certain pathway. Similarity of cancer-related pathways between tumors and CDX's were assessed using the Mann-Whitney U test.

A total of 3,961 proteins were identified from tumor samples. 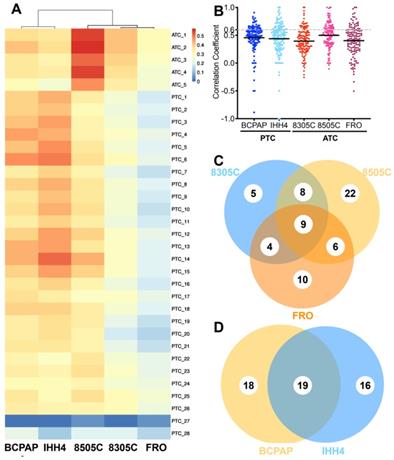 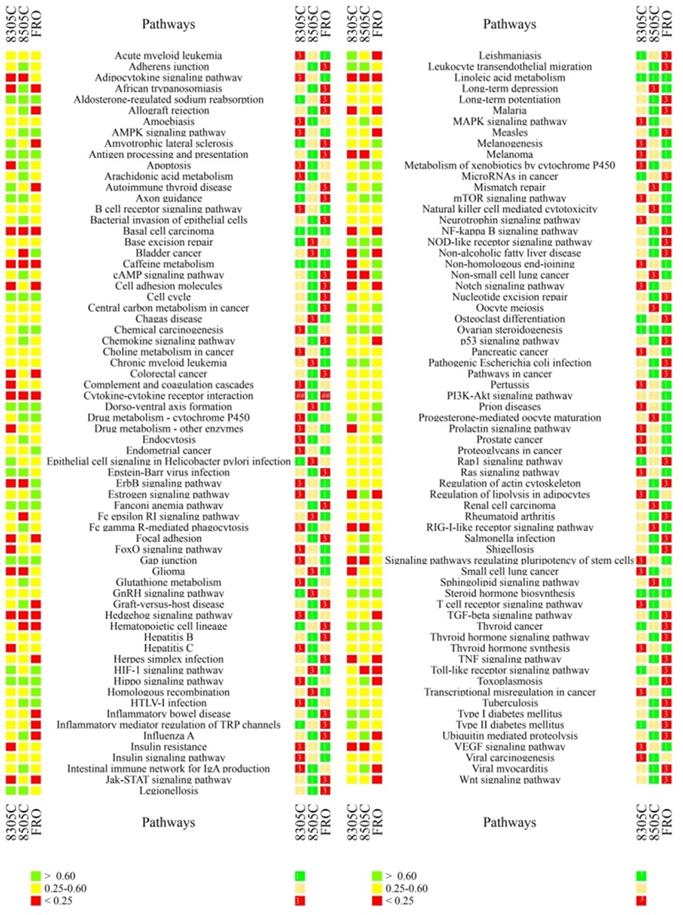 The phenotypic discrepancies between preclinical models and patients is a challenge in basic cancer studies and in efforts to discover and develop antineoplastic agents [18-21]. This has motivated searches for xenograft tumor models that show maximum similarity to primary human tumors. These efforts are limited by lack of understanding about molecular details of cancer cells [22], and they have been less successful with thyroid cancer. Therefore we employed proteomics and other analyses to compare total protein profiles as well as proteins involved in specific cancer-related pathways between primary thyroid cancer tumors and xenograft tumors derived from several cell lines. Proteomic profiles of 28 primary human PTC tumors and five ATC tumors were compared with proteomic profiles from two PTC CDX's (BCPAP, IHH4) and three ATC CDX's (8305C, 8505C, FRO). Similarity between the two kinds of tumor tissue was assessed according to total proteins, cancer-related proteins, and druggable proteins.

Similarity between primary and xenograft tumors was further investigated at the level of individual cancer-related pathways. A total of 135 cancer-related pathways were identified based on KEGG analysis of gene enrichment in publications from MEDLINE. The similarity of each pathway was calculated based on the expression levels of all involved proteins more than differential proteins. The two PTC cell lines and three ATC cell lines in this study covered 54 (40.0%) and 64 (47.4%) of cancer-related pathways. Overall, these pathways showed moderate similarity between CDX's and human tumors. More than 70% of pathways showed low consistency between the two tumor types. Even in the cell line showing the highest consistency, 8505C, only 33.33% of pathways showed high consistency with primary tumors. Up to one quarter of pathways (11.9-24.4%) showed correlation coefficients <0.25. Priority recommended cell lines were identified for approximately 40 percent of 135 pathways (53 in PTC and 64 in ATC). BCPAP was identified as being not recommended for 15 (11.11%) of pathways with r < 0.25; IHH4, 26 (19.26%) pathways; 8305C, 14 (10.37%) pathways; 8505C for 32 (23.70%) pathways; and FRO, 33 (24.44%) pathways.

The heterogeneous consistency between primary and xenograft tumors at the level of individual pathways suggests that no single CDX model fits most pathways important in thyroid cancer. Our finding that many immunology-related pathways, such as those involving Toll-like receptors, TNF, or NF-κB, show low consistency between primary and xenograft tumor types likely reflects the immunosuppression intrinsic to nude mice. The lack of consistency in the hedgehog pathway between primary and xenograft PTC or ATC tumors is an important reminder of the need to choose cancer cell lines cautiously. The hedgehog pathway is activated to stimulate the growth and spread of many types of solid tumors, including thyroid cancer. It may also affect patient prognosis, but this remains controversial [23, 24]. Inhibiting hedgehog signaling by knocking down key genes or applying small-molecule inhibitors significantly reduces cell proliferation [24]. In fact, two small-molecule inhibitors of hedgehog signaling, cyclopamine and GDC-0449, have been explored in vitro as candidates for thyroid cancer treatment [25, 26]. Interestingly, the pathway “thyroid cancer” showed low similar between primary PTC tumors and IHH4 or BCPAP-derived xenografts. 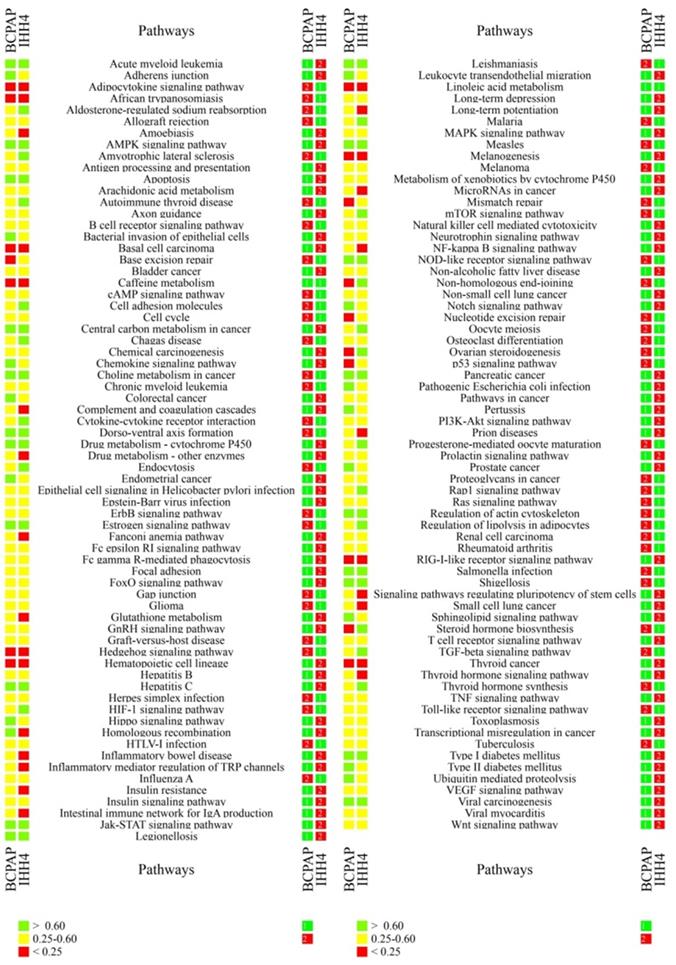 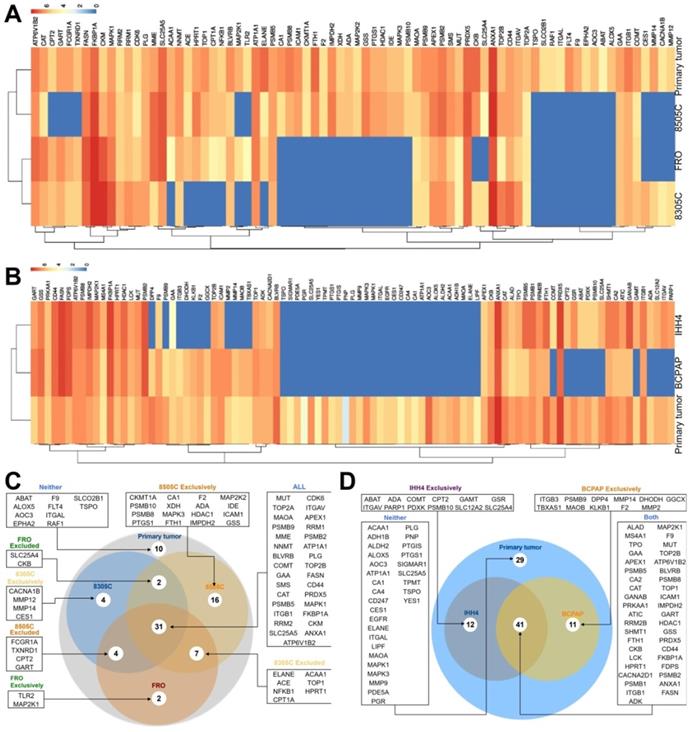 There're also limitations of subcutaneous xenograft tumor model. For example, subcutaneous tumor size variability was generally very low, and the proliferation rate was slower than orthotopic tumor model. These differences in overall growth indicated the crucial role of an appropriate microenvironment and organ-specific angiogenesis in facilitating initial tumor growth and perhaps later aggressiveness. Another important reason is that subcutaneous xenograft tumor model do not clearly reproduce the primary site of cancers and nor do they represent the common sites of metastasis. On the contrary, orthotopic tumor placement appears to better mimic the microenvironment, morphology, growth, and metastatic patterns of human cancer. Therefore, these limitations may also be important reasons for the poor correlation between the CDX model and the primary model in thyroid tumor in our study. Moreover, the mutation status, express levels of key genes should be focus in future studies.

This study was approved by the Ethics Committee of Zhejiang Cancer Hospital and performed according to the Declaration of Helsinki and Good Clinical Practice guidelines. Patients provided written informed consent for their tissue to be used in this study.

Animal studies were conducted according to the National Research Council's guidelines and approved by the Committee on the Ethics of Animal Experiments of Zhejiang Cancer Hospital and the Center for Drug Safety Evaluation at Zhejiang University.

15. Tveit KM, Pihl A. Do cell lines in vitro reflect the properties of the tumours of origin? A study of lines derived from human melanoma xenografts. Br J Cancer. 1981;44:775-86