Multiple myeloma (MM) is a hematologic tumor with monoclonal proliferation of malignant plasma cells in the bone marrow. Fascin (FSCN) is an actin-binding protein that plays a crucial role in cell migration and invasion, contributing to tumor metastasis. There are three members (FSCN1-3) in FSCN family. However, the prognostic role of FSCN family in MM remains unclear. In this study, we used four independent Gene Expression Omnibus (GEO) datasets to explore the relationships between FSCN1-3 expression profiles and patient survival in MM. We found that FSCN1 was dramatically down-regulated in MM compared to normal donors (p < 0.001) and monoclonal gammopathy of undetermined significance (MGUS) (p = 0.032). Patients with high expression of FSCN1 and FSCN2 had significantly longer OS (p = 0.023 and 0.028, respectively). Univariate and multivariate analysis showed that FSCN1 (p = 0.003, 0.002) and FSCN2 (p = 0.018, 0.013) were independent favorable prognostic factors for OS in MM. Moreover, the combination of high expression of FSCN1 and FSCN2 could effectively predict both longer EFS (p = 0.046) and OS (p = 0.015). Our study suggested that FSCN1 and FSCN2 can be used as favorable biomarkers for predicting clinical outcomes in MM.

Multiple myeloma (MM) is a hematologic malignancy characterized by the expansion of clonal plasma cells in bone marrow and abnormal secretion of immunoglobulins [1]. MM can be grouped into asymptomatic or symptomatic based on with or without myeloma-related organ or tissue dysfunction, including hypercalcemia, renal impairment, anemia and bone lesions [1, 2]. Monoclonal gammopathy of undetermined significance (MGUS) is considered as an asymptomatic premalignant stage. There are 0.5-1% of MGUS that can evolve into symptomatic MM (intramedullary MM) per year, and may finally progress to extramedullary MM or plasma cell leukemia (PCL) [1, 3]. Clinical stage and cytogenetic abnormalities are the most commonly used variables for risk stratification in MM [4]. In addition, gene expression profiling has been recognized as an important prognostic factor in recent years [4, 5]. Exploring more powerful biomarkers is very meaningful for identifying patients with poor prognosis earlier and providing better therapy strategies, especially for asymptomatic high-risk MM patients [6].

Fascin (FSCN) is a 55-kDa actin-binding protein involved in the formation and stability of microspikes, filopodia and invadopodia, which leads to cell adhesion, motility and migration [7-9]. There are three isoforms in FSCN family, including FSCN1, FSCN2 and FSCN3, which are encoded by FSCN1, FSCN2 and FSCN3 gene, respectively [10]. The expression of FSCN1 was low or absent from adult epithelia, but often highly increased in many aggressive carcinomas, such as breast cancer [11], pancreatic cancer [12] and hepatocellular carcinoma [13]. FSCN1 has been proved to play an important role in promoting metastasis of tumors [14-17]. For example, upregulated FSCN1 expression in oral squamous cell carcinoma (OSCC) derived cells resulted in a significant increase in cell migration and invasion. FSCN1 overexpression was significantly correlated with advanced tumor stage and lymph node metastasis in OSCC [18]. Moreover, high FSCN1 expression was strongly associated with poor clinical outcomes and could be used as a prognostic and predictive biomarker in different cancer types, including nonsmall cell lung cancer [19], urinary bladder urothelial carcinoma [20] and breast cancer [21, 22]. FSCN1 has been extensively studied in recent years, whereas very little is known about FSCN2 and FSCN3. It has been reported that FSCN2 and FSCN3 may function in progressive hearing loss [23] and terminal elongation of the spermatid head [24], respectively.

All clinical, cytogenetic and molecular information, as well as gene microarray expression data used in this study were collected from Gene Expression Omnibus (GEO) datasets (http://www.ncbi.nlm.nih.gov/geo). We divided all the samples into two cohorts. The first cohort was used for microarray expression analysis, including GSE39754 (6 normal donors, 170 MM) and GSE2113 (7 MGUS, 39 MM, 6 PCL). The gene expression data was analyzed by Affymetrix Human Genome U133 Plus 2.0 Array. The second cohort was mainly applied for survival analysis. This cohort consisted of two independent microarray datasets of MM patients, GSE24080 and GSE4581. The gene expression profiling of 559 newly diagnosed MM patients in GSE24080 and 414 untreated MM patients in GSE4581 were also evaluated by the Affymetrix Human Genome U133 Plus 2.0 Array.

All experiment design, quality control, and data normalization were in line with the standard Affymetrix protocols. The research was conducted in accordance with the International Conference and the Declaration of Helsinki.

The clinical and molecular characteristics of patients were described using median and/or range. Comparison of numerical data and categorical data were based on the Wilcoxon rank sum test, Kruskal-Wallis test and Fisher exact test, respectively. The Kaplan-Meier methods and log-rank test were applied for survival analysis. Co-expression analysis was conducted by calculating Pearson's correlation coefficient. Univariate and multivariate Cox proportional hazard models were constructed for EFS and OS, using a limited backward elimination procedure. The confidence interval is 95%. All statistical analysis was performed by R software 3.5.0.

To explore the relationship between FSCN1-3 expression levels and the progression of myeloma, we also analyzed FSCN1-3 expression levels of patients from GSE2113 in three different myeloma stages, including MGUS, MM and PCL. The FSCN1 and FSCN3 expression were also down-regulated in MM compared with MGUS (p = 0.032, 0.016, Fig 1B), no statistically significance was found between MM and PCL. There was no significant difference in FSCN2 expression among different myeloma stages (Fig 1B).

Using the GSE24080 dataset (559 MM patients), we analyzed the impact of FSCN1-3 expression on clinical outcomes in MM. Based on the median expression level of each FSCN member, we divided all the patients into low and high FSCN expression groups. The comparison of EFS and OS between different FSCN expression groups were shown in Table 1. High expression of FSCN1 was significantly associated with longer OS (p = 0.023, Fig 2C), and it had no obvious impact on EFS (p = 0.150, Fig 2A). EFS and OS in MM patients with high FSCN2 expression were longer than those with low FSCN2 expression (p = 0.027, 0.028, Fig 2B, Fig 2D). The expression level of FSCN3 had no effect on EFS and OS of patients in two groups (Table 1). The impacts of elevated levels of FSCN1 and FSCN2 on longer OS were also validated in another independent dataset GSE4581 (p = 0.049, 0.031, Fig 2E, 2F). 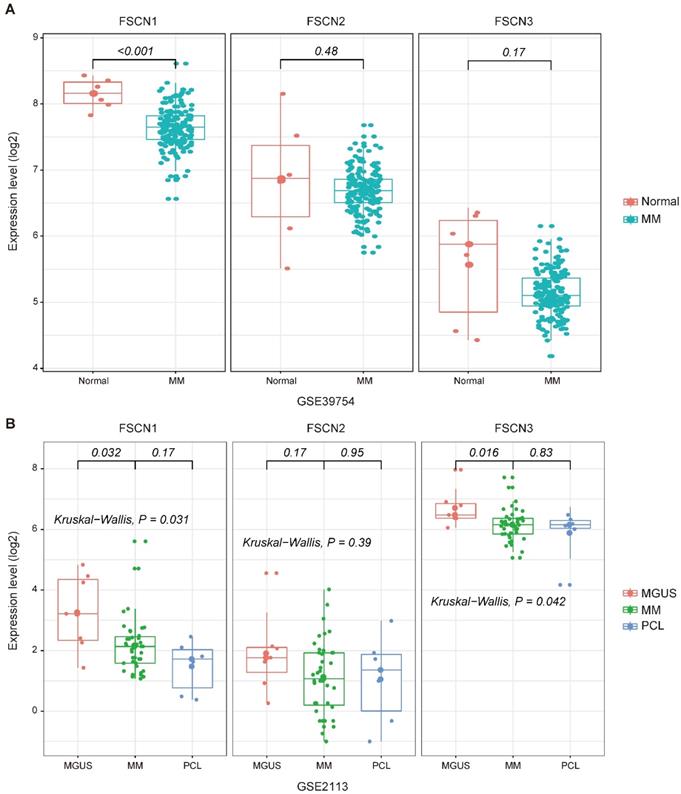 To identify the expression correlations between FSCN family members, we performed a gene co-expression analysis of 559 MM patients in GSE24080 dataset. As shown in Fig 3, the expressions of FSCN1-3 were not significantly associated with each other (all rPearson < 0.5, Fig 3).

Comparison of EFS and OS between the high and low expression levels of FSCN family in GSE24080. 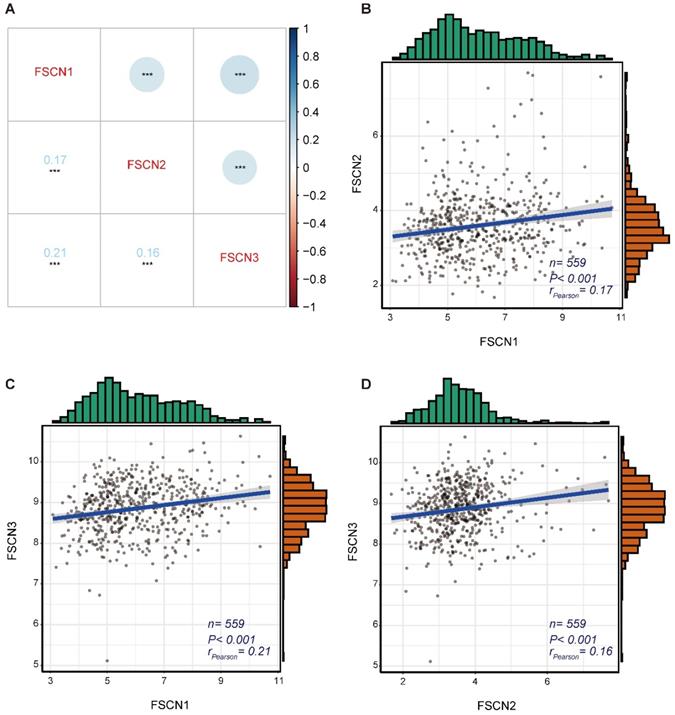 Univariate and multivariate analysis of possible prognostic factors in MM

The combined prognostic significance of FSCN1 and FSCN2 in MM

As FSCN1 and FSCN2 were proved to be independent prognostic factors in MM, we further explored their combined prognostic significance in 559 patients from GSE24080. As shown in Fig 4, FSCN1high FSCN2high group had significant longer EFS and OS compared to the other three groups (p = 0.046, 0.015). 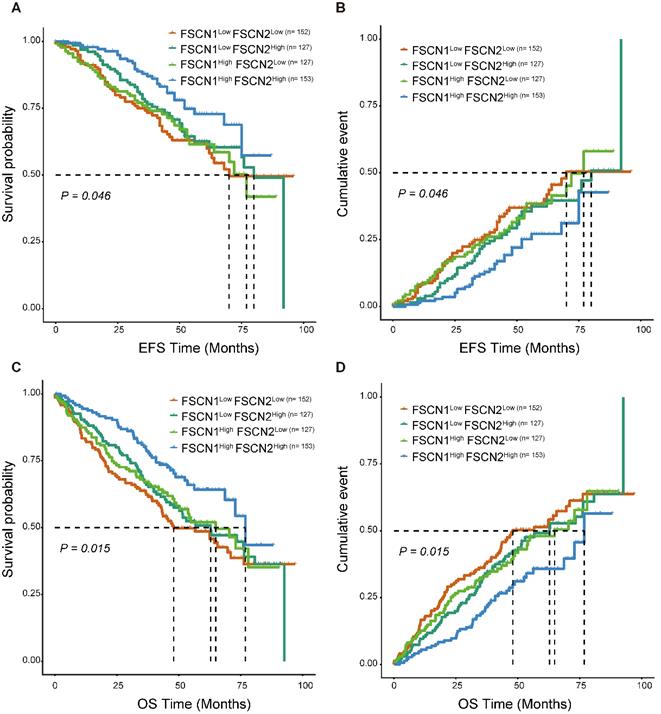 FSCN1 was usually up-regulated in many malignant tumors and could be considered as an oncogene by promoting migration and invasion of tumors cells [25]. Increasing evidences suggested that elevated level of FSCN1 was significantly correlated with increased metastatic potential and more aggressive phenotypes in a variety of tumors [26-29], and inhibiting FSCN1 could block the migration and metastasis of tumor cells [30]. For instance, the increased expression of FSCN1 in HR-negative breast cancers might contribute to their more aggressive behavior [11], down-regulation of FSCN1 by si-RNA dramatically reduced the migratory abilities of breast cancer cells [31]. Forced expression of FSCN1 in cultured colorectal cancer cells promoted their migratory and invasive capabilities in vitro and enabled cells had higher abilities to form metastases in vivo, whereas specific inhibition of FSCN1 expression reduced colorectal cancer cells invasion [32]. The anti-migration and anti-invasion effect by knocking-down expression of FSCN1 could also be found in ovarian cancer [33], non-small cell lung cancer [34] and glioblastoma [35]. Thus, inhibition of FSCN1 expression may be essential for anti-metastatic therapy. Additionally, the increased expression of FSCN1 has been proved to be an adverse biomarker predicting poor outcomes in many types of malignancies [36, 37]. Surprisingly, in contrast to most of malignancies, FSCN1 was found to be down-regulated in two independent GSE datasets in MM (GSE39754 and GSE2113, Fig 1), and high expression of FSCN1 was closely related to longer OS in MM, which was confirmed in 973 patients from GSE24080 and GSE4581 (Table 1, Fig 2). This unique inverse correlation between the expression of FSCN1 and the prognosis of MM patients is unexpected and needs further investigation. In addition, compared with FSCN1low group, patients with high expression of FSCN1 had decreased levels of unfavorable prognostic factors (B2M, ASPC, BMPC and cytogenetic abnormality) and increased level of favorable one (HGB) (Table 2), which might partially contribute to longer OS in FSCN1high group. In multivariate analysis, we proved that FSCN1 can be an independent favorable prognosis factor for OS (p = 0.002, Table 3) Further investigation is required to evaluate using FSCN1 as a therapeutic target in MM.

Previous studies on FSCN2 have focused on the role of maintaining ear and eye functions [23, 38, 39]. Very little was found in the literature on the relationship between FSCN2 and tumors. In this study, we demonstrated that high expression of FSCN2 was significantly associated with favorable EFS and OS in MM (Table 1, Fig 2). We also found that B2M, LDH, cytogenetic abnormality, which were related to poor clinical outcomes in MM, showed a significant decrease in FSCN2high group compared to FSCN2low group (Table 2). To further confirm whether FSCN2 could predict prognosis independently, multivariate analysis was conducted and high expression of FSCN2 was proved to be an independent positive prognosis indicator for OS in MM (p = 0.013, Table 3). Further efforts are required to explore how FSCN2 affects the patient survival.

In conclusion, our research demonstrated that increased expression levels of FSCN1 and FSCN2 were strongly associated with longer OS and they were independent favorable prognostic factors for OS in MM. In addition, the combination of FSCN1 and FSCN2 expression was an effective prognosis predictor for both EFS and OS in MM. However, the related molecular mechanism of FSCN family in MM remains unclear and needs to be further investigated.