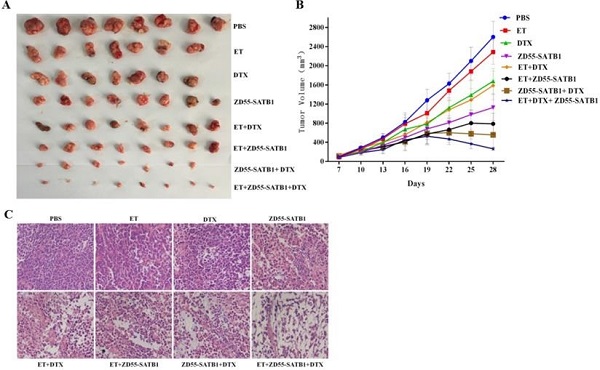 Background: Oncolytic viral therapy is a new strategy for tumor eradication which combines the advantages of viral therapy and gene therapy. Silencing SATB1 exhibits strong inhibitory effect on the growth of prostate cancer. Docetaxel (DTX) is the gold standard for chemotherapy of prostate cancer, but its side effects decrease the life quality of patients. Therefore, it is urgent to develop combination therapy to increase its anti-tumor effect.

Results: ZD55-SATB1 combined with DTX inhibited proliferation, migration and invasion of DU145 and PC-3 cells, while promoted apoptosis of DU145 and PC-3 cells more efficiently than monotherapy. ZD55-SATB1 had no cytotoxicity on WPMY-1 cells. In animal models, the combined treatment of ZD55-SATB1+DTX and endocrine therapy effectively inhibited the growth of xenograft tumor, accompanied by increased expression of caspase-3 and caspase-8, and decrease expression of Bcl-2 and angiogenesis marker CD31 compared to other treatment groups.

Conclusion: The combination of oncolytic adenovirus ZD55-SATB1 and chemotherapy provides a novel approach to effective therapy of prostate cancer.

SATB1 (special AT-rich sequence binding-protein 1) is a global chromatin organizer that could regulate gene expression and chromatin structure [5]. SATB1 is abnormally overexpressed in a variety of cancers and is proposed as an oncogene to promote tumor growth and invasion [6-10]. Therefore, SATB1 became a target for cancer therapy.

In this study, we constructed oncolytic adenovirus carrying SATB1 named as Ad-ZD55-SATB1 (ZD55-SATB1) and combined it with chemotherapeutic drug DTX to explore the effects on proliferation, invasion, and apoptosis of prostate cancer cells in vitro and in vivo.

PC-3 and DU145 cells were seeded in the top of matrigel-coated and uncoated (BD Biosciences; Bedford, MA, USA) transwell chambers (Corning, Corning, NY, USA), and the lower chamber was filled with 20% FBS in RPMI 1640 medium. After incubation for 24 h, cells that had invaded or migrated into the lower chamber were fixed in 4% paraformaldehyde and stained with crystal violet. Stained cells were counted under microscopy.

Data are shown as mean± standard deviation (SD). Comparison was performed by T-test for two groups and one-way ANOVA for multiple groups. P<0.05 was considered significant.

Epithelial mesenchymal transition (EMT) is associated with cancer invasiveness and migration. To examine whether the prostate cancer cell migration and invasion were associated with the EMT, we detected the expression of EMT related proteins, including MMP-2, vimentin and E-cadherin in PC-3 and DU145 cells. Combined ZD55-SATB1 and DTX significantly down-regulated the expression level of MMP-2, Vimentin and SATB1 and up-regulated the expressions of E-cadherin compared to ZD55-SATB1 or DTX monotherapy group (Figure 4, all P<0.05). These data suggest that combination treatment with ZD55-SATB1 and DTX inhibits prostate cancer metastasis and invasion via the inhibition of EMT.

The invasion and migration of prostate cancer cells in different treatment groups. A. Images of transwell assays with PC-3 and DU145 cells (×200). B. Quantification of invaded and migrated cells in transwell assays. Data are presented as the mean±SD (n=3). **P<0.01, ***P<0.001, versus PBS group. 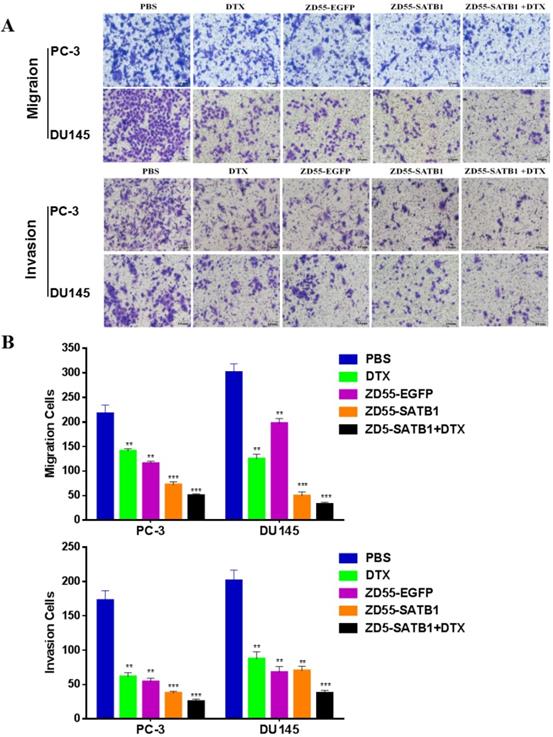 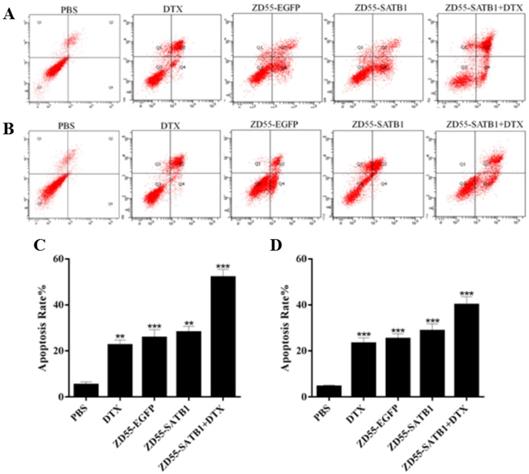 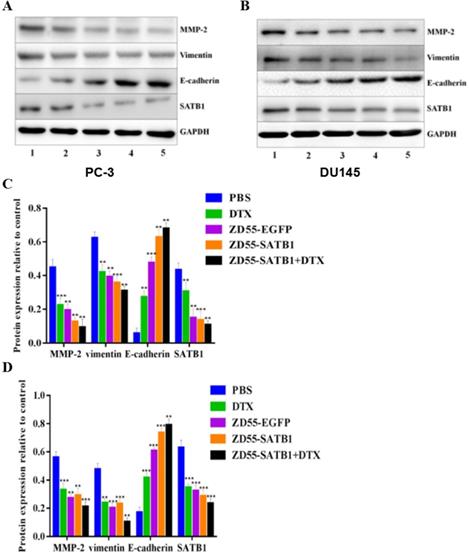 In vivo tumor growth in different treatment groups. A. PC-3 prostate tumor xenografts were harvested from each group. B. Tumor volume was measured at 3-day intervals and tumor growth curves were drawn to show growth of tumors of each group. C. H&E staining of xenografts collected from different groups of mice (×400). 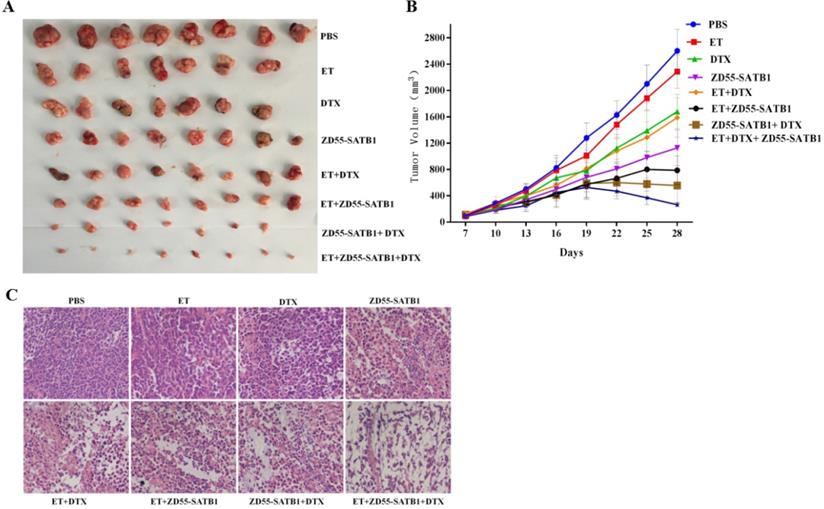 Most prostate cancers are androgen dependent and androgen deprivation therapy (ADT) becomes the preferred treatment for advanced prostate cancer. Although ADT is efficient in early treatment, most patients developed CRPC about 1-3 years after ADT [13]. DTX based chemotherapy is recommended as a first-line treatment for prostate cancer. However, side effects of DTX such as myelosuppression, fluid retention, anaphylaxis, hypotension, vomiting or diarrhea affect the life quality of patients severely [14].

In this study we combined DTX with oncolytic adenovirus carrying SATB1 (ZD55-SATB1) to enhance the efficacy of DTX and reduce the dose and possible side effects of DTX. In vitro experiments showed that combined treatment (ZD55-SATB1 plus DTX) had the highest efficacy to inhibit the viability, invasion and migration of prostate cancer cells while had no significant effect on the viability of normal prostate cells. In addition, combined treatment had the highest efficacy to induce the apoptosis of prostate cancer cells.

EMT is a crucial process in cancer invasion and metastasis [15]. E-cadherin and vimentin are both EMT related proteins, and MMP-2 plays an important role in tumor invasion and metastasis [16,17]. Thus we performed Western blot analysis to detect the expression of MMP-2, vimentin and E-cadherin in PC-3 and DU145 cells. In cells treated with ZD55-SATB1 plus DTX, the expression levels of MMP-2, vimentin and SATB1 were significantly downregulated while the expressions of E-cadherin was significantly upregulated compared to other groups. Collectively, these results indicate that ZD55-SATB1 combined with DTX may inhibit prostate cancer growth by inducing apoptosis and inhibit prostate cancer invasion and metastasis by reversing EMT.

To further validate the anti-tumor efficacy of combined treatment, we employed nude mouse model with xenograft of prostate cancer cells. Monitoring of tumor growth in nude mice showed that tumor size was the smallest in ZD55-SATB1 combined with DTX and ET group. Immunohistochemical staining showed that apoptosis related proteins exhibited the most significant changes in expression levels in ZD55-SATB1+DTX+ET group compared to other combined treatment group and monotherapy group. These results are consistent with in vitro data that combined treatment induced the apoptosis of prostate cancer cells.

This study was supported by the Project of Invigorating Health Care through Science, Technology and Education (No. CXTDA2017034). Jiangsu Provincial Medical Youth Talent (No. QNRC2016794).