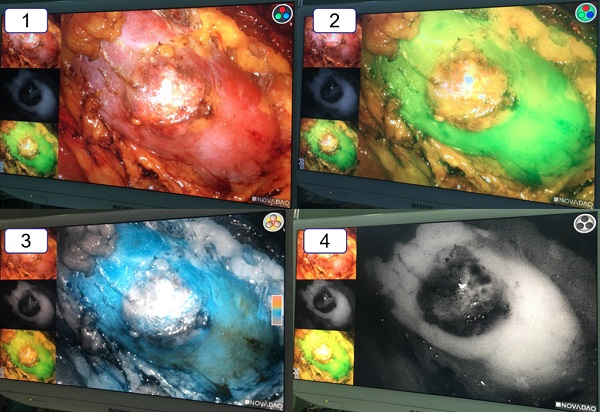 Methods: Compared with the general laparoscopic partial nephrectomy and ICG fluorescence laparoscopic partial nephrectomy, a series of indicators were analyzed: the basic information like age, sex, and the tumor location; the operative information like the time of renal ischemia, the blood loss, and the complications; and other important indexes like the renal function, the volume of the tumor, and the weight of the specimens.

Preoperative imaging examinations for renal mass mainly included contrast-enhanced computed tomography (CT) within two weeks before the operation. The R.E.N.A.L nephelometry evaluation, based on the imaging of contrast-enhanced CT, was used for representing anatomical locations of renal mass. The tumor was considered complex renal neoplasm once the R.E.N.A.L score was greater than or equal to 7.

Assessed by tumor size, location, and the relation of the tumor to vascular structures, the laparoscopic surgical approach contained trans- and retroperitoneal. Firstly, the renal pedicles were carefully isolated. Secondly, the surface of the renal tumor was exposed, and the border was identified carefully by the surgeons' eyes between the normal tissue and the tumor. Thirdly, renal ischemia was produced by renal artery occlusion using artery clips. A wedge resection of the tumor was performed with scissors. Absorbable sutures were used to close the renal incision. Fourthly, artery clips were loosened and renal color change was monitored to confirm blood reflow. In case prolonged bleeding persisted from the incision, further hemostasis was necessary by using a bipolar electric coagulator or staple the incision.

Compared with general laparoscopy, the ICG fluorescence navigation system for laparoscopic partial nephrectomy needed to use special device displays and contrast agents. We made use of PINPOINT system laparoscopic camera and device displays, which contained not only the general mode of white light but also the fluorescence mode of green light, colorful light, black and white light. And the indocyanine green (ICG) was the necessary contrast agent. The surgical procedure was following. Firstly, the renal pedicles were carefully isolated. Secondly, the surface of the renal tumor was exposed. Thirdly, approximately 20-30 seconds after intravenous injection of ICG (1 ml), the renal artery was occluded by artery clips. In the fluorescence mode, the renal tumor (only for renal clear cell carcinoma) was darker than the surrounding normal tissue. And the border was easily and immediately recognized in the light of green or black and white. The whole wedge resection of the tumor was performed under the fluorescence mode of green light. After removing the renal tumor, three lights of fluorescence mode were alternately used to ensure complete tumor resection. In the end, the renal incision was close and artery clips were loosened.

The vision of the PINPOINT system laparoscopic camera and device displays. 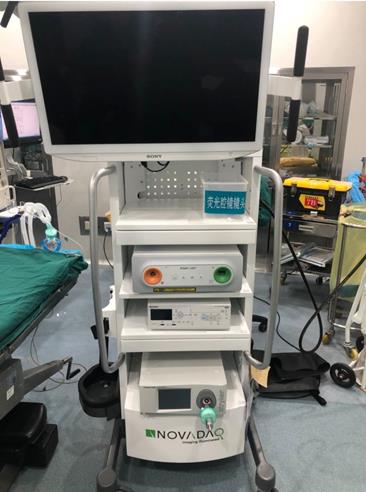 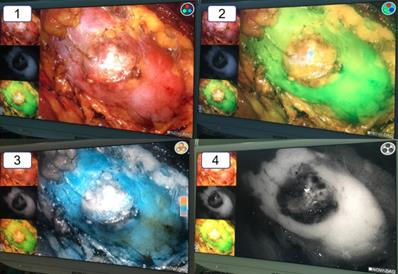 The basic variables between the two groups

The operative variables between the two groups

The functional variables and prognostic information between the two groups

For complex renal malignant tumors, partial nephrectomy still had several challenges and difficulties [8]. Juan Garisto [9] had made an in-depth contrast between robot-assisted partial nephrectomy and traditional open partial nephrectomy. Specifically, his results suggested that a significant decrease in the estimated glomerular filtration rate was observed from the preoperative to postoperative period, regardless of the approach. Several studies [10, 11] revealed that various complications associated with complex renal tumors cannot be ignored. The risk of urine leakage, renal hematomas, and surgical margins increased significantly.

To significantly decrease the rate of postoperative recurrence, the thorough removal of tumors was important. This meant that some normal tissues inevitably needed to be resected in the process of the operation. While retaining residual renal function, we attempted to remove the normal renal tissue as little as possible. The balance cannot easily be resolved for the surgeons. With the rapid development of surgical instruments, navigational aids had been a new choice for surgeons [12, 13]. At the time being, intraoperative ultrasound positioning had become widely used in clinical practice [14]. Preoperative CT three-dimensional reconstruction may be a safe and effective procedure [15]. However, the optimal surgical procedure for complex renal malignant tumors was currently unknown. From our experience, the ICG-based fluorescence navigation system could probably be the most suitable treatment.

This study got approval from our institutional ethics committee.

The medicine and health program of Zhejiang province (2021KY345); and, the public welfare projects of Huzhou Science and Technology Bureau (2020GY03).