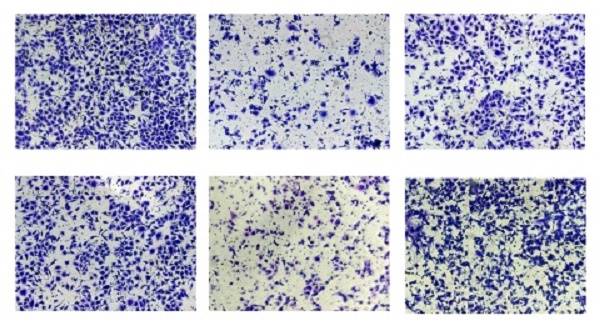 Objective: To clarify the role of LINC00665 in ovarian cancer (OC) progression and the possible mechanism.

Methods: LINC00665 levels in OC tissues and cell lines were detected by qRT-PCR. The correlation between LINC00665 and clinicopathologic characteristics of OC patients was assessed. Biological functions of OC cell phenotypes influenced by LINC00665 were examined by CCK-8, colony formation and Transwell assay. Dual-luciferase reporter assay and RIP assay were conducted to verify the interaction between LINC00665 and its downstream target.

Because of its insidious symptoms, only 20% of OC cases can be detected in early examinations [2]. Many patients have abdominal metastases before the onset of symptoms. Seriously, most OC patients are in the advanced stage when they are diagnosed for the first time. The 5-year survival of advanced OC is only 10-20% [3, 4]. Epithelial ovarian cancer (EOC) accounts for about 90% of all ovarian malignancies. In recent years, surgery combined with chemotherapy and the latest neoadjuvant chemotherapy has elevated therapeutic efficacy of OC, its recurrence rate remains high [5, 6]. Therefore, it is urgent to study the underlying mechanism of the malignant progression of OC. Seeking for biomarkers of OC helps to guide clinical treatment. LncRNAs are noncoding RNAs longer than 200 nucleotides in transcripts. A growing number of studies have shown that lncRNAs can interact with RNAs, DNAs and proteins, thereby regulating gene transcription and post-transcription [7, 8]. LncRNAs have been detected to be abnormally expressed in malignant tumors, serving either as oncogenes or tumor-suppressor genes [9, 10]. Interestingly, the number of different lncRNAs associated with OC, and consequently publications on the topic, has recently grown exponentially. Increasing studies have indicated that abnormal expressions of lncRNAs play a crucial role in the occurrence progression and treatment of ovarian cancer [11, 12]. Pan et al. [13] reported that LINC00339 was upregulated in ovarian cancer tissues and cell lines, and promoted cell proliferation, migration, and invasion of ovarian cancer via regulation of miR-148a-3p/ROCK1 axes. Zhang et al. [14] reported that the overexpression of lncRNA, MLK7-AS1, promoted ovarian cancer cell progression by modulating the miR-375/YAP1 axis. Yang et al. [15] reported that miR-200c overexpression inhibits the invasion and tumorigenicity of epithelial ovarian cancer cells by suppressing lncRNA HOTAIR in mice, suggesting that the miR-200c and lncRNA HOTAIR could be effective therapeutic targets for human epithelial ovarian cancer treatment. LINC00665 is located on chromosome 19. It is upregulated in multiple types of tumors as an oncogene. It is reported that LINC00665 is upregulated in lung carcinoma cases and correlated to a poor prognosis. LINC00665 triggers lung carcinoma progression by sponging miR-98 and thus mediates the ERK signaling [16]. In addition, LINC00665 is also involved in the progression of gastric cancer and breast cancer [17-19]. Its biological function in OC is largely unclear.

Using TCGA database and clinical tissues collected in our center, we first examined LINC00665 level in OC and its clinical significance. Later, its regulatory effects on OC cell functions in vitro were detected. Our findings revealed the important role of the LINC00665/miRNA-34a-5p/E2F3 axis in OC progression, providing novel targets for the treatment of OC.

Surgically resected EOC (n=56) and non-tumor tissues (n=56) were pathologically detected and stored in liquid nitrogen. Patients did not have preoperative adjuvant therapy. We recorded clinical data of them for analysis (Table 1). Collection of samples for experimental use was informed consent and approved by the Ethic Committee of Suzhou TCM Hospital Affiliated to Nanjing University of Chinese Medicine.

Association of LINC00665 expression with clinicopathologic characteristics of ovarian cancer

Tissue or cell samples were processed by TRIzol for isolating RNAs. After purification, qualified RNAs were reversely transcribed to cDNAs and subjected to qRT-PCR using SYBR®Premix Ex Taq™ (Takara, Japan). Relative levels of PCR products were calculated by 2-ΔΔCt and normalized to that of GAPDH using the StepOne Plus Real-Time PCR system (ABI, USA). Primer sequences were listed as follows.

Cells were seeded in a 96-well plate with 2×103 cells suspended in 200 μL of medium per well. They were induced with 10 μl of CCK-8 solution per well at the indicated time points. After cell culture in the dark for 2 h, absorbance at 490 nm was detected for plotting cell viability curves.

Cells in a 6-well plate with 1×103 cells/well were cultured for 10 days. Colonies were then fixed, dyed and captured for counting.

Serum-free suspension (2×105 cells /ml) was seeded in a Transwell chamber either pre-coated with Matrigel or not. Serum-contained medium was added to the bottom as an inducer. After 24-h cell culture, cells penerated to the bottom were fixed, and dyed in 0.2% crystal violet. They were captured in 5 random fields per well for cell counting.

SPSS 22.0 was used for statistical analysis. Differences between groups were compared by the t-test. Kaplan-Meier method was introduced for survival analysis, followed by log-rank test. Correlation between expression levels of two genes was assessed by Pearson correlation test. P < 0.05 was considered as statistically significant.

LINC00665 was upregulated in OC and correlated with poor prognosis

Using TCGA database, it is found that LINC00665 was upregulated in OC tissues than controls (Figure 1A), which was validated by detecting LINC00665 level in clinical samples of OC in our center (Figure 1D). Compared with ovarian epithelial cells, LINC00665 was highly expressed in OC cell lines (Figure 1E). Subsequently, as data revealed in Kaplan-Meier Plotter, LINC00665 was correlated to overall survival and progression-free survival of OC (Figure 1B, C). To further analyze the clinical significance of LINC00665 in OC, recruited patients were divided to two groups based on the median level of LINC00665 in corresponding cancer tissues. Survival analysis showed that high level of LINC00665 was unfavorable to the survival of OC (Figure 1F). Moreover, LINC00665 level was correlated to tumor size, FIGO stage and lymph node metastasis, rather than the age, histological grade, pathological subtype and CA125 level (Table 1). It is concluded that LINC00665 was upregulated in OC and correlated to the prognosis.

We constructed LINC00665 knockdown model in SKOV3 and CAOV3 cells by lentivirus transfection, and its intervention efficacy was examined by qRT-PCR (Figure 2A). Among the three lines of sh-LINC00665, sh-LINC00665-2 displayed the highest efficacy, and it was used in the following experiments. CCK-8 and colony formation assay obtained the finding that knockdown of LINC00665 reduced proliferative rate in SKOV3 and CAOV3 cells (Figure 2B, C). Besides, migratory and invasive rates of OC cells were declined after transfection of sh-LINC00665-2 (Figure 2D, E).

LINC00665 binds to miRNA-34a-5p and negatively regulates its level 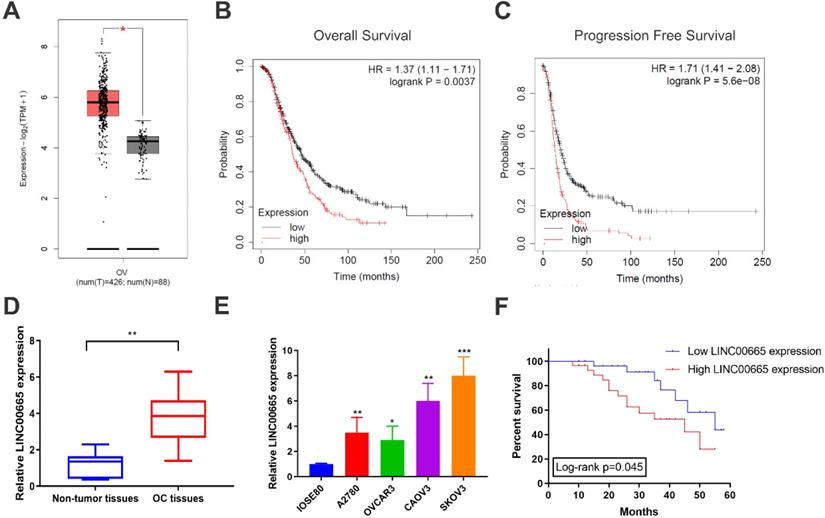 By comprehensively analyzing online databases (TargetScan, miRDB and Starbase), E2F3 was predicted to be the downstream gene of miRNA-34a-5p, which was further verified by dual-luciferase reporter assay (Figure 4A, B). Both mRNA and protein levels of E2F3 were downregulated in SKOV3 and CAOV3 cells overexpressing miRNA-34a-5p (Figure 4C, D). To further clarify the interaction in the LINC00665/miRNA-34a-5p/E2F3 axis, we analyzed E2F3 level in OC tissues in TCGA, and the results showed that E2F3 was upregulated (Figure 4E). Moreover, E2F3 level was positively correlated with that of LINC00665 (Figure 4F). Protein level of E2F3 was downregulated by knockdown of LINC00665, while it was reversed by knockdown of miRNA-34a-5p (Figure 4G). Hence, LINC00665 upregulated E2F3 by sponging miRNA-34a-5p. 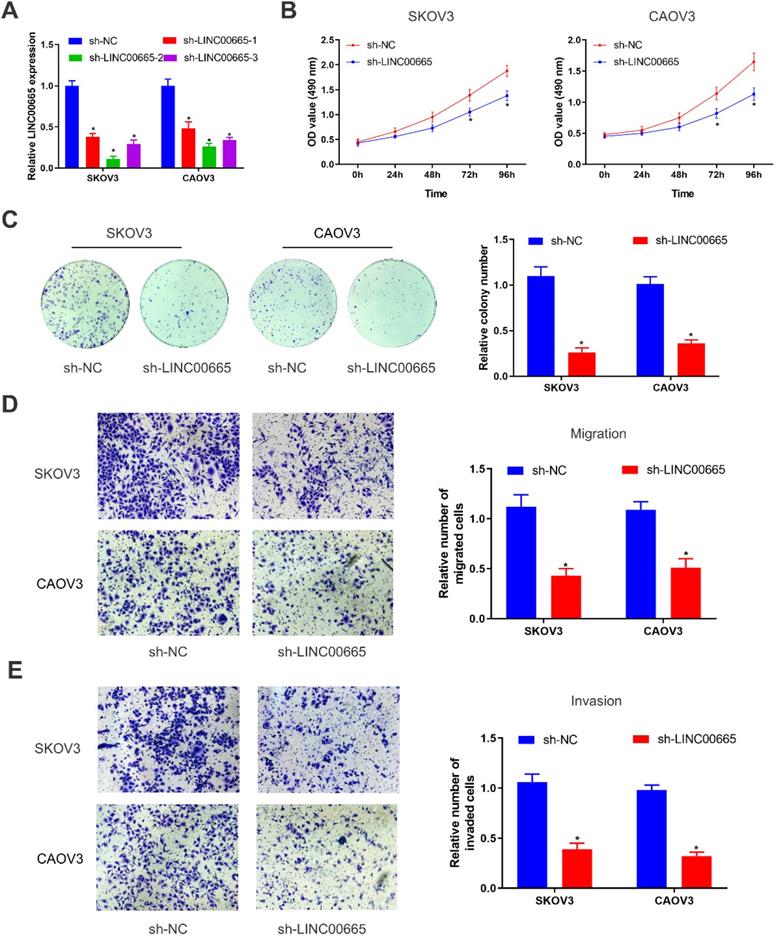 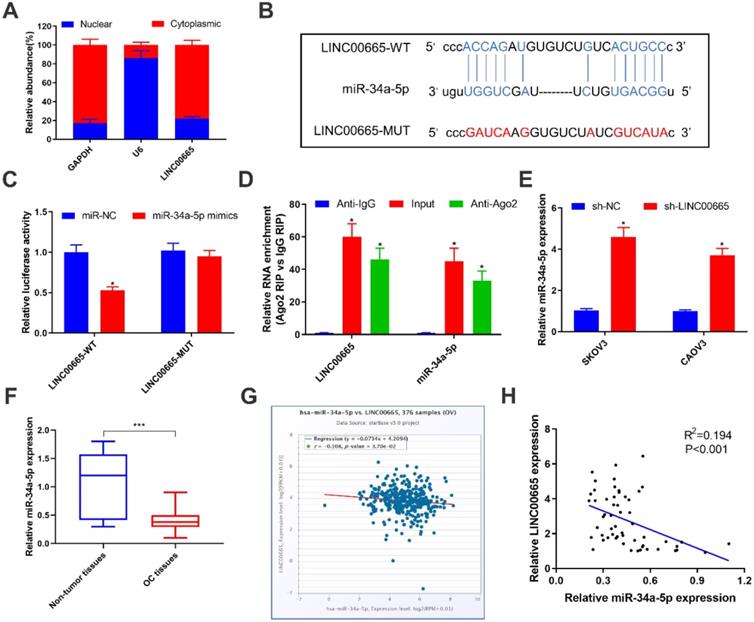 With the development of high-throughput sequencing, dysfunctional lncRNAs are believed as key events for tumor development [21]. Recent studies have shown that LINC00665 exerts a carcinogenic role in many types of tumors [17-19].

Our results revealed that LINC00665 was upregulated in OC tissues, which was validated in online analysis using TCGA database. Clinical data of recruited OC patients were retrospectively reviewed and it is shown that LINC00665 was correlated to tumor size, FIGO stage and lymph node metastasis of OC. High level of LINC00665 predicted a poor survival of OC patients. In vitro evidences demonstrated that knockdown of LINC00665 weakened proliferative, migratory and invasive capacities of OC cells.

LncRNAs can regulate gene transcription, post-transcription and translation depending on their intracellular location [22]. MALAT1 is mainly located in the paraspeckle of cell nuclei, where RNA is spliced and modified, suggesting that MALAT1 is able to mediate alternative splicing of precursor mRNAs [23]. LINC00665 was mostly expressed in the cytoplasm. We therefore speculated that LINC00665 could be a modifier for post-transcriptional regulation. Through competitively binding target miRNAs and therefore influencing the binding between miRNAs and the downstream genes, lncRNAs display their biological functions, that is, the ceRNA theory [24]. Ji et al. [25] reported that LINC00665 drives breast cancer progression by sponging miR-379-5p and upregulating LIN28B. In the present study, miRNA-34a-5p was confirmed to be sponged by LINC00665 in OC cells, and a negative correlation between their levels was identified.

LINC00665 regulated E2F3 by absorbing miR-34a-5p. (A) The putative binding sequence sites in E2F3 with miR-34a-5p. The red color-highlighted sequence was the mutated site in E2F3. (B) Dual luciferase reporter assay was performed to validate the interaction between miR-34a-5p and E2F3 in SKOV3 cells. (C, D) Expression of E2F3 in SKOV3 and CAOV3 cells transfected with miR-NC or miR-34a-5p mimics was determined by qRT-PCR (C) and Western Blot (D). (E) E2F3 was highly expressed in ovarian cancer tissues compared to normal tissues in TCGA database. (F) Positive correlation was observed between LINC00665 and E2F3 in ovarian cancer tissues according to TCGA database. (G) E2F3 protein expression in SKOV3 and CAOV3 cells transfected with sh-NC, sh-LINC00665 or sh-LINC00665+ miR-34a-5p inhibitors was determined by Western Blot. (* p<0.05) 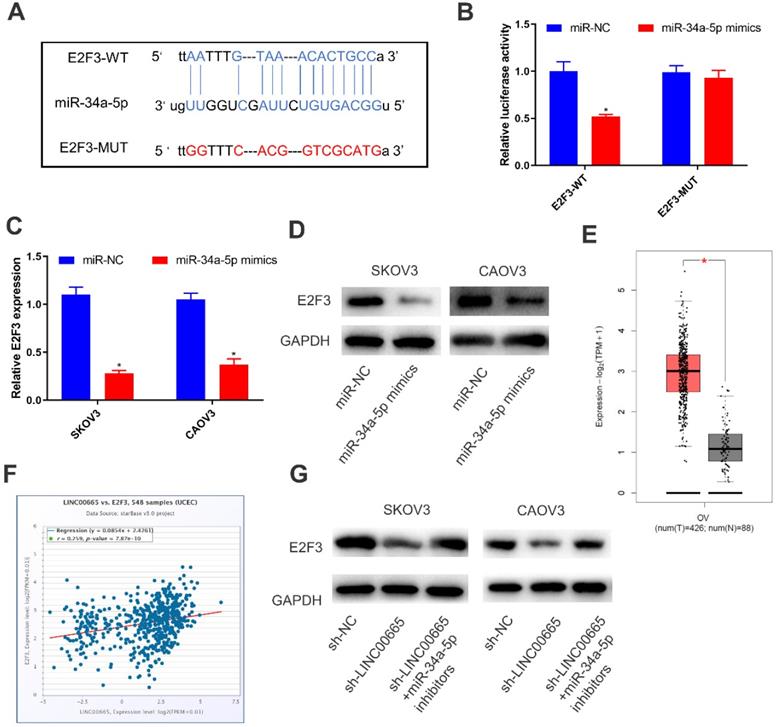 MiRNAs are promising diagnostic and prognostic biomarkers of OC [26]. Previous studies have shown that miRNA-34a-5p is downregulated in multiple types of tumors [27, 28]. MiRNA-34a-5p is capable of inhibiting proliferative function and reducing cisplatin resistance in OC cells [29]. Here, E2F3 was proven to be the downstream gene of miRNA-34a-5p, which is a member of the E2F family displaying an oncogenic role [30]. E2F3 level was positively correlated to LINC00665 level in OC tissues. As a result, the LINC00665/miRNA-34a-5p/E2F3 axis was ascertained. Rescue experiments obtained the results that miRNA-34a-5p could reverse the regulatory effects of LINC00665 on OC cell functions. Collectively, LINC00665 promoted OC progression by the miRNA-34a-5p/E2F3 axis.

LINC00665 is upregulated in OC cases and predicts a poor prognosis. LINC00665/miRNA-34a-5p/E2F3 axis is involved in OC progression, providing novel insights into the clinical treatment of OC. 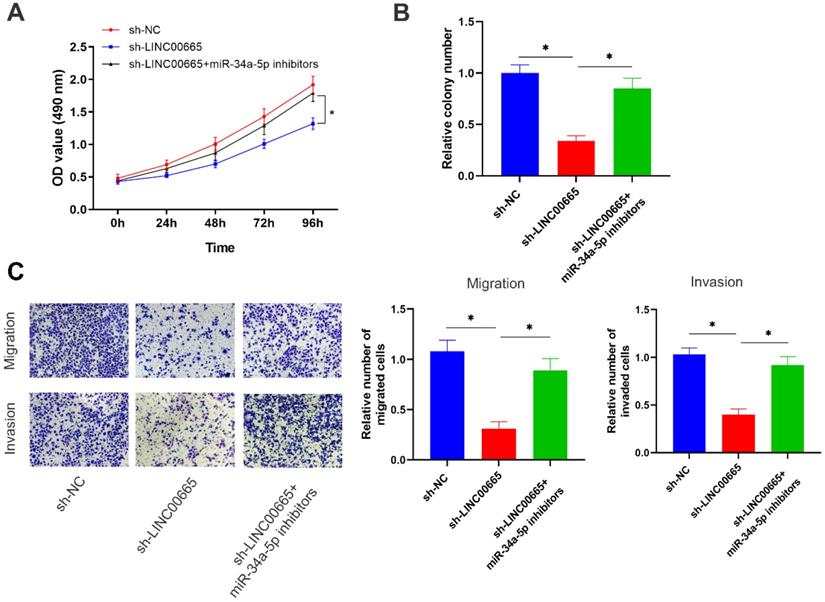 23. Hochberg-Laufer H, Neufeld N, Brody Y. et al. Availability of splicing factors in the nucleoplasm can regulate the release of mRNA from the gene after transcription. PLoS Genet. 2019;15:e1008459