Methods: Using the Surveillance, Epidemiology, and End Results registry (SEER), we identified 1529 and 4070 patients with stage IA SQCC and AD, respectively, who had complete clinical information between 2004 and 2015. We used Kaplan-Meier analysis to determine the propensity score for patients with limited resection based on the preoperative characteristics of patients. Lung cancer-specific survival (LCSS) was compared in patients treated with WR and SG after adjusting, stratifying, or matching lung cancer patients according to propensity score.

Limited resection methods include wedge resection (WR) and segmentectomy (SG). SG, as an anatomic resection, has been thought as a preferred approach compared to WR in patients with stage IA NSCLC [15]. However, due to the quality of life in patients receiving SG was not as good as patients undergoing WR [16, 17], the option of WR or SG should be more cautious for patients. Previous studies have compared survival rates between the two types of limited resection primarily based on variables such as tumor size, differentiation grade, age, and so on, but less on the pathology subtypes of NSCLC. This study was to compare survival outcomes of WR and SG by comparing with lung cancer-specific survival (LCSS) in patients with stage IA lung squamous cell carcinoma (SQCC) or lung adenocarcinoma (AD), the major pathology subtypes of NSCLC.

This retrospective study was conducted to assess the relationship between two types of limited resection and the survival rate in patients with IA stage SQCC or AD, using data from the Surveillance, Epidemiology, and End Results (SEER) database. The SEER project is maintained by the National Cancer Institute in the United States (US). SEER includes a population-based cancer registry, established in 1973, which accounts for approximately 10% of the US population [18].

We limited the cohort to patients with stage IA SQCC or AD (≤3 cm in tumor size) diagnosed between 2004 and 2015. All included patients underwent WR or SG; the complete information of all included patients was available in the SEER database. Figure 1 shows a flow chart of the literature search for analyses based on the SEER database. Initially, 68,282 patients with IA stage lung cancer were identified. A total 66,312 patients with NSCLC were included, after excluding the following patients: 1,185 patients with small cell lung cancer, 66 with carcinoma not otherwise specified (NOS), 179 with large cell carcinoma, 371 with adenosquamous carcinoma and 169 patients with other cancers. We included 21,385 patients with NSCLC who were treated surgically, after excluding the following patients: 191 patients who underwent unknown surgery; 23,493 with no surgery; 9 with local tumor destruction or excision NOS; 120 with surgery NOS; 509 with laser ablation, cryosurgery, or radiofrequency ablation; 20,459 who underwent lobectomy with mediastinal lymph node dissection, plus pleura or diaphragm; and 146 patients with excision or resection of less than one lobe NOS. Finally, a total of 5,599 patients with stage IA SQCC or AD who were treated with limited resection were included in the analysis, after excluding 15,786 patients with NA not the first tumor.

Classification variables were compared using the Pearson's chi-squared test. Kaplan-Meier analysis and the log-rank test were used to compare survival between the WR group and the SG group. Propensity score methods were used to control the potential differences in baseline characteristics of the included patients. Cox regression was performed to assess whether the baseline covariates of the two groups were balanced after adjusting for the estimated propensity scores. Statistical significance was set at a two-tailed P value <0.05. Data were analyzed using IBM SPSS version 20.0 (IBM Corp, Armonk, NY, USA).

Subsequent analysis using a Cox model, which included above seven significant covariates, showed that there were no statistically significant differences for histologic type (P=0.263) in patients with stage IA SQCC or AD. However, there were statistically significant differences for age (P<0.001), sex (P<0.001), tumor size (P<0.001), differentiation grade (P<0.001), radiotherapy (P<0.001), chemotherapy (P<0.001), and resection (P=0.013) (Table 2). These outcomes demonstrate that the prognoses of patients with stage IA SQCC or AD are related to the followed factors: age, sex, tumor size, differentiation grade, radiotherapy, chemotherapy, and limited resection, but are not related to these factors: tumor location, marital status and laterality.

Comparison of survival curves between WR and SG 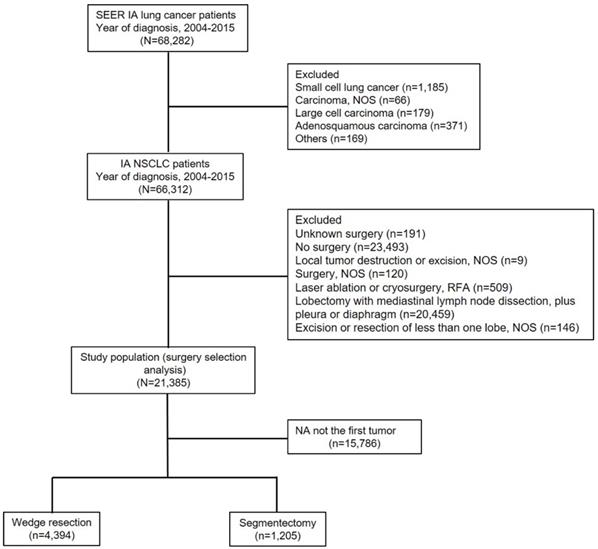 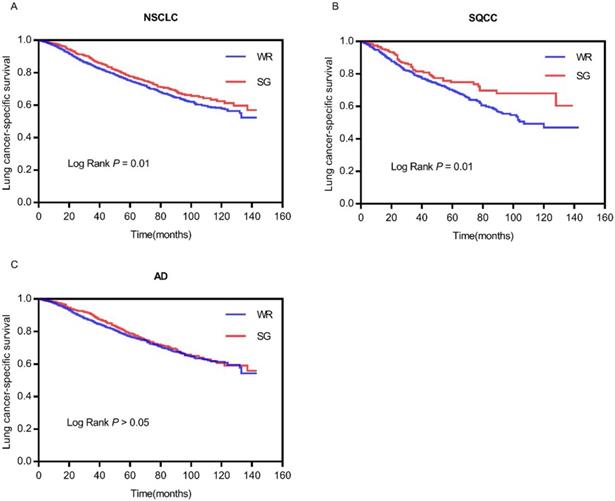 Currently, with advances in radiology and the emergence of lung cancer screening programs, a higher incidence of early stage NSCLC has been observed. In this scenario, limited resection has been adopted as an effective treatment for stage IA NSCLC patients, especially in the elderly and patients with pulmonary insufficiency. Over the past decade, SG has become more common and played an increasingly important role in the treatment of pulmonary metastases. It is technically difficult for anatomic SG which not only demands a thorough understanding of the pulmonary anatomy, but also requires in-depth tomographic study of the location of the pulmonary nodules. Persistent pneumothorax (over five days) is the most common complication of SG, which occurs between 8% and 10% [19]. Therefore, the nodules must be well positioned to ensure safe resection. WR has been considered "inferior" cancer operation for nearly two decades, but much of the contemporary literature is contradictory and inconclusive. Several recent studies have shown that WR is even equivalent to lobectomy [20-22]. There is enough controversy to avoid overly dogmatic statements about the poor quality of WR in the absence of modern large-scale prospective trials. Instead, the surgeon should place the emphasis on the quality of the operation and ensure the most possible excision of margin when WR is required. Performed well, WR is maybe an appropriate surgical option.

Admittedly, there are some limitations in our study, mainly owing to its retrospective design. For example, the lack of original datum from our own studies as well as validation for main findings and conclusion. In addition, the SEER database does not include some important information, such as the types of therapy, histological subtypes, and gene mutations. This information should be included in future prospective studies. Nevertheless, with the inclusion of 12 variables and nearly 5,600 patients in our cohort, the present study represents a well-balanced analysis of SG and WR surgical methods. Thus, in the absence of data from prospective trials, our findings can provide information that is useful for the management of patients with stage IA SQCC and AD.

In summary, the prognosis of patients with stage IA NSCLC is related to a variety of factors.

According to the development trend of modern medicine, there must be a personalized surgical approach which should take into account the characteristics of each patient, the imaging characteristics of tumor as well as the impact on the quality of life and surgical recovery in the future. This study indicates that SG is superior to WR in patients with stage IA SQCC, but the survival outcomes of SG and WR are generally equivalent in patients with stage IA AD. The result may provide a basis for individualized surgical option for stage IA AD patients.

We would like to thank all the staff of the National Cancer Institute for their efforts in the SEER program.

All procedures performed in studies involving human participants were in accordance with the ethical standards of the institutional and/or national research committee and with the 1964 Declaration of Helsinki and its later amendments or comparable ethical standards. For this type of study, formal consent is waived.