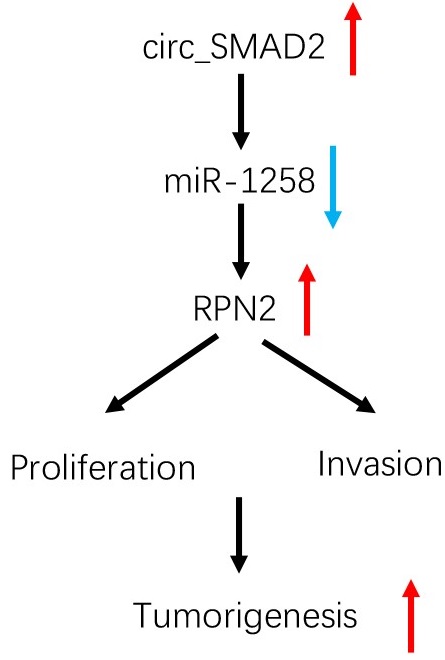 Circular RNAs (circRNAs) are associated with various diseases, including cancers. However, their roles in colorectal cancer (CRC) have not been established. Hsa_circ_0000847 (circ_SMAD2) is a novel circRNA that was found to be elevated in CRC cell lines and tissues. High circ_SMAD2 levels were positively correlated with CRC clinicopathological features. Functional assays revealed that circ_SMAD2 enhanced CRC cell invasion, proliferation, and tumor growth. Mechanistically, circ_SMAD2 elevated Ribophorin II (RPN2) levels by inhibiting miR-1258. Therefore, circ_SMAD2 is a potential indicator for CRC progression.

Globally, colorectal cancer (CRC) is the 3rd most common malignancy. It is highly associated with cancer related mortalities [1, 2]. Therapeutic options for CRC include surgical resection, radiotherapy, chemotherapy, and vital adjuvant treatment. These options significantly improve survival outcomes [3, 4]. However, the 5-year survival of patients with distal metastasis is low (12.5%) [5]. To identify novel biomarkers and therapeutic targets for CRC, more studies aimed at elucidating its molecular basis are needed.

Circular RNAs (circRNAs) modulate multiple biological processes in CRC [6, 7]. Ge et al reported that down-regulation of circMTO1 suppresses the proliferative and invasive abilities of CRC through the Wnt/beta-catenin signaling pathway [8]. In addition, circITGA7 inhibits CRC cell proliferation and metastasis by suppressing the Ras signaling pathway while enhancing ITGA7 expression [9]. Elevated hsa_circ_0136666 levels promote the invasion and proliferation of CRC by molecularly sponging miR‐136 [10]. However, the roles of hsa_circ_0000847 (circ_SMAD2) in the progression of CRC have not been established. circ_SMAD2 have been shown to be elevated in CRC, therefore, we hypothesized that circ_SMAD2 may be oncogenic.

miRNAs promote CRC development and progression [11]. Li et al documented that miR-205 suppresses CRC metastasis by targeting CREB1 [12]. The down-regulation of miR-143 in CRC has been shown to suppress cell progression by regulating the expression of MMP7 [13]. miR-1258 is significantly down-regulated in CRC [14, 15]. However, the relationships between circ_SMAD2 and miR-1258 have not been determined.

This study aimed at determining the roles of circ_SMAD2 in CRC progression and metastasis, as well as its mechanism of action.

This study was approved by the ethical committee of Henan Provincial People's Hospital. The participants who agreed to be enrolled in this study were required to sign an informed consent. A total of 53 pairs of CRC tissue and adjacent normal tissue (ANT) specimens were collected between 2015 and 2016. Before the surgical procedures, none of the study participants had undergone radiotherapy, chemotherapy, or targeted therapy. After surgical resection, the specimens were immediately frozen in liquid nitrogen.

Anti circ_SMAD2 siRNA, miR-1258 mimics, pcDNA3.1/RPN2 and corresponding controls were offered by Shanghai GenePharma Co., Ltd. The Lipofectamine 3000 reagent (Invitrogen) was added to facilitate transfection as per the manufacturer's instructions.

miRNeasy Mini Kit (Qiagen) was employed for RNA isolation. After treatment with DNase I (Sigma), total RNA was quantified at the ratio of A260/A280. Total RNA was reversely transcribed into cDNA using SuperScript VILO reagent kit (Invitrogen) or miScripIIRT kit (Qiagen). The synthesized cDNA was used for qRT-PCR with the SYBR Green PCR Master Mix (Vazyme, Nanjing, China). The relative expression was analyzed by the 2-ΔΔCt method. Primers: circ_SMAD2-F: 5'-TATTCCAGAAACGCCACCTCC-3', circ_SMAD2-R: 5'- GCAAGCCACGCTAGGAAAAC-3', GAPDH or U6 served was used as an internal.

Cells were seeded in 96-well plates (2×103 cells/well) and allowed to adhere. 10μL of Cell Counting Kit-8 solution (CCK-8, Dojindo, Japan) were added into each well and cultured for 2 h. Optical density was recorded at 450nm by a microplate reader. Proliferation rates were measured at 24, 48, 72 and 96 h after transfection.

The transfected cells were dissociated with trypsin and twice rinsed with PBS 1X. Cells were then fixed in 70% ethanol at 4 °C overnight. Cell cycle analyses were done using a FACS Calibur flow cytometer (BD Biosciences) after propidium iodide (PI) staining for 30 min in the presence of RNase A (KeyGEN Biotech, Nanjing, China).

After transfection, cells were cultured in 6-well plates for 2 weeks in media containing 10% FBS. They were fixed in methanol and stained with 0.5% crystal violet. The number of colonies formed were then counted.

Circ_SMAD2 or RPN2 3'UTR with binding sites for wild-type or mutant miR-1258, were cloned into pmirGLO vector (Promega) and named WT-circ_SMAD2, MUT- circ_SMAD2, WT-RPN2 or MUT-RPN2. The corresponding luciferase reporter and miR-1258, or miR-NC, were co-transfected into the CRC cells. Luciferase activity was measured using a dual-luciferase reporter system (Gene, China).

All these assays were performed as previously described [16, 17].

Circ_SMAD2 is significantly upregulated in CRC

Hsa_circ_0000847 is located on chromosome 18, and is comprised of exon 2-5 of its host gene, SMAD2 (Figure 2A). Circ_SMAD2 was found to be resistant to RNase R digestion (Figure 2B). The amplification of circ_SMAD2 with divergent primers revealed its amplification in cDNA, but not in gDNA (Figure 2C). Additionally, circ_SMAD2 was shown to be mainly localized in the cytoplasmic fraction. However, it was also present in the nuclear fraction (Figure 2D). 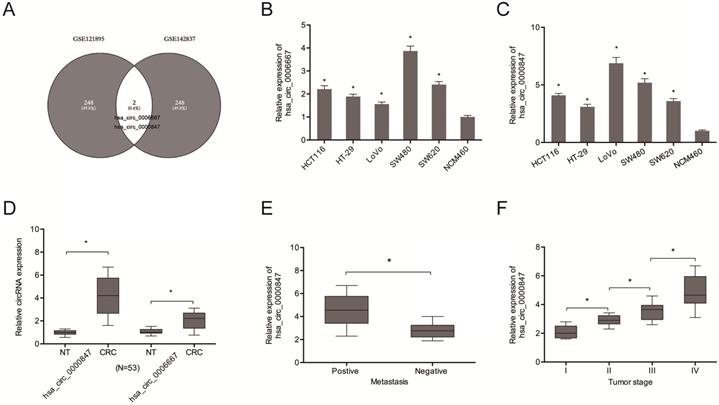 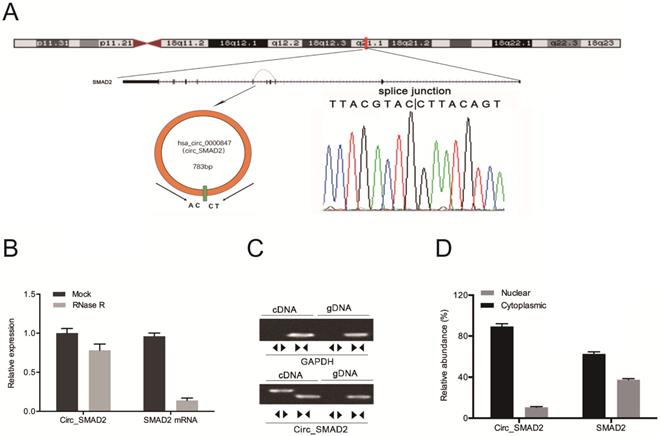 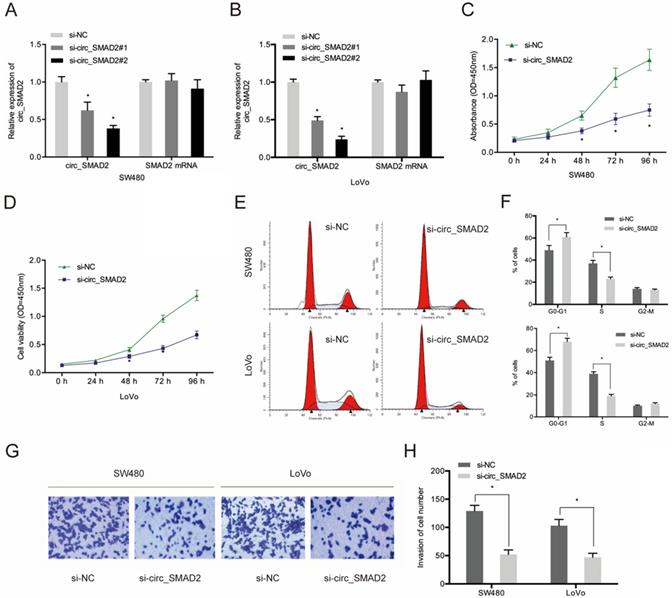 Circ_SMAD2 interacts with miR-1258. (A) The overlapping miRNAs from 2 online analysis tools (circbank and circInteractome). (B) The relative levels of 5 miRNA in TCGA database. (C, D) The relative levels of 5 miRNA candidates in the CRC cells lysates were detected by qRT-PCR. (E, F) Luciferase reporter assay was conducted to evaluate the interaction ability between circ_SMAD2 and miR-1258. (G) RNA FISH for circ_SMAD2 and miR-1258 was detected in CRC cells. (H) silencing of circ_SMAD2 increased the expression of miR-1258 in CRC cell lines. *p<0.05 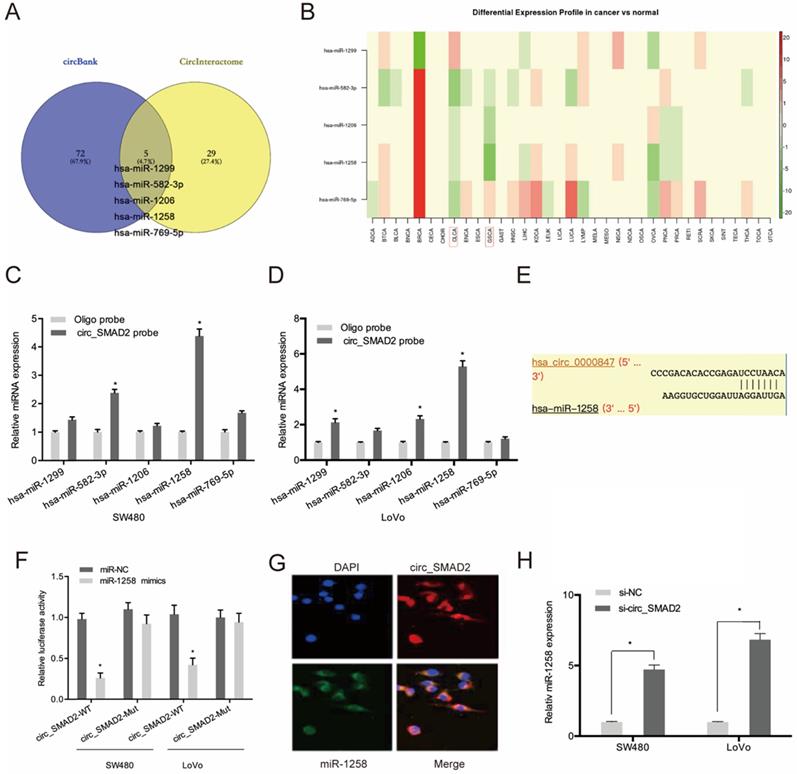 To evaluate the mechanisms of circ_SMAD2 activity in CRC, circ_SMAD2 binding to miRNA was analyzed. Circbank and circInteractome analysis predicted 5 miRNAs (hsa-miR-1299, hsa-miR-582-3p, hsa-miR-1206, hsa-miR-1258, and hsa-miR-769-5p) that are potential circ_SMAD2 targets. The expression of these miRNAs was evaluated in the TCGA datasets (Figure 4A-B). The RNA pulldown analysis of whether these miRNAs physically interacted with circ_SMAD2 revealed the enrichment of miR-1258 in the circ_SMAD2 pull-down (Figure 4C-D). Figure 4E-F shows that miR-1258 significantly suppressed the luciferase activity of the WT-circ_0000847 reporter. RNA-FISH analysis confirmed the colocalization of circ_SMAD2/miR-1258 in the cytoplasm (Figure 4G). Furthermore, circ_SMAD2 silencing elevated miR-1258 expression in the CRC cell lines (Figure 4H). 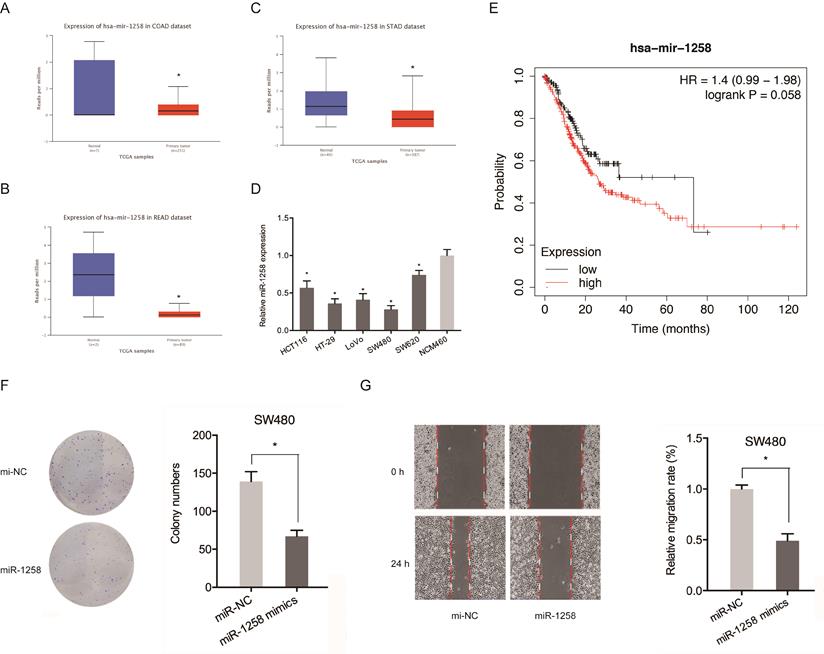 RPN2 is a downstream target gene of miR-1258 in CRC. (A) The overlapping miRNAs from 4 online analysis tools. (B) The binding site of miR-1258 to RPN2. (C) The relationship of miR-1258 and RPN2 was proved by luciferase reporter assay. (D) The RPN2 expression in TCGA dataset. (E) Relative expression of RPN2 in CRC tissues by IHC. (F) Kaplan-Meier analysis of overall survival based on RPN2 expression in CRC patients. (G) miR-1258 overexpression reduced RPN2 levels in CRC cells. *p<0.05. 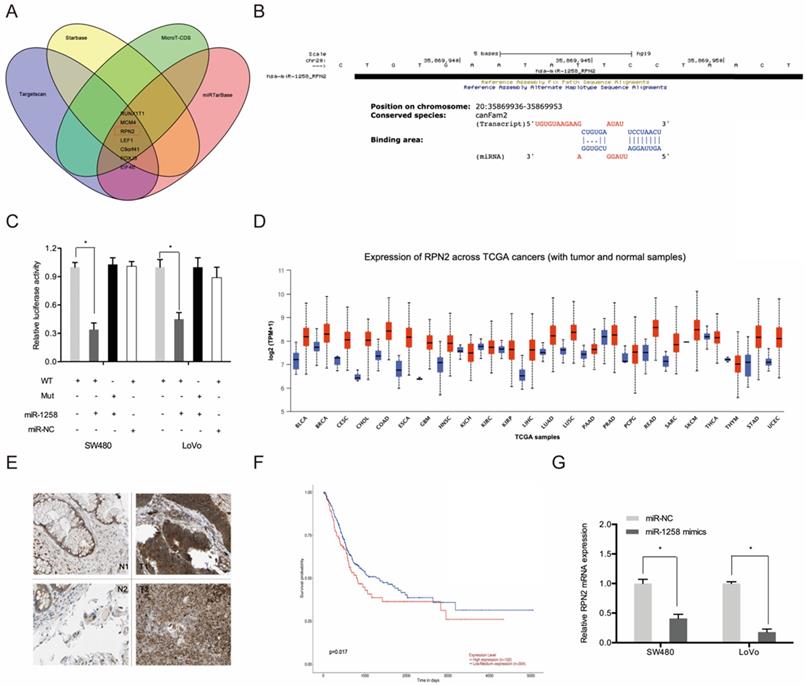 Recent developments in high-throughput sequencing technology have generated a lot of interest in the role of circRNAs in cancer [18]. CircRNAs influence tumorigenesis by modulating various biological processes, including glycolysis, metastasis, and cell cycle [19]. In hypoxic conditions, circ_MAT2B promotes liver cancer glycolysis and malignancy through the miR-338-3p-PKM2 axis [20]. In addition, circRNA_0025202 regulates tamoxifen sensitivity in breast cancer by targeting the miR-182-5p-FOXO3a axis [21]. The circ100284-miR-217-EZH2 axis influences arsenite-accelerated cell cycle in human keratinocytes during carcinogenesis [22]. In this study, hsa_circ_0000847 (circ_SMAD2), a novel circRNA, was found to be markedly upregulated in CRC tissues and cell lines. Elevated circ_SMAD2 levels were correlated with advanced clinical features and poor CRC prognosis. Moreover, circ_SMAD2 knockdown significantly suppressed the in vitro proliferative and invasive rates of CRC cells and reduced the tumor growth in vivo, suggesting that circ_SMAD2 influences CRC progression. 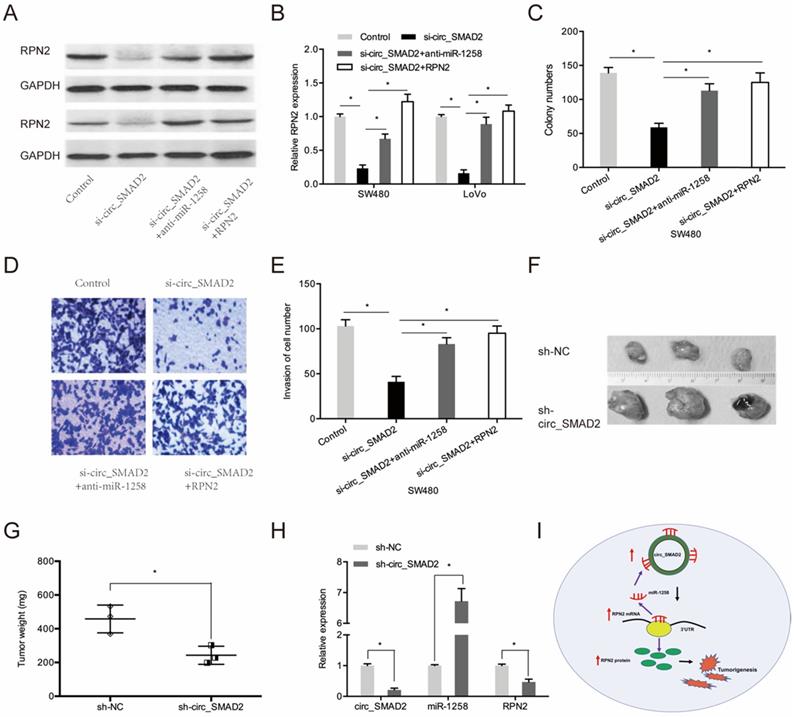 Ribophorin II (RPN2) is an endoplasmic reticulum glycoprotein that modulates cell functions and signal transductions [26, 27]. Elevated RPN2 levels have been documented to exhibit oncogenic functions in various cancers. Down-regulated RPN2 levels have been correlated with enhanced esophageal squamous cell carcinoma responses to docetaxel [28]. RPN2 promotes liver cancer metastasis and reduces autophagy by regulating STAT3 and NF-κB signaling pathways [29]. The in vitro invasive and proliferative abilities of colon carcinoma cells are hampered by the down-regulation of RPN2 [30]. However, the role of RPN2 in CRC progression has not been established. In this study, elevated RPN2 levels in CRC patients confirmed that RPN2 is a downstream target of miR-1258 in CRC cells. The overexpression of RPN2 reverses the effects of circ_SMAD2 silencing in CRC cells. This implies that circ_SMAD2/miR-1258/RPN2 is involved in CRC progression.

In conclusion, up-regulated circ_SMAD2 levels are associated with invasion and poor prognosis of CRC. In addition, circ_SMAD2 enhances malignancy by targeting miR-1258 to upregulate RPN2 expression in CRC. This is a potential therapeutic avenue against CRC.