Long non-coding RNAs (lncRNAs) play a pivotal role in the genesis and development of cancer. The role and molecular mechanisms of SNHG25 in epithelial ovarian cancer (EOC) have not been investigated. In the present study, we showed that SNHG25 expression was up-regulated in EOC tissues relative to normal ovarian tissues. In vitro, functional experiments demonstrated that high expression of SNHG25 promoted proliferation, migration and invasion, and decreased apoptosis, in ovarian cancer cell lines. In vivo, downregulation of SNHG25 inhibited the growth (tumor volume) of subcutaneous xenografts in nude mice. High-throughput sequencing and western blot analysis showed a significant decrease in the expression of COMP mRNA and protein in SNHG25 knockdown compared to control ovarian cancer cells. These data suggest that SNHG25 promotes EOC progression by regulating COMP, serving as a potential biomarker for EOC.

Epithelial ovarian cancer (EOC) is a leading cause of cancer-related mortality [1]. Most patients present with advanced disease, when the 5-year overall survival rate is < 30% [2, 3]. Diagnosis of early stage EOC is challenging as the disease causes few specific symptoms when it is localized to the ovary [4, 5]. The majority of patients with ovarian cancer respond to surgery and chemotherapy; however, recurrence rates are high and prognosis is poor, especially for patients with advanced disease [6]. Further understanding of the molecular mechanisms underlying EOC tumor biology is required to develop novel targeted treatment strategies [7].

Recently, the lncRNA small nucleolar RNA host gene (SNHG) family has been implicated in several cancers. SNHG4 high expression was associated with tumor size and poor prognosis in patients with osteosarcoma [16]. SNHG15 was identified as a potential prognostic marker and therapeutic target in hepatocellular carcinoma (HCC) [18]. SNHG25, located in 17q23.3, is a novel lncRNA in ovarian cancer retrieved from The Cancer Genome Atlas (TCGA) (https://cancergenome.nih.gov). To the authors' knowledge, the role and molecular mechanisms of SNHG25 in ovarian cancer have not been investigated.

In this study, we conducted a series of in vitro and in vivo assays to clarify the roles and mechanisms of SNHG25 in EOC progression. Findings suggest that SNHG25 is involved in EOC proliferation and metastasis, indicating that SNHG25 may be a viable biomarker for EOC.

This study included 30 ovarian cancer tissue samples and 30 normal ovarian tissue samples collected from patients attending the Department of Obstetrics and Gynecology in the Second Affiliated Hospital of Nantong University between January 2017 and December 2018. Ovarian cancer tissue samples were confirmed as EOC by postoperative pathology. No patient received therapy before surgery. Normal ovarian tissue samples were collected from patients with uterine myoma who underwent uterine and ovarian resection. Fresh samples were snap-frozen and stored at -80 °C until use. This study was approved by the Ethical Committee of the Second Affiliated Hospital of Nantong University.

Parameters were: pre-denaturation at 95 °C for 10 min for 1 cycle, denaturation at 95 °C for 30 s, annealing at 60 °C for 1 min, and extension at 60 °C for 30 s for a total of 40 cycles. The house keeping gene GAPDH (glyceraldehyde-3-phosphate dehydrogenase) was used as an internal control. The fold change in the expression of target genes was calculated with the 2-ΔΔCT method.

Cell proliferation was assessed using the Cell Counting Kit 8 (CCK-8; Medchem Express), according to the manufacturer's instructions. Transfected cells in the logarithmic growth phase were seeded in triplicate in a 96-well plate at 5000 cells/well. Cells were incubated overnight at 37 °C and 5% CO2. Cells were cultured with 100 μl of medium and 10 μl of CCK-8 for 1h. Absorbance of each well was measured at 450 nm at 0h, 24h, 48h, 72h, and 96h using a microplate reader (Tecan, Mechelen, Belgium).

Cell proliferation was further investigated using the colony formation assay. Transfected cells were seeded in triplicate in medium plates at 3000 cells/plate, incubated for 2 weeks, washed with PBS, fixed with 4% paraformaldehyde for 2h, and stained with crystal violet for 1h. The number of colonies was counted under a microscope.

Cell migration was examined using the scratch assay. Transfected cells were seeded in triplicate into two 6-well plates with complete medium and grown to 100% confluence. The confluence plates were scratched using a sterile pipette tip, medium was replaced with serum-free RPMI-1640 medium, and plates were photographed under a microscope (x10) at 0h and 24h. Cell migration was measured by monitoring the width of the scratch over time using Image J software.

The cell invasion assay was performed using a Transwell chamber (Millipore, Billerica, MA) coated with Matrigel basement membrane matrix (BD Biosciences, Franklin Lakes, NJ, USA). 200μl of 4 x104 transfected cells suspended in serum-free RPMI-1640 medium was transferred to the upper Matrigel chamber. 600 µl RPMI-1640 medium supplemented with 10% FBS was added to the lower chamber. The chamber was incubated at 37˚C for 36 h. Cells that invaded through the 8 μm membrane were fixed and stained with crystal violet. The number of cells in three random regions was counted using inverted microscopy.

Construction of subcutaneous in nude mice

Animal experiments were approved by the Ethics Committee of the Second Affiliated Hospital of Nantong University. Twelve BALB/c female nude mice aged 4 to 6 weeks (weighing approximately 20 g) were randomly divided into two groups. 1 x 106 transfected OVCAR3 cells in 100 μL PBS were injected subcutaneously into the right flanks of mice. Tumor size was measured with a caliper every three days for six weeks. Tumor size was calculated as (length × width2)/2.

Statistical analysis was performed with SPSS 22 and GraphPad 7.0 (GraphPad Software, La Jolla, CA, USA). Continuous data are expressed as mean ± standard deviation and were compared with the independent t-test. Categorical data are expressed as counts and were compared with Fisher's test. Comparisons of ≥3 groups were performed with one‐way analysis of variance (ANOVA). P < 0.05 was considered statistically significant.

SNHG25 is up-regulated in EOC tissues 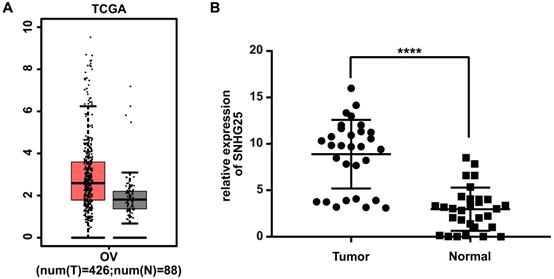 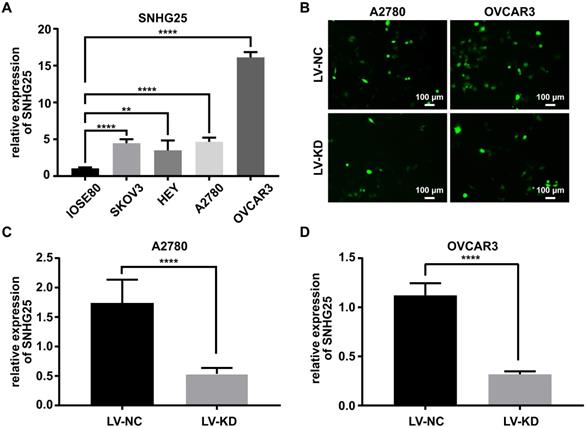 Knockdown efficiency of SNHG25 was confirmed via qRT-PCR 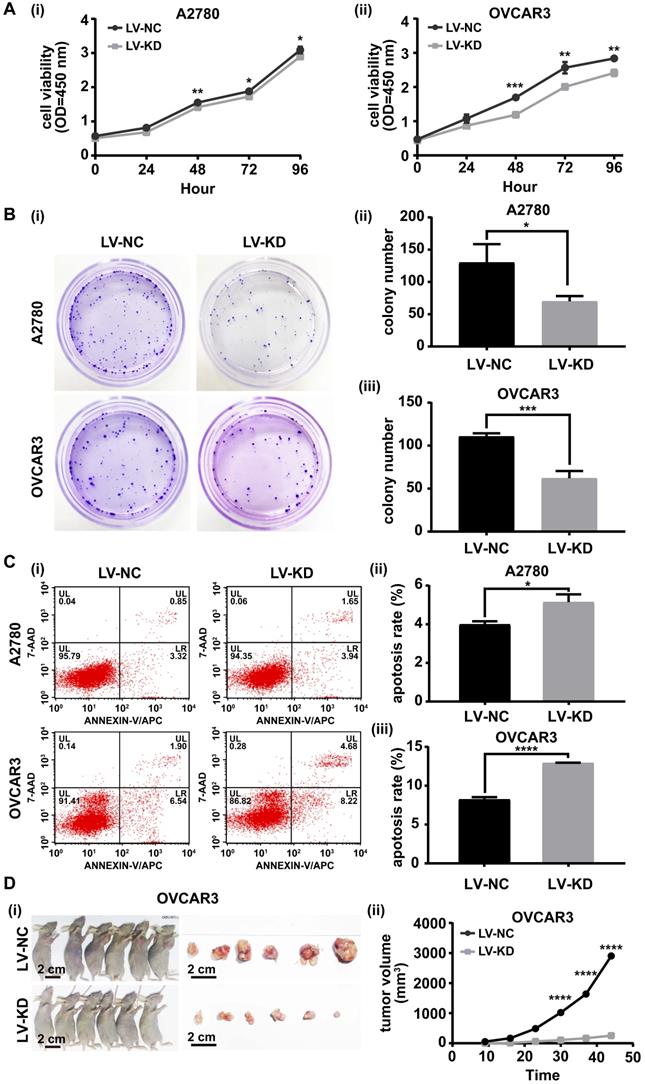 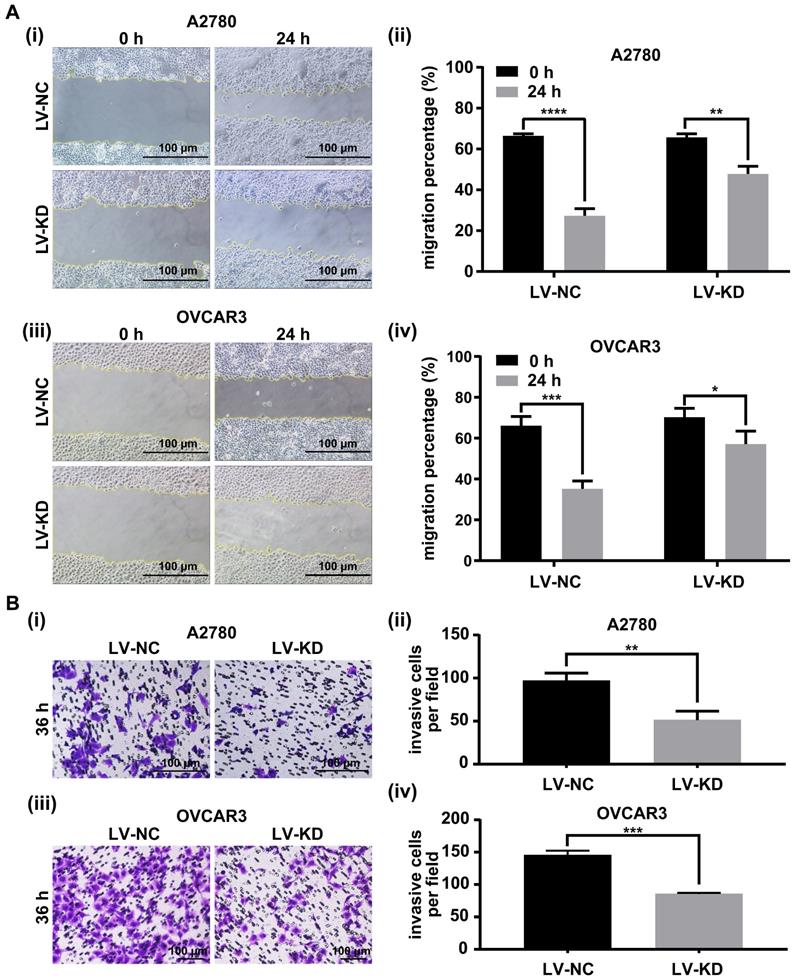 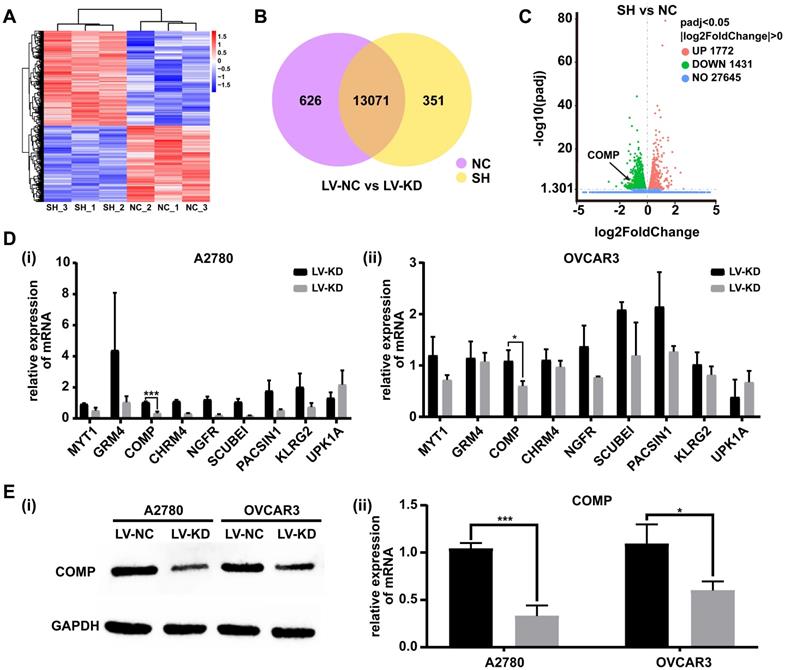 There is an unmet clinical need to identify reliable biomarkers for the early detection of ovarian cancer. Currently, diagnosis of ovarian cancer is challenging due to the non-specific symptoms and lack of reliable early diagnostic tests. LncRNAs were originally considered as transcriptional “noise” or artifacts of RT-PCR [19]. More recently, an increasing number of researchers have shown that lncRNAs play a pivotal role in the genesis and development of cancer. Evidence suggests that dysregulated lncRNAs participate in biological processes such as cell proliferation, migration, invasion and apoptosis in a variety of tumors [20-22], prompting lncRNAs to become a research hotspot [23].

The SNHG family may interact with tumor-related genes. Previous studies showed overexpression of SNHG12 was closely related to the development and poor prognosis of cervical cancer [24]; SNHG6 was upregulated in colon and rectal adenocarcinoma, promoting tumorigenesis [25]; SNHG8 regulated non-small cell lung cancer by influencing downstream effectors including CCND1 and CDK6[26]; and high SNHG20 expression was associated with shorter overall survival and SNHG20 was an independent risk factor for prognosis of serous EOC[27].

Data extracted from the TCGA database imply a role for SNHG25, located in 17q23.3, in ovarian cancer. The present study revealed that SNHG25 was upregulated in EOC tissues and ovarian cancer cell lines, and SNHG25 knockdown decreased the proliferation, migration and invasion of ovarian cancer cells. These data indicate that SNHG25 might serve as an oncogene and promote EOC tumorigenesis.

COMP is a non-collagenous extracellular matrix protein expressed in cartilage, ligament, and tendon [28-30]. COMP gene mutations can lead to pseudoachondroplasia and multiple epiphyseal dysplasia [31, 32]. Recent studies have identified a vital role for COMP in carcinogenesis [33, 34], including an essential role for hepatic stellate cell-derived COMP overexpression in MEK/ERK and PI3K/AKT-mediated HCC progression [35], and a contribution to the development and metastasis of breast cancer[36]. However, the involvement of COMP in ovarian cancer remains to be elucidated. The present study demonstrated a significant decrease in the expression of COMP protein in SNHG25 knockdown compared to control ovarian cancer cells in vitro. These data suggest that SNHG25 may participate in EOC tumorigenesis by targeting COMP.

It is known that the SNHG family, including SNHG25, can participate in tumor progression. Some of the SNHG family members promote the tumor progression, while others may inhibit the progression of tumor. But SNHG family, like other lncRNAs, couldn't affect the proliferation, invasion and metastasis of tumor cells directly. They usually influence tumor progression by regulating targeting genes expression or signaling pathways. For example, SNHG4 facilitated the growth of osteosarcoma cells by regulating DOCK7 expression [16], and SNHG15 accelerated the development of hepatocellular carcinoma by targeting miR-490-3p/histone deacetylase2 axis [18]. Furthermore, previous studies have found that different SNHG could promote the same tumor progression, such as both SNHG16 [37] and SNHG20 [27] promoting the progression of ovarian cancer. To our knowledge, regarding SNHG25, there is little knowledge about its roles in cancers. Our results showed that SNHG25 facilitated the proliferation, migration and invasion of ovarian cancer cells via regulating COMP expression. Our findings have enriched the roles and mechanisms of SNHG family in cancer biology.

This study was associated with several limitations. First, the sample size was small, increasing the risk of bias when extracting data. Second, prognosis was not explored. Third, further studies investigating the interaction between SNHG25 and COMP are required.

In conclusion, we present a novel role and possible mechanism of SNHG25 in EOC. Our results indicate that SNHG25 is highly expressed in EOC tissues, and is associated with FIGO stage, histological grade and CA125 level in patients with EOC. In vitro and in vivo findings demonstrated that SNHG25 promotes the proliferation, invasion and metastasis of ovarian cancer cells, potentially by regulating COMP.