Clinicopathological and prognostic significance of Fusobacterium nucleatum infection in colorectal cancer: a meta-analysis

Department of General Surgery, the First Affiliated Hospital of Jinan University, Guangzhou 510632, China.
*These authors contributed equally to this work. 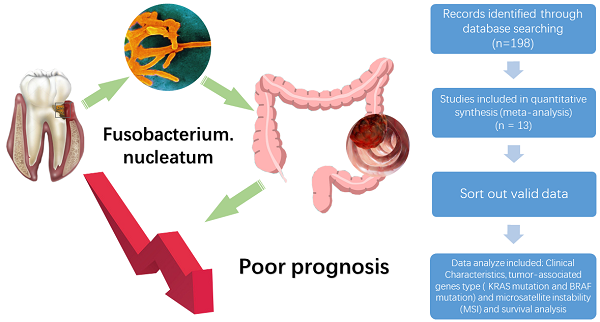 Background: This study aimed to clarify the relationship between F. nucleatum levels and the prognosis of CRC, which is still controversial.

Methods: Relevant articles were searched on PubMed, Web of Science, PMC and Embase up to April 7, 2020. Outcomes of interest included clinical characteristics, molecular characteristic and survival analysis. HR (OR), odds ratios (OR) and 95% confidence interval (CI) were calculated to explore the prognostic value and relationship of clinical characteristics of Fusobacterium nucleatum in CRC.

Colorectal cancer (CRC) is the third most frequent malignant tumor with 1.85 million new cases per year around the world based on the statistics in 2019 of the International Agency for Research on Cancer (IARC) of the World Health Organization (WHO) [1]. Although great progress has been made in the comprehensive treatment of CRC such as surgery, chemoradiotherapy, anti-angiogenesis, and immunotherapy, the 5-year survival rate is only 10%-20% for CRC patients with distant metastases [2]. Therefore, to discover risk factors related to the prognosis is important in improving the survival of CRC patients. Previous studies have reported that epigenetic changes, genetic mutations, chronic inflammation, lifestyle and diet are important factors for the survival of CRC patients [2]. Recently, some studies found that intestinal microecological balance is also tight related to the prognosis of CRC [3]. A study of Johnson. C et al. showed that colonic mucosal biofilms produced by intestinal flora may affect the development and progression of cancer as a regulator of cellular proliferation and colon cancer growth [4]. However, the role of gut microbiota in CRC is still not entirely clear due to its complexity.

Fusobacterium nucleatum (F. nucleatum) is a kind of gram-negative bacilli in the gastrointestinal tract with the ability to express important biofilm tissue behaviors and interactions with host cells through the expression of numerous adhesins [5]. Previous studies have proven that it may have a close relationship with occurrence and metastasis of CRC [5-7]. A former clinical cohort study demonstrated that high levels of F. nucleatum could be CRC biomarker for prognosis and is associated with a higher CRC-specific mortality [7]. On the contrary, some of them indicated that there is no significant correlation between F. nucleatum levels and the prognosis of CRC, especially in the analysis of the clinical survival rate [8]. Overall, the correlation between high abundance of F. nucleatum and the clinical and prognosis characteristics of CRC is still controversial.

In view of the above controversial statements, here we investigated this study with an integrated large sample size to clear the prognostic role of F. nucleatum infection in patients with CRC.

In this meta-analysis, the criteria were showed as following for included eligible studies: (1) The articles were original articles, (2) All included studies were controlled clinical studies of CRC patients with complete data, (3) The diagnosis of CRC was based on histology, (4) Subjects of studies were human, and the experimental samples were tumor tissues and surrounding tissues after surgical resection, (5) In the included studies, the DNA content of F. nucleatum in tissues was detected by quantitative polymerase chain reaction (PCR) or 16S ribosomal RNA (16S rRNA) sequencing or other detection methods, and cases were divided into low level and high level for the study according to the median cut-off point amount(2-ΔCt) of detectable fusobacteria DNA. The review articles, meeting minutes, letters, and only abstracts were excluded in this meta-analysis to ensure that original data was obtained. For studies with the same research team or with overlapping subjects, we selected the articles with the most comprehensive data.

Data for each study were extracted by two independent reviewers, H.F and J. P, and verified using predefined standards. When there were disagreements between two reviewers, it was decided by the third reviewer. The data of the included articles collected were as follows: the first author's name, the year of publication, patient ethnicity, date of birth, sample size for different types (F. nucleatum-high/ F. nucleatum-low), sample type, diagnostic techniques of F. nucleatum, the tumor-node-metastasis (TNM) stage, tumor-associated genes type ( KRAS mutation and BRAF mutation) and microsatellite instability (MSI), survival analysis, and follow-up time. The Engauge Digitizer 4.1 (http://digitizer.sourceforge.net/) was used to extract survival data from Kaplan-Meier curves if the detailed odds ratios (OR) and 95% confidence intervals (CIs) for survival were not directly stated in studies. 10 Multivariate analysis were used if both a univariate and multivariate analysis stated in the same comparison. Any discrepancies were discussed and resolved by consensus. The Newcastle-Ottawa scale (NOS) was used to grade articles and ensure the quality of the included studies [10]. The included domains were as follows: the adequacy of case definition, representativeness of the cases, number of cases, ascertainment of exposure, detection method and cutoff, assessment of outcome, and adequate follow-up. A higher score indicates a better methodological quality.

The meta-analysis was performed by means of Review Manager 5.3 (Cochrane Collaboration, Oxford, UK). As for dichotomous variables, the ORs were calculated, reporting 95% CI. Survival outcomes were summarized by using the generic inverse variance method. Overall survival (OS) was defined as the time from diagnosis until death. Disease-free survival (DFS) was defined as the interval between the initial primary diagnosis of CRC and the first relapse or death. Hazard ratio (HR) and 95% CI were calculated to assess the association between high level of F. nucleatum and survival. A fixed model was performed in aggregating and analyzing for results when I2 < 50%. If I2 >50%, the random-effects analysis was utilized. The pooled effects were determined by conducting a Z test, and the statistical significance was defined as the two-sided P < 0.05.

Flow Diagram of the Studies Retrieved for the Review

Table 1 summarizes the main characteristics of the included studies. The included cases originated from 8 countries among North America, Asia, and Europe. All the specimens were tumor tissues after surgical resection. The most commonly used test method for F. nucleatum was the quantitative polymerase chain reaction (qPCR) [7, 12-15, 18-21], and the 16S rRNA method was used in three studies [8, 11, 16] and the droplet digital PCR in one study [17]. All cases described in the retrieved articles were divided into two groupsbased on expression level of F. nucleatum DNA. There were 1, 796 in the high-level group and 1, 894 in the low-level group.

Association between F. nucleatum levels and prognosis of CRC patients 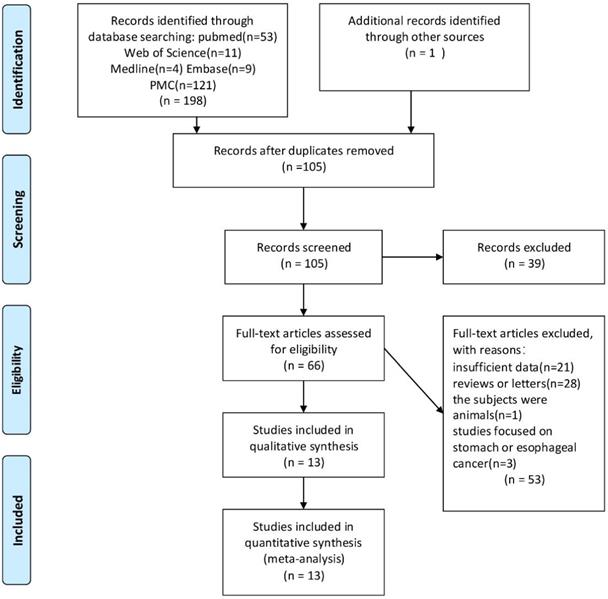 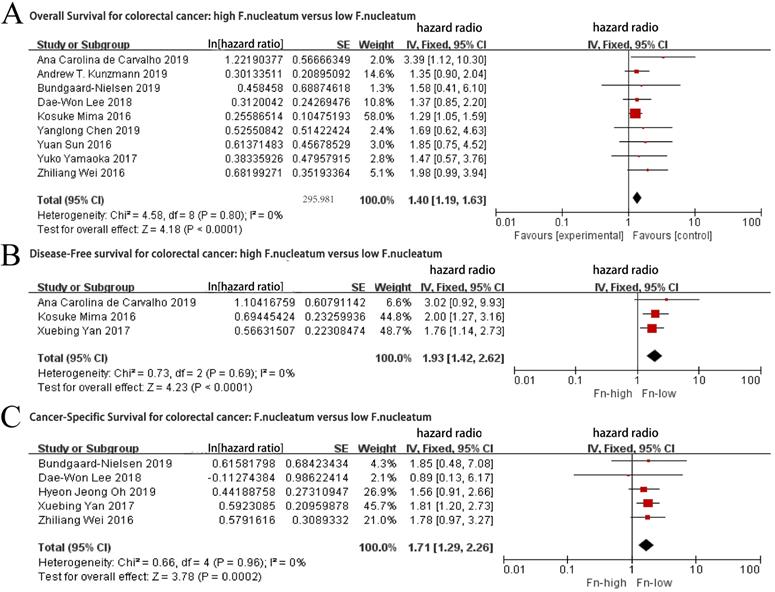 Association between high F.nuleatum abundance and Clinical characteristics of patients with CRC

Association between high F.nuleatum abundance and molecular characteristic of patients with CRC

Association Between high levels of F. nucleatum and molecular characteristics in CRC

To assess the impact of a single study on the overall meta-analysis, included studies detecting F. nucleatum by quantitative reverse transcription polymerase chain reaction (qPCR) were selected to perform sensitivity analysis (Table 4). The results of the sensitivity analysis are summarized in Table 4. The similar results of those all studies together were revealed in this analyze by using qPCR, including the relationship between F. nucleatum and tumor side, TNM Stage, T stage, N stage, KRAS mutation, OS and DFS in CRC.

This is the first meta-analysis demonstrating that high levels of F. nucleatum in CRC tissues were not associated with the tumor side. This contradicts a previous study [25] which reported that the proportion of F. nucleatum-high colorectal cancers gradually increases from the rectum to the cecum. However, another study [14] reported that high F. nucleatum levels had no correlation with the tumor side in CRC patients. Therefore, as F. nucleatum is a critical cancer-promoting factor, our results provided a more convincing evidence to confirm this.

The accumulation of genetic and epigenetic alterations, influenced from microbial and other environmental exposures and host responses to these exposures, these are all important factors affecting the development of CRC [29]. The current study have revealed that high levels of F. nucleatum were related with key tumor molecular features of CRC, including MSI-high and KRAS mutation which have been associated with clinical outcome in advanced CRC. The present data indicate a significant correlation between high F. nucleatum levels and MSI-high from six studies of 2520 patients. MSI status has been proven as a critical predictor for prognosis, and response to chemotherapy or immunotherapy in CRC patients [30-32]. A previous study reported the relationship between F. nucleatum and the immune response to CRC by different MSI statuses [33], suggesting that high F. nucleatum levels correlated with MSI status and regulated the antitumor immune response in CRC. Moreover, KRAS mutation also is an important molecular feature for chemotherapy resistance in CRC [34] and high F. nucleatum levels in CRC tissues will cause chemoresistance. Therefore, our results further confirmed this correlation implying that F. nucleatum is another underlying biomarker for the response to immunotherapy and chemotherapy. There was no significant association between high levels of F. nucleatum and mutations of BRAF and PIK2CA, as well as MLH1 hypermethylation in CRC tissues. These results agree with previous studies conducted in single populations, suggesting a role of F. nucleatum mainly with specific mutations in CRC. A more in-depth study of the association between the F. nucleatum levels and other mutations of CRC such as TP53, AKT1, PTEN, and so on, can reveal more biological roles of F. nucleatum in CRC.

Our meta-analysis had some limitations. Firstly, the number of the included studies was relatively small and they were only English studies. This could have resulted in publication bias. Secondly, although sensitivity analysis had been conducted and our results were further confirmed, most of the included studies used qPCR to measure F. nucleatum levels and few used 16S rRNA sequencing. The different methods and cut-off values may cause heterogeneity in some results. Lastly, there were some included studies without reported HRs and 95% CIs in the prognostic outcomes. We attempted to extract survival data from Kaplan-Meier curves according to the previous reported method [10]. This may have impacted the precision of the prognostic outcomes of F. nucleatum in CRC.

Despite these shortcomings, there is sufficient evidence to suggest that CRC with high F. nucleatum levels are at high risk of poor prognosis, including OS, DFS, and CSS. Our results also suggest that high F. nucleatum levels are correlated with tumor growth, distant metastasis, poor differentiation, MSI-high, and KRAS mutation in CRC. Future research on the relationship between F. nucleatum and other clinical and molecular characteristics in CRC should be assessed. In addition, understanding more mechanisms of F. nucleatum in the progression of CRC, and whether antibiotic therapy targeting F. nucleatum will help to prolong the prognosis of patients with CRC, will facilitate the identification of more treatment strategies in CRC.

Written informed consent to publish the clinical data was obtained from the patient before the initiation of the study.

29. Kawakami H, Zaanan A, Sinicrope FA. Microsatellite instability testing and its role in the management of colorectal cancer. Current treatment options in oncology. 2015;16:30