Conclusion: Serum exosomal hsa_circ_0026611 expression is significantly upregulated in ESCC with lymph node metastasis and is a predictor of ESCC prognosis.

Exosomes are extracellular vesicles, and these nanoparticles have a size of 50-140 nm and carry specific cargos, including DNA, proteins, lipids and RNA [5,6]. Cancer-derived exosomes may mediate the propagation of cancer by transferring pathogenic factors from cancer cells to healthy cells. Therefore, release of exosome contents into recipient cells can modulate the fate of the recipient cells [7]. Studies have shown that tumor-derived exosomes may contribute to tumor metastasis [8]. For instance, Lucia et al. [9] demonstrated that exosomal miRNAs stimulated the secretion of the proinflammatory cytokine IL-6 from tumor-associated macrophages in a TLR7/8-dependent manner, which in turn promoted liposarcoma cell invasion and metastasis. These studies have provided evidence of the importance of tumor-derived exosomes in the metastasis of tumor cells and provide new directions for the treatment of metastases.

Circular RNAs (circRNAs) represent a large class of non-coding RNAs that are widespread in the cytoplasm of eukaryotic cells and differ from long noncoding RNAs and microRNAs in that they do not have 5′ and 3′ end structures and exist as covalently closed cyclic structures [10]. CircRNAs have higher stability and conservation than linear RNAs [11]. CircRNAs can exist in exosomes and blood plasma because of their stability. Studies have confirmed that circRNAs are enriched by at least 2-fold in exosomes compared to exosome-producing cells [12]. A growing number of studies have revealed that circRNAs play a critical role in the development of cancer [13-15], including ESCC [16]. However, to date, there has been no study on the association between exosomal circRNA expression and lymph node metastasis in ESCC.

In this study, we isolated exosomes from serum ESCC samples and normal control individuals. RNA samples were further profiled to determine whether exosome circRNAs could serve as a novel and specific potential biomarker for ESCC.

Blood was collected in a serum clot activator tube and before centrifugation at 2000 r/min for 10 mins. And 2-ml of serum was stored at -80 °C for later use. Serum derived exosomes were isolated from 600 μL of serum using the Exoquick (SBI, America) as per the manufacturer's instructions. Briefly, serum samples were spun at 3000× g for 15 minutes to remove cells and debris. Next, 200 μL of exosome isolation reagent was added to clarified supernatants and samples were incubated at 4°C for 30 min. The precipitated exosomes were recovered by centrifugation at 1500× g for 30 minutes at room temperature. Exosome pellets were resuspended in 60 μL of PBS. The exosomes size was confirmed by using a transmission electron microscopy (HITACHI, Japan).

To further validate our exosome preparations, western blot analyses were conducted for exosomal markers CD63 and CD81. Samples of exosomes were washed and resuspended in RIPA lysis buffer (Bi Yuntian, Hefei, China) with the protease inhibitor mixture. The exosome of proteins was analyzed by Western blot as described. The PVDF membranes with transferred proteins were incubated with primary antibodies at 4ºC overnight and HRP-conjugated secondary antibodies (SBI, America) at room temperature for 1 h. Chemiluminescence reagents (Wabcan, Shanghai, China) was used to visualize the bands. The membrane was observed completing the developing in a darkroom and photography.

CircRNAs were isolated from exosomes using the Trizol Reagent and Protein Isolation Kit (Life Technologies, America) according to the manufacturer's protocol. The purity and concentration of all RNA samples were quantified spectrophotometrically using the NanoDrop ND-1000 system (NanoDrop, Thermo, America) the total exosome RNA of all samples over 30 ng.

The sample preparation and microarray hybridization were performed based on Agilent circRNA (Agilent Technologies Inc.). Briefly, total RNA from each sample was amplified and transcribed into fuorescent cRNA utilizing random primer according to Agilent circRNA protocol. The labeled cRNAs were hybridized onto the Agilent circRNA Array. After having washed the slides, the arrays were scanned by the Agilent scanner (G2565CA). Scanned images were then imported into Agilent Feature Extraction (v10.7) for grid alignment and data extraction. EdgeR package (R 3.4.4) was used to normalize the data and perform analysis to determine differential expression among the circRNAs.

The expression of circRNAs was measured using quantitative polymerase chain reaction (qRT-PCR) SybrGreen (Takara, Tokyo, Japan) in a Real time PCR System (Thermo, America). Sequences of serum exosomal hsa_circ_0026611 primers sequences as follows, 5′- CACTCCCCACATTCCCACCT -3′; reverse, 5′- AGATTCGTATGCGGACGGGT -3' (the primers sequences of hsa_circ_0126925, hsa_circ_0133794 and hsa_circ_0081144 were listed in Supplement Table 2). The RNA levels were normalized to glyceraldehyde-3-phosphate dehydrogenase (GAPDH). The primer sequences of GAPDH were the following, 5- GAACGGGAAGCTCACTG -3′and 5′- GCCTGCTTCACCACCTTCT -3′. These primers were synthesized by Invitrogen (Guangdong, China). The reaction conditions were as follows: 37 °C for 15 min, and 50 cycles of 95 °C for 30 s and 55 °C for 34 s. The expression levels were calculated by the 2-ΔCt method.

To detect the underlying biological pathways in ESCC, we conducted GO and KEGG pathway analyses based on all differentially expressed circRNAs using KOBAS 3.0(KOBAS 3.0, http://kobas.cbi.pku.edu.cn/), and significant correlations between target genes and their associated functions and pathways were assessed based on a threshold of P < 0.05.

Analysis of the differentially expressed circRNAs was performed using the EdgeR package in R (R 3.4.4). The differentially expressed circRNAs were identified through fold change filtering. Standard selection criteria for identifying the differentially expressed circRNAs were established as fold change (FC) >2 or <0.5 and P <0.05. A hierarchical clustering analysis was performed using R software (R 3.4.4). The Wilcoxon test was applied to evaluate clinical characteristics and their association with circRNAs expression. ROC curves and the area under the ROC curve were used to evaluate the value of the identified serum exosomal hsa_circ_0026611 in detecting ESCC with lymph node metastasis. The survival rate was calculated using the Kaplan-Meier method, and the comparison of two groups was performed using the log-rank test. We used the Cox regression analysis to investigate prognostic factors for ESCC. R software (R 3.4.4) was used for statistical analyses and to construct graphs. A two-sided P value < 0.05 was considered statistically significant. 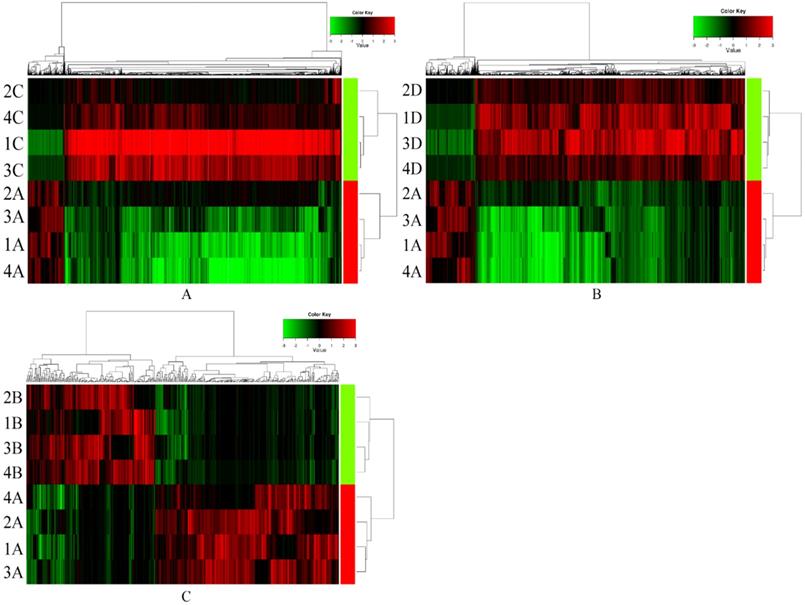 As nanoparticles, exosome microvesicle clusters have a size of 20-80 nm in the serum and exhibit round or elliptical vesicular membranes (Supplement Figure 1). To validate our exosome preparations, we analyzed five ESCC serum samples by western blot for the exosomal markers CD63 and CD81. The expression of CD63 and CD81 was specifically observed as a dual band in isolated exosomes (Supplement Figure 1). These findings showed that exosome enrichment was observed in patient serum that had been treated with the ExoQuick isolation reagent.

Next, we identified those exosomal circRNAs that warranted further study: 1) Those circRNAs that showed overlapping differential expression in all three comparison groups (106 circRNAs) were selected using a Venn diagram, including 50 significantly upregulated circRNAs and 56 downregulated circRNAs. 2) In addition, with criteria of fold change ≥3.0 and P <0.05, we selected only upregulated circRNAs for further study. 3) For qRT-PCR analysis of circRNAs, it is necessary to design primers on both sides of the back-splicing site or across the site and to design primers with selectable sequences and locations. This is quite different from designing primers for qRT-PCR analysis of conventional RNA. As such, the circRNAs selected for further experiments needed to allow the design of appropriate specific primers, and the length of the gene needed to be suitable for subsequent qRT-PCR experiments. According to these criteria, we identified exosomal hsa_circ_0026611, exosomal hsa_circ_0126925, exosomal hsa_circ_0133794 and exosomal hsa_circ_0081144 for further study.

Expression of the four serum exosomal circRNAs in ESCC

A ROC curve was constructed to evaluate the diagnostic value of serum exosomal hsa_circ_0026611 in distinguishing ESCC with lymph node metastasis from ESCC without lymph node metastasis (n=69). Our analyses showed that serum exosomal hsa_circ_0026611 expression could be used as a significant parameter to discriminate between non-lymph node-metastatic and lymph node-metastatic ESCC with an AUC of 0.724 (95% CI: 0.604~0.865, Figure 2), and the sensitivity and specificity were 0.800 and 0.529, respectively. 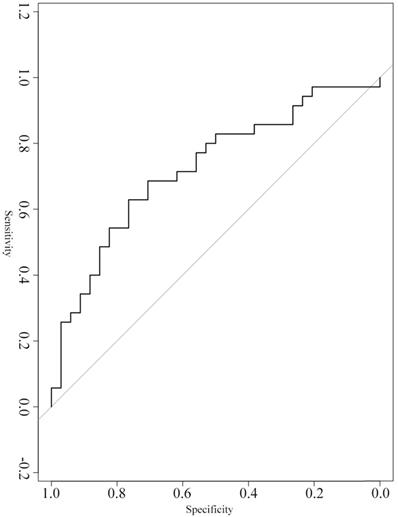 The top 10 enriched GO terms are shown in Supplement Figure 2. The three most significantly enriched pathways in the GO term analysis were embryonic skeletal system development, organelle lumen, and voltage-gated calcium channel activity. The KEGG pathway enrichment terms are presented in Supplement Figure 2. The results demonstrated that the differentially expressed circRNAs were mainly associated with the other glycan degradation, melanogenesis, and endocytosis super pathways.

Serum exosomal hsa_circ_0026611 can be an independent prognostic factor to predict OS and DFS. 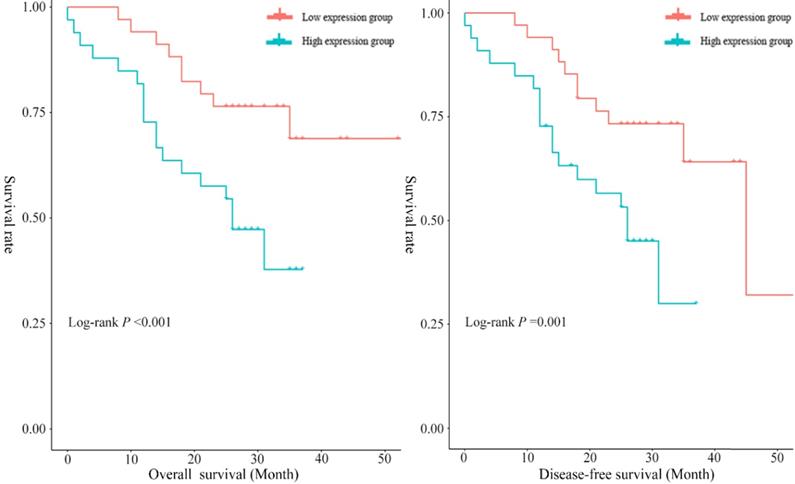 Exosomes transport various biomolecules, including DNA, RNA (including miRNAs and circRNAs), and lipid species. Tumor-derived exosomes can be isolated from serum, and they are proposed to transfer a repertoire of bioactive molecular cargo to recipient cells, which might be involved in tumor invasion [18]. Studies have indicated that many circulating miRNAs are passively released from apoptotic and necrotic cells [19], which may not truly reflect the biological changes that occur in these tumor cells. In contrast, exosomes are actively secreted in the peripheral blood by different cell types, including cancer cells [20]. Recent studies have found higher expression of miR-451 in the exosomal fraction than the supernatant (fold change = 8.02) in ESCC samples [21]. Another study showed that serum exosome miR-1246 expression is specifically upregulated in prostate cancer, but tissue miR-1246 expression is commonly downregulated [22]. These findings indicate that molecular cargo (including DNA and RNA) is selectively released into exosomes, leading to high expression of these molecules in serum samples and contributing to their utility as exosomal markers. Numerous studies have investigated whether exosomal miRNAs play functional roles in the development of different cancers. Nevertheless, there are few publications on exosomal circRNAs.

GO terms and KEGG pathway analyses were conducted to analyze the potential functions of differentially expressed circRNAs in ESCC. The KEGG pathway analysis revealed that several significant pathways might be activated in response to ESCC, including the endocytosis pathway. Endocytosis is responsible for bringing ligands, nutrients, plasma membrane proteins, and lipids into the cell interior and removing them from the cell surface [28]. Canonical Wnt signaling has been proposed to regulate endocytosis [29]. The Wnt/β-catenin signaling pathway plays a critical role in many biological processes, including stem cell maintenance and cell proliferation [30]. A recent study demonstrated that BCL11A enhanced tumor formation and cancer cell mobility by activating the Wnt/β-catenin signaling pathway in breast cancer stem cells [31]. In addition, in colorectal cancer, Qin et al. [32] indicated that knockdown of ZNF281 expression suppressed cell proliferation, migration, and invasion by inhibiting the Wnt/β-catenin pathway. More importantly, the Wnt signaling pathway has been shown to downregulate circRNA expression, which has been reported to have a regulatory role in glioblastoma and prostate cancer [33,34]. Therefore, we suspect that circRNAs regulate the Wnt signaling pathway, which modulates endocytosis to affect ESCC. However, further research is warranted to confirm these findings.

There are several limitations to our study. First, only 68 pairs of ESCC serum samples were analyzed in this study. A larger sample size should be used to further confirm our findings. Moreover, it is critical to explore the potential regulatory mechanisms of exosomal hsa_circ_0026611 in the progression of ESCC.

Serum exosomal hsa_circ_0026611 expression is significantly upregulated in ESCC with lymph node metastasis and might be a predictor of ESCC prognosis.

Funding was obtained from the National Key R&D Program of China (No.2017YFC0907100), and Medical Innovation project of Fujian Province (No.2018-CX-38). The funders had no role in study design, data collection and analysis, decision to publish, or preparation of the manuscript.

The datasets generated during and/or analyzed during the current study are not publicly available due we are performing related research, but are available from the corresponding author on reasonable request.

Informed consent was obtained from participants, and the study was approved by the Institutional Review Board of Fujian Medical University (number: 201495).