A phase II study of gemcitabine, erlotinib and S-1 in patients with advanced pancreatic cancer

Background: We evaluated the efficacy and safety of gemcitabine in combination with erlotinib and S-1 for the treatment of advanced pancreatic cancer.

Methods: Chemotherapy-naïve patients with pathologically-proven locally advanced, recurrent, or metastatic pancreatic adenocarcinoma were assessed for eligibility. Gemcitabine was administered at 1,000 mg/m2 intravenously on days 1 and 8, erlotinib was administered at 100 mg/day on days 1-21, and S-1 was administered at 60 mg/m2 on days 1-14 every 21 days and continued to a maximum of 8 cycles of treatment. Dose escalation of S-1 to 80 mg/m2 was permitted from the second cycle for pre-defined tolerable patients.

Conclusion: The combination of gemcitabine, erlotinib, and S-1 provided an acceptable toxicity profile and modest clinical benefits in patients with advanced pancreatic cancer.

Pancreatic ductal adenocarcinoma (PDAC) is an intractable disease and is the 7th leading cause of global cancer deaths in industrialized countries [1]. Because more than 80% of PDAC is locally advanced unresectable or metastatic at the time of diagnosis [2], the prognosis of PDAC patients is dismal with a 5-year relative survival rate of 11.4% [3]. Although various types of targeted agents and immunotherapeutic agents are actively used in other cancers, cytotoxic chemotherapy remains the mainstream treatment for unresectable PDAC.

Following the approval of gemcitabine by the US Food and Drug Administration in 1997 [4], gemcitabine-based chemotherapy was considered the standard of care for patients with advanced PDAC for a decade. In the era of gemcitabine, various attempts were made simultaneously to find an optimal drug combination that could function synergistically with gemcitabine. A number of drugs, including cytotoxic agents [5-10] and targeted agents [11, 12], in combination with gemcitabine, were tested in large randomized clinical trials, but they failed to improve the efficacy.

Among the various drugs investigated, erlotinib, a small-molecule inhibitor of epidermal growth factor receptor, improved the efficacy of gemcitabine in a randomized phase III trial [13]. In this study, erlotinib in combination with gemcitabine showed a small but statistically significant improvement in overall survival when compared to gemcitabine monotherapy (6.2 months vs. 5.9 months, p=0.038). S-1, an oral fluoropyrimidine derivative, was also studied as a combination partner of gemcitabine and has consistently shown promising results in terms of efficacy and safety in a series of phase II studies [14-18].

At the time this study was proposed and designed, gemcitabine plus erlotinib combination chemotherapy was approved as front-line chemotherapy for unresectable PDAC and was widely used globally. However, since the benefit of gemcitabine plus erlotinib in survival prolongation was too small, there has been a continuing need for new drugs or combination regimens for patients with PDAC. In this background, combination therapy with gemcitabine, erlotinib, and S-1 (GTS regimen) has been proposed as a novel front-line treatment for unresectable PDAC, and this study was conducted to demonstrate the efficacy and safety of this regimen.

With two combination regimens of FOLFIRINOX (a combination of oxaliplatin, folinic acid, irinotecan, and fluorouracil [5-FU]) [19] and albumin-bound paclitaxel/gemcitabine [20] currently accepted as front-line treatments and actively used in fit patients, the clinician's interest and possible range of application for our combination regimen will be limited. However, since GTS combination therapy has never been investigated in PDAC, it would be valuable to report and share efficacy and safety data.

Patients were eligible for this study if they fulfilled all of the following criteria: (1) pathologically confirmed unresectable locally advanced, recurrent, or metastatic adenocarcinoma of the pancreas; (2) measurable disease, as defined using version 1.1 of the Response Evaluation Criteria In Solid Tumors (RECIST); (3) age ≥18 years; (4) Eastern Cooperative Oncology Group (ECOG) performance status of 0-1; (5) prior adjuvant chemotherapy without gemcitabine, erlotinib, or S-1 that had been completed >4 weeks before enrollment; (6) more than 4 weeks since completion of prior radiotherapy (measurable lesions are outside the radiation field); (7) adequate hematological, renal, and hepatic functions, as defined using an absolute neutrophil count of ≥1.5 × 109/L, a platelet count of ≥100 × 109/L, serum creatinine levels of ≤1.5 × upper limit of normal or creatinine clearance ≥50 mL/min, serum bilirubin ≤2× UNL, aspartate aminotransferase and alanine aminotransferase levels of ≤2.5×; and, (8) willingness to provide informed consent to participate in this study.

Patients were excluded based on the following criteria: (1) a history of treatment with gemcitabine, erlotinib, or S-1 as adjuvant chemotherapy; (2) contraindication for any drug contained in the chemotherapy regimen; (3) central nervous system metastasis; (4) serious GI bleeding or obvious bowel obstruction; (5) other previous or concurrent malignancies within the last 5 years, with the exception of cured basal cell carcinoma of the skin or carcinoma in situ of the uterine cervix; (6) pregnant or lactating female patients; (7) sexually active and the partner is unwilling to practice contraception during the study; and (8) other clinically significant comorbid conditions, such as an active infection or severe cardiopulmonary dysfunction.

To evaluate a function of the drug and the frequency of administration, we calculated the relative dose intensity (RDI), which is expressed as the ratio of the administered amount of dose per time unit (mg/m2/week) to that of the originally planned dose.

According to Simon's optimal two-stage design, 25 patients were required for enrollment to test the null hypothesis that the true ORR is 10% versus the alternative hypothesis that the true ORR is at least 30%, at a significance level of p<0.05 with a power of 80%. If two or more responses were observed among 15 patients in the first stage, the study was continued with 10 additional patients included. As the drop-out rate was assumed to be 10%, the number of patients necessary for recruitment into the study was calculated to be 28.

Descriptive statistics were used to summarize the patients' characteristics, tumor responses, and safety events. The Kaplan-Meier method was used to estimate the median PFS and OS. All enrolled patients were included in an intent-to-treat analysis.

From October 2012 to May 2016, 37 patients who met the inclusion criteria were enrolled in this study. We exceeded the planned number of patients because several unexpected dropouts occurred early in the study and we allowed simultaneous registration of excess patients before the end of the study from multiple institutions. The reasons for dropout are explained below. The demographic and pathologic characteristics of the patients are described in Table 1. The median age was 61.5 years (range 35-88 years). Sixteen patients (43.2%) were male, and the majority of patients (73.0%) had an ECOG PS of 1. Twenty-six patients (70.3%) had metastatic disease, eight patients (21.6%) had recurrent pancreatic cancer after curative surgery, and three patients (8.1%) had locally advanced disease at the time of screening. The most common metastatic sites were distant lymph nodes (43.2%), the liver (43.2%), the lung (29.7%), and the peritoneum (27.0%).

In total, 140 treatment cycles were administered to 37 patients, with a median of 3.8 cycles (range 1-10 cycles) per patient. Five patients did not complete the first cycle of chemotherapy: two patients died (one patient died of cerebral infarction and one patient died of hepatic tumor rupture), two patients withdrew their informed consent, and one patient was lost to follow-up. Seven patients (18.9%) completed eight or more cycles of chemotherapy. Eleven patients (29.7%) required dose reductions or delays. The mean relative dose intensities (ratio of the dose received to the dose planned) of gemcitabine, S-1 for all of the cycles administered were 0.87 [95% confidence interval (CI) 0.81-0.93], and 0.92 (95% CI 0.87-0.96), respectively (Table 2).

Of the 37 patients, 32 were eligible for response evaluation. Five patients were not available for response evaluation: the detailed reasons for 5 patients who did not complete the first cycle are described in the 'Treatment administration' section. The tumor responses are summarized in Table 3. There were 4 partial responses, 19 cases of stable disease, and 9 cases of disease progression. All partial responses are confirmed in the following CT scan. The confirmed ORR was 12.5% (95% CI 5.1-28.9%) and the disease control rate was 71.9% (95% CI 56.8-86.3%). The median time to response was 1.4 months (95% CI 1.3-1.5 months) and the median duration of response was 7.4 months (95% CI 3.8-11.0 months). 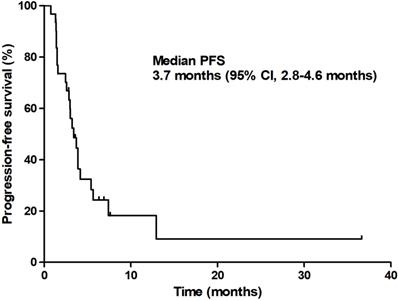 Safety was assessed in 36 patients on the basis of 139 cycles. One patient was lost to follow-up after receiving gemcitabine on day 1 of the first cycle, was excluded. One patient died suddenly of abdominal hemorrhage due to hepatic tumor rupture on day 3 of the first cycle. The adverse events are listed in Table 4. The most common grade 3/4 hematologic toxicity was neutropenia (25.0%). Febrile neutropenia developed in one patient (2.8%), who recovered without complications. Nonhematologic toxicities were usually mild and manageable. Grade 3 toxicities with a frequency of 5% or more included fatigue, infection, vomiting, and mucositis. 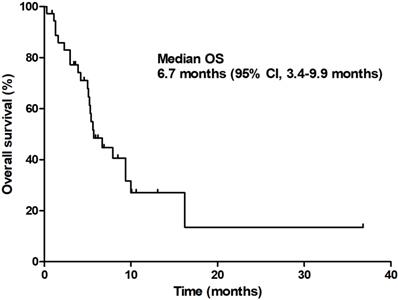 In this study, the confirmed ORR of patients was 12.5%, which is slightly better than that of gemcitabine plus erlotinib [13] and is lower than the results of phase III studies of gemcitabine plus S-1 (GS) [21]. The DCR was 71.9% (95% CI, 56.8-86.3%) and the median PFS and OS were 3.7 months (95% CI, 2.8-4.6 months) and 6.7 months (95% CI, 3.4-9.9 months), respectively. The GTS regimen showed an acceptable toxicity profile in the safety analysis. Since, at this point, FOLFIRINOX and albumin-bound paclitaxel/gemcitabine are actively used as standard treatments; the implications of this result are thought to be limited.

5-FU showed a marked synergistic cytotoxic effect with gemcitabine in pancreatic cancer cells in vitro [22] and S-1, which has an equivalent efficacy with a continuous 5-FU infusion in solid cancer, showed promising results in several phase II studies with an ORR of 28-48% [14-18]. This study aimed to improve the efficacy of the existing treatment and to investigate a novel triple-combination regimen by adding S-1, which exhibits a synergistic effect with efficacy-proven gemcitabine plus erlotinib.

While this study was in progress, the results of a phase III study (GEST study) comparing GS with gemcitabine alone were published [21]. In this trial, despite the improvement in PFS and ORR, GS showed numerically longer OS compared to gemcitabine alone, but it was not statistically significant (10.1 months vs. 8.8 months, p=0.15). In the subgroup analysis of GEST study, GS was associated with significantly improved OS in locally advanced disease compared to metastatic disease. Furthermore, a pooled analysis of subsequent randomized studies comparing GS to gemcitabine alone also re-confirmed that GS showed better OS in locally advanced disease than metastatic disease (16.4 months vs. 11.8 months, HR 0.708, p=0.02) and supported the result of the subgroup analysis from the GEST study. Since most of the participants in this study had recurrent or metastatic disease rather than locally advanced disease, it is assumed that the differences in characteristics of the study population may lead to unsatisfactory results. In our study, the best response of all three patients with locally advanced disease was stable disease but it is difficult to determine statistical significance because the number of patients was too small.

Recently, it was recommended that patients with locally advanced disease should be studied separately from those with metastatic disease because locally advanced and metastatic disease are considered to be two different clinical entities, each with distinctive clinical characteristics [23]. Therefore, a study design with an appropriately selected population will be required to further clarify the efficacy of the GTS regimen.

In this study, the median age of the patients was >60 years, and 75% of the patients were symptomatic at the beginning of the study. More than half of the patients had two or more metastatic sites, and 45% and 13% of patients presented with liver metastasis and peritoneal metastasis, respectively. The patients' demographics in our study are relatively inferior to the conditions of other studies, and these differences may have influenced the outcome.

Regarding the safety analysis, GTS showed a modest toxicity profile. Except for neutropenia (25%) and fatigue (22%), the incidence of all other G3 or 4 toxicity profiles did not exceed 10%, which was similar or relatively lower than that of gemcitabine plus erlotinib [13] and GS [21].

In conclusion, GTS did not show the expected efficacy outcome with a confirmed ORR of 12.5%. However, considering the meaningful effect that GS showed in locally advanced disease in a subsequent study and the modest safety profile that our study showed, there may be room to further investigate the GTS regimen depending on the profile of the patient.

This research was supported by the Hallym University Research Fund (Protocol No. HMC-HO-GI-1201).