Herein, we reported that ADP-Ribosylation Factor Like GTPase 4C (ARL4C) was highly expressed in glioma stem-like cells (GSLCs). GSLCs, determined by the efficiency of sphere formation in vitro and tumor growth in vivo, was increased by overexpression of ARL4C. ARL4C induced the tumorigenesis through ALDH1A3. Analyses of 325 patient specimens showed that ARL4C was highly expressed in glioblastoma (GBM) as compared with lower grade gliomas. In addition, higher level ARL4C expression in glioma was correlated with poorer progression-free survival and overall survival of patients. Therefore, ARL4C may act as a novel prognostic marker and a therapeutic target for GBM.

Glioblastoma (GBM) is featured with heterogeneity, increased invasiveness, high recurrence rate and resistance to therapy, which were attributed to the presence of glioma stem-like cells (GSLCs) in tumors [1, 2] Therefore, it is important to identify novel approaches targeting GSLCs.

Small GTPases of Ras superfamily are composed of more than 100 members, which share a conserved structure and biochemical properties, acting as binary molecular switches turned on by binding GTP and off by hydrolyzing GTP to GDP [3]. The key function of Ras superfamily members is the regulation of actin cytoskeleton rearrangement, cell growth and sustaining cell stemness [4,5]. Small monomeric GTPases of Ras superfamily also include the most prominent druggable cancer targets [6], such as CDC42, RAC1 and RhoA, which are important for the growth of GBM cells [7]. However, the precise role of Ras superfamily proteins in affecting GSLC features remains unclear.

ARL4C, a member of Ras superfamily, is associated with migration, invasion and proliferation of cancer cells and is regarded as a therapeutic target in colorectal cancer, lung cancer [8] and liver cancer [9]. We previously reported that high level expression of ARL4C promoted the invasion of PTEN-deficient GBM cells [10]. In order to examine the clinical significance of ARL4C and its role in controlling GSLCs, we evaluated the contribution of ARL4C to sustaining the stemness of GSLCs and the underlying molecular mechanism. In addition, we analyzed the expression of ARL4C in clinical glioma specimens and its association with patient prognosis.

This study included three independent cohorts of glioma patients, who did not receive preoperative radiotherapy, chemotherapy or immunotherapy. In cohort of Chongqing, glioma tissue samples were collected during the years 2013 to 2015. In cohort of Hefei, samples were collected during the years 2007 to 2011. In the Shanghai cohort, glioma tissue microarrays were purchased from BioChip (Shanghai, China), which were collected during the years from 2008 to 2011. All patients were followed up for 5 years and clinic pathologic parameters were obtained from medical records maintained in the Departments of Pathology of respective hospitals (Supplementary Table 1). The study concerning human specimens were performed in accordance with the principles of the Helsinki Declaration and approved by the Ethics Committee of Third Military Medical University (Army Medical University), Chongqing, China and the Affiliated Provincial Hospital of Anhui Medical University, Hefei, China. Glioma diagnosis was based on the World Health Organization (WHO) Classification of central nervous system tumor (2016).

Immunohistochemical staining was conducted as previously described [12]. Paraffin-embedded GBM tissues and xenografts were cut into 5 μm-thick sections using a Dako REAL Envision Detection System (Dako, Glostrup, Denmark) according to manufacturer's instructions. The slides were incubated with rabbit polyclonal anti-ARL4C (1:100; ab-122025, Abcam, Cambridge, UK) at 4°C overnight. After removing the primary antibody with PBS, a horseradish per-oxidase (HRP)-conjugated secondary antibody (Dako) was added and the slides were incubated at 37°C for 30 min. Semi-quantitation of ARL4C was independently performed according to the staining intensity and the percentage of positive tumor cells as previously described [13]. The staining intensity was scored as follows: 0, no staining; 1, weak staining; 2, moderate staining; and 3, strong staining. The percentage of positive cancer cells was scored as: 1 = 1-25%; 2 = 26-50%; 3 = 51-75%; and 4 > 75%. All slides were evaluated independently by two pathologists without knowledge of the identity of patients and the clinical outcome.

In vitro limiting dilution assay was performed as previously described [13] and analyzed with an online software (http://bioinf.wehi.edu.au/software/elda/). The sphere with a diameter > 50 μm was counted under microscopy.

For overexpression of ARL4C in GBM cells, full length human ARL4C were generated and inserted into a lentivirus vector. Lentiviral particles containing ARL4C were packaged. GBM-1 and U87 cells (1×106/well) were infected with lentivirus containing constructs. The cells were selected and enriched by 4 µg/ml puromycin.

GBM-1 and U87 cells (1×106/well) were infected with shARL4C lentivirus or empty control lentivirus vectors (Genechem, Shanghai, China). Cells were selected and enriched by 4 μg/ml puromycin. The sequence for the shRNAs were listed in Supplementary Table 2.

All experiments were performed at least three times and data were shown as the mean ± SD. Unpaired two-group comparison and multiple comparisons were made with the Student t-test or one-way ANOVA. Animal survival was analyzed using the Kaplan-Meier method, with the log-rank test for comparison. X-tile software was used to determine the cutoff point of ARL4C expression in clinical sample analysis [14].

As Ras-superfamily members have been linked with tumor initiation and progression, we aimed to identify specific small GTPases of the superfamily that may be expressed in glioma stem-like cells (GSLCs) and examine their functional significance in tumor formation and progression. Microarray profiles comparing GSLCs and non-stem tumor cells (NSTCs) isolated from primary human GBM (GBM-1) (Fig. 1A) showed that 4 out of 100 members in the Ras-superfamily (RAB26, RAB27B, RAB6B and ARL4C) were significantly up-regulated in GSLCs (P < 0.05) (Fig. 1B). QRT-PCR indicated that ARL4C was consistently increased in all tested GSLCs compared with matched NSTCs (Fig. 1C). Increased expression of ARL4C protein in GSLCs relative to NSTCs was then confirmed (Fig. 1D) and co-localized with the GSLC marker CD133 in human GBM tissues (Fig. 1E).

To further examine the effects of ARL4C on tumorigenesis of GSLCs in vivo, we transplanted shARL4C and shCtrl GBM cells into the brain of NOD-SCID mice. Bioluminescent imaging detected tumors formed by shARL4C U87 cells with smaller volumes compared to those formed by shCtrl U87 cells (Fig. 2D). Mice bearing tumors formed by shARL4C U87 cells showed longer survival than those transplanted with shCtrl U87 cells (Fig.2E). These data suggested that ARL4C was crucial for the tumorigenesis of GBM cells.

The ARL4C/ALDH1A3 axis facilitated the tumorigenesis of GBM cells

Microarray analyses were then performed to compare shCtrl-GBM-1 with shARL4C-1-GBM-1 cells for gene expression (Fig. 3A), ALDH1A3, a predominant ALDH enzyme that participates in diverse range of biological processes in glioma stem cells [15,16], was most correlated to ARL4C expression in TCGA-LGGGBM database among 198 genes selected by comparison of differential gene expression in shCtrl- and shARL4C-1 GBM-1 cells (Fig. 3B). Western blotting showed that the expression of ALDH1A3 was higher in ARL4C-high GBM specimens than in ARL4C-low GBM specimens (Fig. 3C). Additionally, ALDH1A3 was decreased in shARL4C-1 GBM cells than that in shCtrl cells, and with an increase in OEARL4C GBM cells (Fig. 3D and 3E). When overexpressing ARL4C or knocking down of ALDH1A3 in U87 cells (Fig. 4A and 4B), we found that ARL4C increased the sphere forming ability of GBM cell, which is partially decreased by the knockdown of ALDH1A3. In examining the capacity of ALDH1A3 knockdown to reverse tumor growth, we found that knockdown of ALDH1A3 attenuated the pro-oncogene effects of ARL4C overexpressed in GBM cells (Fig. 4C and 4D). The survival of mice bearing-tumor formed by shALDH1A3 and OEARL4C-cells were markedly increased as compared to those bearing tumors formed by OEARL4C-cells alone (Fig. 4E). IHC staining of xenograft tumors showed that the expression of ALDH1A3 and SOX2 was decreased in tumors derived from shARL4C-1-GBM cells as compared with those derived from shCtrl-GBM cells (Fig. 4F). Thus, ALDH1A3 appears to be a target in ARL4C-mediated tumorigenic process. 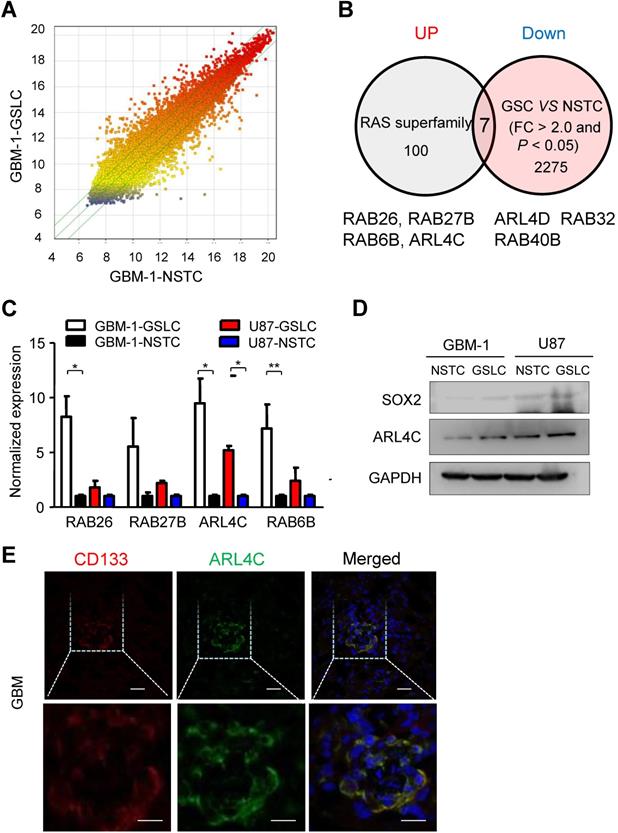 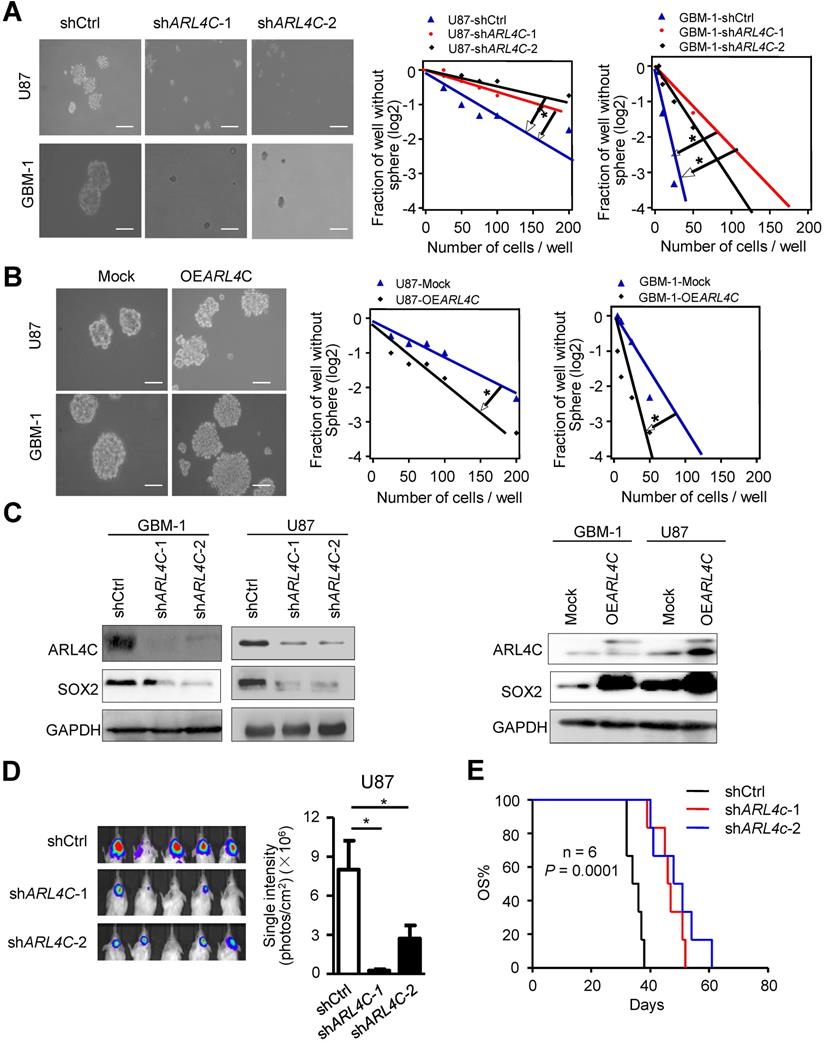 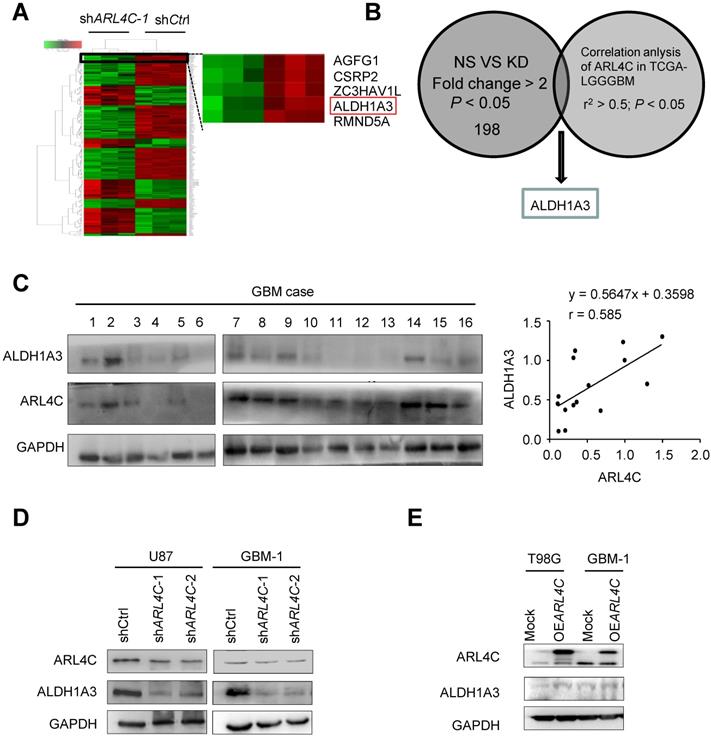 Validating the relationship between ARL4C expression and human glioma malignancy revealed that human gliomas expressed relatively higher levels of ARL4C than corresponding normal brain tissues (Fig. 5A). In 325 patients with gliomas, ARL4C was markedly increased in high-grade tumors. Furthermore, ARL4C expression in Grade IV GBM was higher than that in Grade III anaplastic gliomas (P < 0.05; Fig. 5B). Similar results were obtained from 620 patients with gliomas from TCGA database (Fig. 5C).

Kaplan-Meier analyses showed that patients with lower level of ARL4C had longer overall survival (OS; P = 0.0043) and progression-free survival (PFS; P = 0.0028) than those with higher level ARL4C in tumors. Similar results were obtained in all three regional-cohorts. Additionally, higher ARL4C expression was significantly correlated with poorer progression-free survival and overall survival of patients with Grade IV GBM (Supplementary Fig. 2A). In contrast, no correlation between ARL4C and patient survival was observed in patients with Grade Π and Grade III tumors (Supplementary Fig. 2B and 2C). Therefore, higher ARL4C expression was associated with poorer prognosis in gliomas and ARL4C serves as a predictor. 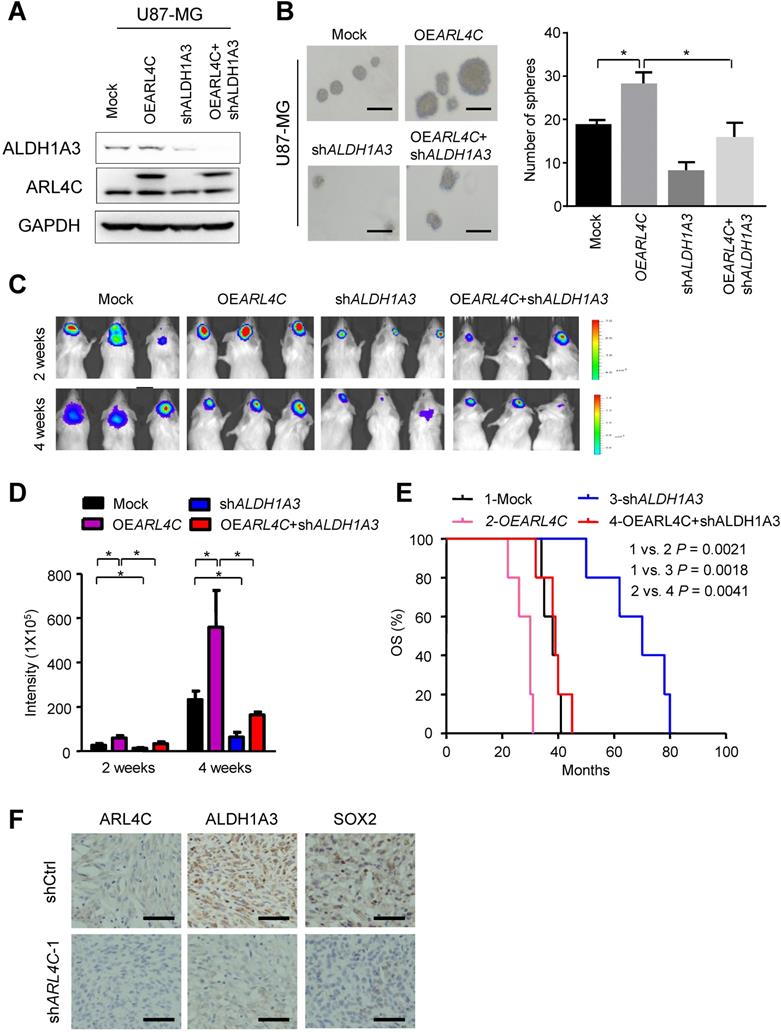 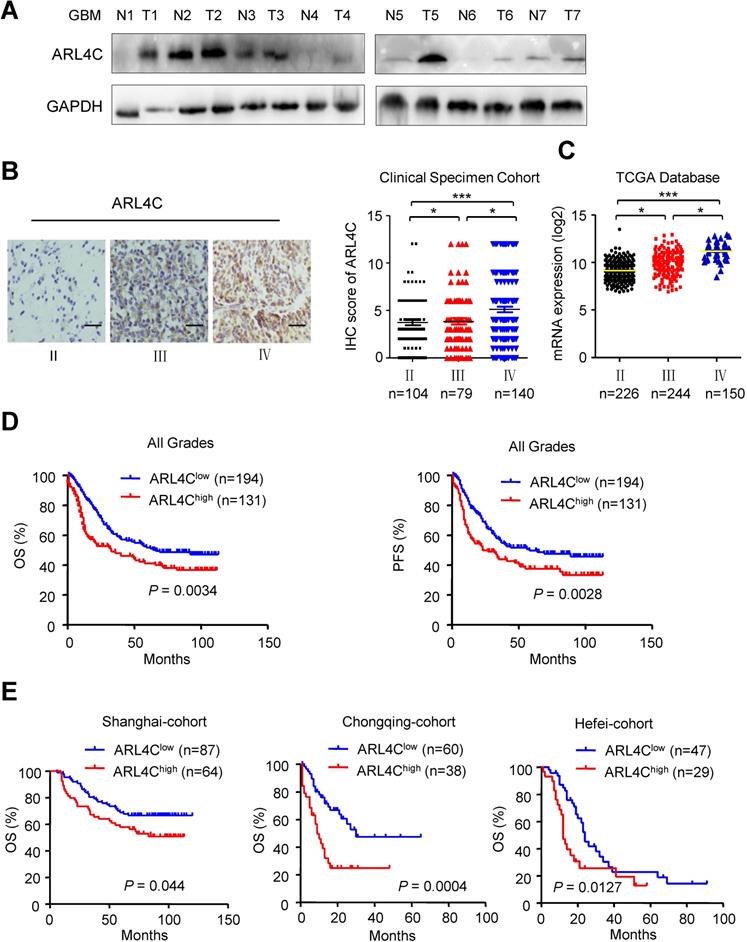 Glioma stem like cells (GSLCs), a subset of tumor cells with stem cell characteristics such as the preferential expression of stem cell markers and the enhanced self-renewal ability, are crucial for tumorigenesis, progression and control of the plasticity of tumor cells [17,18].Given the distinct gene sets and signaling pathways differentially expressed in gliomas with different grades, GSLCs in each grade may contain diverse and dysregulated pathways that govern unique phenotype of tumor growth, progression, and resistance to therapy [19,20]. Our current studies found that ARL4C was highly expressed in GSLCs and contributed to their stemness. We also showed that ARL4C was associated with tumor grade and poorer OS of patients, suggesting that ARL4C acts as an oncoprotein in glioma.

ARL4C, a Ras-GTP binding protein, was involved in various tumor progression processes [21,22]. The expression of ARL4C is regulated by many factors and pathways, such as promoter methylation, Wnt-β-catenin and growth factor-Ras signaling [23,24]. Our previous study found that PTEN/AKT/mTOR pathway stabilized ARL4C and decreased its ubiquitination. However, the downstream pathway of ARL4C was unknown. Here, we identified that ALDH1A3 as the main downstream target of ARL4C, and that ARL4C/ALDH1A3 axis was crucial for the tumorigenicity of glioma cells.

ALDH1A3 is a member of ALDH superfamily, which is vital for oxidizing endogenous and exogenous aldehydes [25]. Elevated ALDH has been considered a cancer stem cell marker in multiple tumor types [26]. Recent studies have shown that ALDH1A3 was required for sustaining ALDH activity in cancer stem cells [27] and was also regarded as a key determinant for the maintenance of mesochymal features of GSLCs. ALDH1A3 expression is regulated by several factors including promoter methylation, STAT3, hepatocyte growth factor (HGF)/c-MET pathways and protein ubiquitination. Our study defined ARL4C as a novel regulator that increases ALDH1A3 activity in GSLCs.

In summary, we provided evidence for ARL4C-ALDH1A3 axis in regulating GSLC properties and its value as a predictor of glioma patient survival.

This study was supported by the grant cstc2018jcyj-yszxX0008, and the research project no. 82002656, no. 81874087 from the National Natural Science Foundation of China and no. 2017jsz110 from Key Laboratory of Tumor Immunopathology, Ministry of Education of China.

24. Matsumoto S, Fujii S, Kikuchi A. Arl4c is a key regulator of tubulogenesis and tumourigenesis as a target gene of Wnt-beta-catenin and growth factor-Ras signalling. J Biochem. 2017;161:27-35