Purpose: To establish a preoperative nomogram incorporating morphological and dynamic contrast-enhanced (DCE) features to individually predict the risk of malignancy in patients with breast tumor.

Methods A total of 447 consecutive female patients who were divided into the primary cohort (n=326) and the validation cohort (n=121) were enrolled between March 2015 to January 2018. Univariate and multivariate logistic regression analyses were used to identify the potential independent indicators of malignancy. An MRI-based nomogram integrating morphological features and kinetic curves was developed to achieve individualized risk prediction of malignancy in patients with breast masses. The discrimination, calibration ability and clinical utility of the MRI-based model were assessed using C-index, calibration curve and decision curve analysis.

Results: Age, tumor size, margin, internal enhancement characteristics, and kinetic curve were confirmed as the independent predictors of malignancy. The AUC of MRI-based nomogram was 0.940 (95% CI: 0.911-0.970) and 0.894 (95% CI: 0.816-0.974) in the primary cohort and validation cohort, respectively. 447 patients were subdivided into the low-risk group (n=107) and high-risk group (n=340) based on the optimal cut-off value of 21.704. The high-risk patients had a higher likelihood of harboring malignancy.

Conclusion: The MRI-based nomogram can be used to achieve an accurate individualized risk prediction of malignancy and reduce unnecessary breast biopsy.

Breast cancer is the most common cancer diagnosed and is the second leading cause of cancer death among women. Breast cancer survival varies substantially by stage at diagnosis, early diagnosis is vital for the prognosis of breast cancer [1]. Breast magnetic resonance imaging (MRI) is considered as a crucial imaging tool for diagnosis and preoperative staging of breast cancer [2]. And its clinical importance has gradually increased in recent years. Breast MRI has even changed the clinical management for breast cancer.

Besides mammography, ultrasound, positron emission tomography (PET) and MRI are often used as alternate modalities, the advantages of MRI over other modalities are to describe the tumor in dense breast tissue and cancer in a three-dimensional way [3-7]. Another advantage of MRI is the high sensitivity (>90%) in breast cancer diagnosis [8]. Thus, MRI has the potential to facilitate the diagnosis in patients with breast tumor. However, the specificity of MRI is relatively low. A false-positive result may trigger severe anxiety, unnecessary breast biopsies, and overtreatment. The relatively low specificity of MRI has been attributed to overlapping features in benign and malignant breast tumors [9,10]. And the methods of estimating the MRI findings have been somewhat intuitive and relatively inter-observer variability [11]. On this account, the American College of Radiology (ACR) issued and updated the Breast Imaging Reporting and Data System (BI-RADS) MRI lexicon which standardized the terminology of morphological features and kinetic curve of breast tumors [12]. Even so, BI-RADS didn't identify the correlation between tumor characteristics and malignancy risk. According to the morphological and dynamic contrast-enhanced (DCE) features, the conventional diagnosis of breast tumor on MRI is mainly based on the experience of radiologists. there was not a predictive tool to evaluate the individual risk of malignant tumor based on breast MRI.

In view of these reasons, the following hypothesis immediately puts forward: whether a predictive tool is constructed to evaluate the individual risk of malignancy in patients with breast tumor based on morphological and DCE features?

Recently, nomogram which creates a simple graphical representation of a predictive statistical model [13], has become widely used as predictive tools for diagnosing malignancies. Briefly, A nomogram, which is a user-friendly pictorial representation of mathematical tool, could be applied to predict a numerical probability of an event for an individual patient[14].

Therefore, the purpose of this study was to establish a preoperative nomogram incorporating morphological and DCE features to individually predict the risk of malignancy in patients with breast tumor.

A total of 447 consecutive female patients who were suspected to have solid breast tumor (BI-RADS 4 and 5) on MRI examination were enrolled from March 2015 to January 2018. Our institutional review board approved this retrospective study and waived the requirement for informed consent. The inclusion criteria were as follows: 1) age >20; 2) underwent breast biopsy or surgical excision; 3) underwent MRI examination; The exclusion criteria were as follows: 1) underwent neoadjuvant chemotherapy; 2) non-mass enhancement (NME) or multiple masses. The patients were separated into two cohorts: the primary cohort (n=326) and the validation cohort (n=121).

All MRIs were performed with a 1.5 T MRI scanner (Magnetom Avanto; Siemens Medical Solutions, Erlangen, Germany) using an 8-channel breast coil with the patient positioned in the center of the magnet in the prone position. Axial dynamic contrast-enhanced images using a 3D T1-weighted volume interpolated body examination (T1W-VIBE) sequence (TR/TE, 4.6/1.5 msec; flip angle, 10°; FOV, 360×360 mm2; matrix, 205 ×256; slice thickness, 2mm and gap, 0 mm) were acquired before and eight dynamic scans after a bolus injection of 0.2mmol/kg Gd-DTPA (Omniscan, GE Healthcare, Ireland) at a rate of 2ml/s, followed by a 20-ml saline flush. In the postprocessing workstation, the region of interest was placed in the enhancement of the largest slice of the tumor to obtain a kinetic curve.

According to the BI-RADS [12], morphological and DCE features were independently reviewed by two radiologists (with 8 years and 5 years of experience in breast imaging) without knowledge of the histopathological diagnosis. If the assessments were inconsistent, a consensus was reached by the senior radiologist. The morphological features included tumor size, shape (oval, round or irregular), and margin (circumscribed or non-circumscribed). The DCE features included internal enhancement characteristics (homogeneous or non-homogeneous) and the delayed enhancement features of the kinetic curve (persistent or non-persistent). In addition, age and tumor location were also included.

Construction of the MRI-based nomogram

The MRI-based nomogram performance was quantified with respect to the discrimination, calibration ability and clinical utility. The Hosmer-Lemeshow test was used to evaluate the goodness-of-fit of the MRI-based nomogram, and the area under the curve (AUC) value of receiver operating characteristic curve (ROC) was carried out to quantify the discrimination ability of the nomogram. Subsequently, a calibration curve was performed to assess the calibration ability of the nomogram. Decision curve analysis was used to evaluate the clinical utility of the model by calculating the net benefits for a range of threshold probabilities.

Our study population consisted of 447 female patients. The age of included patients ranged from 24 to 78 years, with a mean age of 49 years. The median tumor size was 25mm. Of the 447 breast masses identified in 447 patients, 375 were malignant and 72 were benign. The baseline characteristics of our study were showed in Table 1.

Predictors of malignancy based on MRI findings

Development of the MRI-based nomogram

Evaluation of the MRI-based nomogram performance

Univariate and multivariate logistic regression analyses in the primary cohort

The MRI-based nomogram to predict the risk of malignancy in patients with breast masses based on MRI findings. 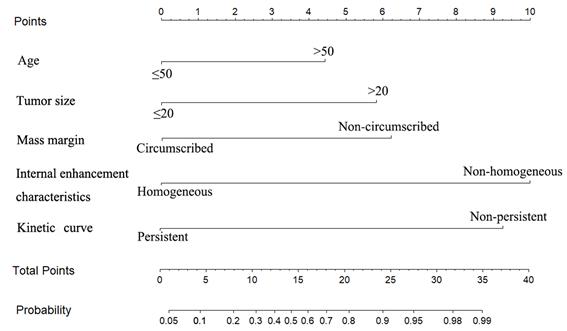 The ROC curve of MRI-based nomogram in the primary cohort and the validation cohort.

Calibration curve of the MRI-based nomogram to predict the risk of malignancy in patients with breast masses. 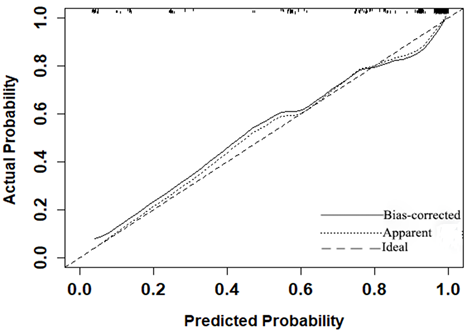 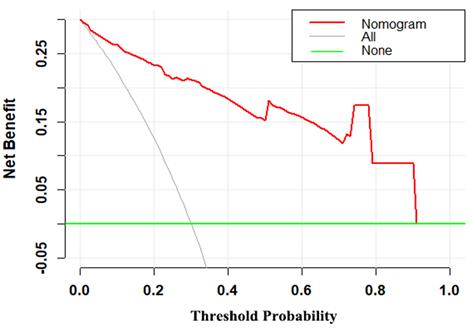 MRI-based nomogram score for each variable

The decision curve demonstrated that the MRI-based nomogram had good clinical utility across the wider range of threshold probability (Fig 5).

Our study developed a non-invasive preoperative nomogram for predicting the risk of malignancy in patients with breast masses based on MRI findings. Three MRI parameters were adopted as independent indicators to estimate the probability of malignancy in the MRI-based nomogram, including mass margin, internal enhancement characteristics and kinetic curve. Similarly, several prior studies had revealed breast masses with irregular shape, spiculated margin and plateau or washout patterns curve had greater probability of malignancy [11,22-25]. Mass shape does appear to be a potential independent variable of malignancy. Nevertheless, in the present study, mass shape was confirmed as an indicator of malignancy in a univariate analysis but lost the statistical significant when added to the multivariate analysis, which was in line with previous study [22]. Multiple previous studies have combined the morphologic and DCE features to evaluate the likelihood of malignancy for breast MRI masses based on BI-RADS MRI descriptors [22,23]. However, these reports only identified which BI-RADS descriptors were associated with malignancy, cannot provide objective individualized risk prediction in patients with breast mass. Thereby, providing individualized risk prediction by a practical tool remained absence.

There are some limitations in the study. First, most cases were malignant, but the result was significant. Second, this study was conducted at one institution and was a retrospective study. the multicenter validation studies should be performed before its clinical application in the future. Third, future investigations are needed to establish a preoperative nomogram for predicting the risk of malignancy in patients with non-mass enhancement. Fourth, the initial enhancement feature of the kinetic curve was not included in our study.

In summary, the proposed MRI-based nomogram, a preoperative prediction tool which incorporates the morphological and DCE features, suggests favorable predictive accuracy for malignancy in patients with breast masses and makes effective risk stratification in the diagnosis setting. The MRI-based nomogram may be used as an important decision-making tool in differentiating malignant from benign breast masses and reducing unnecessary breast biopsy in the low-risk patients.

This study has received funding by the National Natural Science Foundation of China (81972467, 81472731, 82002928), the grants from Key Laboratory of Malignant Tumor Molecular Mechanism and Translational Medicine of Guangzhou Bureau of Science and Information Technology (Grant [2013]163), from the Key Laboratory of Malignant Tumor Gene Regulation and Target Therapy of Guangdong Higher Education Institutes (KLB09001), from Guangdong Science and Technology Department (2015B050501004), and from the Doctor Launch Fund of Guangdong Provincial People's hospital (2020bq11).