CircRNA occurs in splicing procedure of transcription, and single-stranded RNA molecules shape a circle through covalent bonds [15]. Despite circRNA was found decades ago, it was originally thought to be from errors of RNA splicing [15]. CircRNA had been demonstrated to have an important role in cancer cells. For example, circRNA-ITCH inhibits the expressions of miRNA-7, miRNA-17 and miRNA-214 in esophageal squamous cell carcinoma by sponge adsorption [16]. CircRNA hsa_CircRNA_101996 induced cervical cancer cell viability and invasion by motivation of TPX2 which functioned as repressor of miR-8075[17]. Bioinformatics analysis indicated that circRNAs participated in metabolism of glucose, cell cycle of mitosis and production of ovarian steroid [18, 19]. Circular RNA-HIPK3 increased the occurrence of EMT in ovarian cancer by activating miR-338-3p, followed by up-regulating HIF-1α [20]. However, the roles of circRNAs in ovarian cancers remained unclear.

SKOV3 and A2780 were derived from American Type Culture Collection (ATCC) and kept in RPMI-1640 medium supplied by 10% FBS (Thermo Fisher, USA) with penicillin (50 U/mL)/streptomycin (50 μg/mL) (Thermo Fisher, USA). All indicated siRNA and respective negative control (NC) were constructed by Shanghai Genepharma Company (China). CircPVT1-specific siRNAs and si-NC, as well as miR-149-5p mimics/inhibitor, were all designed by and obtained from Shanghai Sangon Biotech Corp. (Shanghai, China). 100 nM RNA oligonucleotides were transfected into indicated cells by LipofectamineTM 2000 (Invitrogen, Waltham, USA). All the transfected cells were collected at 48 h post-transfection for the following use.

2×105 cells in each well were inoculated in 96-well plates. Medium was used as blank control. At post-hypoxiareoxygenation, indicated cells in per well were added 10 μL of CCK-8 (Beyotime Institute of Biotechnology, Beijing, China) solution, and kept at 37°C for 2 h. The OD value of 450 nm was detected. The final data was represented as cell viability, as previous study described [21].

In this study, candidate miRNAs related to circPVT1 were forecasted by virtue of public bioinformatics tool Starbase (http://starbase.sysu.edu.cn/panCancer.php) and CircInteractome (https://circinteractome.nia.nih.gov/). A total of 9865 potential targets of circPVT1 were obtained. Then, we extracted different expressed genes in OV using GEPIA datasets. Finally, we constructed a circPVT1 associated ceRNA network using cystoscope software [22].

Prism GraphPad 7.0 software was applied to analyze data in this literature. The presented data was shown as mean ± standard deviation (SD). Difference existing in two or multiple groups was assessed by one-way ANOVA. Significant difference means P value is not more than 0.05.

PVT1 is overexpressed in ovarian tissues 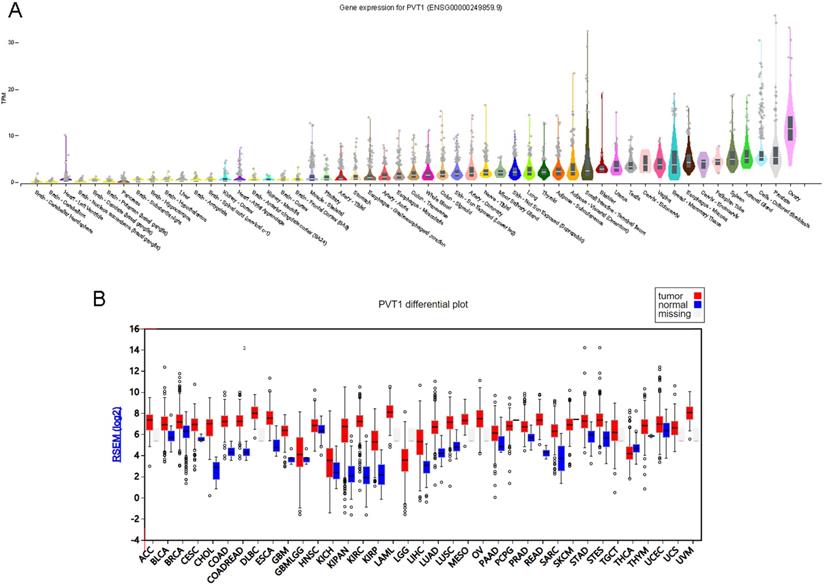 Then, we detected whether PVT1 was differently expressed in human cancer. As present in Figure 1, the results showed that PVT1 was up-regulated in BLCA, BRCA, CESC, COAD, ESCA, GBM, KICH, KIPAN, KIRC, KIRP, LIHC, LUAD, LUSC, PRAD, STAD and STES. Very interestingly, we also observed PVT1 was overexpressed in OV compared to many types of normal tissues (Figure 1B).

To investigate the biological roles of circPVT1 in OV, we performed loss-of-function experiments in OV cell lines. Compared to linear RNA, back-splicing site was the circRNA-specific sequence. SicircPVT1 was designed to target the back-splicing site (Figure (Figure 2A). Then, qPCR analysis revealed that circPVT1 level in si-circPVT1-1 treated groups was weaker than that in si-NC treated group, indicating successful transfection (Figure 5A and C). However, the expression level of lncRNA PVT1 was not affected after si-circPVT1-1 transfection in OV cells. In the following experiments, si-circPVT1-1 was chosen and named as si-circPVT1. Normalized cell viability in circPVT1-transfected SKOV3 and A2780 cells was obviously enhanced compared to that in NC-transfected group. In addition, normalized cell viability in si-circPVT1-transfected group was reduced than that in si-NC-transfected group (Figure 5B and D). Meanwhile, we found that knockdown of circular PVT1 significantly suppressed invasion (Figure 5E-G) and migration (Figure 5H-J) in SKOV3 and A2780. 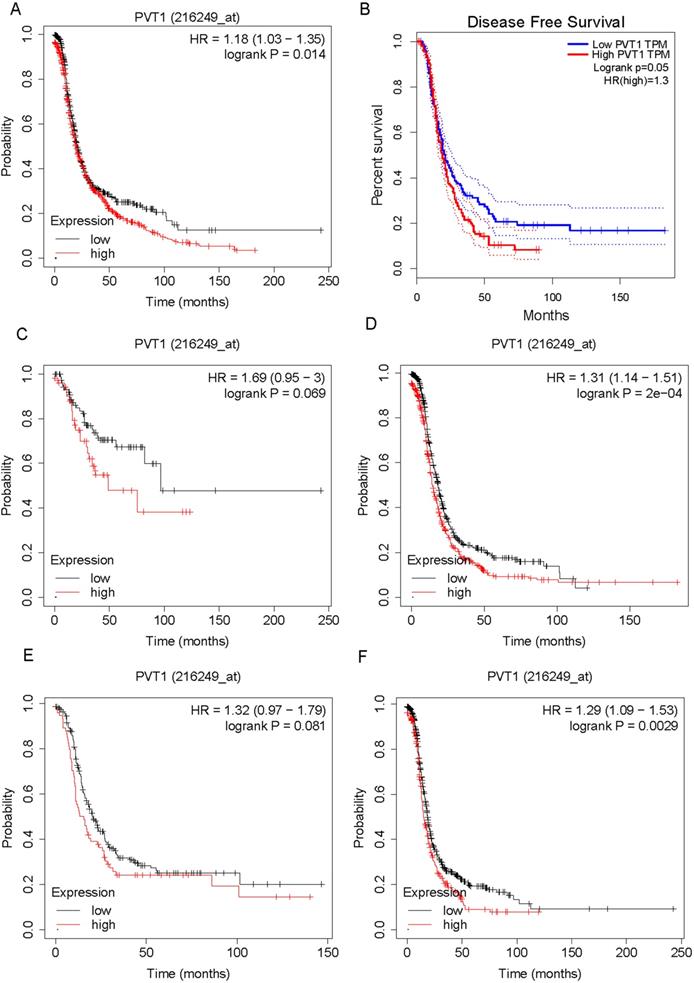 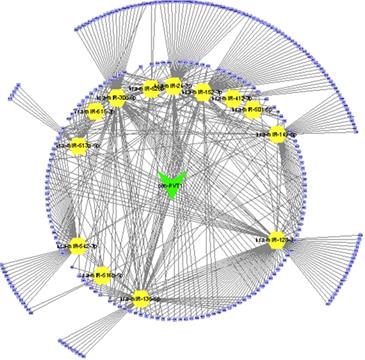 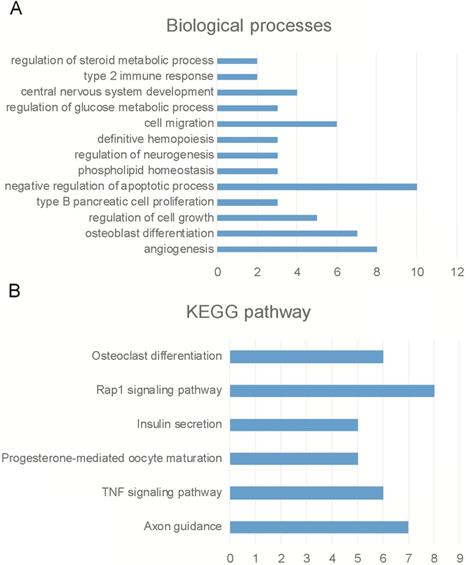 TargetScan dataset was executed to search out targets of miR-149-5p (Figure 7A). Luciferase experiment suggested that miR-149-5p bond to 3′-UTR region of FOXM1 (Figure 7B). Subsequently, our data indicated that reduced miR-149-5p level resulted in upregulation of FOXM1 mRNA and protein level in SKOV3 and A2780 cells, compared to NC-transfected group (Figure 7C and D). Our data implied that FOXM1 was a direct target of miR-149-5p. 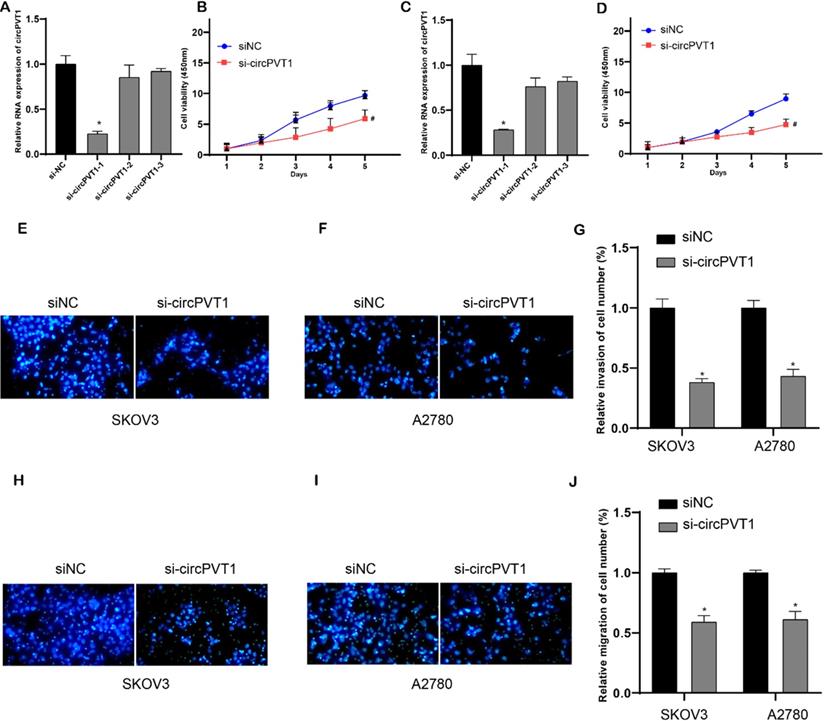 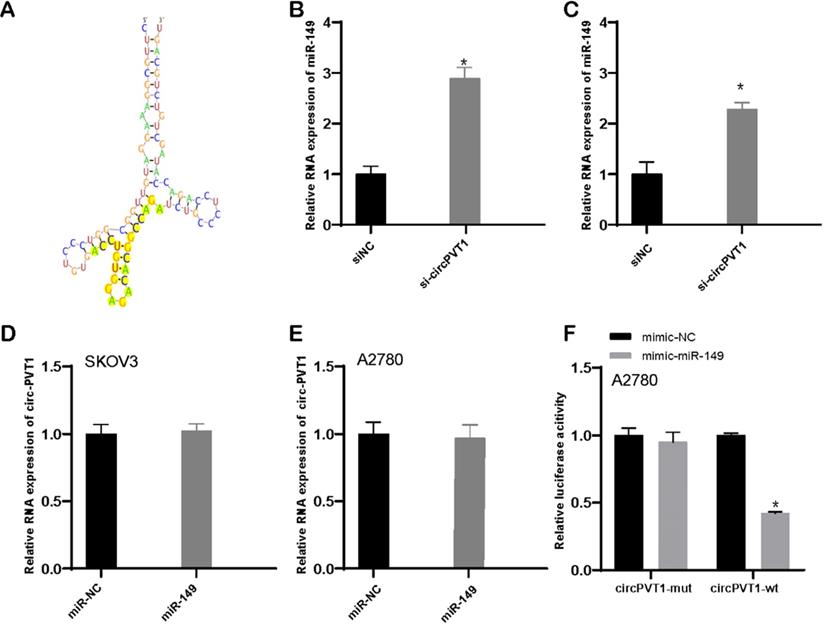 Figure 8A illustrated FOXM1 was increased highly in OV tissues when compared with that in normal tissues. Ovarian cancer patients with high-expressed FOXM1 presented worse survival than those with low-expressed FOXM1 (Figure 8B). Then, we knockdown and overexpressed FOXM1 in the SKOV3 and A2780 cells (Figure 8C and D). Following data demonstrated that increased FOXM1 induced cell viability. However, reduced FOXM1 could cause inhibition of cell viability (Figure 8E and F). Our data implied that FOXM1 functioned importantly in promotion of tumor growth.

PVT1 is an extremely dysregulated gene in malignancy and is reported to have association with oncogenesis [25]. PVT1 level is increased in multiple types of human cancer, comprising ovarian cancer [13, 14], breast cancer [26, 27] and non-small cell lung cancer [28, 29]. PVT1 functioned importantly in promoting cancer viability, autophagy and metastasis [30]. For example, C-Myc-promoted PVT1 induced cervical cancer cell growth by virtue of sponging miR-486-3p [31]. LncRNA PVT1 mediated promotion of cervical cancer cell viability and invasion via increasing smad3 level, which was responsible for sponging miR-140-5p [32]. In ovarian cancer, PVT1 was found to promote tumor progression by silencing miR-214 [13]. This study also showed PVT1 mRNA overexpression was correlated to shorter survival time in patients with OV. Here, our findings identified the function and mechanism of circPVT1 and FOXM1 involved in ovarian cancer, indicating circular PVT1-mediated regulation of cell apoptosis and metastasis by way of targeting miR-149-5p axis. We presumed our study would give a new hint of uncovering biomarker for ovarian cancer. 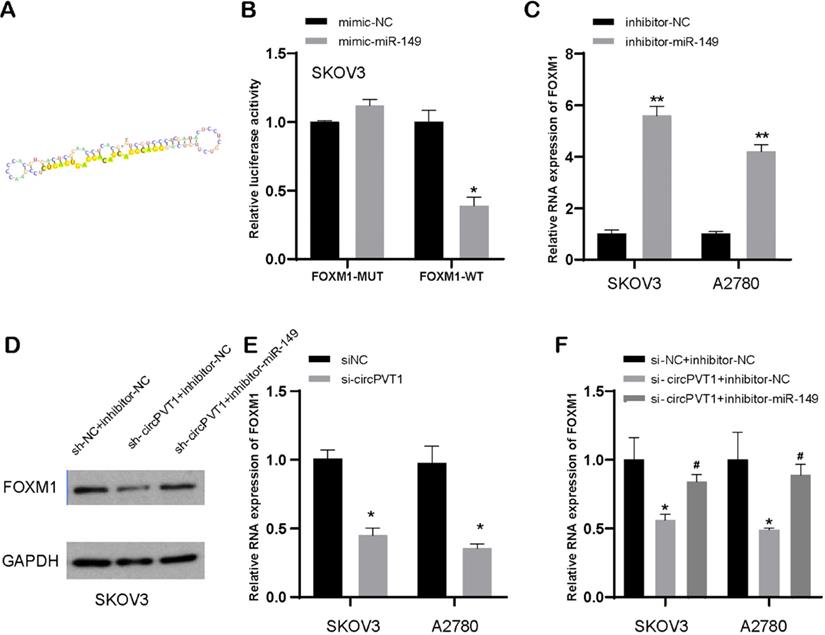 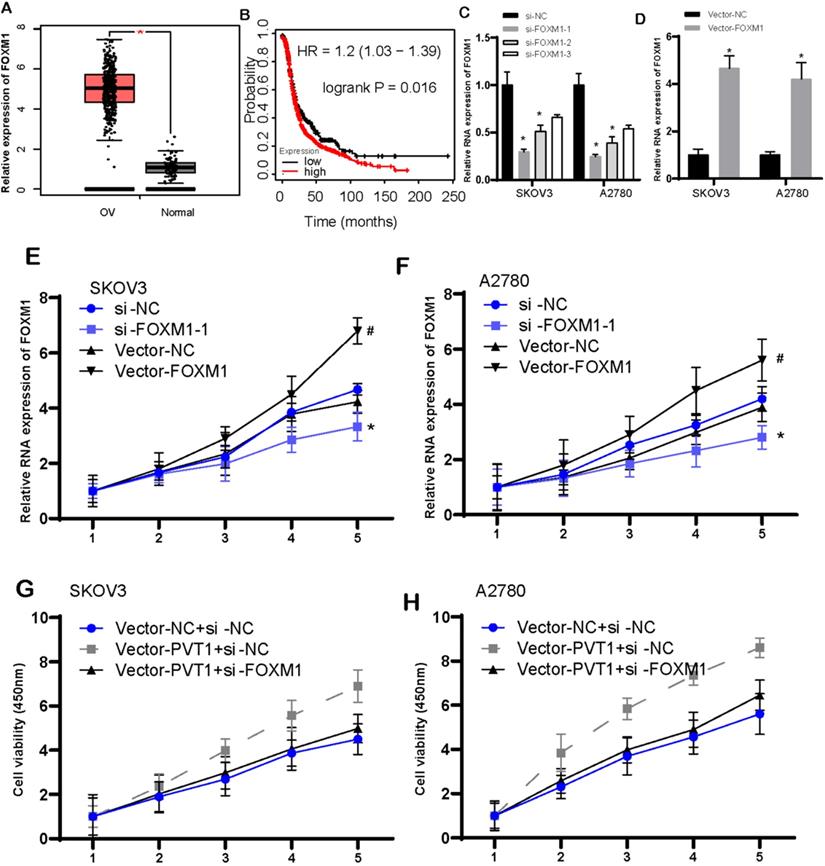 FOXM1 is a member of FOX transcription factor family 1 and is shown to be related to the process of cell viability and considered as one key prey in carcinogenic pathway. New studies indicated that FOXM1 participated in drug resistance, canceration and metastasis of tumors [52-54], so inhibiting FOXM1 may be a promising tactic for tumor treatment. Previously, several researches have shown that FOXM1 is overexpressed in multiple cancers, such as breast cancer, ovarian cancer, colon cancer, liver cancer, pancreatic cancer, ovarian cancer and gastric cancer [55]. FOXM1 is modulated by carcinogenic signals, comprising lots of key factors, such as p53. Nevertheless, no studies towards FOXM1-induced effects and mechanism in ovarian cancer were shown. Our data revealed that FOXM1 expression level was raised in ovarian cancer and interlinked to the degree of malignancy and poor survival of patients with ovarian cancer. Further experiments verified that FOXM1 impelled cell proliferation and suppressed cell apoptosis. In vitro and in vivo experiments revealed that reduced FOXM1 level can rescue the effects induced by increased circular PVT1 on tumor viability. Our literature identified the mechanism of FOXM1 in tumor genesis [37].

Despite our study's promising findings, there were still limitations. The functions of circular PVT1 were explored based on in vitro assays in this study. The further confirmation in vivo will be performed in the future study. In addition, the bioinformatics analysis revealed circular PVT1 multiple pathways, including regulating angiogenesis, regulation of cell growth, regulation of apoptotic process, cell migration, and type 2 immune response. In this study, we focused on confirming the effects of Circular PVT1 on cell proliferation and migration. In the future study, we will pay attention on angiogenesis and type 2 immune response. Finally, we will collect more clinical samples and detected the expression levels of circular PVT1, miR-149-5p and FOXM1 in OV using RT-PCR assay to further confirm the clinical significance of these genes.