Prognostic Factors of Survival with Aflibercept and FOLFIRI (fluorouracil, leucovorin, irinotecan) as Second-line Therapy for Patients with Metastatic Colorectal Cancer

Background: Aflibercept and fluorouracil, leucovorin, irinotecan (FOLFIRI) is commonly used as a second-line treatment for metastatic colorectal cancer (CRC). However, the biomarkers to guide the choice of this regimen from among treatment options remain unclear.

Patients and Methods: We performed exploratory analyses to validate potential prognostic factors for patients receiving aflibercept plus FOLFIRI as a second-line systemic treatment for metastatic CRC between January 2015 and July 2019. Patient characteristics, histopathologic data, laboratory and radiologic data, and treatment outcomes were collected and reviewed.

Results: Included were 52 patients: 50 (96.2%) received bevacizumab plus fluorouracil, leucovorin, oxaliplatin (FOLFOX) as prior first-line treatment. Among the 52 patients receiving aflibercept and FOLFIRI, four complete responses and 21 partial responses were observed in analyzed patients for an overall response rate of 48.1%. Median progression-free survival (PFS) was 7.0 months and overall survival (OS) was 16.8 months. Response to first-line treatment (median PFS, 8.0 versus 4.2 months), left-side location of primary tumor (7.9 versus 4.9 months), low baseline CEA level (8.0 versus 5.9 months), and no RAS/RAF mutation (9.9 versus 6.4 months) were remained significant prognostic factors for PFS in the multivariate backward stepwise Cox regression model, and the latter three factors were also significantly related to OS.

Colorectal cancer (CRC) is the fourth leading cause of cancer-related deaths in men and the third leading cause of cancer-related deaths in women worldwide [1]. Approximately 30% of CRC patients present with metastatic disease at the time of diagnosis, and 50% with localized tumors will develop metastasis later after surgery [2]. Despite recent advances in treatment modalities, the 5-year survival rate for metastatic CRC is approximately 14% [3].

Standard palliative chemotherapy for metastatic CRC is a fluorouracil-based treatment combination with oxaliplatin or irinotecan, and with or without biological agents including anti-angiogenesis or anti-epidermal growth factor receptor (EGFR) monoclonal antibodies. The majority of patients are treated with a biological agent as first-line systemic treatment mainly according to RAS/RAF mutation status of tumors [4]. Current guidelines recommend bevacizumab plus chemotherapy for KRAS/NRAS mutated tumors and either an anti-EGFR agent or bevacizumab for KRAS/NRAS wild-type tumors as first-line treatment options [5]. Second-line treatment often depends on first-line chemotherapy regimens. Fluorouracil, leucovorin, irinotecan (FOLFIRI) with biological agents as second-line therapy can be used with patients with failed fluorouracil, leucovorin, oxaliplatin (FOLFOX) or capecitabine, oxaliplatin (CAPEOX) plus bevacizumab treatment, which are some of the most commonly used first-line combination treatments.

Aflibercept, a recombinant anti-angiogenic protein, selectively blocks VEGF-A, VEGF-B, and placental growth factor [6], precluding downstream effects including angiogenesis and metastasis. This effect is different from bevacizumab, which selectively inhibits only VEGF-A. The phase III VELOUR trial evaluated the efficacy of aflibercept plus FOLFIRI as second-line treatment for patients with metastatic CRC who had progression following an oxaliplatin-based regimen, with or without bevacizumab [7]. The study found that aflibercept plus FOLFIRI significantly prolonged median overall survival (OS) (13.5 versus 12.1 months) and progression-free survival (PFS) (6.9 versus 4.7 months) compared to the control group.

Although there is a need for consideration of some issues like molecular profile, performance status, comorbidities, and sidedness of tumor, bevacizumab plus oxaliplatin-based regimen is thought to be the most commonly used combination as front-line systemic chemotherapy for metastatic CRC [8, 9]. It has some advantages over anti-EGFR agents even in RAS/RAF wild type tumor; there is no waiting turnaround time for molecular analysis, and relatively lower toxicity was reported in several studies [10, 11]. As aflibercept plus FOLFIRI is the practical alternative for bevacizumab plus FOLFIRI as second-line treatment in this setting, we analyzed the real-world treatment outcome of second-line aflibercept plus FOLFIRI for metastatic CRC patients, the majority of whom received bevacizumab plus FOLFOX previously. Additionally, exploratory analyses to investigate potential biomarkers to predict the clinical efficacy of the combination treatment were performed.

Patients were eligible when they had been treated with second-line aflibercept plus FOLFIRI as part of routine clinical practice. Patients who had received prior irinotecan-containing regimens or aflibercept plus chemotherapy other than FOLFIRI were excluded.

Overall response was classified as complete response (CR), partial response (PR), stable disease (SD), or progressive disease (PD) according to the Response Evaluation Criteria in Solid Tumors guidelines version 1.1. To protect the personal information of patients and privacy of the data, all data were handled anonymously. The trial protocol was approved by the institutional review board of Samsung Medical Center and Inha University Hospital and conducted in accordance with the Declaration of Helsinki.

A total of 52 patients, 46 from Samsung Medical Center and 6 from Inha University Hospital, with metastatic CRC receiving aflibercept plus FOLFIRI as second-line therapy were analyzed. Patient baseline characteristics according to response to aflibercept plus FOLFIRI are in Table 1. The median age was 59.0 years (interquartile range, 51-67 years) with 24 (46.2%) males and 28 (53.8%) females. As prior first-line treatment, two (3.8%) patients received CAPEOX and all other patients received bevacizumab plus FOLFOX. Thirty-two (61.5%) patients had surgery for CRC and metastatic sites if possible, and 30 (57.7%) patients had tumors with mutations in the RAS/RAF pathway, while RAS/RAF mutational status was not available for three (5.8%) patients.

Kaplan-Meier plot. (A) progression-free survival and (B) overall survival for total included patients.

Correlation between patient clinicopathological characteristics and PFS was assessed to investigate potential biomarkers that could predict the effects of aflibercept plus FOLFIRI. In univariate Cox regression analysis, response to first-line treatment (non-responder, SD/PD versus responder, CR/PR), previous surgery for disease (yes versus no), primary tumor location (right versus left), number of organ metastasis (≥2 versus 1), baseline CEA level (<5 ng/mL versus ≥5 ng/mL), and RAS/RAF mutation (yes versus no) were significantly associated with PFS (Table 2). In multivariate backward stepwise Cox regression analysis including variables with p-value < 0.1 on univariate analysis showed that response to first-line therapy (median PFS, 8.0 versus 4.2 months), left-side location of primary tumor (7.9 versus 4.9 months), low baseline CEA level (8.0 versus 5.9 months), and no RAS/RAF mutation (9.9 versus 6.4 months) were independently correlated with PFS in the final model (Figure 2). Kaplan-Meier survival curves for PFS for the variables are in Supplementary Figure S1-3.

In the univariate Cox regression model for OS, previous surgery for the disease (yes versus no) and baseline CEA level were significantly correlated with OS. The multivariate backward stepwise Cox regression model including variables with P<0.1 on univariate analysis demonstrated that location of primary tumor, baseline CEA level, and RAS/RAF mutational status remained in the final model (Supplementary Figure S4).

This study provides clinical-pathological biomarkers that are easily available in clinical practice to select a CRC patient population that is likely to benefit from aflibercept plus FOLFIRI as second-line therapy. Response to first-line treatment (median PFS, 8.0 versus 4.2 months), left-side location of primary tumor (left, 7.9 versus right, 4.9 months), low baseline CEA level (8.0 versus 5.9 months), and no RAS/RAF mutation (9.9 versus 6.4 months) were significant prognostic factors for PFS to aflibercept plus FOLFIRI. Furthermore, the location of the primary tumor, baseline CEA level, and RAS/RAF mutational status were also significantly related to OS. This finding might be helpful for deciding among options for second-line treatment.

CEA is highly upregulated by various cancers and in about three-fourths of metastatic CRC patients [12]. Baseline increased CEA levels correlate with poor prognosis [13]. In a previous study on the predictive role of baseline CEA level for FOLFIRI plus cetuximab or bevacizumab as first-line therapy, high CEA level was associated with shorter OS in patients receiving FOLFIRI plus bevacizumab. The finding was not inconsistent with findings for patients receiving FOLFIFI plus cetuximab [14]. Fiala et al. reported that baseline CEA level does not affect PFS or OS of patients treated with chemotherapy plus an anti-EGFR agent in combination [15]. Another study on a proposed prognostic nomogram for FOLFIRI plus aflibercept included baseline CEA level as a significant influencer [16]. These observations might be explained by that CEA exerts angiogenesis-promoting effects independent of VEGF, and increased CEA levels could achieve some angiogenic properties even when the VEGF pathway is blocked [17, 18]. In our study, low baseline CEA level (<5 ng/mL) was significantly associated with prolonged median PFS with FOLFIRI plus aflibercept compared to high CEA level (≥5 ng/mL) (8.0 versus 5.9 months), consistent with the other studies. 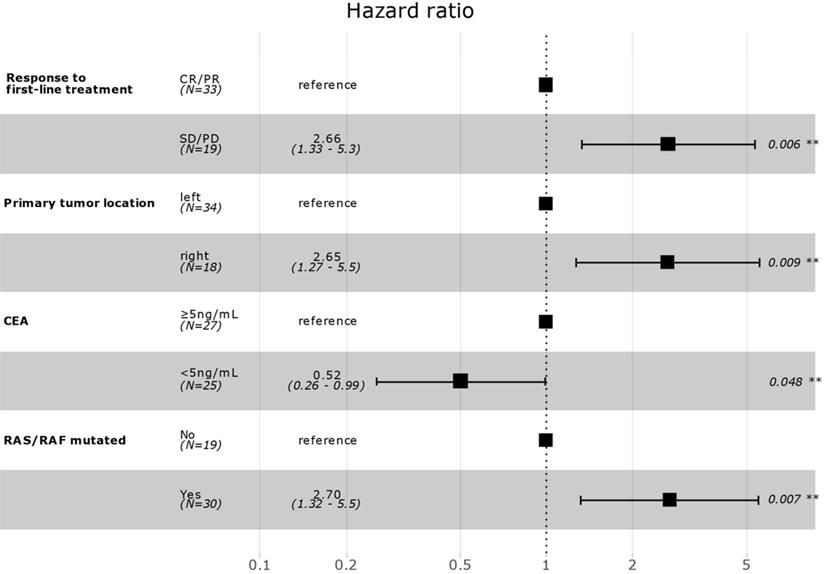 This study has several limitations. First, a relatively small number of patients treated with aflibercept plus FOLFIRI as a second-line therapy were included. Additionally, due to a few missing observations for RAS/RAF mutation status, these mutation profiles were handled as the same group. Next, the retrospective characteristics of the study and exploratory analyses are subject to potential biases from a statistical perspective. Third, the number of factors included in the multivariate analyses was relatively high, considering the total number of patients and events. Despite these inherent limitations, our study analyzed and validated prognostic factors for survival outcomes with aflibercept plus FOLFIRI in the CRC patients who received bevacizumab plus FOLFOX as first-line therapy. These findings could provide useful information for selecting patients for aflibercept plus FOLFIRI as second-line therapy.