Emerging evidence indicates that long noncoding RNAs (lncRNAs) are closely associated with colorectal cancer (CRC) tumorigenesis. One example is lncRNA Deleted in Lymphocytic Leukemia 2 (DLEU2). However, how DLEU2 contributes to CRC is still poorly understood. This study sought to investigate the effects of DLEU2 on CRC pathogenesis, and the underlying mechanism involved. Using a quantitative real-time polymerase chain reaction (qRT-PCR) assay, we demonstrated that the expression levels of DLEU2 in 45 pairs of CRC tissues were higher than those in the corresponding normal colon mucosal tissues. In addition, CRC patients with high DLEU2 expression levels exhibited poor overall survival (OS) and recurrence-free survival (RFS), as determined by analyses and measurements from the GEO and GEPIA databases. When DLEU2 was silenced using short interfering RNA (siRNA) in CRC cell line, the results demonstrated that DLEU2 silencing suppressed CRC cell tumorigenesis in vitro, which was associated with decreased expression of cyclin dependent kinase 6(CDK6), ZEB1, and ZEB2 as well as enhancing the expression of Cyclin-dependent kinase inhibitor 1A (CDKN1A). Taken together, the results of this study suggested that DLEU2 may play critical roles in the progression of CRC and may serve as a prognostic biomarker for CRC.

Colorectal cancer (CRC) is the third most commonly diagnosed malignancy and the second leading cause of cancer-related deaths worldwide [1-3]. According to epidemiological investigations, in 2012, there were approximately 1.36 million new cases of CRC, and approximately 690,000 deaths, ranking fourth among all malignant tumors [1]. With the development of therapeutic approaches, substantial progress has been achieved in treating CRC over the past decades. However, the CRC mortality rate has not changed due to tumor cells metastasis [4,5]. CRC progression has been identified as a multistep process that involves inherited and environmental factors [6,7]. With the popularity of high-throughput sequencing and molecular therapy, an increasing number of studies have focused on the molecular pathogenesis of CRC, with the aim of exploring suitable biomarkers for identifying the progression and development of CRC [8-10].

Long non-coding RNAs (lncRNAs) are a class of non-coding RNAs (ncRNAs) defined by a transcript length of 200-100,000 nt, and a lack of a complete functional open reading frame (ORF) [11-14]. The molecular functions of lncRNAs at the epigenetic, transcriptional, and post-transcriptional levels are conventionally subdivided as follows: 1) acting as host genes for miRNAs; 2) functioning as decoys; 3) acting as a co-regulator or co-repressor; 4) recruiting and interacting with proteins; and 5) interacting with miRNAs. LncRNAs play important roles in the aspects of tissue differentiation and reproduction, individual development, and immunity [11-14]. Recent studies have shown that lncRNAs play an important role in various cancers, such as nasopharyngeal carcinoma [15], CRC [16], gastric cancer [17], glioblastoma [18], and cervical cancer [19]. These lncRNAs with dysregulated expression may be potential biomarkers valuable in the screening, diagnosis, and therapy of cancers.

In this study, we analyzed two previously published online datasets to analyze the dysregulated expression of lncRNAs in CRC. We found that Deleted in Lymphocytic Leukemia 2 (DLEU2) was significantly overexpressed in the two CRC datasets. DLEU2 is located in the chr13q14.2 region and was originally identified as an important tumor regulator gene [20], whereas little is known concerning the functions and mechanisms of DLEU2 involvement CRC tumorigenesis. In this study, we showed that DLEU2 was overexpressed in CRC tissues and cell lines, and high expression levels in CRC patients were associated with poor overall survival (OS) and recurrence-free survival (RFS). Furthermore, DLEU2 knockdown in CRC cells inhibited malignant proliferation and metastasis. Taken together, these results suggested that DLEU2 may play a critical role in the progression and development of CRC.

A total of 45 CRC lesions and matched adjacent tissues obtained from newly diagnosed CRC patients were collected at the Xiangya Hospital of Central South University. This study was approved by the hospital Research Ethics Board of Xiangya Hospital of Central South University, and all participants provided informed consent for inclusion in the study.

When cell densities reached almost 60%, 50 nM siRNA-DLEU2 oligo or a negative control (siRNA-NC) were transfected using Lipofectamine 3000 (Invitrogen, USA) according to the manufacturer's instructions. The sequences of the DLEU2 targeting siRNAs were: siRNA-DLEU2-1, 5'- AGUCUACGUUGGAGGUAAA -3'; and siRNA-DLEU2-2, 5'- AAGUAUUCAAUCAAAGAAGUG -3'; Sequences of non-target scramble controls were provided by RiboBio (Guangzhou, China).

Approximately 1 × 107 HT29 cells were collected in order to determine the cellular localisation of DLEU2. Nuclear and cytoplasmic RNAs were collected using a PARIS Kit (Invitrogen). The computing methods employed were described previously [28].

RNA isolation and amplification and quantitative real-time polymerase chain reaction (qRT-PCR) were performed as described previously [29]. The thermocycling program used was as follows: 95°C for 30 sec, followed by 40 cycles of 60°C for 30 sec and 72°C for 30 sec. Primer sequences for qRT-PCR are shown in Table 1.

Cell lysis, electrophoresis, and target protein visualisation were performed according to the methods described previously [32].

Transwell Matrigel assay were performed using a 24-well transwell plate (8-μM pore size, Costar, America) to detect the invasiveness of CRC cells according to previously described methods [33]. Briefly, the number of invasive tumor cells was calculated from the total number of cells from three randomly selected 20× fields for each experiment. The histogram represents data from three independent experiments.

All statistical analyses were performed using GraphPad Prism v.7.0 software and Statistical Package for the Social Sciences version 18.0. Data are shown as mean ± standard error of the mean (SEM), and the results of analysis were considered significant in log-rank tests if p < 0.05.

DLEU2 is upregulated in CRC

To identify dysregulated lncRNAs in CRC, we analyzed three online GEO datasets (#GSE37364, GSE23878, and GSE41328) based on the Affymetrix Human Genome U133 Plus 2.0 platform. lncRNA DLEU2 was significantly upregulated in CRC tissues compared with non-tumor tissues (p < 0.05, Fig. 1A-C). Furthermore, we detected DLEU2 expression in 45 matched pairs of CRC samples and adjacent non-tumor tissues, and our results indicated that DLEU2 was more highly expressed in CRC tissues than in the adjacent non-tumor tissues (p < 0.05, Fig. 1D). DLEU2 expression levels were also determined by qRT-PCR in five CRC cell lines (SW480, HT29, LoVo, SW620, and CaCO2) and in the normal colon mucosal cell line NCM460. DLEU2 expression was higher in CRC cell lines than in NCM460 cells (all p < 0.05, Fig. 1E), and DLEU2 expression was highest in HT29 cells. Moreover, we analyzed the nuclear and cytoplasmic distribution of DLEU2 and found that the expression of DLEU2 was higher in cytoplasm, indicating that the subcellular localization of DLEU2 in CRC cells was primarily cytoplasmic (Fig. 1F).

Association between DLEU2 expression and clinicopathological features of CRC

DLEU2 is upregulated in CRC. (A) #GSE37364 (38 normal colon samples and 56 primary CRC samples), (B) #GSE23878 (24 normal colon samples and 35 primary CRC samples) and (C) #GSE41328 (containing 10 pairs of CRC tissues and corresponding normal colorectal tissues) identified in the GEO database were used to analyze the expression of DLEU2. (D) DLEU2 was highly expressed in the 45 pairs of CRC tissues compared with the corresponding normal colorectal tissues. (E) DLEU2 expression was significantly increased in CRC cell lines (SW480, HT29, LoVo, SW620, and CaCO2) compared with NCM460, a normal colon mucosal cell line. (F) Nuclear and cytoplasmic RNA were analyzed by qRT-PCR to detect the expression levels of DLEU2 in HT29 cells. GPADH and β-Actin were used as cytoplasmic RNA controls; U6 was used as a nuclear RNA control. Data are shown as means ± SEM. *p < 0.05, **p < 0.01, ***p < 0.001 compared with control. 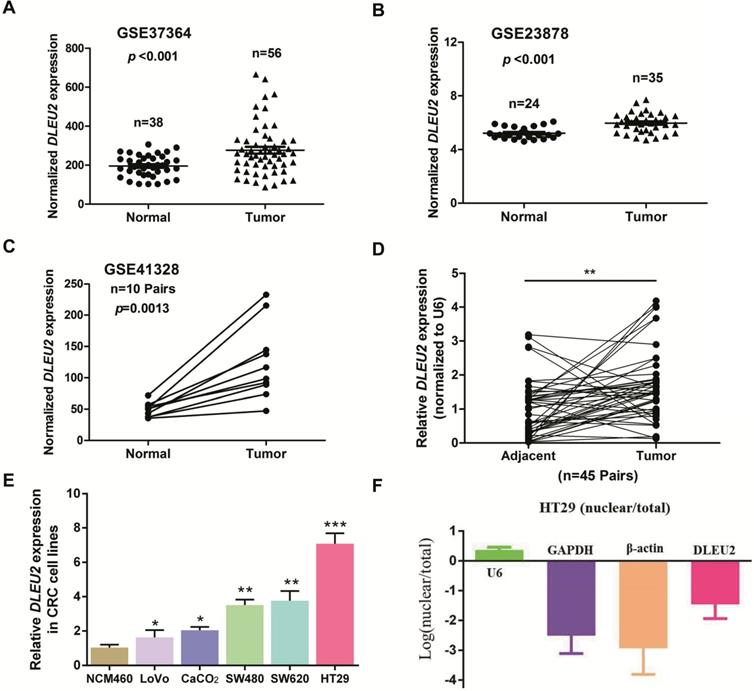 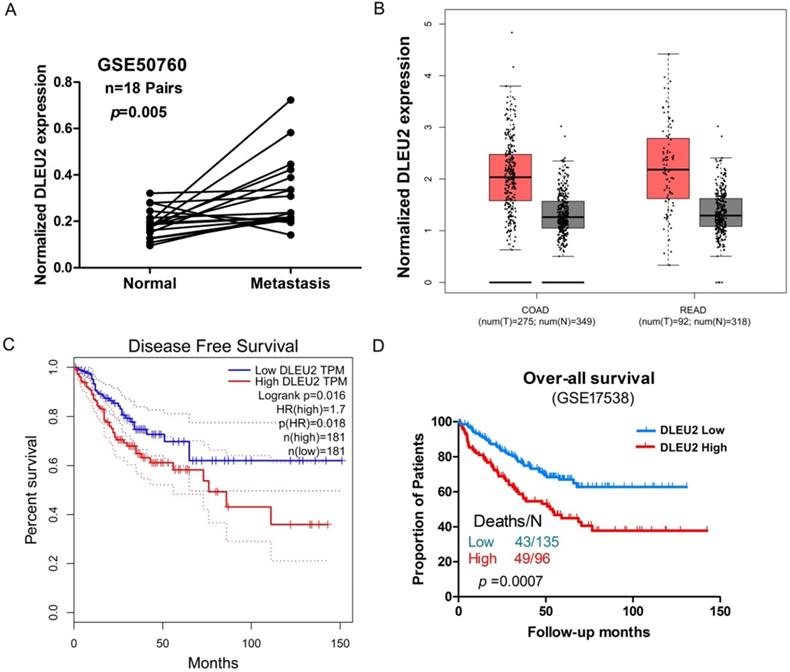 Evidence from recent studies has demonstrated that lncRNAs regulate gene expression at the epigenetic, transcriptional and posttranscriptional levels [12, 35]. LncRNAs are also involved in the pathogenesis of many diseases, especially cancer. Disruption of lncRNA levels is closely correlated with cancer cell proliferation and apoptosis, EMT, and drug resistance [36, 37]. More and more lncRNAs have been reported as being differentially-expressed in CRC and with correlations involving poor prognosis, including MALAT1 [38], LINC01234 [39], AFAP1-AS1 [40], GAS5 [41], LINC00152 [42], NEAT1 [43], among others. lncRNAs are considered ideal biomarkers for tumor diagnosis and monitoring because they can be detected with high specificity and sensitivity, are easy to extract, and are stable in blood and tissues [44].

With the popularity of high-throughput sequencing and RNA-Seq gene microarray technologies, many public databases (for example TCGA, GEO, and Oncomine) have emerged as powerful tools to be used to predict and analyze potentially valuable lncRNAs [45]. In this study, we first analyzed dysregulated lncRNAs in CRC using three GEO datasets (#GSE37364, GSE41328, and GSE23878), and found that lncRNA Deleted in Lymphocytic Leukemia 2 (DLEU2) was significantly overexpressed in two CRC datasets. DLEU2, located in the chr13q14.2 region, was first reported in lymphocytic leukemia [46]. Recent studies have shown that DLEU2 is upregulated in many human cancers, such as non-small cell lung cancer (NSCLC) [47], esophageal adenocarcinoma [48], and osteosarcoma [49]. However, the roles and the mechanisms involving DLEU2 in CRC have rarely been reported. In this study, we found that overexpression of DLEU2 in CRC patients was associated with poorer RFS and OS, independently of other factors by multivariate analysis. 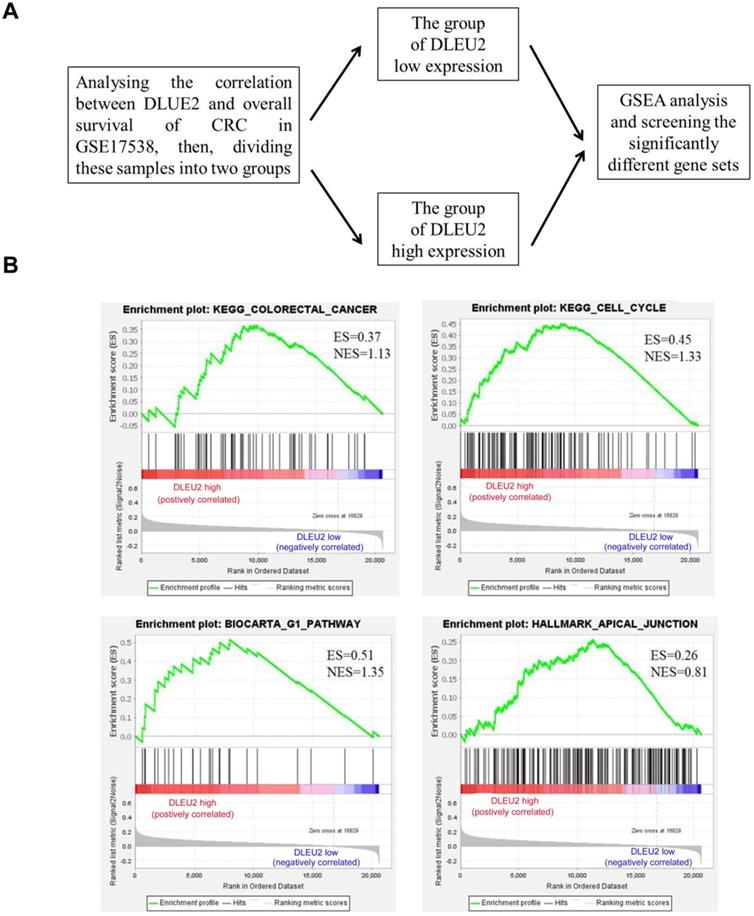 Knockdown of DLEU2 expression in CRC cells inhibits proliferative and metastatic phenotypes. (A) After transfection of HT29 cells with either si-NC or siR-DLEU2 (1#, 2#, 1+2#) for 48 h, the expression of DLEU2 was analyzed by qRT-PCR. CCK8 assays (B) and flow cytometry (C) were used to detect cell proliferative ability, and transwell matrigel assays (D) were used to detect cell metastatic ability. Data are shown as means ± SEM. *p < 0.05, **p < 0.01 compared with control. 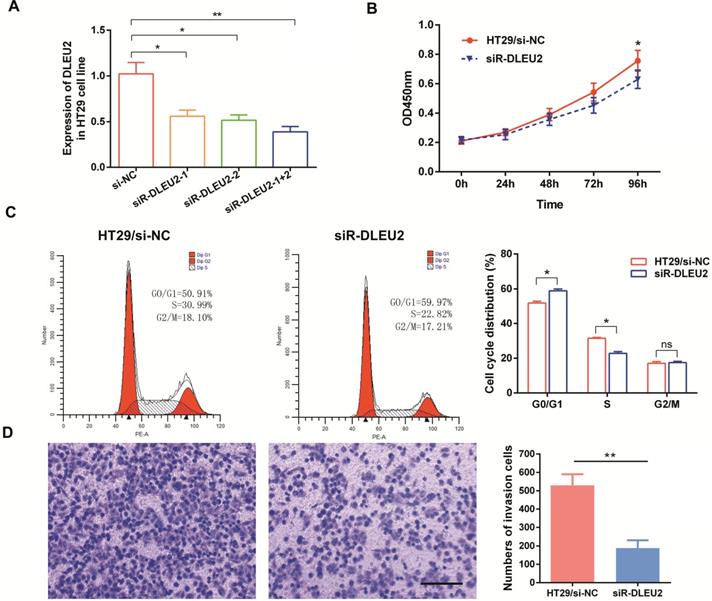 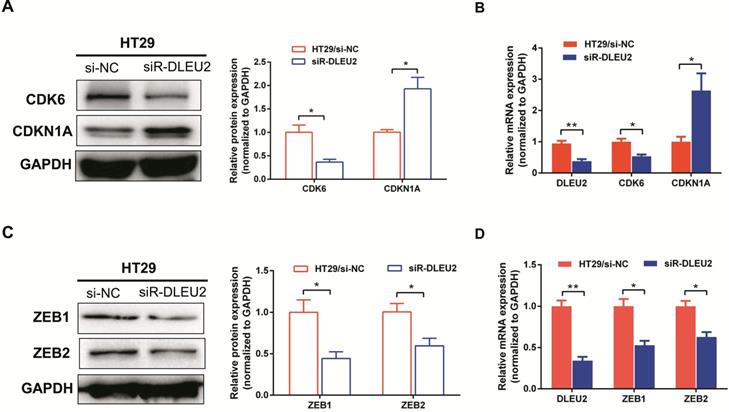 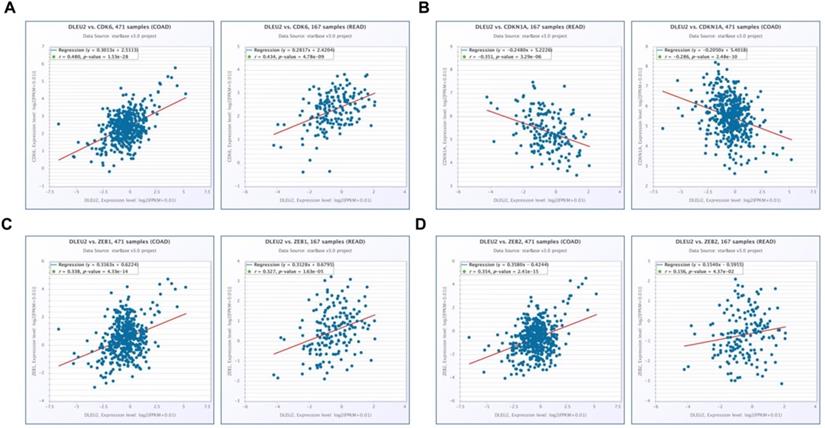 Recent studies suggest that DLEU2 plays a critical role in the development and progression of human cancers. Xu et al. [50] demonstrated that overexpressed DLEU2 can bind with miR-455 to promote the expression of SMAD2, thereby inducing the proliferation and invasion of pancreatic cancer (PC). Moreover, Guo et al. [51] reported that overexpression of DLEU2 can promote tumorigenesis in hepatocellular carcinoma (HCC) by interacting with the zeste 2 polycomb repressive complex 2 subunit (EZH2). However, the effects of DLEU2 on the tumorigenesis of other malignancies remain far from being understood. In this study, we first identified that the expression of DLEU2 in CRC was positively correlated with colorectal cancer, cell cycle, G1 pathway, and Apical junction signaling sets by GSEA. We demonstrated that knock-down of DLEU2 expression in CRC cells could suppress their proliferative and invasive capabilities by reducing the expression of CDK6, ZEB1, and ZEB2, as well as enhancing the expression of CDKN1A. Furthermore, we showed that the subcellular localization of DLEU2 in CRC cells was mainly cytoplasmic. The subcellular localization of lncRNAs is usually related to their biological functions [52]. lncRNAs, mainly localized in the cytoplasm, can 'sponge' miRNAs to form ceRNA so as to regulate the expression of target genes; whereas nuclear lncRNAs can interact with transcription factors or epigenetic modification-associated proteins to modulate gene expression. Therefore, we speculated that DLEU2 expressed in the cytoplasm of CRC cells may sponge miRNA to form ceRNA, thereby regulating the malignant biological behavior of CRC. In our next study, we will further explore regulatory mechanisms involving DLEU2 in CRC progression.

In summary, our study indicated upregulated expression of lncRNA DLEU2 in CRC, and high DLEU2 expression was positively correlated with poor survival time (RFS and OS) of CRC patients. We also demonstrated that knock-down of DLEU2 could inhibit the proliferative and invasive capabilities of CRC cells. However, there were certain limitations to this study: 1) we did not further investigate the underlying regulatory mechanisms involving DLEU2 in promoting the proliferative and invasive capabilities of CRC cells; 2) our study did not extend to animal experiments to explore the effects of DLEU2 in vivo. Taken together, our study may provide novel targets for candidate CRC therapies in the future.