Methods: We conducted a retrospective cohort study at a gastric cancer center in South China. Consecutive patients with stage I to III gastric adenocarcinoma who underwent curative resection at the center from January 2001 to February 2016 were identified. Patients were grouped into two cohorts: normal preoperative CEA (≤ 5 ng/ml), and elevated preoperative CEA (> 5 ng/ml). 3-year recurrence-free survival (RFS) and hazard function curves over time were estimated.

Conclusions: Patients with elevated preoperative CEA are at increased risk for recurrence, especially within the first 24 months after surgery.

This study was approved by the institutional review board of the First Affiliated Hospital of Sun Yat-sen University. Informed consent of study patients was waived by the review board. Inclusion criteria: Prospectively maintained databases were queried for all consecutive patients who underwent curative surgery for stage I to III gastric cancer patients from January 2001 to February 2016 at gastric cancer center of the First Affiliated Hospital of Sun Yat-sen University. The last follow-up date of this study was February 2018. Exclusion criteria: Preoperative chemotherapy or radiotherapy, lack of preoperative CEA data, non-curative palliative resection, gastric stump carcinoma, death of surgery complication, presence of other malignant tumors, non-available T stage or N stage, and non-adenocarcinoma (Figure 1). 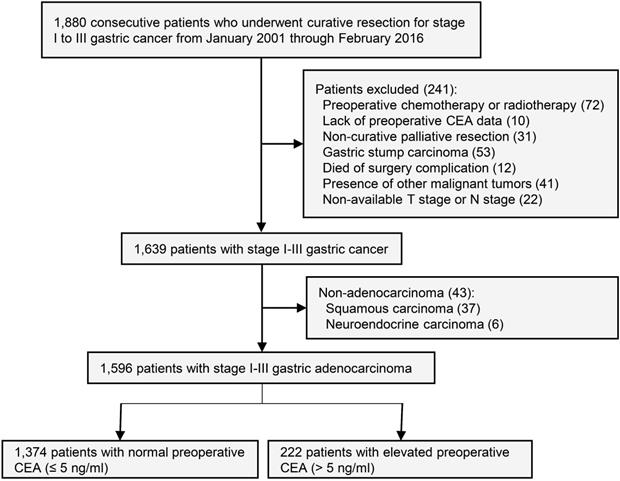 The preoperative stage was determined by contrast-enhanced computed tomography (CT) of the chest, abdomen and pelvis. The original pathologic TNM stages of patients in the databases were based on the 6th and 7th AJCC on Cancer staging system. The original pathological reports were reviewed by clinician, and then modified all the pathologic stages according to the 8th edition [8]. Adjuvant chemotherapy was administered to patients after histological evaluation of the surgical specimen according to the National Comprehensive Cancer Network (NCCN) guidelines. Postoperative follow-up was performed every 3-6 months for the first 3 years, then every 12 months from years 4 to 5. The routine patient follow-up appointments included a physical examination, laboratory tests, chest radiography, abdominal ultrasonography, CT or positron emission computed tomography (PETCT) and an annual endoscopic examination. CT was the most frequently used imaging method, including chest, abdomen and pelvis with intravenous contrast. Diagnosis of recurrence was based on new lesions on CT, PETCT or histological confirmation through biopsy.

Continuous variables were compared using the Mann-Whitney U test. Categorical variables were compared using the Chi-square test or Fisher's exact test. The recurrence-free survival (RFS) period was defined as the period from the date of surgery to the date of recurrence or last follow-up without recurrence. Patients who died without known tumor recurrence were censored at the last documented evaluation [11]. Differences in RFS were assessed by the Log-rank test. Hazard ratio (HR) and 95% confidence interval (CI) were estimated using Cox regression models and evaluated by the Wald test. Variables with P value less than 0.05 on univariate analyses were included in the multivariate analysis. The hazard function of recurrence was estimated using Kernel-based method [12, 13]. All statistical analyses were performed using R version 3.6.1 (R project) and IBM SPSS software (version 22, New York, USA). All tests were two-sided and P values of less than 0.05 were considered significant.

We used cBioPortal to identify genes correlated with CEACAM5 in mRNA expression level. Genes with an adjusted-P value less than 0.01 were considered significantly correlated with CEACAM5 and used for Gene Oncology (GO) enrichment and Kyoto Encyclopedia of Genes and Genomes (KEGG) pathways analyses. The clusterProfiler R package was used for analysis.

*There were 19 patients with stage 0 disease and they were grouped into stage I during analyses.

The smooth curve of the hazard function indicated that the risk of recurrence was higher in the elevated preoperative CEA group (Figure 2B). Nevertheless, both of the two groups peaked at the similar time and had high recurrence risk during the first 2 years after surgery.

We further investigated relationship between RFS and CEA in different stage patients (Figure 2C). The RFS of two cohorts had no significant difference in patients with stage I or II gastric cancer (Figure 2C). However, among patients with stage III gastric cancer, RFS was significantly lower in the elevated preoperative CEA cohort than that of normal preoperative CEA cohort (3-year RFS rate, 60.9% vs 74.8%, Log-rank P = 3.5E-04) (Figure 2C).

The recurrence patterns of the two cohorts were shown in Table 3. It was interesting that patients with elevated preoperative CEA was more likely to have liver metastasis rather than peritoneal metastasis.

Analysis of sites of recurrence in relation to CEA status

To validate whether the mRNA level of CEA was associated with recurrence of gastric cancer, we downloaded mRNA expression data of CEACAM5 and clinical information from cBioPortal. Results showed that high expression of CEACAM5 was significantly associated with poor RFS. The 3-year RFS rate for high-expression group was 48.3% (95% CI, 34.4%-68.0%) compared with 58.1% (95% CI, 50.5%-66.8%) for low-expression group (Figure S1A). The same trend was observed in the subgroup analyses of each stage. However, there was no significant statistical difference, which might be due to the small sample size in each stage (Figure S1 B-D).

In order to investigate the possible mechanisms associated with CEA and gastric cancer recurrence, cBioPortal was used to analyze genes correlated with CEACAM5 in mRNA expression level. Finally, 3,286 genes with an adjusted-P value less than 0.01 were considered significantly correlated with CEACAM5 and included for GO enrichment and KEGG signaling pathways analyses (Table S1). As a membrane protein, CEA was associated with cell-cell adhesion and junction (Figure S2) [14]. Surprisingly, as indicated by results from both GO and KEGG, CEA was significantly associated with chemokine signaling and immunology regulation, especially T cells and Th cells (Figure S2), which were already known to mediate cancer metastasis in previous studies [15-17].

Preoperative CEA was reported as an independent prognostic factor for RFS in a retrospective cohort of 621 patients by multivariate Cox model, adjusted by for age, stage, NUAK family kinase 2 (NUAK2), pyruvate dehydrogenase kinase 1 (PDK1), phospho-AMP-activated protein kinase (pAMPK) and mitogen activated kinase (MAPK) 3/1 [18]. Other studies also reported elevated preoperative CEA predicted shorter RFS under unadjusted condition [19-21], while some studies showed negative results without adjustment [22, 23], and the sample size of these studies vary from 70 to 479. The results from these studies are inconsistent, which might be due to the small sample size and unadjusted analyses. In this study, we demonstrated the prognostic value of preoperative CEA using multivariate analysis in a large cohort of 1,596 consecutive patients. We intend to provide some evidence for clinic practice. 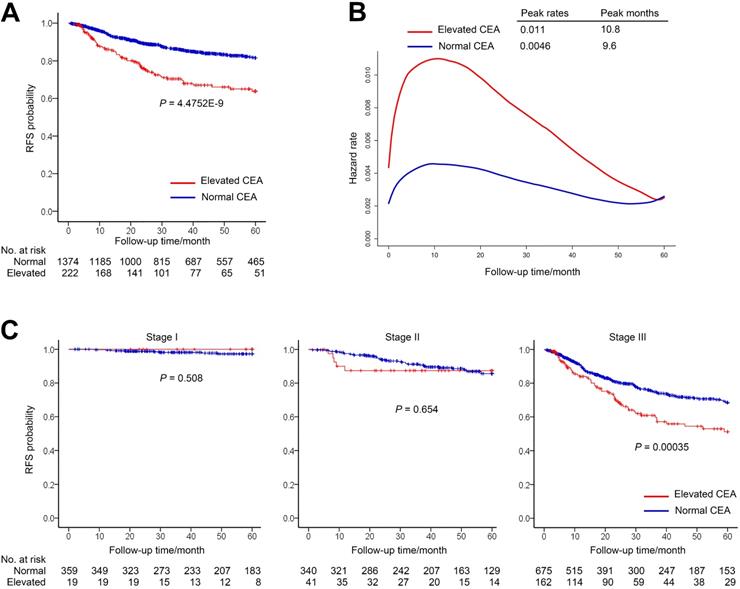 This study indicates that patients with elevated CEA were more likely to have liver metastasis than those with normal CEA as previously reported [25, 26]. Higher CEA is also associated with positive vessel carcinoma embolus [27]. It seems that tumors with elevated CEA are more invasive and prefer hematogenous metastasis. CEA is shown to inhibit transforming growth factor-β (TGF-β) signaling [28] and promotes liver metastasis of colon cancer in mice model [28, 29].

The major strengths of this study include large size of the cohort, patients with high-quality preoperative CT and standardized pathological reports; the uniform treatment patients received, with standard D2 or D2+ resection technique by specialized gastric surgeons and retrieved lymph node more than 16 in 83.2% of patients in this cohort; and standard adjuvant chemotherapy in all patients. Standard chemotherapy was handled by a special group in our center over years. This cohort has similar oncological outcomes to those seen in other reports from centers in Japan and Korea, where standard D2 resection technique is commonly performed. For example, the recurrence rate in this cohort is similar as previous report [30].

This study is with limitation inherent in observational retrospective cohorts. First, intervals and completeness of the follow-up were varied, although postoperative follow-up was performed according to national guideline [1]. Second, patients who died without known tumor recurrence were censored in this study. It is possible that some of them died because of recurrence without imaging test, which leads to underestimation of recurrence rate and potential bias. In addition, we did not control known factors that affect CEA, such as tobacco use, nonmalignant gastrointestinal disorders, lung disease, and hypothyroidism [31, 32]. Furthermore, this study is implemented in a single center and it would have some limitations to apply to other centers. Further validation studies are warranted to explore the value of preoperative CEA as an independent prognostic factor.

The elevated preoperative CEA independently predicts shorter RFS for patients with radically resected gastric cancer. Patients with elevated CEA tend to be under significant higher risk of recurrence in the first 2 years after surgery, which might provide evidence for risk-adjusted individualized surveillance strategy.