Background: The aim of this study was to evaluate the effect of neoadjuvant therapies (NAT) on patients with locally advanced gastric cancer (LAGC).

Results: In total, 2779 patients were included in this study (494 of NAT-Surgery group and 2285 of Surgery-ACT group). After PSM, the patients in NAT-Surgery group had a significantly longer overall survival (OS) than patients in Surgery-ACT group (P<0.001). Subgroup analysis revealed that grade 3 or 4 adverse events were more frequently observed in nCRT group during neoadjuvant treatment (52.0% in nCRT group vs. 34.0% in nCT group, P=0.010). Pathological complete response (pCR) being achieved in 17.0% after nCRT versus 4.0% after nCT (P<0.001). Patients of the nCRT group obtained better disease-free survival (DFS, P=0.024) and local-recurrence-free survival (LRFS, P=0.014) than patients in nCT group, while there was no significant difference in OS between the two groups.

As such, we conducted this retrospective study with the primary aim of comparing the long-term survival between patients of LAGC treated with and without neoadjuvant therapies (NAT). The secondary aim of this study was to assess the short-term and long-term outcomes regarding the two NAT concepts, neoadjuvant chemotherapy (nCT) and neoadjuvant chemoradiation (nCRT). The evaluation was performed by propensity score matching (PSM).

From October 2006 to December 2018, patients with clinical stage II-III gastric cancer treated with curative gastrectomy following neoadjuvant therapy (NAT-Surgery) or curative gastrectomy followed by adjuvant chemotherapy (Surgery-ACT) at China National Cancer Center were retrospectively reviewed. Inclusion criteria were as follows: presence of locally advanced (cT2-4a and/or N+) gastric adenocarcinoma according to the TNM stage system (American Joint Committee on Cancer, 8th edition); absence of distant metastases confirmed by clinical examination and imaging techniques; no other primary malignancy in the previous 5 years; an Eastern Cooperative Oncology Group performance status (PS) of 0-1. All study procedures were approved by the Institutional Review Board at the China National Cancer Center.

CT-scan and /or positron emission tomography (PET) scan was performed during the therapy to monitor the clinical response. The tumor response was classified according to the Response Evaluation Criteria in Solid Tumors (RECIST) [10] and the adverse events of chemotherapy were assessed according to the National Cancer Institute-Common Terminology Criteria for Adverse Events (NCI-CTCAE version 4.0).

For all patients included in the present study, the type of gastrectomy, totally or sub-totally, was determined by the size and location of the primary tumor. For patients underwent NAT, Surgery was scheduled 4-6 weeks after the completion of neoadjuvant treatment. D2 lymphadenectomy with spleen preservation was recommended for all patients. Postoperative complications were defined according to the Clavien-Dindo classification [11].

All resected specimens were reviewed by two pathologists to evaluate the pathological response to neoadjuvant treatment and the extent of the residual disease. The pathological tumor staging was determined according to the American Joint Committee on Cancer (AJCC) TNM Staging Classification for Carcinoma of the Stomach, 8th edition. A complete pathological response (pCR) was considered when no evidence of residual tumor was found in the surgical specimen (ypT0N0). The histological grade of tumor regression was classified based on the Mandard tumor regression grade (TRG) [12].

Postoperative adjuvant chemotherapy was recommended for all patients included in the present study. The regimens of postoperative adjuvant chemotherapy were consistent with the preoperative part of treatment. However, some patients declined postoperative chemotherapy due to various reasons. All the patients were followed up every 3 months for the first 3 years and every 6 months afterwards until 5 years post-surgery. The follow-up content included physical examination, complete blood count, hepatic function, serum tumor marker assessment, and CT-scan as well as annual gastrointestinal endoscopy.

A total of 2779 patients were identified and included in this study (Figure 1). Patients were categorized into two groups according to the treatment strategies, 494 of NAT-Surgery group and 2285 of Surgery-ACT group. Patients' characteristics and tumor baseline parameters were shown in Supplement Table 1. Tumor location, grade, clinical T stage, clinical N stage and clinical TNM stage (AJCC 8th edition) were significantly different between the two groups. We conducted two sets of propensity score matching (NAT-Surgery vs. Surgery-ACT and nCRT vs. nCT) to balance the baseline differences between groups for outcome comparison (Table 1).

Surgical outcomes and postoperative complications were listed in Table 3. The mean blood loss of nCRT group was 108 mL less than that of nCT group (170 vs. 278 mL, P<0.001). Moreover, the intraoperative blood transfusion rate of nCRT group was lower than that of nCT group (15.0 vs. 29.0%, P=0.017) and the mean postoperative hospital stay was also shorter in nCRT group (11 vs. 12 days, P=0.005). However, there was no difference in mean surgical time between these two groups. The total medical expenditure was comparable between the two groups (P=0.873).

Postoperative mortalities and morbidities were presented in Table 3. One patient in nCT group died within 30 days after surgical resection. Totally, the rate of postoperative complications was 9.0% and 16.0% for nCRT and nCT group (P=0.134), respectively. 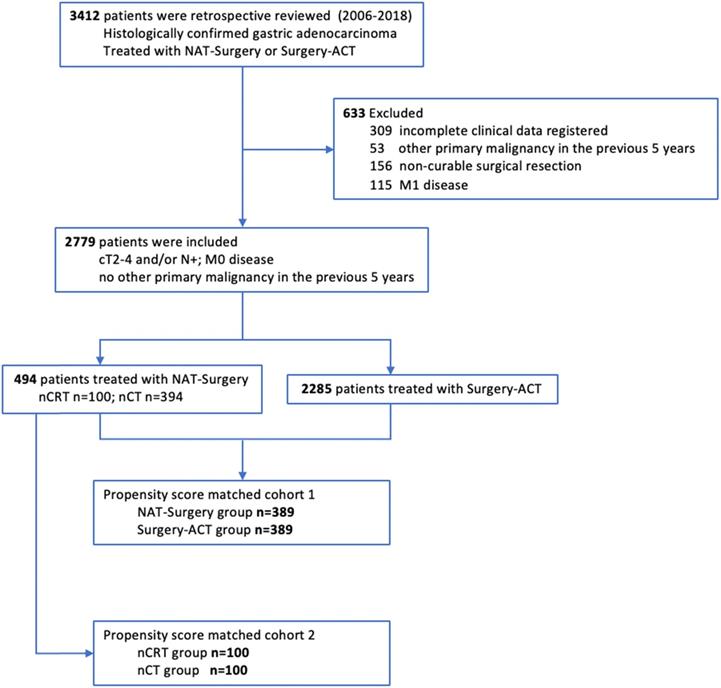 * Tumor stage according to the American Joint Committee on Cancer, 8th Edition. 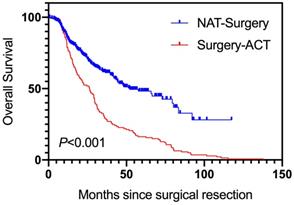 #Tumor stage according to the American Joint Committee on Cancer, 8th Edition.

Comparing with surgery alone, survival benefits of neoadjuvant or adjuvant treatments combined with radical surgery for LAGC were shown by several RCTs [3, 6-9, 13]. However, evidence from head to head trails for comparing these two therapeutic concepts was limited or unavailable. The present study had shown a survival advantage of NAT-Surgery compared to Surgery-ACT. The results from our study support the use of neoadjuvant treatments instead of undergoing radical surgery in the first place for LAGC patients. The possible explanation was that preoperative treatments could downstage the tumor, improve pathological responses, eradicate microscopic disease, reduced the risk of local and distant relapses, thus improving the OS [2].

Preoperative chemoradiation has now become the standard of care for patients with oesophageal and gastroesophageal junction tumors, thereby lending further support to its use in gastric cancer [14]. However, preoperative chemoradiotherapy in LAGC patients is still considered investigational. According to our results, the addition of radiotherapy to neoadjuvant chemotherapy significantly increased the pathological response rate (86.0% vs. 49.0%, P<0.001) and pCR rate (17.0% vs. 4.0%, P<0.001). These data consisted with the previous results from several studies suggested a superior regression grade rate after preoperative chemoradiation in comparison with that seen with chemotherapy alone [15-17]. Moreover, nCRT was also correlated with a lower ypT, ypN and ypTNM stage then nCT group in the current study. This suggests that chemoradiation therapy induced a higher response rate not only in the tumor wall but also in the lymph nodes, which is also consistent with conclusion of a previous study that preoperative chemoradiation increases the likelihood of achieving favorable histopathological features [16].

In the present study, we found that nCRT achieved significantly better DFS (P=0.014) and LRFS (P=0.0019) than nCT. These results support the current hypothesis that adding chemoradiation to standard perioperative chemotherapy will achieve even greater survival gains in LAGC patients. To our knowledge, the improvement for local disease control and distant recurrence after adding radiation to neoadjuvant therapy in LAGC patients has not been described previously. A possible reason for this difference could be that radiation eradicates the microscopic disease and malignant cells in the irradiated volume are radiosensitised and microscopic deposits outside are treated by adding chemotherapy [5].

The OS benefits of the use of nCRT in LAGC patients' remain controversial. Several studies have shown that the addition of radiation to neoadjuvant chemotherapy does not affect the OS [17-19]. On the other hand, several researches reported a survival advantage for preoperative chemotherapy compared with preoperative chemotherapy for adenocarcinoma of EGJ [20, 21]. Although, in the current study, there was no difference in OS between nCRT and nCT group, the analysis of survival revealed a type revealed a trend towards improved survival after the addition of radiotherapy among LAGC patients. This fact may be partly attributable to the relatively short follow-up period for the group of nCRT.

One of the major arguments with the use of nCRT is toxicity. Although, in the present study, the rate of grade 3 or 4 adverse events was significantly higher in nCRT group (52.0% vs. 34.0%, P=0.010), no death event during neoadjuvant treatment was recorded in both nCRT and nCT group. It was believed that nCRT could increase the difficulty of surgery and postoperative complications [21, 22]. Interestingly, the current study revealed a less mean blood loss, lower the intraoperative blood transfusion rate and shorter mean postoperative hospital stay in nCRT group. Moreover, the postoperative complications in both groups were comparable. Nevertheless, these data should be viewed with caution, given its retrospective exploratory nature and the limited number of patients analyzed.

Strengths and limitations should be considered when interpreting the study results. The present study was a retrospective cohort study using PSM method, which minimized the potential selection bias and confounding. Our study, for the first time, reported that nCRT had survival benefits of DFS and LRFS compared with nCT among LAGC patients. However, some patients were missing crucial clinical data that may have also affected survival outcomes such as comorbidities. Moreover, our follow-up was relatively short. Finally, this was a single-institutional analysis with significant treatment heterogeneity.

All procedures followed were in accordance with the ethical standards of the responsible committee on human experimentation (institutional and national) and with the Helsinki Declaration of 1964 and later versions. Informed consent to be included in the study, or the equivalent, was obtained from all patients.