A New Method for the Detection of Colorectal Cancer and the Precancerous Lesions: Occult Blood Testing Combination with Promoter Methylation in the Fecal Sample

This is an open access article distributed under the terms of the Creative Commons Attribution License (https://creativecommons.org/licenses/by/4.0/). See http://ivyspring.com/terms for full terms and conditions.
Citation:
Wang DY, He KX, Huang Y, Lou QQ, He T, Xu X. A New Method for the Detection of Colorectal Cancer and the Precancerous Lesions: Occult Blood Testing Combination with Promoter Methylation in the Fecal Sample. J Cancer 2021; 12(2):335-342. doi:10.7150/jca.50525. Available from https://www.jcancer.org/v12p0335.htm

Background: Noninvasive stool-based DNA methylation testing emerges as a new approach for detecting colorectal cancer (CRC). However, its feasibility for early detection of CRC and precancerous lesions in the Chinese population remains inconclusive.

Methods: In this study, we establish a possibilities screening method (sDNA-FOBT) for detecting CRC and precancerous lesions (hyperplastic polyps [HP] and adenomas [AD]) and evaluate its detection performance in the Chinese population. This method combined a molecular assay of DNA methylation markers (BMP3, NDRG4, and SDC2) with the human hemoglobin test (FOBT) in stool samples.

Conclusion: Our results demonstrate that sDNA-FOBT is a promising method for screening CRC and precancerous lesions in the Chinese population. Further studies are required to validate the results in a larger sample capacity.

Colorectal cancer (CRC) is the third most common malignancy and the second leading cause of cancer-related death worldwide [1]. With the improvement of living standards and the change of dietary habits, the incidence of CRC has seen a steady increase in recent years in China. CRC screening effectively reduces mortality by removing polyps and other precancerous lesions or by early detection of CRC [2-4].

Recently, non-invasive stool-based DNA methylation testing has emerged as a new molecular approach for detecting CRC and precancerous lesions [18-22]. A large number of cancer-related methylated genes detected in patients' stool samples have been suggested to be of diagnostic and prognostic values for CRC [23-32]. However, due to the difference in sample capacity, study methods (MSP assay or QuARTS assay), and populations, most of the results from current studies are heterogeneous. Moreover, the sensitivities of most methylated DNA markers for adenoma detection were low [15, 33, 34]. Thus, developing a novel effective screening method for the detection of CRC and precancerous lesions for the Chinese population is highly necessary and urgent.

The DNA methylation biomarkers BMP3 (bone morphogenetic protein 3), NDRG4 (N-myc downstream-regulated gene 4) and SDC2 (syndecan-2) has been extensively studied and are served as an alternative method in screening colorectal cancers and neoplasms [5, 16, 31, 35-44]. In this study, we established a possibilities screening method (sDNA-FOBT) for detecting CRC and precancerous lesions (hyperplastic polyps [HP] and adenomas [AD]) and evaluated its detection performance in the Chinese population. The sDNA-FOBT combined the molecular assay of DNA methylation markers (BMP3, NDRG4, and SDC2) with the human hemoglobin test (FOBT) in stool samples.

One hundred and forty-four participants who underwent colonoscopy at our hospital from January 2018 to June 2019 were enrolled in the study, and informed consent was signed by all participants. Patients were excluded if they had (1) known inflammatory bowel disease, Lynch syndrome, familial adenomatous polyposis, Peutz-Jeghers syndrome, or other malignant diseases; or (2) the previous history of CRC, any chemotherapy or radiotherapy. Stool samples (0.5 g) were collected at least 1 day before bowel preparation for colonoscopy. Biopsies were performed for histological examination during colonoscopy. According to the results of colonoscopy and pathology outcomes, the participants were assigned into four groups, namely, Control group (n=50), HP (size < 10 mm) group (n=39), AD group (n=7), and CRC group (n=48). The clinical characteristics, including age, sex, tumor location, size, stage, differentiation degree, histology subtype, and pathological pattern were collected. The study conformed to the ethical guidelines of the 1975 Declaration of Helsinki and was approved by the Institutional Review Board of our hospital.

The Stool DNA was chemically modified using an EZ DNA Methylation-GoldTM kit (ZYMO Research, USA) according to the manufacturer's instructions. Bisulfite-converted DNA was either used immediately for methylation analysis or stored at -20 °C until further use.

Methylation assays were performed using KAPA PROBE FORCE qPCR Kits (KAPA Biosystems, USA) in LightCycler® 480 Instrument II (Roche, Switzerland). A total of 20 μl reaction mixture consisting of 8.8 μl of bisulfite-converted stool DNA, 0.8 μl of methylation-specific antisense primers and 0.4 μl specific probe primers, and 10 μl of PROBE FORCE qPCR master (Roche, Switzerland) was prepared. Methylation-specific primers and probes were designed to bind to bisulfite-converted methylated DNA of the BMP3, NDRG4 (NDRG4_12b, NDRG4_12m, NDRG4_34b), and SDC2 genes. Actin served as a reference gene to confirm PCR adequacy and quality of bisulfite-converted stool DNA. Thermal cycling conditions were as follows: 98 °C for 3 min; 15 cycles at 95 °C for 10 s and 65 °C for 30 s; 35 cycles at 95 °C for 10 s and 58 °C for 30 s. The sequences of primers and probes were shown in Table 1.

FOBT was performed according to the manufacturer's instructions on the same stool sample used for the DNA test [30]. Briefly, one drop of the peroxide catalyst was added into the reverse side of each window of the test cards, and a blue color reaction within 60 s was considered as a positive result.

The methylation analysis result was defined as the Δ threshold cycle (ΔCt) value (ΔCt = number of copies of methylated DNA-the number of copies of Actin). A value of 1 was assigned if the FOBT result was positive and 0 if negative. Individual results of the methylation assays and FOBT were combined to produce a composite score by the logistic regression algorithm and then compared to the cutoff value to determine a positive or negative result. The diagnostic performance was evaluated in terms of the sensitivity, specificity, and area under the receiver operator characteristic (ROC) curve (AUC). Chi-square test and linear regression analysis were performed to evaluate the correlation of diagnosis results with clinical characteristics. Statistical calculations were performed using SPSS (version 19.0). P-value < 0.05 was considered as statistically significant.

Correlation between the Detection Sensitivity and Clinical Characteristics

Clinicopathological characteristics of the participants

a P‐value of the sDNA-FOBT compared with FOBT by paired Chi-square test. 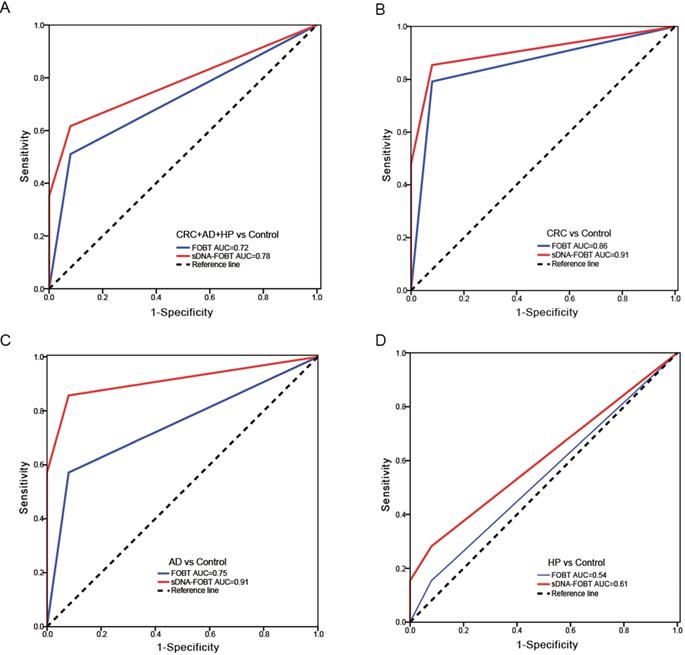 In this study, three methylation markers (BMP3, NDRG4, and SDC2) were selected. BMP3 is a cytokine of the transforming growth factor-beta (TGF-β), and aberrant methylation of BMP3 has been reported to participate in the tumor development of CRC [42]. NDRG4, a member of the NDRG family, is recently determined as a tumor suppressor gene in CRC through attenuating the activity of PI3K-AKT [43, 44]. SDC2, alternatively known as fibroglycan, encodes a transmembrane (type I) heparan sulfate proteoglycan and the SDC2 methylation can be specifically detected in stool and blood samples derived from CRC patients [36]. Studies reported that the stool test of methylated SDC2 detected 81.1% of colorectal cancer and 58.2% of adenomas at a specificity of 93.3% based on the Chinese population [16], while for the South Korean population, results showed that SDC2 methylation in stool detected 90.2%, 66.7%, and 24.4% of colorectal cancer, advanced and non-advanced adenomas, respectively [45]. Similarly, multi-target stool DNA tests involving methylation detection of NDRG4 in combination with BMP3 or SDC2 in the diagnosis of colorectal cancer have the sensitivities ranging from 85%-98% and specificity ranging from 86.6%-90% [32, 46-50]. In our study, the diagnostic performance of sDNA-FOBT for CRC was more accurate than FOBT (sensitivity: 85.42% vs. 79.17%, AUC: 0.91 vs. 0.75), and not affected by the tumor location or size.

Although FOBT is widely used for CRC screening, it is limited by diet habits, low sensitivity, and the requirement of multiple samplings [51]. DNA methylation testing for CRC screening has the advantages of continuous marker release and production from the tumor and is less affected by dietary habits or medication restrictions [49, 52]. Therefore, the compliance and performance of sDNA methylation testing were superior to FOBT [53]. The immune fecal occult blood test (iFOBT) has been used to CRC screening in Taiwan for no family or personal history of people above the age of 50-69 since 2004, with 84% specificity and 55% specificity [54]. A combined MS-9 DNA blood test and iFOBT showed a high predicted rate to detect CRC in Taiwanese people (AUC=0.77) [54]. Lenhard et al. designed a strategy for CRC detection by combined FOBT and HIC1 methylation, and such a method has 65% sensitivity for CRC and the detection performance was significantly increased compared with using FOBT or HICI methylation assay alone [30]. Compared to these methods, our method combined FOBT with three methylation markers (BMP3, NDRG4, and SDC2) and showed a higher sensitivity and diagnostic performance for CRC (sensitivity: 85.42%, AUC: 0.91). Symonds et al. confirmed that combining FIT with a blood test based on detection of methylated BCAT1/IKZF1 DNA, sensitivity for CRC was 89% at 74% specificity [55]. Our method showed comparable sensitivity but better specificity for CRC (sensitivity was 85.42% at 92% specificity). Moreover, the sensitivity of sDNA-FOBT was not affected by age, proving an equivalent detection rate in both younger patients and elder patients. Notably, the advantage of sDNA-FOBT in our study was particularly outstanding in detecting young patients (the sensitivity increased from 37.50% to 62.50%), possibly due to the less bleeding in the young CRC patients that is less likely to be detected by FOBT. However, combining FOBT with DNA methylation testing, such a miss of detection could be rescued by DNA methylation testing, with an improved detection rate by the algorithm. The new Colorectal Cancer Screening Guidelines [56] issued by the American Cancer Society in 2018 updated the age at initiation CRC screening from 50 years to 45 years. It was confirmed that the incidence rate of CRC, which increased in younger cohorts, doubled between 1991 and 2014 in individuals aged 20 to 49 years old [56]. Therefore, it is highly necessary to improve early-stage CRC screening for the young population.

In addition to the accurate detection for advanced-stage cancer, an ideal screening method should be able to effectively identify early-stage cancer and precursor lesions and thus reduce the subsequent risk of invasive disease. Previous studies have reported the diagnostic accuracy of the stool DNA methylation test for detecting precursor lesions, such as advanced adenoma and sessile serrated polyps, were lower than CRC [47, 53, 57, 58]. The sensitivity of the stool DNA test for the detection of advanced precancerous lesions was around 42%-57% [32], approximately half of the detection sensitivity for CRC. NDRG4 was considered as a candidate methylation marker for adenomas screening, the sensitivity and specificity for adenoma detection were higher than 70% [58]. In addition, it was reported that the sensitivity of the combined study using three methylation markers of ITGA4, SFRP2 and p16 in stool samples for colorectal adenoma detection was 72.0% at 96.8% specificity [23]. Our results indicated that the diagnostic performance of sDNA-FOBT for adenomas was comparable to that for CRC, with the sensitivity exceeded 85%, specificity exceeded 90% and diagnostic performance AUC>0.9. However, the performance was low for hyperplastic polyps screening (28.21% sensitivity) in the current study. Redwood et al. reported that a multitarget stool DNA test detected 38% of sessile serrated adenomas/polyps (lesions ≤ 1 cm) based on the Alaska natives [59]. A fecal DNA analysis revealed that the detection rates of methylated CDKN2A, MGMT, and MLH1 were 31%, 48%, and 0% for adenomas, and 16%, 27%, and 10% for non-detectable polyps, respectively [33]. Therefore, we need to develop a more effective screening method to diagnose low-degree lesions from normal.

In conclusion, sDNA-FOBT is a promising method for screening CRC and precancerous lesions in the Chinese population. However, as our sample size was not large enough for a correlation analysis of clinical variables, the findings in the current study should be further validated in a larger population.

28. Amiot A, Mansour H, Baumgaertner I. et al. The detection of the methylated Wif-1 gene is more accurate than a fecal occult blood test for colorectal cancer screening. PLoS One. 2014;9:e99233