Background and Aim: Glioblastoma multiforme (GBM) is a highly aggressive brain malignancy that lacks reliable treatments. Resveratrol possesses anti-cancer effects, but its activity against glioblastoma cells is variable for unknown reasons. One mechanism through which anti-cancer drugs exert their effects is oxidative damage caused by increased reactive oxygen species (ROS) production. Thus, the present study examined the relationship between oxidative stress and sensitivity to resveratrol in glioblastoma cells.

Results: Resveratrol-treated U251 cells, but not resveratrol-treated LN428 cells, exhibited remarkable growth arrest and extensive apoptosis accompanied by elevated intracellular ROS levels and attenuated SOD2 and catalase expression. Mitochondrial impairment and more distinct increases in the expression of activated caspase-9 and caspase-3 were detected in U251 cells following resveratrol treatment. The levels of resveratrol metabolic enzymes (SULT1A1 and SULT1C2) were lower in U251 cells than in LN428 cells.

Conclusions: Resveratrol increased ROS generation and induced oxidation-related cellular lesions in U251 cells by activating an ROS-related mitochondrial signal pathway. The levels of SULTs and ROS may indicate the therapeutic outcomes of resveratrol treatment in GBM.

Glioblastoma multiforme (GBM) is the most common brain malignancy in adults [1]. Despite recent advances in aggressive surgery combined with adjuvant therapies [2], the prognosis of advanced GBM remains extremely poor because most patients with GBM die within 15 months after diagnosis and fewer than 3%-5% of patients survive for more than 5 years [3]. Therefore, more effective, less toxic anti-cancer agents that can penetrate the blood-brain barrier are urgently needed.

Resveratrol (3,5,4′-trihydroxystilbene) has a wide range of health benefits including chemopreventive, anti-inflammatory, anti-oxidant, and anti-cancer activities [4]. The chemopreventive and anti-cancer effects of this agent have been demonstrated in several cancer types [5]. More importantly, resveratrol can penetrate the blood-brain barrier via simple diffusion, indicating its therapeutic potential in the treatment of brain malignancies [6, 7]. Our previous data revealed that human GBM cells responded differently to resveratrol [8]. For instance, U251 cells were sensitive to 100 μM resveratrol in terms of growth arrest and apoptotic cell death, whereas LN428 cells did not respond to the same treatment [8]. Thus, it is important to investigate the underlying factors that explain the differential resveratrol responsiveness of glioblastoma cells for personalized therapy.

Reactive oxygen species (ROS), a group of highly reactive ions and molecules, are generated in the mitochondria as oxygen metabolism by-products [9] and recognized as powerful signaling molecules involved in the cell crisis caused by anti-cancer drugs [10]. In cancer cells, higher ROS levels result in oxidative damage in mitochondria and mitochondrial alterations that trigger the apoptosis cascade by releasing apoptotic signals. Redox regulation plays critical roles in maintaining the survival of malignant cells by reducing ROS levels [11]. Therefore, ROS levels and the efficiency of their dynamic regulation may determine the response of cancer cells to chemotherapy [12-14]. Resveratrol has been reported to have anti-oxidant activity in normal cells, but less data are available for cancer cells [15]. Recently, we found abundant spheroid mitochondria, an indicator of oxidative mitochondrial damage, in resveratrol-treated ovarian cancer cells [16]. Our previous studies revealed that the levels of resveratrol-related metabolic enzymes such as sulfotransferases (SULTs) are lower in cancer cells than in their normal counterparts. Moreover, SULT levels are negatively correlated with the sensitivity of glioblastoma cells to resveratrol [17]. These phenomena may explain why resveratrol exerts beneficial effects on normal cells but damaging effects on malignant cells [18]. It is therefore possible that resveratrol increases rather than reduces oxidative stress in cancer cells, presumably because of the poorly operated intracellular resveratrol metabolic machinery in cancer cells. This study examined this speculation using resveratrol-sensitive U251 and resveratrol-resistant LN428 cells.

Hematoxylin-eosin (H/E) morphological staining was performed on the cell-bearing coverslips with different treatments. The effects of resveratrol on cell proliferation were determined at 24 hour and 48 hour time points by 3-[4,5-Dimethylthiazol-2-yl]-2,5-diphenyl-tetrazolium bromide (MTT) assay and shown in OD values. In paralell, TUNEL assay was employed to detect apoptotic cells according to producer's instructions (Promega Corporation, USA).

2'-7'-dichlorodihydrofluorescein-diacetate (DCFH-DA) penetrates cells and becomes hydrolyzed to non-fluorescent dichlorodihydrofluorescein (DCFH). DCFH reacts with ROS to form the highly fluorescent dichlorofluorescein (DCF) which can be measured by a flow cytometry. Briefly, U251 and LN428 cells were treated with 100 μM resveratrol and collected at 0 h, 6 h, 12 h, 24 h and 48 h time points. The cells (2×105) were incubated with 10 μM DCFH-DA (Beyotime Biotech, Jiangsu, China) for 20 minutes at 37 °C in dark room and washed twice with DMEM. ROS levels were analyzed using a flow cytometer (FACSCalibur, BD Biosciences, San Diego, CA, USA). The cell-bearing coverslips collected at the same time were stained in situ with DCFH-DA and observed and photographed under a fluorescence microscope (Leica, DMI4000B, Germany).

Immunocytochemical staining (ICC) was performed by the method described elsewhere [16]. The rabbit anti-human SOD2, Catalase, rabbit SULT1A1 and SULT1C2 (Proteintech, Chicago, IL, USA) were used in the dilution rates of 1:500, 1:500, 1:200, 1:150, respectively. Color reaction was developed using 3, 3'-diaminobenzidinete-trahydrochloride (DAB). According to the labeling intensity, the staining results were evaluated by two independent researchers and scored as negative (-) if no immunolabeling was observed in target cells, weakly positive (+), moderately positive (++), and strongly positive (+++).

Total cellular proteins were prepared from the cells by the method described previously [17]. 30 μg sample proteins were separated with 12% SDS/PAGE, and transferred to a polyvinylidene difluoride membrance (Amersham, Buckinghamshire, UK). The membrance was blocked with 5% skimmed milk in NaCl/Tris-T (10 mM Tris/HCl, pH 8.0, 150 mM NaCl, and 0.5% Tween-20) at 4 °C overnight, incubated for 2 hours with the primary antibody and then with horseradish peroxidase-conjugated anti-rat IgG (Zymed Laboratories, San Francisco, CA, USA) for one hour. Immunolabeling was detected with an enhanced chemiluminescence system (Roche Inc., Mannheim, Germany), and visualized with the UVP Bio-spectrum Imaging System (UVP, Upland, CA, USA). β-actin was used as the internal quantitative control in densitometry analyses.

The experiments were repeated at least for three times and the the normality of the data obtained were analyzed using SPSS software (version 17.0; SPSS, Chicago, IL). The differences in continuous variables were assessed by Student's t-test or one-way ANOVA. Values are presented as the mean ± standard deviation of triplicate experiments. When required, P-values are stated in the figure legends.

Different resveratrol sensitivities of U251 and LN428 cells

Extensive apoptosis of resveratrol-treated U251 cells

Mitochondrial alteration in resveratrol-treated U251 cells

Transmission electron microscopy illustrated that in comparison with the intact mitochondria of control cells, double membrane-defined mitochondrial spheroids were commonly observed in resveratrol-treated U251 cells (white arrow) but not in LN428 cells treated under the same experimental condition (Figure 2A). 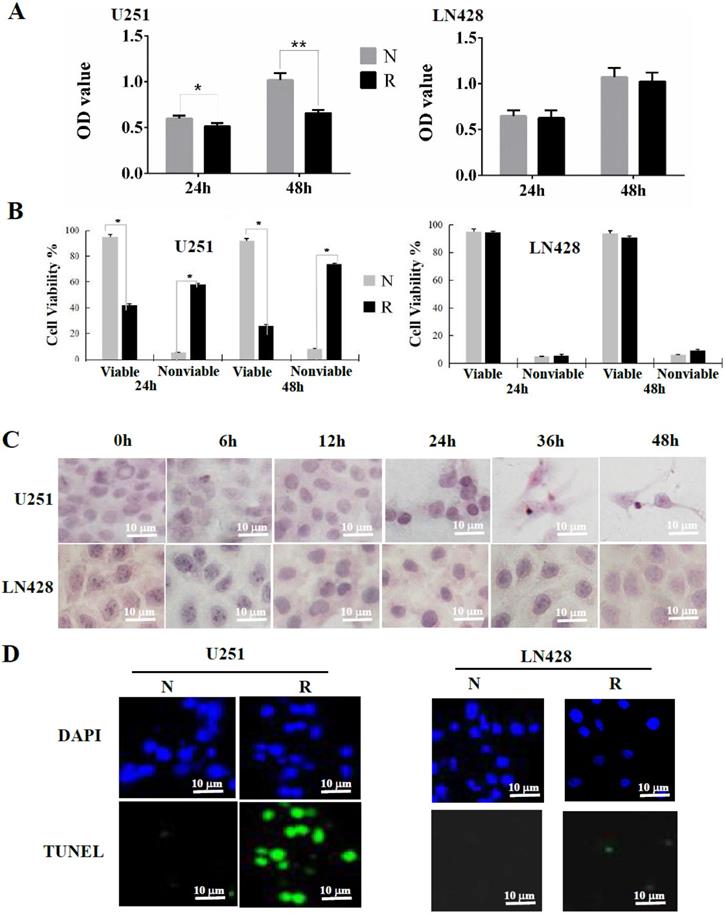 Superoxide dismutase-2 (SOD2) and catalase (CAT) downregulation in U251 cells

Mitochondrial spheroid formation and reactive oxygen species (ROS) accumulation in resveratrol-sensitive U251 cells. (A) Transmission electron microscopic examination (×40,000) of the double membrane-defined mitochondrial spheroids (white arrow) in resveratrol-treated U251 cells. N, without resveratrol treatment; R, treated with 100 μM resveratrol for 48 h. (B) The cells were treated with 100 µM resveratrol for 0, 6, 12, 24, 36, or 48 h and stained with 2′-7′-dichlorodihydrofluorescein diacetate. Variation of the intracellular fluorescence intensity in U251 and LN428 cells was determined using flow cytometry. (C) Fluorescence intensity analysis of U251 and LN428 cells. (D) ROS levels in U251 and LN428 cells were measured using fluorescence microscopy. All data are presented as the mean ± SD of three independent experiments. Compared with the 0 h sample, *, P < 0.05; **, P < 0.01. 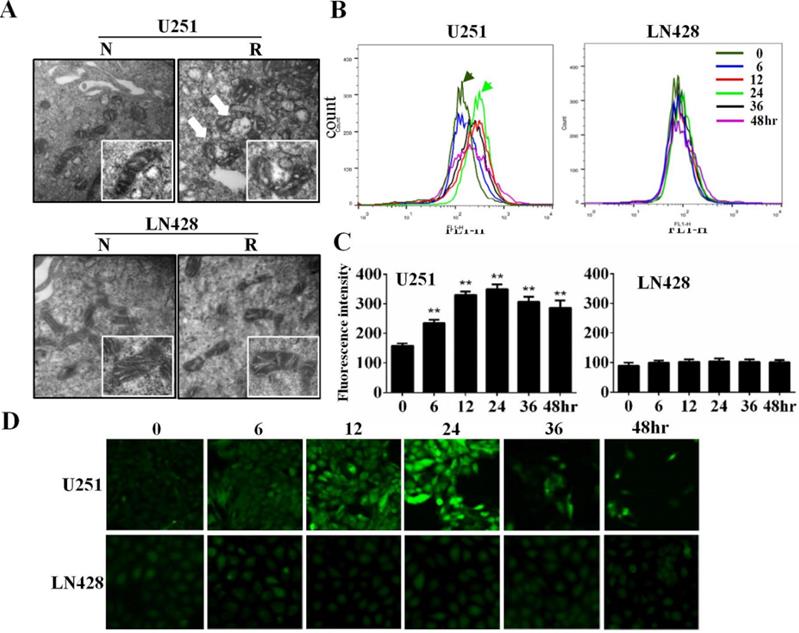 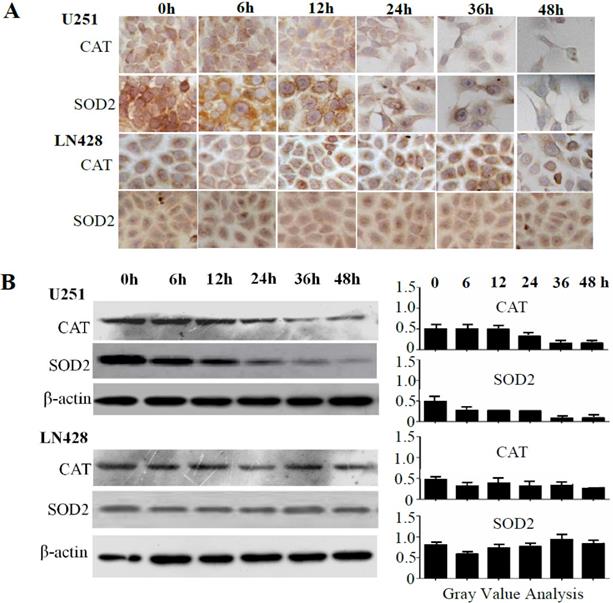 Intracellular ROS-induced oxidative damage is one of the biological effects of anti-cancer drugs [19-21], as reflected by mitochondrial swelling [22] and spheroid mitochondrion formation [23]. Resveratrol has multifaceted biological activities including anti-oxidant and anti-cancer effects [24]. Our previous studies revealed that resveratrol has little influence on the growth of normal cells [25], suggesting that the molecular elements related with the effects of resveratrol may be altered in cancer cells, resulting in different biological consequences including oxidative stress. To elucidate this speculation, it is necessary to select resveratrol-sensitive and resveratrol-insensitive cancer cells and measure ROS levels and oxidation-related events after resveratrol treatment.

The cellular redox balance is typically maintained by a powerful anti-oxidant system in which SOD2 and CAT play active roles [29, 30]. Because of the increased ROS levels in resveratrol-sensitive U251 cells but not in resveratrol-resistant LN428 cells, SOD2 and CAT levels in the two cell lines were analyzed before and after resveratrol treatment. SOD2 and CAT levels were similar in the cell lines under normal culture conditions. After drug treatment, SOD2 and CAT expression was downregulated in U251 cells in a time-dependent manner. This phenomenon thus indicates the inefficiency of the anti-oxidant defense system in resveratrol-treated U251 cells, which may explain the resulting ROS accumulation and oxidative damage [31]. Anti-oxidation is one of the beneficial effects of resveratrol on normal cells [32], but this effect is less commonly described in cancer cells [15]. Our results clearly demonstrated that resveratrol significantly increases ROS levels and downregulates SOD2 and CAT production. Because these events increased oxidative stress and only occurred in resveratrol-sensitive GBM cells, it is reasonable to consider that the redox state of GBM cells is one of the elements explaining their resveratrol sensitivity. It would be worthwhile to investigate other oxidative stress factors such as GPX1 and SOD1 to further support this notion.

Resveratrol suppresses cancer cell growth without affecting normal cells because the availability of resveratrol in normal cells is well controlled by efficient biotransformation machinery operated by metabolic enzymes such as SULTs [8, 17, 24]. Alternatively, SULT levels are negatively correlated with the anti-cancer efficacy of resveratrol [34], including oxidative stress as described in the current study. For this reason, SULT1A2 and SULT1C2 expression patterns were assessed in control and resveratrol-treated U251 and LN428 cells. The results revealed that basal SULT1A1 and SULT1C2 expression was lower in U251 cells than in LN428 cells, and this situation was unchanged after resveratrol treatment. These results suggest that the decreased metabolic efficiency in U251 cells may increase the intracellular bioavailability of resveratrol and therefore result in oxidative damage instead of anti-oxidant effects. SOD2 and CAT downregulation in resveratrol-treated U251 GBM cells can aggravate oxidative stress, although the underlying mechanism leading to their reduction remains to be investigated.

Taken together, this study demonstrated distinctive growth arrest and apoptosis in resveratrol-treated U251 cells accompanied by remarkably increased ROS levels, caspase-9 and caspase-3 activation, spheroid mitochondrion formation, and reduced SOD2 and CAT production. By contrast, those events did not occur in resveratrol-treated LN428 cells. These findings thus indicate that oxidative stress is one of the cancer-suppressive effects of resveratrol. In this context, ROS levels represent a new parameter for predicting the efficacy of resveratrol against GBMs.

This work was supported by the grants from National Natural Science Foundation of China (Nos. 81672945 and 81450016), Research Fund for PhD supervisors from National Education Department of China (20122105110005), and a special grant for creative research from South China University of Technology. We thank Joe Barber Jr., PhD (www.liwenbianji.cn/ac) for editing the English text of a draft of this manuscript.