Background: It has been reported that local anesthetics are toxic to various types of cells. Furthermore, several local anesthetics have been confirmed to exert demethylation effects and regulate the proliferation of human cancer cells. Our previous findings suggest that lidocaine may exert potential antitumor activity and enhance the sensitivity of cisplatin to hepatocellular carcinoma in vitro and in vivo. A recent study proved that lidocaine sensitizes breast cancer cells to cisplatin via upregulation of RASSF1A, a promotor of tumor suppressive gene (TSG) demethylation. We sought to determine whether amide-type local anesthetics (lidocaine, ropivacaine and bupivacaine) exert growth-inhibitory effects on human hepatoma cells and to determine whether amide-type local anesthetics sensitize human hepatoma cells to cisplatin-mediated cytotoxicity via upregulation of RASSF1A expression.

Methods: Human hepatoma cell lines HepG2 and BEL-7402 were incubated with lidocaine, ropivacaine and bupivacaine. The viability of local anesthetic-treated cells with or without cisplatin was investigated. Further, we evaluated RASSF1A expression after treatment of HepG2 and BEL-7402 cells with three local anesthetics and determined the influence of RASSF1A expression on the toxicity of cisplatin to these cells.

Conclusions: These data indicated that amide-type local anesthetics (lidocaine, ropivacaine and bupivacaine) have growth-inhibitory and demethylation effects in human hepatoma cells. We also found that these amide local anesthetics may enhance the cytotoxicity of cisplatin in human hepatocellular carcinoma cells possibly via upregulation of RASSF1A expression and demethylation.

Recently, an increasing number of studies have shown the potential mechanisms of local anesthetic-induced tumor suppression. Several pathways have been described in the literature. On the one hand, local anesthetics, at high doses, are cytotoxic in vitro and in vivo [1-4], and on the other hand, they may induce sensitization of tumor cells to chemotherapeutics [1, 5] and heat [6].

Another potential mechanism whereby local anesthetics may influence tumor growth is by interaction with the tumor epigenome [3, 7, 8]. Studies have indicated that the silencing of tumor suppressor genes (TSGs) through methylation of their promoters is one of the causes of tumor development [9]. As one of the natural covalent modifications of chromatin, defined as epigenomic modifications [10], the silencing of TSGs by DNA methylation induces mechanisms responsible for promoting tumor development, such as metastasis, avoidance of apoptosis, and uncontrolled cell growth or maintaining angiogenesis. In malignant tumors, increased methylation often leads to downregulation of tumor suppressor genes, which is conducive to tumor progression [11].

As an example, methylation of promoter regions of TSGs, such as VHL, CDKN2A and BRCA1, renders them inactive in cancer cells [9, 12]. Moreover, DNA methylation may facilitate the mutation of TSGs. The tumor suppressive p53 gene is mutated in more than 50% of solid tumors, and 25% of the mutations result from methylated cytosine to thymine changes in the CpG dinucleotides of this gene [13]. Quantitative analysis of DNA methylation profiles for more cancer-related genes also indicates a strong association of TSG hypermethylation with lung cancers [14] and colorectal cancers [15]. Specific promoter hypermethylation of these genes is dependent on tumor type [16-18]. Unlike genetic alterations, epigenetic gene silencing through DNA hypermethylation is potentially reversible, and this probably can provide new opportunities for the clinical treatment of malignant tumors.

The aim of this study was therefore to test two hypotheses: (i) the amide-type local anesthetics lidocaine, ropivacaine and bupivacaine may exert potential antitumor activity in hepatocellular carcinoma and (ii) the three amide-type local anesthetics may sensitize hepatocellular carcinoma cells to cisplatin-mediated cytotoxicity via upregulation of RASSF1A expression.

Cell Culture and Treatment with Reagents

Cell viability was determined by the Cell Counting Kit-8 assay kit (Dojindo Molecular Technologies, Japan) according to the manufacturer's instructions. HepG2 and BEL-7402 cells were seeded at 3,000 cells per well in 96-well plates and were incubated at 37 °C for 24 h to approximately 85% confluence, and then cells were treated with amide-type local anesthetics (one of lidocaine, ropivacaine and bupivacaine) or cisplatin (alone or in combination) at the indicated concentrations. Cell Counting Kit-8 was added to each well, and the plate was incubated for 3 h at 37 °C. The absorbance value (OD) was read at 450 nm using a spectrophotometer, and the data were analyzed using Softmax Pro software (Molecular Devices LLC, USA). Each experiment was performed in triplicate.

The DNA methylation was analyzed using MethyLight method [23], to quantify the methylation level of RASSF1A, which has been reported to be hypermethylated in breast cancer [24]. The methylation status of individual CpG sites in this gene within the promoter region was determined by the sodium bisulfite-sequencing assay as described previously [25]. Each experiment was performed in triplicate.

Data are shown as the mean ± SEM. To determine differences between three or more means, one-way ANOVA with Bonferroni post hoc tests was performed. A P value of < 0.05 was considered statistically significant.

Separate treatment with lidocaine, ropivacaine and bupivacaine at 0.05, 0.5, or 5 mM resulted in significant reductions in cell number, while lower concentrations of local anesthetics had no effect. Anesthetics inhibited the growth of HepG2 (Figure 1A) and BEL-7402 (Figure 1B) cells in a dose-dependent manner.

Ras association domain family 1A (RASSF1A) [28,29], a classical TSG, was found to interact with molecules such as CNK1 [33], Nore1 [34], MDM2 [35], and MAP1S [36] to induce cell death. Methylation of this TSG has been reported to silence its expression and promote the tumorigenesis of hepatocellular carcinoma [19-22] and breast cancers [27-29]. We evaluated the methylation levels of RASSF1A in HepG2 and BEL-7402 cells with lidocaine, ropivacaine and bupivacaine treatment separately. Figure 2A and B indicates the methylation level of this gene compared to that of the global genomic CpG islands in HepG2 (Figure 2A) and BEL-7402 (Figure 2B) cells; as shown in Figure 2A and B, 10 μM 5-aza-2'-deoxycytidine (DAC, a demethylation agent as a positive control) treatment for 48 h significantly reduced the methylation of the RASSF1A gene in HepG2 and BEL-7402 cells compared to that in the control (P < 0.05). To examine the influence of promoter demethylation in HepG2 and BEL-7402 cells, the expression of RASSF1A mRNA was examined using real-time quantitative PCR (RT-qPCR), and the expression of RASSF1A protein was assessed by western blotting. As shown in Figure 2C and D, there was a significant increase in RASSF1A mRNA levels either by 10 μM 5-aza-2'-deoxycytidine (P < 0.05) or by 0.5 mM lidocaine, ropivacaine or bupivacaine treatment for 48 h (P < 0.05, respectively). Furthermore, the western blot assay reconfirmed the upregulation of RASSF1A at the protein level by demethylation, which was promoted by 0.5 mM lidocaine, ropivacaine or bupivacaine separate treatment for 48 h in HepG2 (Figure 2E; P < 0.05) cells. Therefore, the demethylation of RASSF1A promotes the expression of this gene. 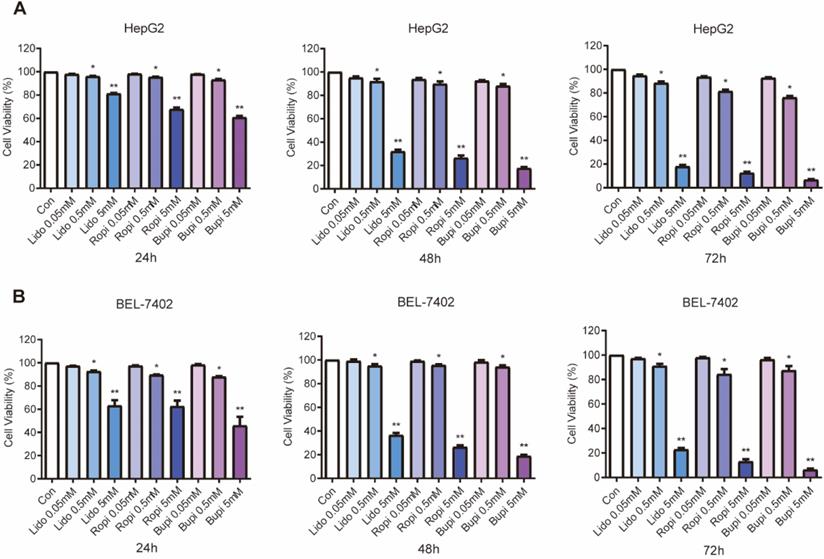 Cisplatin has been clinically utilized for hepatocellular carcinoma treatment for decades [27-29], and its antiproliferation effect has been confirmed to be abrogated [30] or enhanced [1, 31] by other molecules. To investigate the regulation of local anesthetics on the cisplatin-mediated antitumor effect, we evaluated the proliferation of HepG2 and BEL-7402 cells by CCK-8 assay after treatment with 0.5 mM of each local anesthetic separately, 10 μM cisplatin, or combinations of cisplatin and each anesthetic. It is shown in Figure 3A and B that HepG2 (Figure 3A) and BEL-7402 (Figure 3B) cells with or without the abovementioned treatment resulted in significant reductions in cell number (P < 0.05) and increases in cisplatin cytotoxicity (P < 0.01).

To further investigate the association of the local anesthetic-induced expression of RASSF1A with HepG2 cell proliferation inhibition, we analyzed RASSF1A expression in HepG2 cells without or with amide-type local anesthetics and/or cisplatin treatment by western blot assay (Figure 3C). The results showed that the protein expression level of RASSF1A was upregulated when 0.5 mM lidocaine, ropivacaine or bupivacaine were separately combined with cisplatin for 48 h in HepG2 cells (P < 0.01).

Studies have indicated that silencing of tumor suppressor genes (TSGs) by promoter methylation contributes to tumor development [9] that the inactivation of TSGs through the hypermethylation of the 5'-CpG islands in gene promoter regions induces processes such as uncontrolled cell growth, metastasis or apoptosis inhibition and also supports the maintenance of angiogenesis [9, 12]. As opposed to genetic alteration, epigenetic gene silencing through DNA hypermethylation is potentially reversible, and this presents new opportunities for the clinical management of malignant tumors. DAC (5-aza-2'-deoxycytidine), a demethylating agent, is currently being tested in clinical trials of cancer treatment. DNA demethylation by DAC effectively abolishes 17 β-estradiol-induced cell growth of human breast cancer cells [32]; DAC decreases the incidence of gastric cancers and inhibits their growth [33, 34]; miRNA-34b inhibits prostate cancer through demethylation, activating chromatin modifications [35]. However, the clinical utility of these drugs has not been fully realized because of their adverse effects, such as myelosuppression and mutagenicity [36]. The mechanisms of the antitumor effects of DNA demethylation agents still need to be clarified. 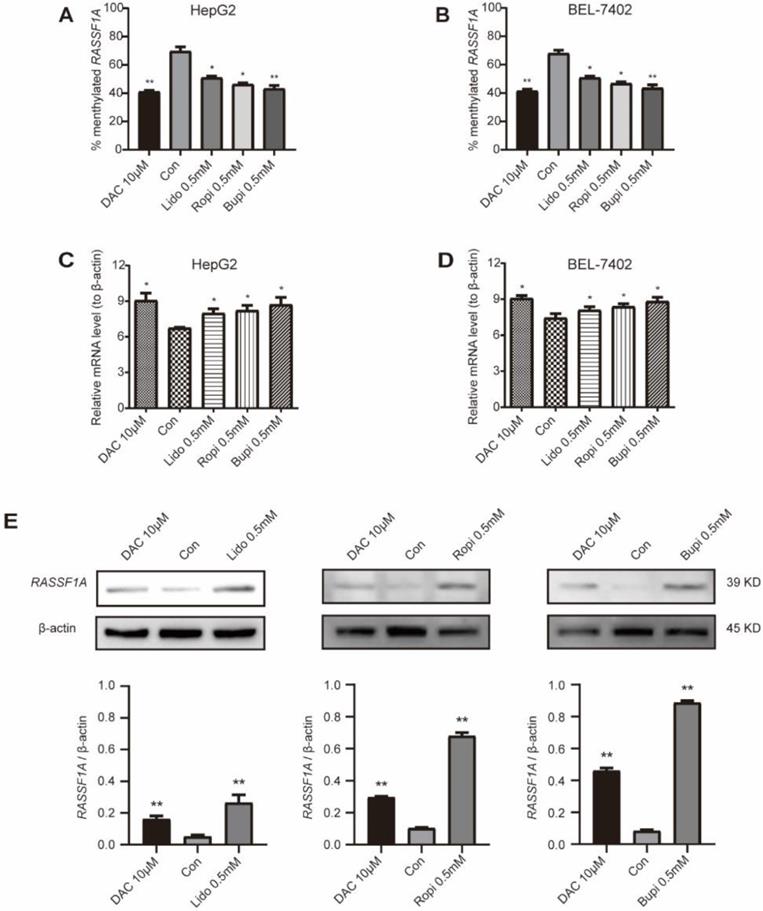 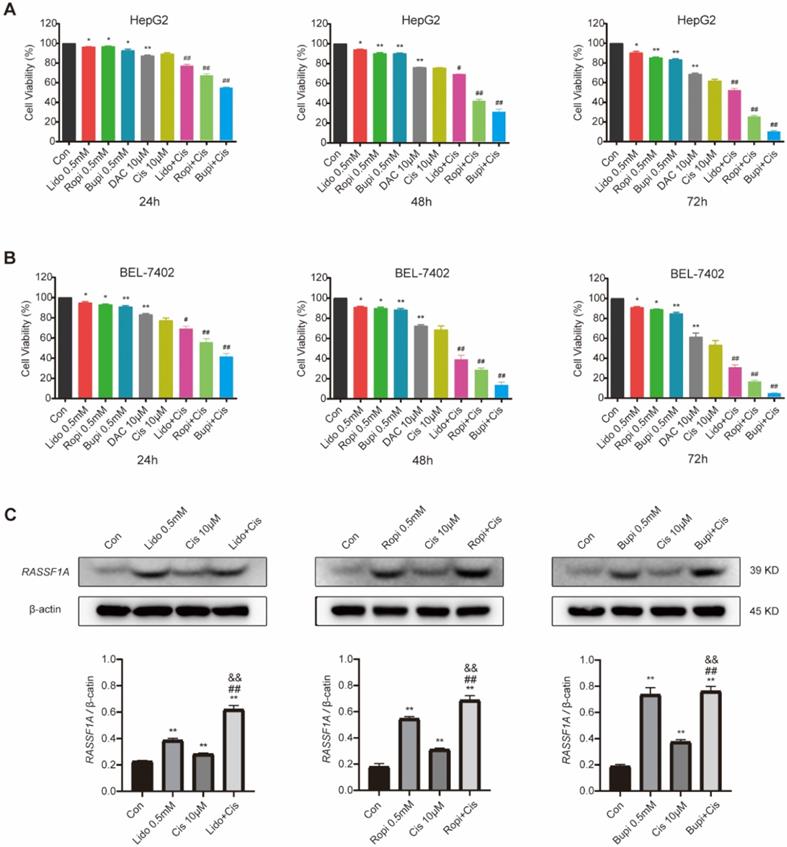 Recently, procaine, known as an ester-type local anesthetic, has been revealed to be a nonnucleoside inhibitor of DNA methylation and has a growth-inhibitory effect in human hepatoma cells [3]. Lidocaine, known as an amide-type local anesthetic, has been indicated to promote DNA demethylation [8, 37] and increase the cytotoxicity of cisplatin in breast cancer cells via upregulation of RASSF1A demethylation [8]. In our previous study, we demonstrated that lidocaine may exert potential antitumor activity and enhance the sensitivity of hepatocellular carcinoma to cisplatin in vitro and in vivo [1].

In the current study, we first used the CCK-8 assay to investigate whether amide-type local anesthetics (lidocaine, ropivacaine and bupivacaine) reduced the viability of human hepatoma cells. Treatment with 0.05, 0.5, or 5 mM lidocaine, ropivacaine or bupivacaine led to a decrease in viable HepG2 and BEL-7402 cells, and the local anesthetics reduced the cell viability in a dose-dependent manner in these cells.

Ras association domain family 1A (RASSF1A), a well-recognized tumor suppressive gene in various types of tumors, is a putative tumor suppressor gene located on the 3p21.3 locus [38-40]. The hypermethylation of CpG islands in RASSF1A occurs in a large percentage of human hepatocellular carcinomas [19-22].

This work was supported by grants from the National Natural Science Foundation of China (grant 81702394 to WX and grant 81902490 to DTC).

20. Retraction Note to. Role of RASSF1A promoter methylation in the pathogenesis of hepatocellular carcinoma: a meta-analysis of 21 cohort studies. Mol Biol Rep. 2015;42:1453