Conclusions: Despite its association with aggressive tumor features, PD-L1 expression on stromal immune cells emerged as a positive prognostic biomarker in breast cancer. This pro-survival effect might reflect the presence of a strong antitumor immune response that leads to PD-L1 expression.

Numerous recent studies have focused on the host immune system and its relationship with tumor progression in a variety of solid tumors, including breast cancer. One of the most important immune pathways is the programmed cell death 1 (PD-1)/programmed cell death ligand 1 (PD-L1) pathway.

PD-1, which belongs to the B7-CD28 superfamily, is involved in T cell regulation, and functions as a negative regulator of the immune system, resulting in reduced proliferation of activated CD8+ T cells. PD-L1 is expressed in some tumor cells and in activated B cells, T cells, dendritic cells, macrophages, and fibroblastic cells.[1] PD-L1 binding to PD-1 attenuates the cellular immune response by inducing T-cell apoptosis or exhaustion. PD-L1 plays an important role in tumor immune escape by facilitating PD-1/PD-L1 pathway activation.[2]

It has been shown that PD-L1 is expressed in several malignancies, including breast cancer.[3] In addition, it has been suggested that higher PD-L1 expression in tumor cell membrane versus stromal immune cells is associated with different clinicopathological features and clinical outcomes in multiple different tumor types. Although PD-L1 expression can be evaluated in both tumor cells and stromal immune cells in breast cancer, the implications of differences in expression between these two compartments remain unclear.

Tumor samples were collected from 233 female patients with stage I, II, or III breast cancer between 2013 and 2018 at Kangnam Sacred Heart Hospital, Hallym University, Seoul, Korea. Patients that satisfied the following selection criteria were included: (1) those who underwent primary resection; (2) those with no prior treatment; and (3) those with available, complete medical records, including pathologic slides and paraffin blocks of resected specimens. Diagnosis and histological differentiation were performed according to World Health Organization classifications. Staging was based on the American Joint Committee on Cancer staging system (eighth edition).

For TMA construction, all hematoxylin and eosin (H&E)-stained slides were reviewed, and representative areas were carefully selected. Each paraffin-embedded block relevant to H&E-stained slides was punched out using a TMA manufacturing tool (Quick-Ray; Unitma, Seoul, South Korea) and placed into a recipient paraffin block. Three separate tissue cores (2 mm in diameter) were obtained from each tumor specimen.

Immunohistochemical detection of PD-L1 and CD8, the latter of which is a marker of tumor-infiltrating lymphocytes (TILs), was performed on 4-μm-thick whole-tissue and TMA sections using an automated immunostainer, according to the manufacturer's protocol (BenchMark XT; Ventana Medical Systems, Tucson, AZ, USA). Appropriate positive and negative controls were included in each run, and all immunohistochemically stained slides were interpreted by a single investigator (ME Hong). Signals were visualized using an Optiview DAB IHC detection kit and Optiview Amplification kit (Ventana).

Associations of PD-L1 expression in tumor and stromal immune cells with categorical variables were tested by chi-square test. Survival was analyzed using Kaplan-Meier survival curves and log-rank tests, and multivariate analyses of survival were performed using Cox regression analysis. Disease-free survival (DFS) was measured from the date of surgery to the date of local recurrence or distant metastasis. Statistical analyses were carried out using SPSS software (version 24; IBM, Armonk, NY, USA), and a P-value < 0.05 was considered statistically significant.

Tumors from 233 patients for which tumor samples and adequate clinical data were available for evaluation of PD-L1 expression in both tumor cells and stromal immune cells were assessed. The age of patients at the time of diagnosis ranged from 23 to 82 years (median, 52.5 years). The median follow-up was 45 months (1-82 months). Among the 233 patients, all of which were free of systemic metastasis at initial presentation, 15 (6.4%) developed recurrence. Patients and tumor characteristics are described in Table 1. 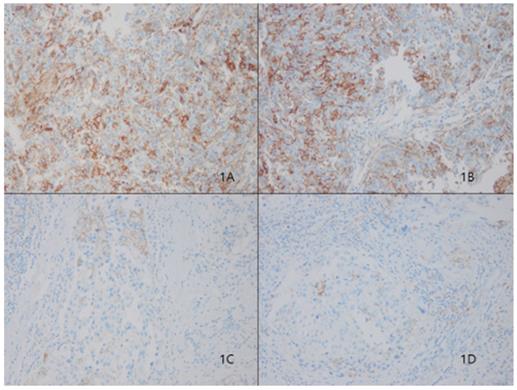 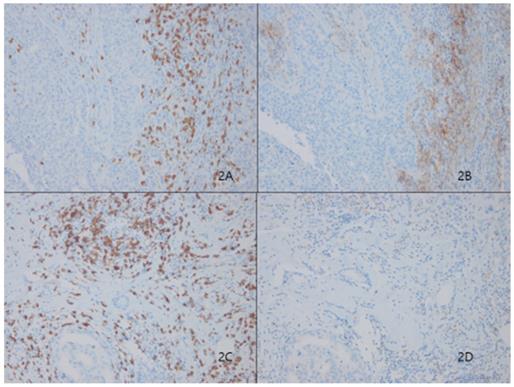 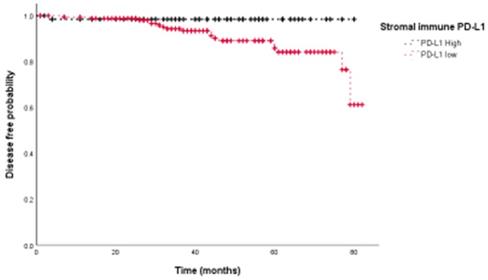 We demonstrated that stromal immune cell, but not tumoral, PD-L1 expression is associated with a favorable prognostic outcome, measured as DFS, in breast cancer patients.

PD-L1 expression in the tumor epithelium was less frequent than that in stromal immune cells, and both tumoral and stromal immune cell PD-L1 expression was predominantly associated with features of aggressive tumor biology, including higher HG as well as negative ER, negative PR, and positive HER2 status. A meta-analysis by Zhang et al [5] also showed that PD-L1 expression is associated with positive lymph node metastasis, higher HG, ER-negativity and triple-negative breast cancer (TNBC) subtype. A possible explanation for this observation is that higher expression of PD-L1 may reflect activation of the PD1/PD-L1 immune checkpoint pathway, leading to immune evasion processes and, ultimately, increased tumor aggressiveness.[6]

Interestingly, despite the association of positive stromal immune PD-L1 expression with aggressive tumor factors, patients with this expression profile showed improved DFS. The relationship between PD-L1 expression and prognosis remains unclear in breast cancer patients. Some studies have reported that positive PD-L1 status is associated with significantly improved overall survival [7, 8], but other studies have not confirmed this finding.[9-11] It has also been reported that increased PD-L1 expression is a favorable prognostic factor in patients with non-small-cell lung cancer (NSCLC) [12], small-cell lung cancer [13], gastric cancer [14], pancreatic cancer [15] and tonsillar cancer.[16] It has been speculated that, while PD-L1 mediates immune invasion[2] and would thus be expected to show an association with poor prognosis, expression of PD‑L1 by stromal immune cells may be ineffective in suppressing the immune response and may merely reflect infiltration by lymphocytes, which are associated with a generally good outcome in several malignancies, including breast cancer.[17] Several studies have described prominent immune cell infiltration, such that tumor-infiltrating lymphocytes (TILs) are associated with PD-L1 expression in breast cancer.[18] It is possible that PD-L1 expression is associated with a TIL-mediated antitumor inflammatory response rather than tumor immune evasion.

While tumoral membranous expression of PD-L1 is often used as the criterion for PD-L1 positivity in cancers, such as NSCLC,[19] renal cell carcinoma[20] and melanoma,[21] we found no association between tumoral PD-L1 expression and outcome. In contrast, Thompson et al.[22] reported that both tumoral and stromal PD-L1 expression were associated with worse outcomes in patients with locally advanced stomach cancer. The contrasting reports of the impact of tumoral and stromal PD-L1 expression on survival between our breast cancer patients and the gastric cancer cohort of Thompson et al. suggest that interactions between tumors and tumor-associated stroma might differ among various cancer types. Stromal immune cell expression of PD-L1 in breast cancer has not been well documented in other studies. To date, the precise mechanism by which PD-L1 expression on stromal cells exerts antitumoral effects within the tumor microenvironment remains elusive.[23]

In addition, a consideration of specific breast cancer subtype suggests that PD‑L1 expression may retain a positive prognostic role only in the basal subtype. Loi et al. [24] commented on the consistency of positive associations between TILs in primary TNBC and prognosis in three clinical trials, concluding that immunity is important for the outcome of primary TNBC.

Limitations of our study include the small number of patients and its retrospective, single-center design. There is no established consensus regarding PD-L1 scoring, and considerable heterogeneity exists in PD-L1 antibodies used for immunohistochemical staining across studies. Strengths include that this is one of the first studies to describe the importance of stromal PD-L1 expression in favorable prognostic outcomes in breast cancer patients. Future large-scale studies will be necessary to evaluate the biological and clinical implications of differential expression of PD-L1 by tumor cells and stromal immune cells.

In conclusion, our results indicate that PD-L1 expression on stromal immune cells is associated with favorable prognostic outcome, specifically DFS, in breast cancer. PD-L1 expression was significantly associated with a series of unfavorable clinicopathological parameters, including higher HG, higher Ki67, ER and PR negativity and positive HER2 status. This information may be helpful to clinicians attempting to screen candidates for anti PD-1/PD-L1 therapy.

All procedures performed in this study involving human participants were in accordance with the ethical standards of the institutional research committee (HKS 2018-10-011) and with the 1964 Helsinki declaration and its later amendments or comparable ethical standards. This article does not contain any studies with animals performed by any of the authors.