Materials & Methods: We retrospectively reviewed 1,151 patients with mRCC who were treated with first-line TKI from December 2006 to September 2016. After excluding 135 patients, 1,016 patients with mRCC were finally analyzed. The primary and secondary end points were overall survival (OS) and progression-free survival (PFS), respectively. After 1:1 PSM analysis, survival outcomes were compared between patients with BM (n=237) and without BM (n=237). Multivariate Cox regression analysis was used to determine predictors of survival.

Results: Among 1,016 total patients, 27.5% (n=279) had BM. Before PSM, patients with BM had worse OS outcomes than those without BM. Even after PSM, OS was significantly poorer in patients with BM compared to those without BM. Of note, the presence of BM was identified as an independent predictor of OS (HR=1.36), in addition to prior nephrectomy, sarcomatoid differentiation, and IMDC risk group. However, there were no differences in PFS according to the presence of BM after PSM. In the subgroup analysis, only intermediate IMDC risk group showed significant differences in OS according to the presence of BM.

Conclusion: Based on PSM analysis, the presence of BM negatively affected OS outcomes in patients with mRCC treated with first-line TKI, particularly in the IMDC intermediate risk group.

Renal cell carcinoma (RCC) is usually diagnosed as an incidental finding due to advanced imaging methods. However, approximately 15 to 30% of patients have metastatic disease at initial diagnosis [1]. The five-year survival rate of patients with metastatic RCC (mRCC) is only 10% [2]. Lung is the most common metastatic site, and bone is the second most common metastatic site, accounting for 30% of all metastatic lesions [3]. Because bone metastasis (BM) is mainly an osteolytic process in RCC, it compromises bone integrity and frequently causes skeletal-related events (SRE) such as pain, pathologic fracture, spinal cord compression, and hypercalcemia [4]. Therefore, the presence of BM is significantly associated with disease prognosis and quality of life in patients with mRCC [4].

Here, we examined the impact of BM on survival outcomes in more than 1,000 patients with mRCC who underwent first-line targeted therapy by performing propensity-score matching (PSM) analysis.

A total of 1,151 cases of mRCC in patients treated with first-line tyrosine kinase inhibitor (TKI) at Samsung Medical Center and Asan Medical Center from December 2006 to September 2016 were retrospectively collected. The electronic medical records of these patients were reviewed. All patients had measurable metastatic lesions on either computed-tomography (CT) scan or magnetic resonance imaging (MRI) and bone scan. After 135 patients were excluded from the analysis due to insufficient clinical data regarding metastatic lesions or choice of therapeutic options, 1,016 patients with mRCC were finally included in the analysis.

To reduce the selection bias of this retrospective study, PSM was performed depending on the presence of BM. Propensity-scores were calculated using a logistic regression model including the following variables: age, sex, metastasis type, IMDC risk classification, prior nephrectomy, single or multiple metastasis, histology type, Fuhrman nuclear grade, presence of sarcomatoid component, and type of TKI. Thereafter, the nearest neighbor 1:1 matching method was adopted without replacement. Adequate balance was achieved after PSM, as shown in Supplementary Figure S1. Each of the 237 patients was assigned 1:1, and the results before and after matching were compared to ensure consistency of the results. Additionally, subgroup analysis of OS estimates was also carried out according to IMDC classification after PSM.

The clinicopathologic characteristics of the total 1,016 patients are demonstrated in Table S1. Among these, 27.5% (n=279) patients had BM with or without other distant metastases. Of these patients, 23.0%, 62.0%, and 14.0% of patients had favorable, intermediate, and poor IMDC risk classification, respectively. Before PSM, more patients with BM had synchronous metastases (65.6% versus 51.3%, P<0.001) and multiple metastases (75.6% versus 48.8%, P<0.001) than patients without BM. In addition, patients with BM showed a higher proportion of poor IMDC risk classification than those without BM (21.1% versus 11.3%, P<0.001). After performing PSM, there were no significant differences in clinicopathologic parameters of patients with and without BM (Table 1).

In subgroup analysis, the prognostic significance of BM was examined according to IMDC risk classification. Interestingly, the presence of BM resulted in poor OS outcomes only in the intermediate risk group after PSM (Figure 3B). The median OS of patients with BM was seven months shorter than the median OS of patients without BM (14.0 versus 21.0 months, Log-rank P=0.039), and the presence of BM significantly increased the risk of any cause of death (HR = 1.30, 95% CI = 1.01 - 1.69). However, there were no statistically significant differences in OS estimates between patients with and without BM both in favorable and poor IMDC risk groups (Figure 3A and 3C, respectively).

Kaplan Meier analysis estimating overall survivals (A) before and (B) after propensity-score matching according to presence of bone metastasis in patients with metastatic renal cell carcinoma.

Kaplan Meier analysis estimating progression-free survivals (A) before and (B) after propensity-score matching according to presence of bone metastasis in patients with metastatic renal cell carcinoma. 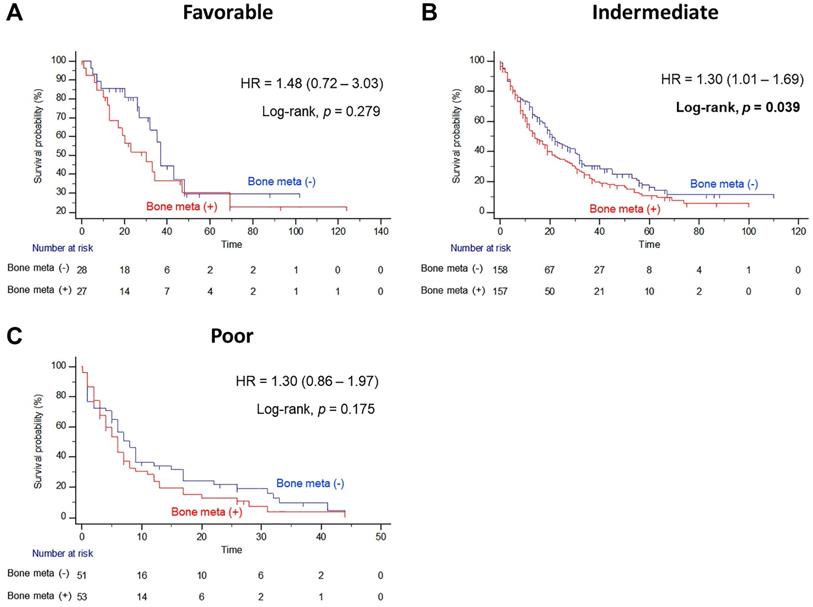 The reason for poor survival outcomes in patients with BM has been suggested as follows: Interactions between cancer cells and the tumor microenvironment, particularly the bone microenvironment, can result in bone destruction and rapid tumor growth [4]. In addition, TKI has limited distribution to bone, compromising the anti-tumor effects on BM [14, 15]. Despite several studies revealing that BM is associated with higher risk of morbidity and shorter survival in patients with mRCC, study population heterogeneity was a critical drawback [5-12]. Moreover, there are no standard therapeutic guidelines or prognostic systems for patients with BM. Thus, decision-making for these patients is largely determined empirically [16]. The prognostic impact of BM on survival outcomes in patients with mRCC still remains an open question. Of note, our study adds new evidence supporting that the presence of BM is associated with significant negative impact on OS, but not PFS.

The proportion of BM in our series was approximately 27%, which is similar to other reports indicating BM metastases as comprising one third of all metastatic sites. However, median OS was 14 months and 12 months before and after PSM, respectively, which was shorter than in other studies. Ruatta et al [9] analyzed 300 patients with BM among 1,750 patients with mRCC and showed that median OS was 23.3 months. Particularly, they highlighted that patients with a solitary bone lesion had a longer survival than patients with multiple BMs (27.7, 18.2 and 9.2 months in patients with one, two to five and more than 5 BMs, respectively, P<0.0001) [9]. Although we also found that patients with solitary BM had longer median OS than those with concomitant BM (23 versus 14 months), the negative impact of BM was more profound in our series. This discrepancy can be explained by the heterogeneity of study population. Because we could not evaluate the distribution of the number of BM, patients may have various degree of tumor burden. This type of heterogeneity can influence the survival outcomes.

Interestingly, our data showed that the prognostic impact of BM was only significant in the population with intermediate IMDC risk classification. In this subgroup, median OS of patients with BM was 7 months shorter than those without BM (14.0 versus 21.0 months), and the presence of BM significantly increased the risk of any cause of death (HR = 1.30). Conversely, there were no statistically significant differences in OS estimates for patients with and without BM either in favorable or poor IMDC risk groups, regardless of PSM. McKay et al [17] reported that favorable and intermediate risk groups with BM had shorter OS and time to treatment failure. The authors showed that the presence of BM was an independent predictor for poor OS outcome when classified by IMDC risk criteria. In a study by Ruatta and colleagues, the MSKCC risk score was also associated with OS (HR = 0.50; 95% CI=0.38 - 0.67). In a study by Kalra et al [18], higher MSKCC risk score was an independent predictor of shorter OS in data from 375 patients with mRCC and BM (HR = 1.38; 95% CI, 1.02-1.91). Because the number of cases in a favorable and poor risk group is too low in our study, we should consider that the impact of BM on the survival outcomes could be underestimated in these population.

Other key finding of the present study is that patients with solitary BM had significantly worse OS outcomes than those with other solitary metastases. This result has various possible explanations, including different metastatic burden, different tumor biology, and tumor heterogeneity. Both the temporal and spatial patterns of distant metastasis are highly variable in patients with RCC [19]. Metastatic patterns vary from indolent, step-wise spreading of single or oligometastatic sites with prolonged periods of latency between initial and subsequent events to highly aggressive early and systemic dissemination within months after surgery with curative intent [19]. The local interplay between cancer cells and the bone environment with BM may contribute to progression of skeletal metastasis [4]. Particularly, osteoclasts play a key role in the bone destruction of metastatic osteolytic lesions [20]. Activated osteoclasts destroy bone integrity and release various cytokines and growth factors, including bone morphogenetic proteins, insulin-like growth factor, and transforming-growth factor-ß, which stimulate tumor cell proliferation [20, 21].

We acknowledge several limitations of our study. First, our data were retrospectively collected and reviewed. Despite the consecutive enrollment of patients, there is potential risk of selection and misclassification bias. Second, there were no data about the effects of palliative local treatments, such as metastasectomy and SBRT (stereotactic body radiation therapy), as well as the use of bone-targeting agents, such as bisphosphonates and denosumab (the receptor activator of nuclear factor kappa-B ligand). Actually, metastasis-directed therapy can be helpful for the patients with solitary or oligometastatic BMs. In the study by Sun and colleagues, patients treated by metastasectomy had a better survival outcome compared to those who did not underwent metastasectomy [22]. In addition, SBRT has been reported to be safe and feasible in patients with oligometastasis, particularly with high local control rate more than 90% [23]. Third, our data did not provide information regarding accurate tumor burden and involved sites of BM. As previously described, the study by Ruatta et al [9] showed that patients with a solitary BM had a better prognosis compared to those with multiple BMs. Furthermore, the location of BMs had a prognostic impact on survival in patients with BM, and patients with long bone metastasis had a longer survival than patients with spinal column or sacrum metastases [9]. Finally, although cabozantinib treatment showed better clinical benefits in mRCC patients with BM after previous VEGFR targeted therapy [24], we could not assess the effects of cabozantinib in the current study because the study was performed in patients prior to FDA approval of cabozantinib in our country. Therefore, we only focused on the population who received first-line TKI therapy in this study.

This study was approved by the Institutional Review Board (IRB) of our institution (approval number: 2019-09-080-001). All data were anonymized before conducting the statistical analysis. The IRB waived the requirement to obtain informed consent from patients due to the retrospective nature of this study.