The incidence rate of skin tumours for both non-melanoma and melanoma is rapidly increasing. Solar radiation, as well as long-term exposure to ultraviolet (UV-B) radiation, has the greatest impact on development of these skin tumours [1]. Non-melanoma skin tumours, including basal cell carcinoma (BCC) and squamous cell carcinoma (SCC), usually develop on chronically photo-exposed skin areas. Patients who suffer from SCC metastasis have a poor prognosis due to the low survival rate over 10 years [2-4]. SCC can metastasise to distant organs and is usually refractory to conventional therapy [5]. Upon UV-B radiation, cyclobutane pyrimidine dimers (CPDs) form within cells and cause C-T or CC-TT replacements that result in signature p53 mutations [6, 7]. The DNA damage could also result from reactive oxygen species produced during UV-B radiation. The oncogenic processes of UV treatment involve immune suppression, inactivation of tumour suppressor p53 and/or phosphatase and tensin homolog (Pten), and activation of Ras oncogene [8]. However, the underlying cellular mechanisms that drive the UV-induced tumour progression are not well known. Here, we used a mouse model with UV-radiated skin tumours, which resemble malignant human SCC and provided an accessible model to mimic the processes of human tumour initiation and growth.

Cancer-initiating cells are believed to be the driving force for cancer progression, metastasis and relapse after therapy [9]. The development of therapeutic strategies that target cancer-initiating cells depends on the characterisation of cell surface markers. Within the tumour tissues, various cell populations with different gene expression profiles can be identified. Among these cells, the long-lived epidermal cancer-initiating cells may be the origin of SCC under tumourigenic events such as human papilloma virus (HPV) infection, UV-radiation and/or chemical carcinogen treatments [10]. Bulge stem cells and other epidermal lineages can induce papilloma or malignant tumours depending on various genetic hits [11]. Even though there are multiple identified cancer-initiating markers, these parameters can differ among cancer types. Most of the identified cell surface markers suggest that cancer-initiating cells originate from embryonic or adult stem cells via the accumulation of epigenetic and genetic alterations [12]. Recently, both Lgr5 and Lgr6 were reported to be epithelial stem cell markers in SCC [13, 14].

To establish a UV-induced SCC model, 28 FVB female mice aged 6-8 weeks were housed in a standard animal facility at the university. All animal experiments were conducted according to the guidelines for animal experimentation at Wuhan University. This project was approved by the Ethic Committee of Zhongnan Hospital of Wuhan University (IACUCU2019022). All animals had their backs shaved with electric clippers, placed in the pre-designed cage with the UV-lamp installed above, and irradiated on the back with a 180 mJ/cm2 UV dosage for 20 min each day for the first week. Each mouse was kept in a position that only the dorsal shaved surface was exposed to UV-light and tumour was appearing only in this site. The lamps used in the study were TL 40W/01 RS UVB-Narrowband from Phillips and the predominant wavelength was between 300 and 315 nm with a peak at 311 nm. Subsequently, an 80 mJ/ cm2 UV dosage was applied two times per week for 8 months or until the tumours reached a maximum size of 1.5-2.5 cm.

To induce secondary tumours, immunodeficient NMRI female mice were subjected to a subcutaneous transplant into an area that overlaid the front/hind flank with equal number of flow-cytometry sorted cells (1 × 103 cells per site) in a volume of 100 µl phosphate-buffered saline (PBS, pH 7.2). Tumours were observed and measured every week. Mice were sacrificed when tumours reached 1.0-1.2 cm, or a maximum of 10 weeks post-transplantation.

Tumour tissues were cut and digested by incubation with 0.25% trypsin for 20 min. Viable cells were examined using 0.4% trypan blue. Cells were kept in 10% Dulbecco's Modified Eagle Medium (DMEM) with 10% foetal bovine serum (FBS) filtered with a 0.45 µm filter. The cells were subsequently stained with phycoerythrin (PE)-conjugated rat anti-mouse α6-integrin antibody (1:50, BD Bioscience, USA), FITC-conjugated rat anti-mouse CD34 antibody (1:30, BD Bioscience, USA), or IgG control anti-mouse antibody for 45 min in the dark at 4°C. After washing, the appropriate amount of cell preparations were sorted based on the α6-integrin and CD34 expression status using a FACS Aria cell sorter (BD Bioscience, USA). The live cell population gate was estimated using forward and side scatter positioning, which was further confirmed by propidium iodide (PI) staining. A 488 nm laser was used to detect fluorescein isothiocyanate (FITC) with a 530/30 filter and a 532 nm laser for PE with 575/25 filter.

Immunostaining was performed with frozen tissue sections as previously described. Tissues were fixed in methanol at -20°C for 20 min. After blocking with PBS with 3% FBS, tissues were incubated with anti-BrdU antibody (1:50, abcam, USA) and/or anti-CD34 antibody (1:10, abcam, USA) for 60 min at room temperature. Fluorescently labelled anti-rabbit (1:200, abcam, USA) or anti-goat antibody (1:200, abcam, USA) was incubated with the tissues for 45 min. After washing four times with PBS, the slides were mounted with Mountshield that contained with DAPI. Fluorescent images were captured and processed using the Olympus BX41 microscopic imaging system (Center Valley, PA, USA).

NIH3T3 (1 × 106 cells) cells were freshly seeded onto 60 mm dishes in DMEM supplemented with 10% FBS for 2 days. To prevent NIH3T3 cell proliferation, mitomycin was used to treat the cells before seeding the tumour cells. Approximately 1 × 102 flow-cytometry-sorted tumour cells were seeded into each well. After 10-14 days of culturing, dead cells were washed away, and clusters of cells were imaged and counted under a microscope. For the soft agar assay, 1 × 102 tumour cells (isolated from animals) were plated in each well with 4 ml 0.4% agarose (SeaPlaque, BioProducts, Rockland, ME, USA) in DMEM supplemented with 10% FBS. The cells were grown for 3 weeks at 37°C with 5% CO2, and the colonies were stained and counted under the microscope.

Statistical analysis was performed using Student's t-test or analysis of variance (ANOVA) followed by Dunnett's t-test. Results are presented as mean ± standard error of the mean (SEM). For all tests, P < 0.05 was accepted as statistically significant.

To generate a UV-B induced skin cancer model, FVB mice were irradiated for up to 30 weeks. Three mice developed small tumours as early as 4.5 months after radiation, and all mice developed SCC after 8 months irradiation (Fig. 1A-B). Most of the SCC mice appeared to have a skin ulcer (Fig. 1C). In all cases, one tumour per mouse grew at the location exposed to UV irradiation; the animals were challenged with UV exposure until the tumour reached a maximum diameter of 1.5-2.5 cm (Fig. 1B). Haematoxylin and eosin staining confirmed the development of tumours including well differentiated and undifferentiated SCC (Fig. 1C). Long-term retaining cells (LRCs) in cancer tissues are recognised as cancer stem-like cells. To investigate the number of LRCs in the tumour, animals that were treated with UV-B for 8 months and developed SCC were injected with BrdU. The mice were sacrificed and tumours were further isolated after either 2 h, 10 days, or 30 days post-BrdU injection (Fig. 1D). The number of BrdU-positive cells was notably reduced from 2 h (12.1 ± 4.2%) to 10 days (4.9 ± 1.0%) to 30 days (0.30 ± 1%) after labelling (Fig. 1D). To further characterise the slow cycling tumour cells, tissue from tumours 10 days post-BrdU injection were stained for CD34 and BrdU. Approximately 80% of the BrdU-positive cells were indeed positive for CD34 (Fig. 2A-B and supplementary Fig. 1A). These results indicate that only a small fraction of tumour cells were slow-proliferative cells, which are defined as cells that retain BrdU 10 days or longer after BrdU injection. Most of the cancer cells proliferate quickly and lose the BrdU during the oncogenic processes.

Generation of UV-induced SCC model in mice. A. Skin tumour occurrence in mice after UV-B irradiation over a period of 8 months (n = 28). B. Tumour growth, as measured by tumour diameter, in mice treated with UV-B irradiation over a period of 8 months. C. Haematoxylin-eosin-stained representative images of tumours on the back of mice exposed to UV radiation. D. Immunofluorescence staining with BrdU (green) antibody in tumour tissue biopsied 2 h, 10 days and 30 days post-BrdU injection. Percentages of BrdU-positive cells in the tumour tissue (n = 3 for each time point) are shown in the right panel. 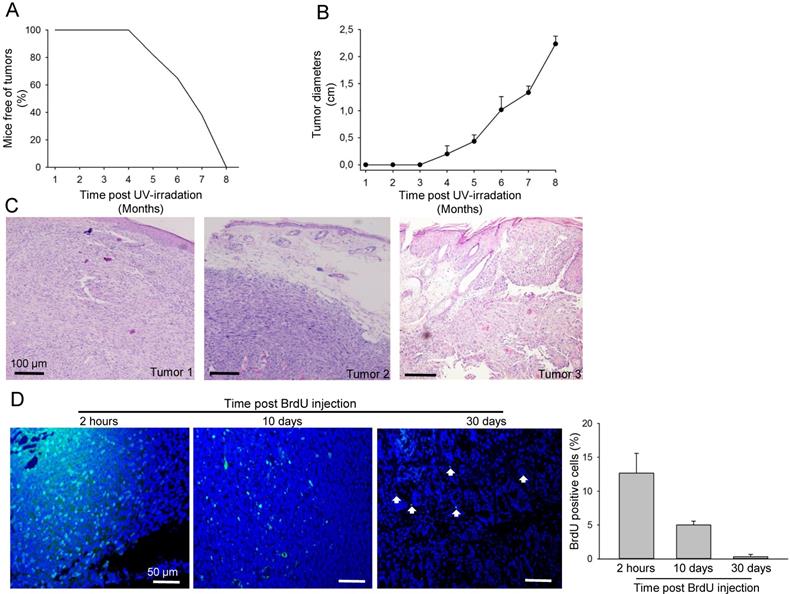 SCC is the second most common form of skin cancer. It represents 20% of non-melanoma skin cancer cases in humans and is associated with substantial risk of metastasis. Approximately 90% of non-melanoma skin cancers are associated with exposure to ultraviolet (UV) radiation from the sun [25]. This pathological situation can be mimicked in mice via chronic exposure to UV light. Lineage-tracing experiments have been used to evaluate the clonal growth of cancer initiating cells in skin squamous cell carcinomas [26, 27]. Cancer initiating cells are usually a small population within tumours that can sustain long-term tumour growth, self-renewal, and promote induced secondary tumours after transplantation. A previous study that used a chemical carcinogenesis protocol (DMBA/TPA) demonstrated that SCC cells enriched for CD34 more effectively produce secondary tumours upon transplantation compared to the CD34-negative cells [18]. Furthermore, CD34 null mice are resistant to SCC development using the DMBA-induced model [28]. In addition to CD34, α6β1-integrin represents another marker for cancer-initiating cells. DMBA/TPA-induced SCC cells with high α6β1-integrin expression more effectively propagate in transplantation studies compared to low-α6β1-expressing cells [19]. However, high α6β1-integrin expression promotes tumour-initiating abilities regardless of CD34 enrichment status.

In the present study, we examined whether cancer-initiating cells can be generated in UV-induced SCC in animals. UV exposure usually generates SCC within 4-7 months, which is longer than the time required for DMBA/TPA-induced tumours. Furthermore, UV-induced SCC tumours are usually easily transplantable and behave much more malignantly compared to chemical-induced skin cancer. The latter mostly generate benign papilloma. The majority of the slow-cycling BrdU-positive cells (i.e., BrdU positive 10 days post-injection) were CD34-positive cells. Previous research demonstrated that EdU is high in CD34high tumour cells in genetically modified malignant tumours[19]. Consistently, our data indicated that in the UV-induced SCC, both CD34 and slow-cycling BrdU-positive cells only represented a minor fraction (approximately 5%) of the tumour cells. 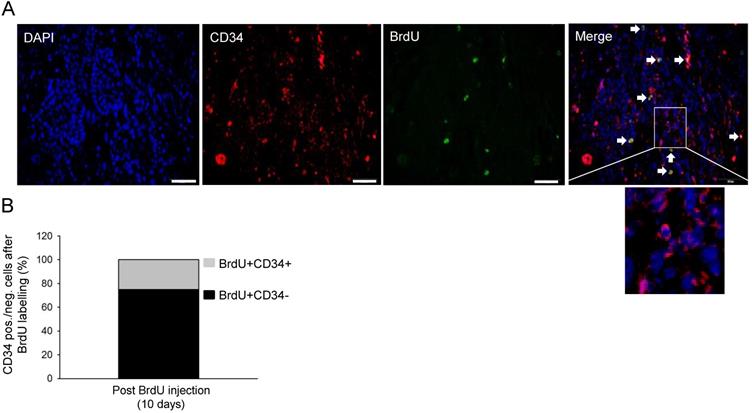 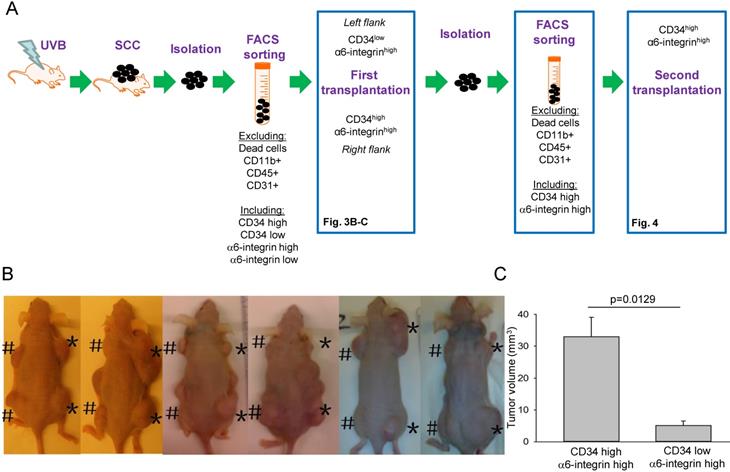 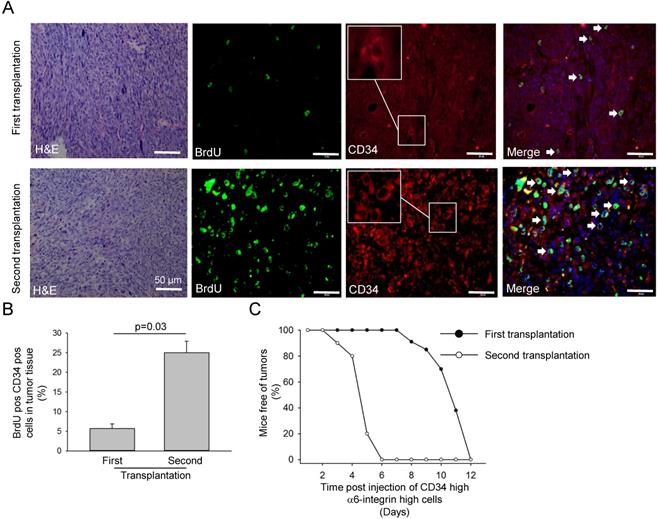 Epigenetic changes plays an important role in cancer initiating cells, there the component of poly-comb repressive complex 2 was required for epidermal cancer stem cell survival, migration, invasion, and tumour formation [29, 30]. Micro RNA 23 was also shown to be downregulated by the oncogene leading to expansion of cancer stem cells in skin carcinogenesis model [31]. The oncogenic Ras expression combined with p53 deletion in interfollicular epidermis/hair follicle lineages promotes development of different types of invasive SCC. These tumours were showing epithelial mesenchymal transition (EMT) features [11]. In another recent study, tumours originating from hair follicle could undergo EMT compared to interfollicular epidermis originating tumours [32]. In this aspect, chromatin and transcriptional profiling of these two different cell populations were the deciding factor in whether targeted onco-driven-cells developed into well-differentiated SCCs or more invasive tumours characterized by EMT [32]. Furthermore, it needs to be determined whether CD34highα6-integrinhigh cells are enriched with EMT-related gene signature.

Overall, our data suggest that expression of CD34high compared to CD34low isolated from UV-induced SCC could propagate effectively by exhibiting greater tumour initiating and self-renewal abilities. Future studies need to demonstrate whether additional cell surface markers such as β1 integrin and CD133 as well as skin cancer stem cell markers can enrich the population of the cancer initiating cells within CD34highα6-integrinhigh in SCC that has been arising from UV-induction.